Small-wave wizardry was only one of the skill sets needed for the opening day of the Ballito Pro, presented by Billabong, the first Qualifying Series 10,000-level event of the 2017 season. Versatility and a hell-bent intent to win was another.

Jeremy Flores personified these traits on opening day. Flores hasn't had the best season start on the Championship Tour (CT) thus far (17th) but a fired-up and hungry Jeremy is one of the most dangerous surfers on either tour. He was one of the standout surfers last year at the Ballito Pro, and he came into this event looking fit, determined and ready to blow up.

His performance in the final heat of the day, heat 4 of the second round, was dynamic in what was possibly one of the most loaded heats of the day. Flores rose to the occasion, banking a solid win by beating former event champion and former Championship Tour surfer Alejo Muniz from Brazil into second place, and losing Gony Zubizarreta from Spain and Luel Felipe from Brazil in the process. Felipe was involved in an interference with Zubizarreta and lost one of his high scoring rides from the tally and lost the heat in the process.

Flores however, put on a scintillating performance, reminiscent of last year where he simply mowed through the field in the excellent conditions that the Ballito Pro tournament enjoyed last year, where he placed third. Jeremy Flores is hungry and versatile and proved his worth in the small pockets of Ballito today. - WSL / Kelly Cestari

"I have been nursing a few injuries so far this year, and I'm still kinda nursing them now," said Flores after the heat. "I just figured that we're running 30- minute heats so I should be able to get those 2 waves in thirty minutes."

When asked about Ballito, Flores warmed to the place. "Reunion is just over there, you know," said Flores, pointing out to sea. "So Ballito is a very familiar place for me and I have some family here, so I am very comfortable when I visit here."

His performance as mentioned, was inspired. Muniz was also determined to get through, and to continue his campaign to get back onto the CT. He was trailing in the last few minutes before bouncing back into the top two and leaving the other two heading for the airport. After a little confusion in the early minutes of the heat Luel Felipe interfered with Zubizarreta, and lost one of his high-scoring rides, so he started going for broke towards the end of the heat, choosing a Superman Air as his single-move heat winner. But it wasn't to be, and he never completed the moves -- to the disappointment of himself and the judges.

The local wildcard and SSA Ballito Trials presented by Billabong winner Richie Kidd started the day looking good, but was eventually outpointed in round two. Other standouts included Mikey February who is currently the highest placed South African on the QS tour, and at 21st has an even chance of qualifying if he posts a big result here. Mikey has matured remarkably as a contest surfer over the last few months and surfed a smart heat. His improvement is possibly due to the increased number of WSL events in South Africa. For the first time in many years there is a flourishing local circuit, and "MFeb," as he is known in South Africa, was the winner of the Nelson Mandela Bay Surf Pro 1,000, the Corona Durban Surf Pro 1,000 and the Vans Surf Pro Classic 1,000, all of which took place earlier this year. 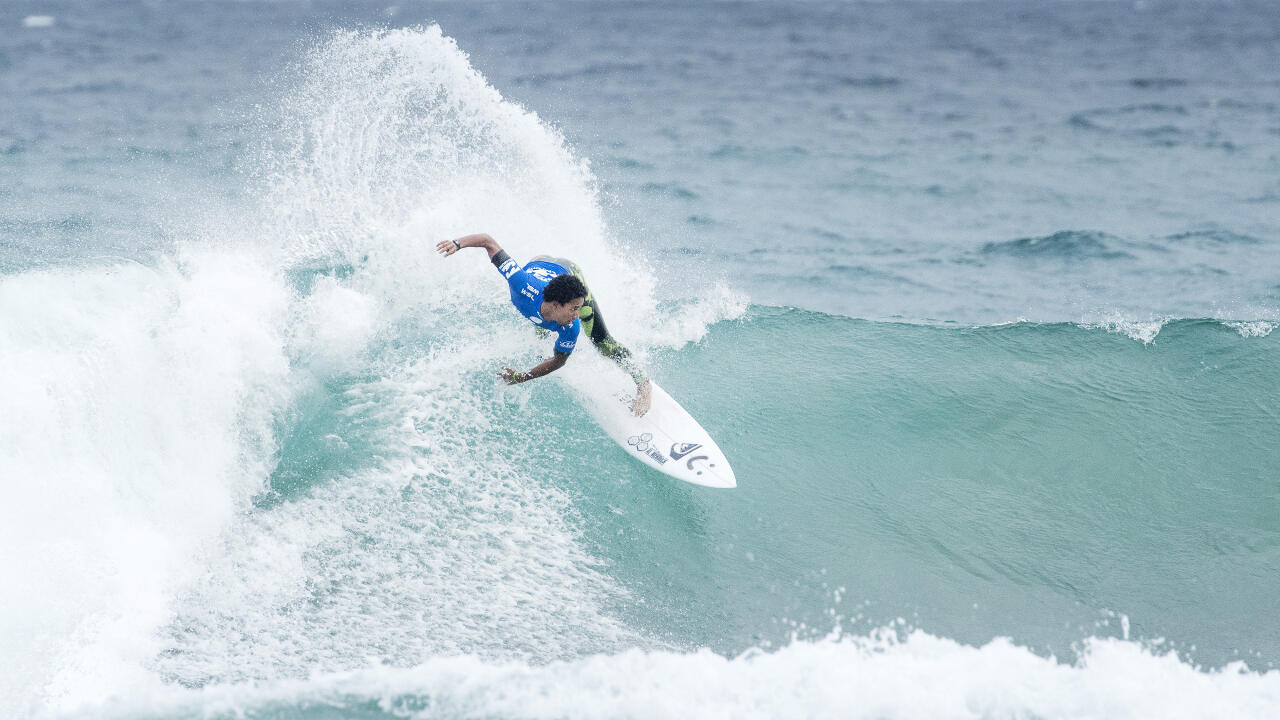 Brazilian surfer Krystian Kymerson also impressed, especially with his single-move punt in heat one of round two, advancing along with February. His move was a big forehand boost into the howling southwesterly, that culminated with a technical landing and a 9-point score for the move.

Our current QS leader Jesse Mendes from Brazil put on a definitive performance in round two as well, with Hiroto Ohhara, advancing in second and Kidd and Brazilian Robson Santos eliminated from the event. Krystian Kymerson and a solid forehand punt to the next round. - WSL / Kelly Cestari

Mendes also showed steely-eyed calmness in his heat, putting away all the stress to one side.

"I started off the heat and I was pretty stressed," said a relaxed Mendes of his performance. "I didn't have priority and I needed a wave, and then a big set came through and washed us around a bit. After the set I was sitting further in than the surfer with priority. A wave presented itself and it was inside of the guy with priority, perfect for me. It was the wave that I got a 7 on, but more importantly it was the wave I found my rhythm on. I then got the 8-point score and then the 8 point 5."

When asked about his incredible start to the season on the QS and his huge points lead, he said, "I'm just working on myself, and if it works out for me or not, it's just the work of God, and I'm going to keep doing what I've been doing." Humble and self-effacing in victory, Jesse Mendes has become a popular contestant, and has his eyes firmly on the Championship Tour 2018. - WSL / Kelly Cestari

There is much talk of a really good forecast on the map, and Ballito could fire over the next few days. With this in mind, Commissioner Logie called it stumps after the fourth heat of Round Two, with much excitement lingering for tomorrow.

The winner of The Four Seasons Maldives Surfing Champions Trophy be a master of singles, twins and thrusters.