The beautiful cliffs at Playa Revolcadero provide a stunning backdrop for competitors such as Derek Gomes at the Powerade Surf Open Acapulco -- which now has its Quarterfinal draws set after a critical day of competition. - WSL / Andrew Nichols

For the youth of the Qualifying Series (QS) there are events that can be taken full advantage of to get vital experience and even some points to help their seeding cause -- i.e. the Powerade Surf Open Acapulco QS1,000. This event provides powerful waves, a tricky lineup, and a hungry field of competitors to wade through for points on offer.

Today witnessed just that as the next generation of QS warriors showcased their potential of surfing with technical barrel riding and powerful rail game. 19-year-old Nolan Rapoza locked into a bomb and navigated the exit for a last-second heat win. - WSL / Andrew Nichols

Nolan Rapoza began his day with the heaviest barrel ride thus far at Playa Revolcadero and narrowly escaped the curtain as it came down on him. That buzzer-beating ride earned him an 8.93 and passage into Round Four where another nail-biting performance awaited. The Long Beach, California native found yet another cover up before laying his rail to solidify a place into the Quarterfinals with only minutes remaining.

"Every heat I've had a tough start, but in that Round Four heat I was able to pull some turns down and get some scores," Rapoza said. "There's so much going on with a lot of closeouts, the [scorching] heat and the current, you can loose track of your heat strategy so if you see a corner your instinct is to just go. It feels great to make heats and I'm feeling confident, a big result here would be huge for me." But, it was Puerto Escondido, Mexico native Jafet Ramos who earned runner-up behind Rapoza over the favored, International Surfing Association (ISA) Gold Medalist Jhonny Corzo with clutch surfing. Ramos stands as the lone Mexican left in the event and has the entire beach behind him heading into tomorrow's final day.

"I'm super happy and really motivated so I'm just going to give it everything I have tomorrow morning," Ramos said. "Coming into this event my expectations were to just throw everything at it and aim for first in every heat. I got a couple of good boards before I left home and came here a few days early to get as much practice as I could. Now that I'm in the Quarters, I feel like I can actually win this thing." 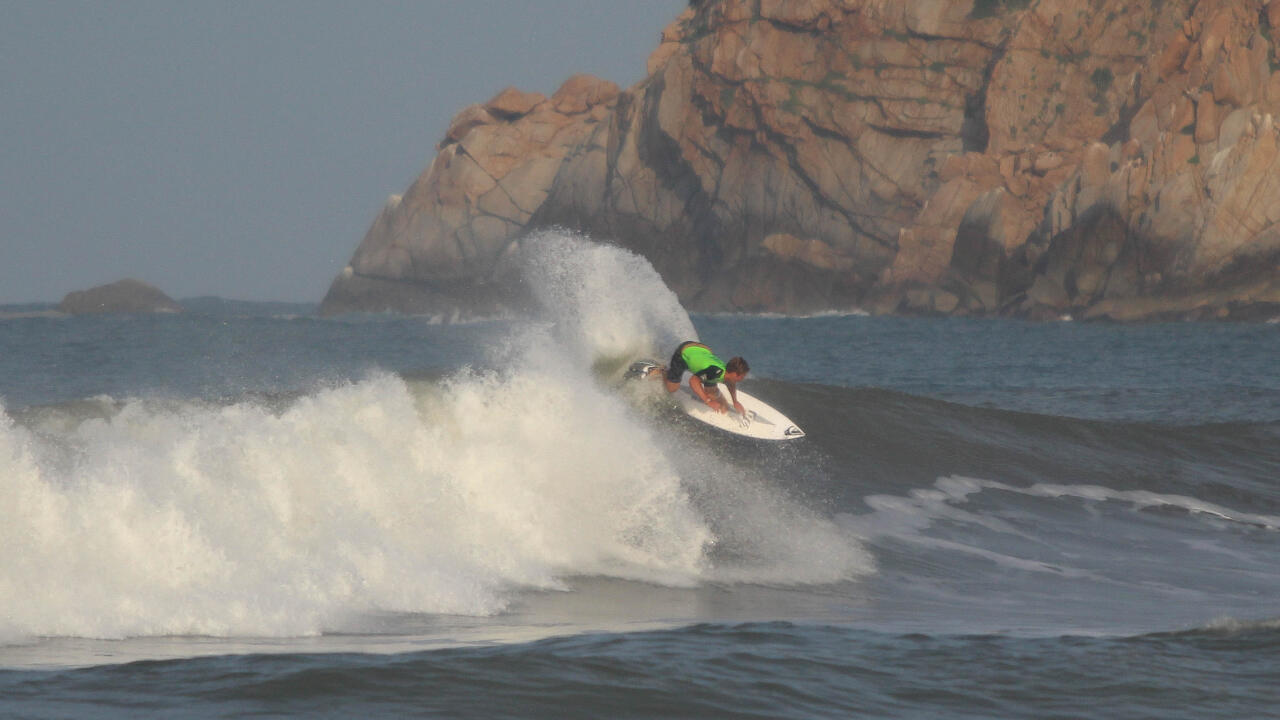 A handful of young guns staked their claim in the Quarterfinals, including an in-form Micky Clarke who earned two heat wins in today's action. This marks the 18-year-old's best performance at the QS level and now heads into his first WSL two-man heat tomorrow morning after laying into the Playa Revolcadero walls that stacked up for him.

"It's way better than your typical QS event here with a lot of waves, but there are a lot of closeouts so you have to find the right ones and there's a lot of scoring potential on them," Clarke said. "This is the first event where I've gone in thinking I can actually make a few heats and I've never made the Quarterfinals before. I'll have to get my game plan set for tomorrow since I haven't been in this situation yet." Three goofyfooters remain and John Mel (USA) will be one to keep an eye on tomorrow. - WSL / Andrew Nichols

John Mel went head-to-head with yesterday's standout performer Carlos Munoz alongside Rey Hernandez and Gabriel Farias. Mel's already begun to show he his father's, Peter Mel, son standing 6'2 at just 17-years-old and throwing all of it into each turn -- showcasing impressive surfing with gauging rail turns to open his Round Four account by posting a 7.17. Though never dropping below runner-up, Munoz put the Santa Cruz native to the test and in the end Mel posted a 7.07 to secure the win.

"I was stoked to finally get a bunch of waves because every other heat I've made it in the last minute or so, so it felt nice to get waves right at the start," Mel said. "Before this event I've just been enjoying some surfing and now I'm looking to get more points here which I need to get into those QS6,000s before the cut off. I'd love to be there and this is my last chance at it. But, I'm not looking too much into it right at the moment and just want to stay calm." San Clemente native Cole Houshmand capped off the blazing performances from the up-and-coming talent pool with a big Round Four win. The 16-year-old finds himself in the same spot as his fellow competitors on the hunt for points to start a push toward making the QS elite. Mel and Houshmand still have their Pro Junior years ahead of them, but have made it a point to start building their future now.

"I'm looking for a big result here to boost my rankings a bit before that mid-season cut off and I'm just focusing on my surfing," Houshmand said. "These QS1,000s are super important for me and if I can get into that Top 200 it'll be great. With a lot of the North America guys already at that high level, this is a great opportunity for the guys like us to gain some points back and if you can finish at the top of the rankings there it could be huge for you."

Also in the Quarterfinal draw, Carlos Munoz, Bruce Mackie, and Derek Gomes will vie for this year's title.

A great day of action kicked off the inaugural Jack's Surfboards Pro QS1,500 in powerful conditions at Huntington Beach.

The morning's conditions were challenging for the Junior men, who rose to the occasion and continued their high-performance surfing.

The O'Neill Coldwater Classic fired through the first day of action, crowning a Local Trials champion and getting the main event underway.