For the second consecutive day at the Vans US Open of Surfing, the attrition continued to mount -- top seeds tumbled unexpectedly amid the struggle to surf another day. Four more Championship Tour surfers -- Connor O'Leary, Frederico Morais, Jeremy Flores and Nat Young -- stumbled, but the biggest shocker was the Round Three elimination of current Qualifying Series No.1 Jesse Mendes. Yet, despite finishing 37th, Mendes will still improve his position, adding 640 points to his already impressive 22,060 point total.

Good conditions prevailed until midday when the predominant northeast sea breezes, absent for the past three days, returned to cut up surface conditions. However, a semi-consistent south swell continued to provide plenty of opportunity for surfers who could find a big move outside, connect through to the inside and throw caution to the wind in the dumpy shore pound. After a day full of 5- and 6-point rides yesterday, scores jumped up a notch on Friday. Not that any of that mattered to struggling CT surfer Josh Kerr, who found the fountain of youth, at least for a moment. Kerr clicked off a stylish Method air out the back and capped it off with another punt on the inside to score the round's highest single-wave score -- a 9.00. Yet it still wasn't enough to win his heat against Filipe Toledo. So it goes this year for Kerrzy.

Tomas Hermes' 8.50
2:30
With a big air in the shore break, the Brazilian grabs the morning's highest single-wave score.

Perhaps the best example of surviving and thriving through the day was Brazilian Tomas Hermes, who rode the mercurial whims of Mother Momentum like a paraglider in a windstorm. Earlier in the day, the diminutive Brazilian was a mere 10 minutes from elimination in his Round Three heat, sitting on a pair of four-point rides. But then he cracked the code -- linking two strong turns out the back with a wicked quick air on the inside to score an 8.50 and take second to a pumped-up Griffin Colapinto. Having washed off any lingering signs of doubt, Hermes tore in his Round Four heat like an Atomic Ant, posting the highest total heat score of the entire day. Taking it back to his roots, Jadson Andre stomps his signature move. - WSL / Kenneth Morris

And the trials of Jadson Andre continued in Round Four. Andre, who seems perpetually in danger of falling off the CT, survived a late charge from O'Leary to take second place, still an advancing position in the sole three-man round of the event. As one of the most well-liked surfers on Tour, if Jaddy could ever string together a series of good results on the CT he would probably save quite a few grey hairs from his legion of fans all over the globe, not to mention among the ranks of his fellow Tour mates.

One of the more intriguing heats of the day featured The Battle of San Clemente: Patrick Gudauskas vs. Tanner Gudauskas vs. Griffin Colapinto. The upside for surfers at Lower Trestles today? At least a 10 percent uptick in available waves with the gaping hole in the line-up due to the absence of the Brothers Gudauskas and Colapinto. The downside? Someone from SC had to lose. Unfortunately for Tanner G., he drew the short straw and was sent packing. 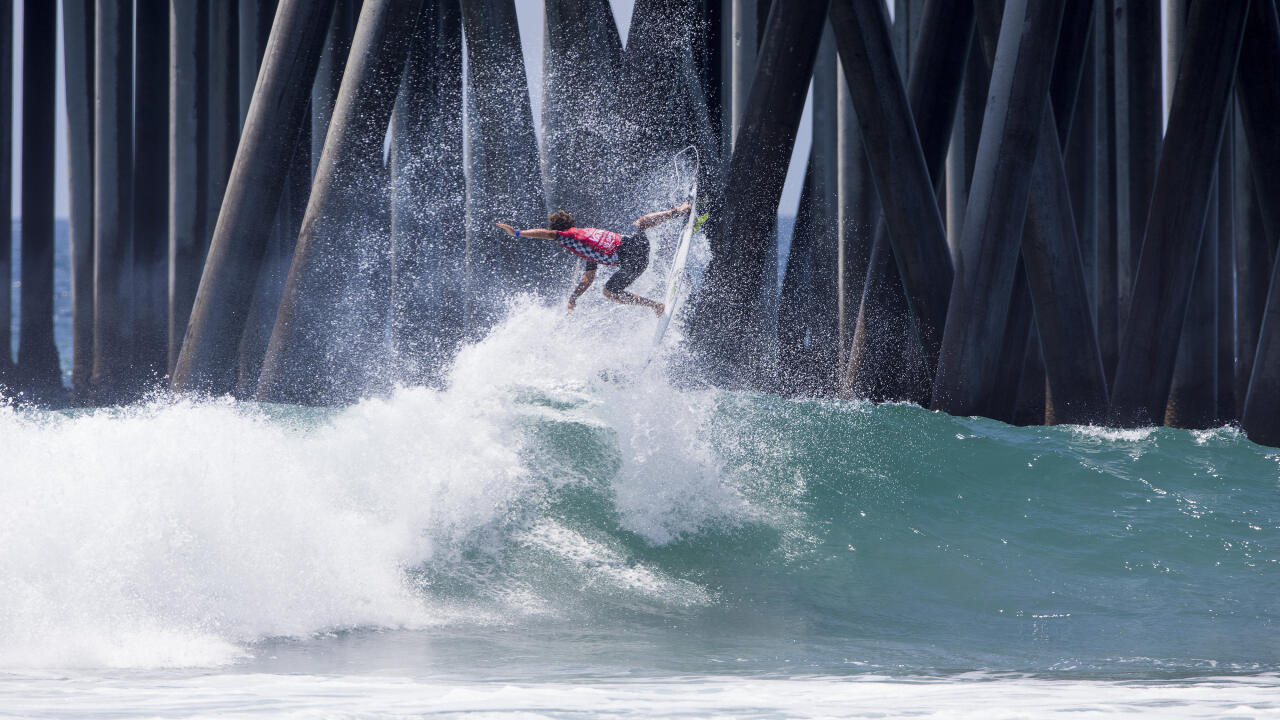 Later, Carlos Muñoz emerged unscathed from yet another friendly fire skirmish between the two Costa Ricans still left in the draw. Fellow Tican Noe Mar McGonagle (whose father is originally from San Clemente) was eliminated, but he won't be feeling too disconsolate. Noe Mar gets to return to his hometown of Pavones, home of one of the best left points in Central America.

According to the forecast from Surfline, 3- to 4-foot surf should continue to roll into Huntington pier over the weekend. Check back for all the action at the Vans US Open of Surfing.