Greetings from Lemoore, California, home of Kelly Slater's Surf Ranch, the surfing world's most renowned unnatural wonder. As you've probably heard by now, a cross section of the world's best surfers are in town to run a first-of-its-kind test.

What are we testing?

Put simply: this is a research and development exercise that allows all the stakeholders involved in any future event to understand the wide array of opportunities available. Everyone from competitors, organizers, judges, broadcasters, sponsors and even a delegation of the sport's founders are on hand to witness the technology that will have a dramatic effect on the future of surfing's evolution. Why no live broadcast?

The aim of the test is to determine what a future broadcast will look like, so while our broadcast team is here on site experimenting, the mission is to explore new options, many of which aren't ready for prime time coverage just yet. That said, we'll be updating this post throughout the day to give you some fun facts about what's happening here.

The 11x champ welcomed the crowd and opened the festivities by riding his first wave since breaking his foot at Jeffreys Bay in July. "I don't care if it takes an extra month to heal, it was worth it." The women have been blowing minds during the mock Round One test. With a stiff breeze blowing, the rights are easier to surf than the lefts. The barrel sections zip off quickly in both directions, so there's little margin for error. Johanne Defay and Pauline Ado got busy refining their acts in the athlete chill zone. 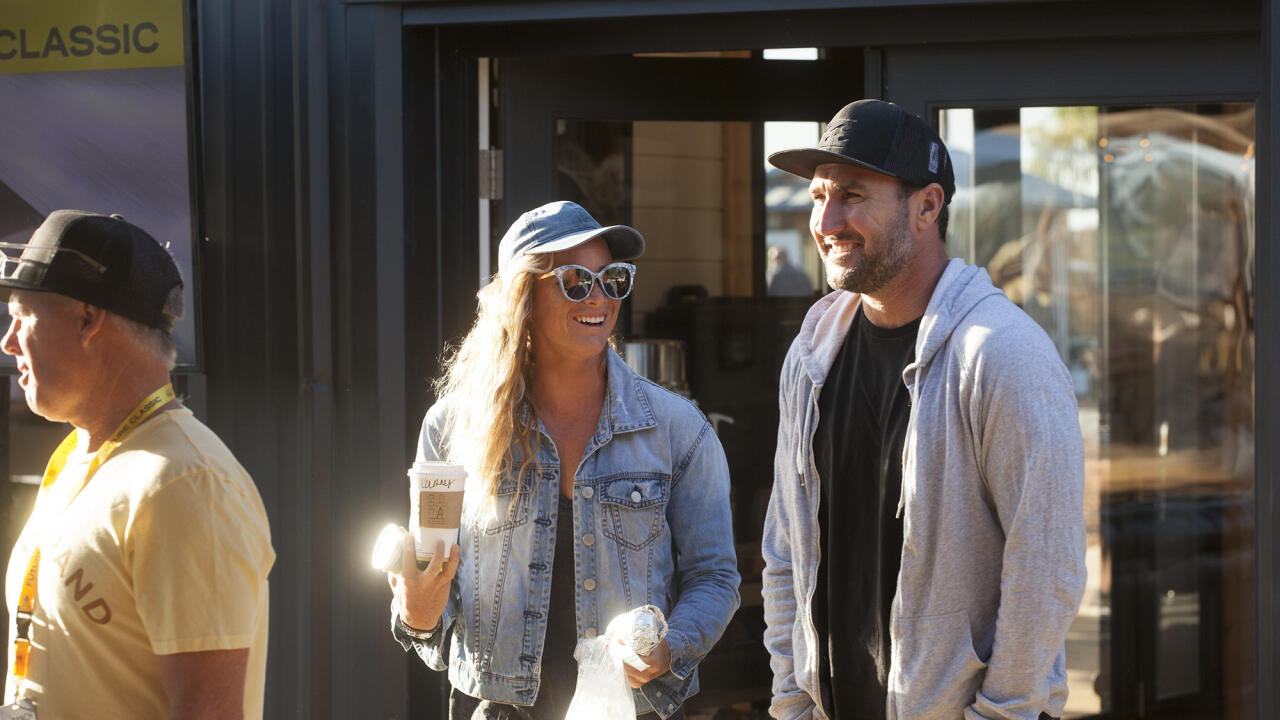 Matt Wilkinson is digging this place. The World No. 4 has been ripping on the new left, but with the wind blowing hard offshore on the rights this morning, he got busy working on his backhand tube poses.

"The WSL intends to learn a lot today -- how this technology can be applied to live competition, how the surfers perform, how waves are scored, how we cover in broadcast, the overall experience that we can create and what it feels like to witness this kind of surfing." - Sophie Goldschmidt It's honestly hard to tell who the most excited surfer here is today, but Filipe Toledo would have to be in the running. The Hurley Pro champ has his game face on, too. Something tells us he's hoping to make some history here. With this test event representing a huge milestone in the history of professional surfing, the WSL and Kelly Slater invited a number of pro surfing's founders to attend this landmark occasion. Shaun Tomson, Wayne "Rabbit" Bartholomew, Mark Richards, Ian Cairns and Peter Townend are all here, along with Hawaiians Fred Hemmings and Randy Rarick, who started the IPS. Surfing's greats from yesterday and today are all having fun absorbing the possibilities. - WSL / Sean Rowland

World Champion John John Florence has already had his share of cracks at this wave, and you can tell when he takes off. He has a good feel for the pace of every section. But during today's test, a couple of his gambles failed to pay off. In the preliminary rounds each competitor caught two lefts and two rights, and only their highest-scoring left and highest-scoring right went toward their heat total. That means errors were costly. Florence fell early on two of his lefts, leaving him in a bit of a pickle. He failed to advance to the Final as a result. His consolation prize wasn't all that bad though...he ripped the snot out of his rights. With rides that are more than 2000 feet long the playing field at the Surf Ranch is massive. Unlike traditional surf events, where the waves are only breaking toward shore, iteration 2.0 offers surfers the chance to go both ways up and down the track. This translates into an entirely new fan experience if you're in the end zone, as surfers race directly at you going one direction, and away from you for the other. Big screens play a huge role keeping them up to speed, especially with the slow-motion replays.

With a favorable wind blowing into the rights it was only a matter of time before Filipe Toledo took to the air. After sticking his landing on this one, Toledo advanced to the first-ever Final at the Surf Ranch.

Before the Final, there was time to take it all in. From the athletes' lounge at the Surf Ranch, Toledo had this to say about the wave: "It's perfect. It's that wave that we dream about, the one that we draw on the paper. The one that you dream about -- being able to surf it, fitting in the barrel for 20 seconds and make it out and turns, turns, and then a final maneuver. Just, mind blown." Kanoa Igarashi has moved into the four-man Final along with Gabriel Medina, Filipe Toledo and Ace Buchan thanks to some very impressive surfing through the speedy sections. One thing that's tripped up competitors all day is how fast the barrel section can run off. "It lures you into slowing down to get into it," says Slater, "but once you're inside you have to hit the accelerator, because the second half of the barrel section is faster than the first." Those who are able to thread the tube successfully are rewarded with some fun open sections to get their hack work done. Eddie Vedder has been a longtime friend of Kelly Slater's, so it's hardly surprising to see him in attendance on a day like today. What is surprising is how much he looks like a stoked grom wandering around the premises. We're pretty sure he'll get a good crack at Surf Ranch 2.0 soon enough, so that might explain the giant grin he's been sporting all day. 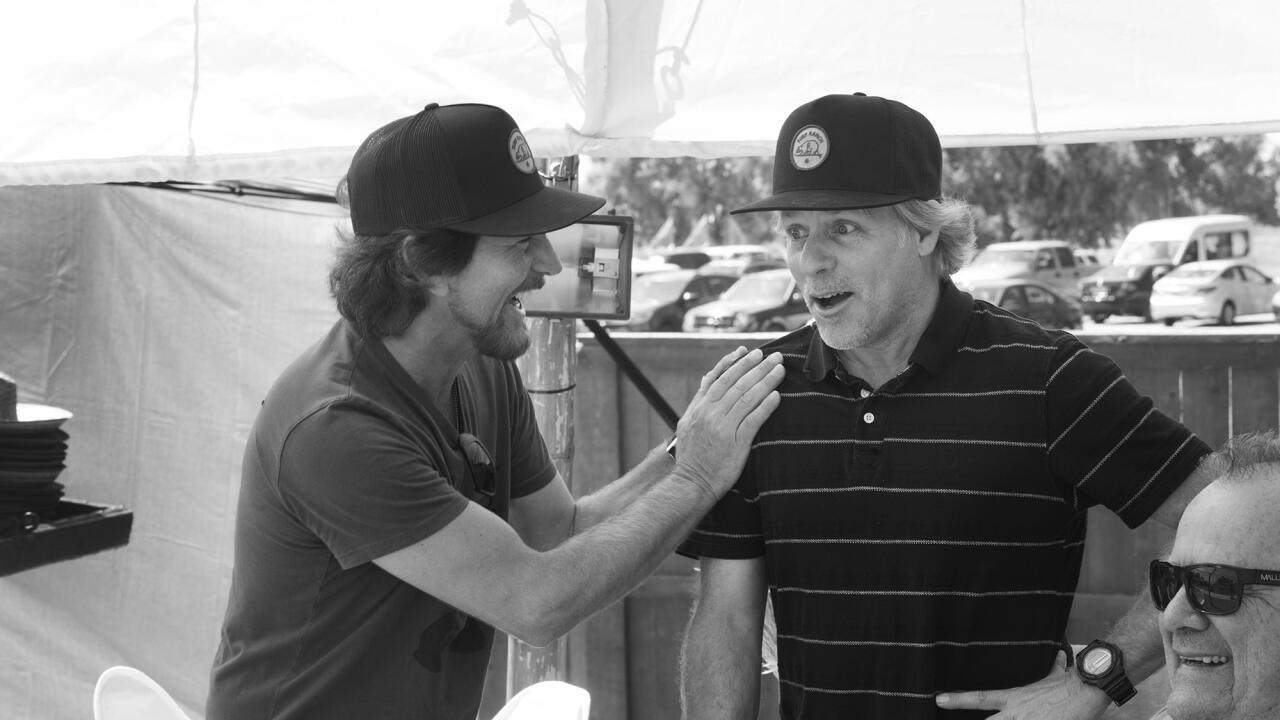 Carissa Moore has edged Stephanie Gilmore to take out the women's event. While there are no ratings points to be had from this event (yet) the prize money from her victory will be donated to her foundation: MooreAloha, a new one she's launching to support youth surfing in Hawaii, especially young girls. Gabriel Medina survived last-gasp charges from Filipe Toledo and Ace Buchan to take the top spot in the men's competition. The 2014 World Champion jumped out to an early lead in the Final, but it was hardly a safe one. Both Buchan and Toledo needed scores in the 7-point range to get past him...sounds easy, right? Here's the snag, with the format requiring one left and one right to be scored, both of them could only catch Medina on the left. But after some big turns, and great tubes, both got snagged on the final tricky section. Toledo fell after landing too hard on a floater. Ace got hung up in the tube, and had to use the doggy-door to exit. Though he emerged standing, the wave passed him by. 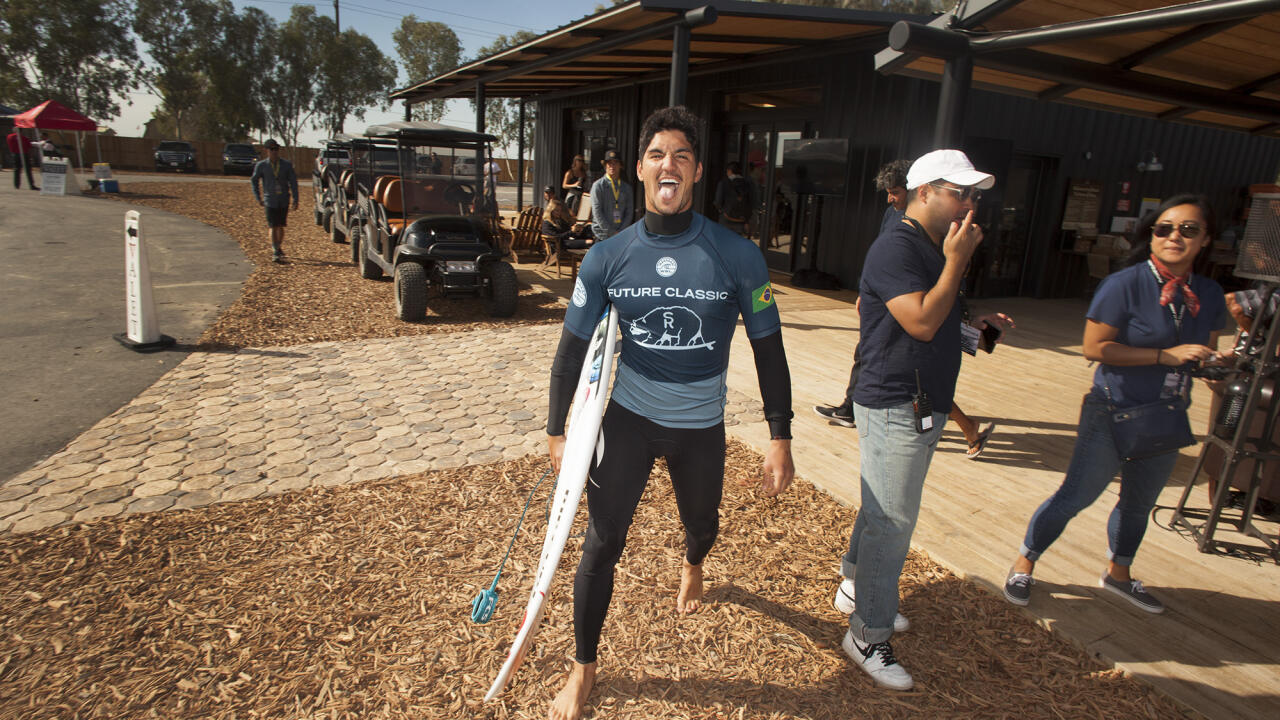 In the athlete lounge nearby, Medina watched intently with his crew to see if his winning numbers would hold up. "I'm so stoked to be a part of history," he said when it was all over. "This is such an incredible day for surfing, and I'm really proud to be a part of it."