Kelly Slater got emotional while praising an intimate crowd Tuesday evening for taking part in one of the best days of his life. "This has been a dream come true and I can't thank you guys enough," he said before introducing Eddie Vedder to the stage.

Slater has had his fair share of good days, so that's a pretty big call, but after more than a dozen years of hard work on his passion project, it makes sense. This was the day things got very real: the day the big screens went up, the fans lined the pool, judges climbed into their towers and competitors experimented with a new format. Yes, there was a competition on Tuesday. And for what it's worth Carissa Moore and Gabriel Medina came out on top. But the competition wasn't even half the story. Slater and the World Surf League are nowhere near done refining this thing. Today's gathering of the tribes was really just the next step in crowd-sourcing valuable feedback on a massive scale. Tuesday was a great start. Engineers pushed the new foil to the brink. Judges learned what it's like to remove wave selection entirely out of the equation. Broadcasters learned how to live with a well-defined tempo, and marketing gurus had their heads spinning thinking about the possibilities. Even Eddie Vedder, Slater's longtime friend, wasn't going to miss this one. "I didn't think I'd ever be back in Fresno anytime soon," he told the crowd at the post-event party. "Now I think I want to get an Airstream up here and park it right next to Kelly's." Vedder got his crack at the Surf Ranch 2.0 yesterday, and was immediately sold. "So Kelly told me I get two waves for every song I sing tonight," he said. "So this might just be the longest concert I ever play." The crowd lost it. Indeed, the crowd was engaged all day, even during an unplanned shutdown period that involved a replacement part. "This is the future," said Wayne "Rabbit" Bartholomew. Buggs, for those who don't remember, was not only the 1978 World Champion, but the man who served as the World Tour director during the reformation years of the late 90s. It was he who willed the Dream Tour schedule to life, shedding the calendar of its long list of crappy-wave venues in favor of exotic reefs and points like Fiji, Tahiti, G-Land and J-Bay. The logistics of that effort were massive, but the effort elevated the game to new heights.

Surfing is now ready for the next step, and the ability to dial up perfection anywhere at anytime changes the game even more. "This is one of the coolest things I've ever done," said Joel Parkinson after his Round One heat. "After surfing for so many years, to get this feeling again... is just incredible."

"It's perfect. It's that wave that we dream about, the one that we draw on the paper," said Filipe Toledo. "Being able to surf it, fitting in the barrel for 20 seconds and make it out and turns, turns, and then a final maneuver. Just, mind blown." And while the perfection was something everyone expected, the ability for the wave to challenge the surfers was a pretty big surprise. "I got properly drilled out there," said Jordy Smith. "That wave is powerful and when you fall you get worked." Indeed, the left presented a hefty challenge all day, and as surfers took different approaches to attacking the wave it was pretty clear who was making the right moves, and who was making the wrong ones. Going in, many thought the judges would be parsing scores by the hundredth of a point. In fact, it was easier than ever to justify scores, especially with the help of extra-slow motion replay available on every turn. 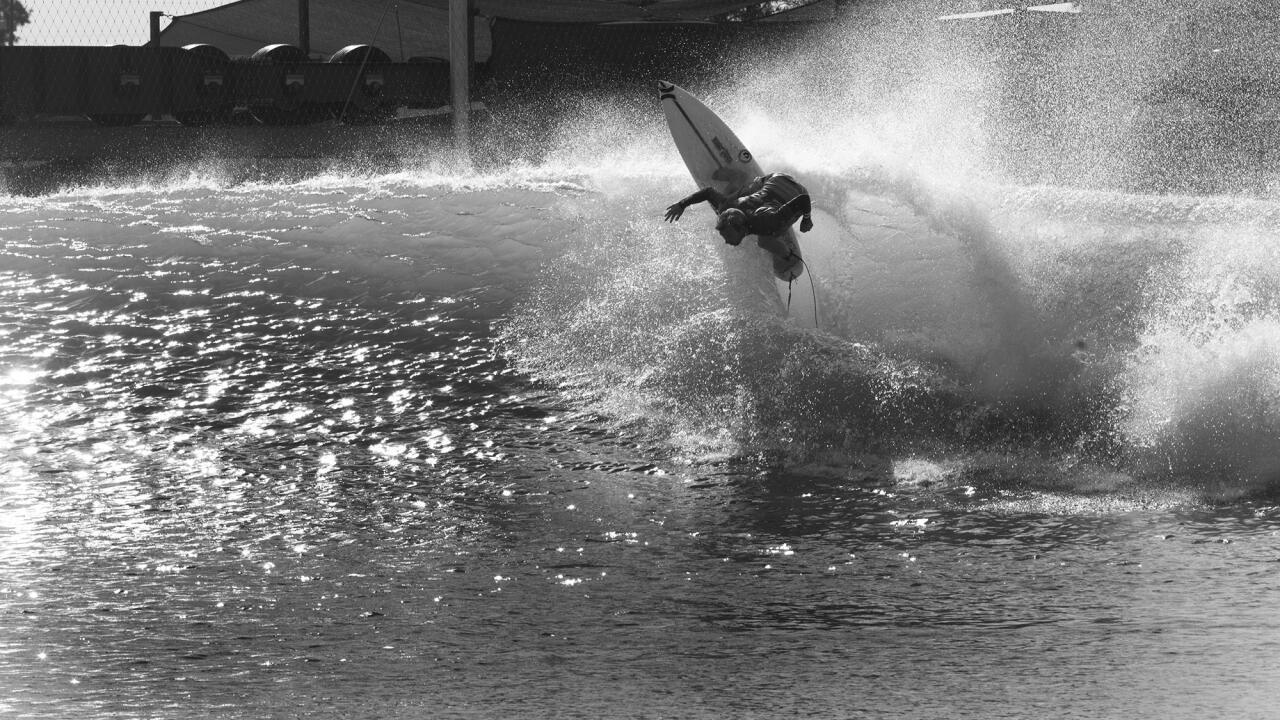 More than a few onlookers were caught saying, "I never thought each wave would actually look different, but they do."

But a new format made for most of the drama. Surfers were tested going both directions. They each got two attempts on the right, and two attempts on the left. Their highest score going each direction went toward their total. With the wind making the lefts much more challenging, even the world's best were struggling to put up big numbers. In fact, John John Florence failed to make the Final after falling on both of his lefts in Round Two. He pushed it a little too hard, too early, and paid the price. Meanwhile, guys like Ace Buchan, Filipe Toledo, Kanoa Igarashi and Gabriel Medina made it out of their tubes, maximized the turn sections, and got creative on the final inside target. On the women's side Carissa Moore, Stephanie Gilmore, Tyler Wright and Johanne Defay did the same. 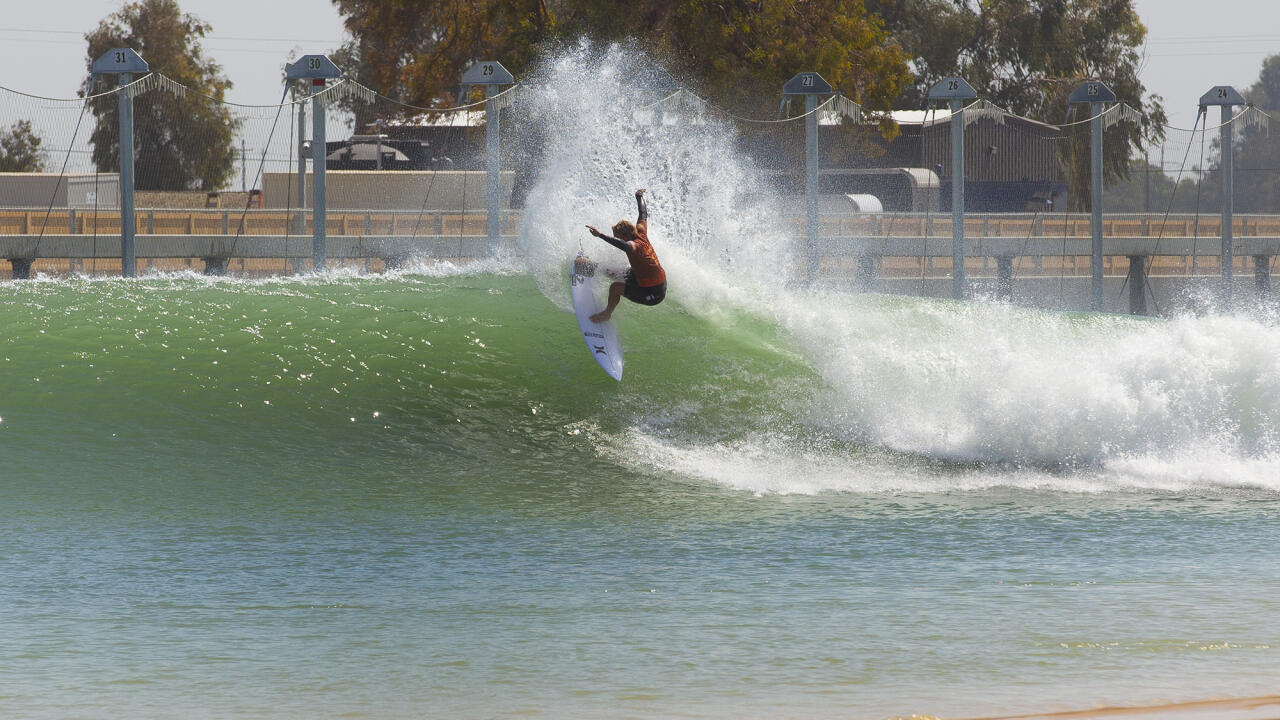 While Gilmore earned four 9-point rides on the day, she ran out of gas in the Final, failing to finish with a solid score on the left. Meanwhile, on the men's side, the drama went to the last wave, as Gabriel took an early lead, and waited in the athlete lounge, watching a big screen, to see if anyone could catch him. His last hurdle was Filipe Toledo, who was only looking for a 7.77 for the win. 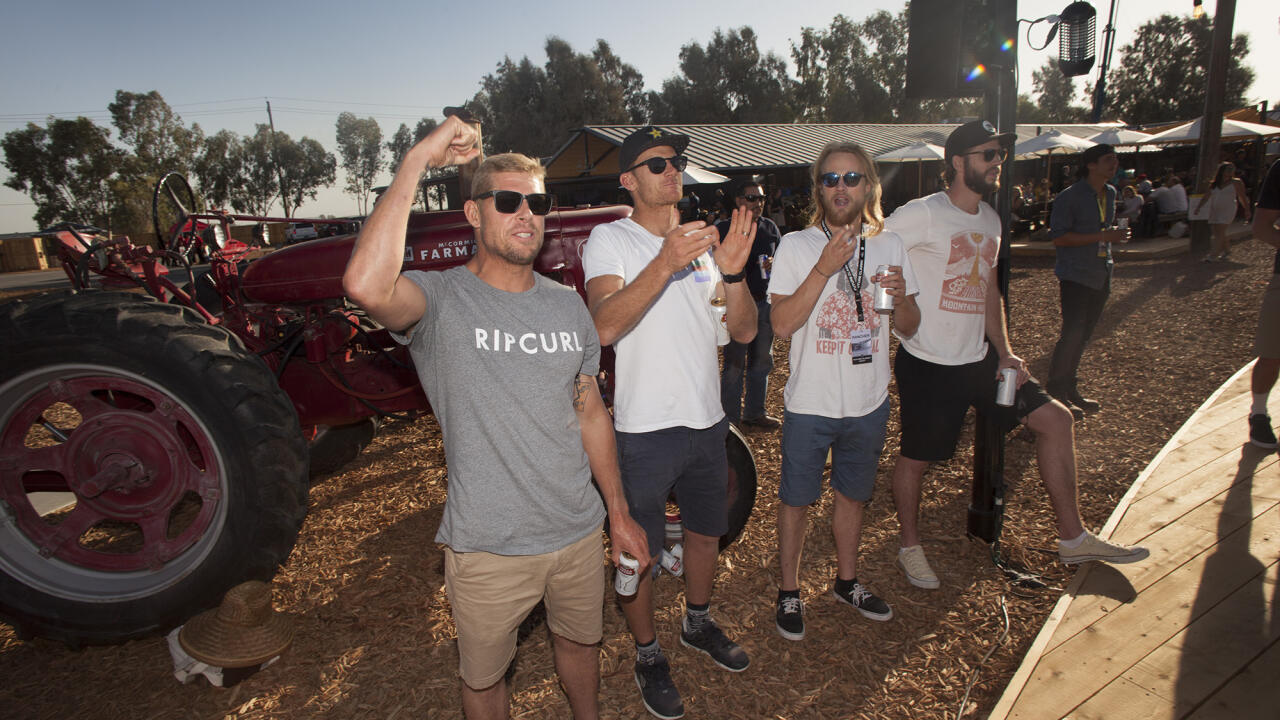 Toledo started strong, too, searing a few carves off the top before weaving through a backside tube that was far from easy to make it out of with the wind the way it was. But then he made the fatal error of trying to float a gutter section, and when the bottom dropped out from beneath him he landed too hard, too fast, and while Filipe was doing a cartwheel over his nose, Gabe took a sip off his drink and cracked a smile. The first-ever tractor trophy was his. His winning score of 16.87 is a testament to how challenging this wave actually is. In all honesty, the takeaways from Tuesday are too many to list, so we'll be touching on plenty of them in the days ahead. Of course, we'll need to ride this wave for the truly informed take, so we're going to see what we can do about that.