The future of surfing is in safe hands as Mateus Herdy, 16, (BRA) and Sol Aguirre, 14, (PER) were crowned as the 2017 WSL South America Junior Tour Champions on Sunday at Guarda do Embaú at the RDS Pro Junior. The event was produced by Adriano de Souza, Yago Dora and Lucas Silveira in honor of their close friend Ricardo dos Santos, who was a local surfer and inspiration to the community at Guarda do Embaú. 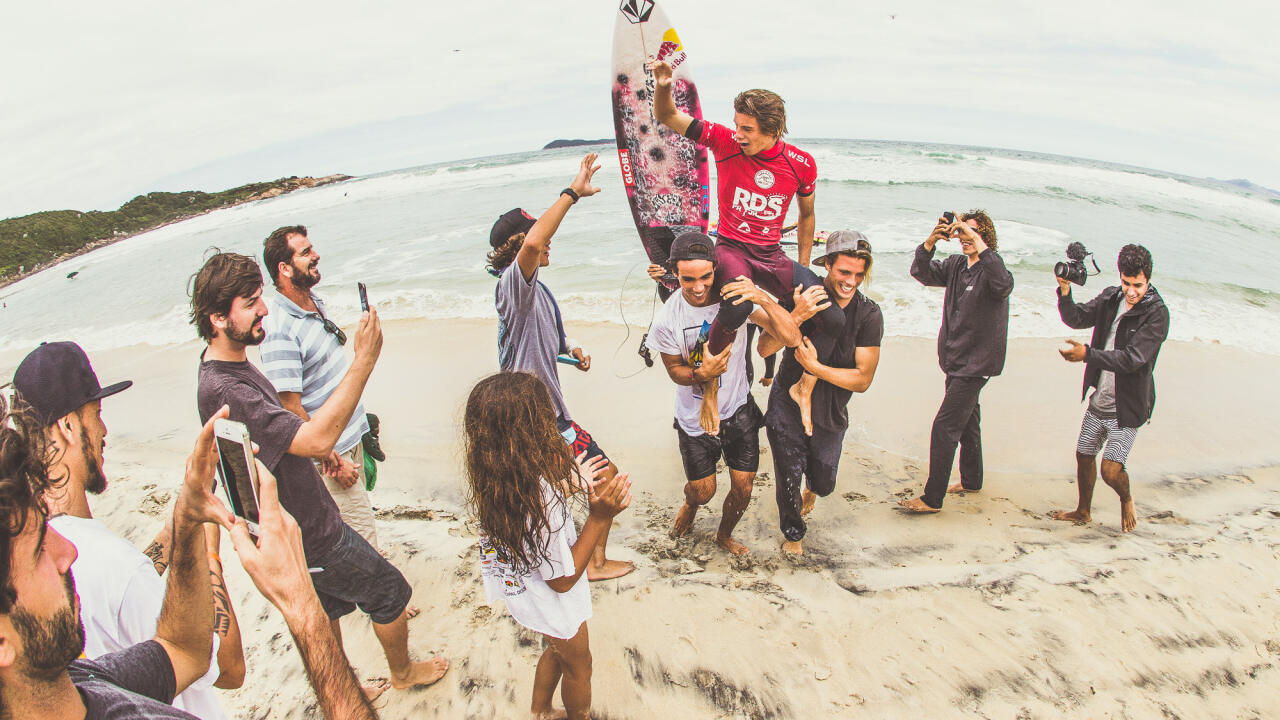 To reach the winner's podium, Herdy and Aguirre had to confront a field teeming with talented competitors, most of whom we'll be seeing a lot more of in the near future. In addition to winning the continental title, both surfers will lead the team of representatives from South America at the WSL World Junior Championship to be held in Kiama, NSW, Australia. Rounding out the group of WSL South America athletes are: Tainá Hinckel (BRA) in the Women's division and João Chianca (BRA), Samuel Pupo (BRA) and Jhonny Guerrero (PER) in the Men's division.

"My main reason for coming here was to win the title and earn a spot to compete in the World Championship," said Herdy, who last year earned a 2nd place result in Peru and was defeated by Weslley Dantas (BRA). "I thought it was important to arrive here early to train hard and get into a good rhythm because I think I was able to display that in my surfing during the heats. After I qualified for Australia (by reaching the Semifinals), it felt like the pressure was off and I felt loose during the Final. Everybody surfed so well during the contest, so I knew I had to surf my hardest to get a good result. I'm stoked that everything worked out," finished the young surfer from Florianopolis. After a slow start to the Finals, Herdy completed a series of massive airs (both frontside and backside) which kept increasing his score which culminated in a 17.17 (8.67+8.50) total to defeat João Chianca's 14.83 total.

"I'm stoked that I'll be going to Australia," Chianca said. "I didn't win the title, but my main objective was to qualify for the World Championship and after that it felt like all the pressure was off. Mateus (Herdy) surfed great, so he deserved the victory," stated Chianca.

Samuel Pupo, younger brother of CT surfer Miguel Pupo, has been showing off his expressive and stylish surfing on the QS for the past few years, but on Sunday, he finally qualified for the WSL World Junior Championship. "This is the third time I've tried to qualify and I'm stoked that I finally made it," said Pupo. "Earning this spot was very important for me and I've always wanted to participate at the World Junior Championship. That was my goal coming here and I've just been having such a great time."

Rounding out the team of four Men's athletes that will head to Kiama is Jhonny Guerrero, the only Peruvian of the group.

"I'm happy with my performance here and I knew that it would be difficult to defeat so many good Brazilian surfers here," said Guerrero. "But I never gave up and it's always been my dream to compete at the World Junior Championship. I'd like to thank all the Brazilians for their hospitality, the waves here at Guarda were great and now my focus is on Australia." Blessed with a coastline riddled with world-class waves, Peru has been committed to investing in their young talent. The verdict is out and results are apparent, capped off by Aguirre's victory on Sunday.

"I'm completely overwhelmed, I had no idea all this would happen," declared Aguirre. "I'm so excited to win the title, my qualification for Australia and for winning this event in honor of Ricardo dos Santos. I never met him, but my father told me stories about him and he's a legend. I was extremely nervous during the Semis because all my opponents were ripping and my goal was to reach the Finals to qualify for the World Championship. Once that happened, it gave me even more incentive to surf against Tainá (Hinckel), who is an incredible surfer. It feels amazing to win and it will be an honor to represent Peru in Australia," finished Aguirre. The young Peruvian's most difficult hurdle came against local surfer Tainá Hinckel, the defending WSL South America Junior Tour Champion on her home court. The crowd that lined the beach at Guarda do Embaú left little doubt as to who they'd be rooting for. But Aguirre opened up the Final with an 8.25 with powerful surfing and defeated Hinckel by a final score of 11.85 to 8.80 respectively.

"Unfortunately, I couldn't find the right waves to win the South America Regional Title again, but it feels great to know that I'll be competing in Australia at the World Championship again," said Hinckel. "I didn't do too well there last year, but I'll be training hard to give it my best to try and become the WSL World Junior Tour Champion. Of course, it would have been amazing to have won this contest, since it was in memory of Ricardo dos Santos and because I'm from here, but I'm very happy with this result." 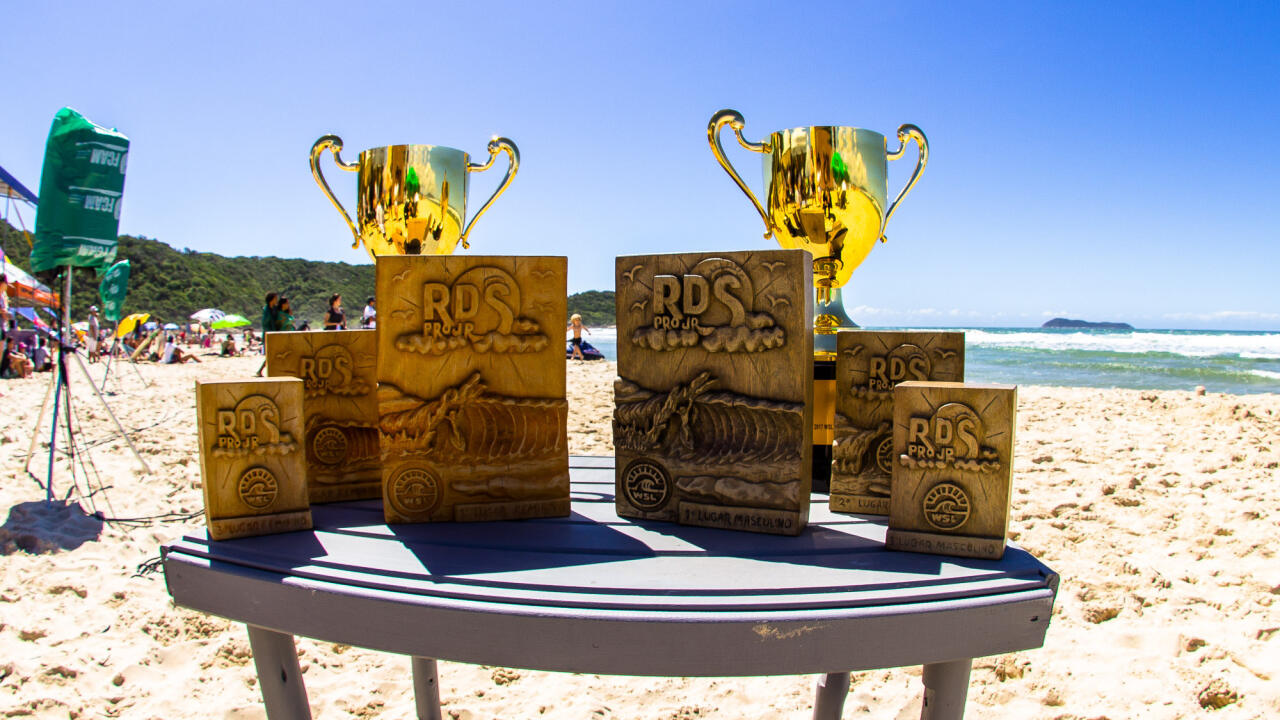 Catch all the action from men's round 2 at the RDS Pro Junior, Guarda do Embaú.