The last couple of weeks have been a bit of a whirlwind for 13-year-old Sam Ruskin of Jupiter, Florida. Last week a huge morning show team from Japan stopped by to do a feature on him, producers from the Ellen Show just reached out too, and on Tuesday the Palm Beach County Commissioners gave him a commendation for his heroic rescue effort at Jupiter Inlet on October 27. 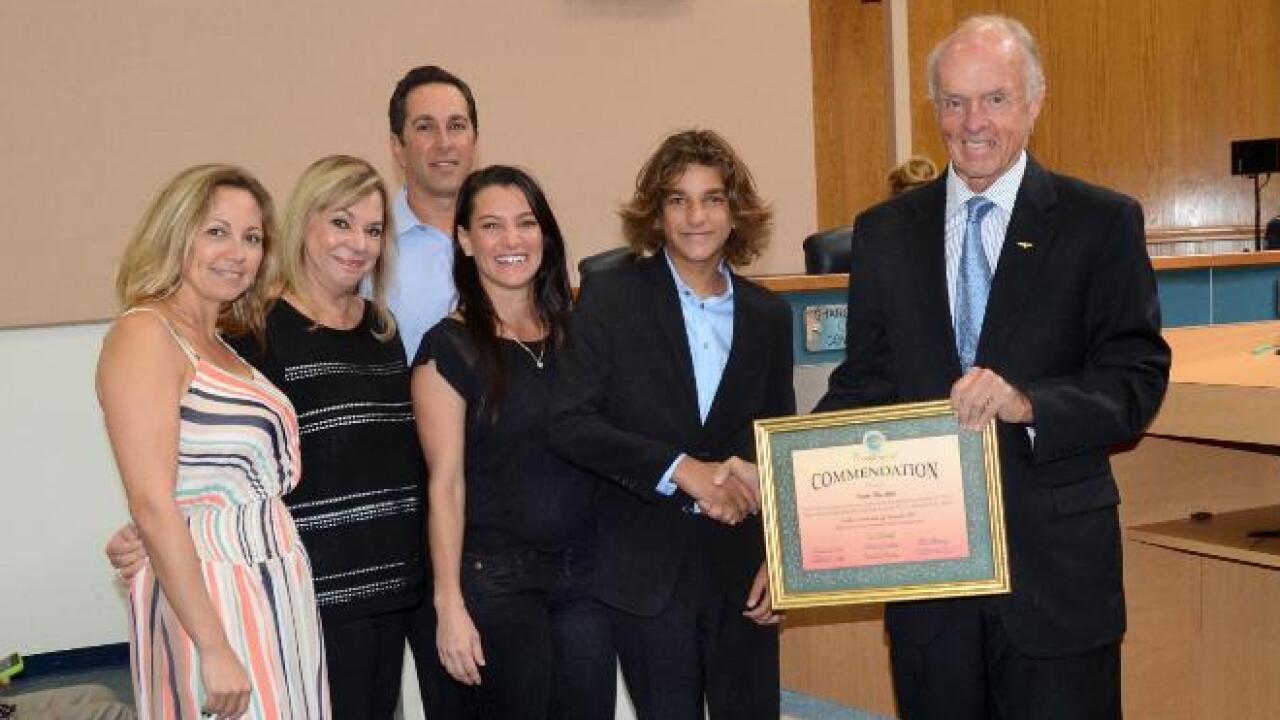 Sam Ruskin recieved a commendation from the Palm Beach County board of Commissioners on Tuesday for his good deed late last month. - WSL

That Friday afternoon, Ruskin and his cousin were enjoying the fun surf rolling through at the inlet when they heard cries for help coming from the jetty. Unbeknownst to the surfers in the lineup, a commercial fisherman on the other side of the jetty had just capsized while trying to race through heavy surf at the inlet entrance.

After being tossed into the water, the man was pulled back out toward the open ocean, struggling to escape the heavy current. Ruskin paddled out to the end of the jetty to help. "He was struggling," Ruskin said afterward. "And he was in a dangerous spot being so close to the rocks, so I gave him my board to help him out, because I knew he needed help."

The two then slowly made their way to the beach. It was hardly a big deal to Sam, who paddled straight back into the lineup to catch more waves after the incident. In fact, his good deed might have gone unnoticed, if not for a cameraman who was on the end of the jetty that day.

Kevin Cadby, a boating enthusiast who regularly films boat traffic at the inlet when the waves get big, caught the entire incident on camera.

When his footage of the incident went viral, Sam was immediately hailed as a hero. On Tuesday the entire Palm Beach County board of Commissioners gave him a commendation for his bravery. The crowd on hand gave him a standing ovation.

This is the same board of commissioners that just approved Kelly Slater's plans for a new Surf Ranch installation in Palm Beach County. "It was pretty funny," said Ryan Ruskin, Sam's father. "One of the commissioners told Sam that when the Slater park opens he's got an invite to attend, and that he'll be bringing Sam. Sam's eyes lit up."

While Sam is taking his 15 minutes of fame in stride, he's hoping to parlay it into more good deeds in the future. "He's a great kid, who's really chill," said Ryan. "He's already trying to help the boater raise money to get a replacement, letting people know about his GoFundMe page."

Indeed, Dave Sanderson, a local fisherman with more than 40 years of experience, is the man Sam rescued. Though they haven't been in contact since, Sam found the fishing community rallying behind Sanderson, and figured he'd help.

Of Sam, Ryan added, "He's your typical teenager. If he gets his skate and surf time in he's chill. But he's also the type of kid who likes to help, so he's looking for ways to give back."

We suspect we'll be hearing much more about Sam in the near future.