Prior to the 2017 season, Jorgann Couzinet was relatively unheard of. But in the span of one season, the tall, muscular Reunion Island surfer leaped 94 spots on the Qualifying Series to No. 18, a place that suggests that a stronger effort could see him join the world's best on the Championship Tour (the top 10 on the QS at the end of each year qualify for the CT). Last year, Couzinet also clinched the European regional title, and has now set his goals even higher. He's currently launching his 2018 assault in Israel at the QS3,000 Seat Pro Netanya pres by Reef. On a break between heats, he sat down to chat about his career so far and what he has in store for this season.

WSL: Last season was a pivotal moment in your career, what more can we expect from you?
Jorgann Couzinet: I made a massive leap last year in the rankings and I'm thinking I'm capable of jumping a few more, and why not even win the QS this year. My focus is on winning early and carrying momentum throughout the whole season. I'm extremely determined and I'm giving myself all the chances to reach those goals. 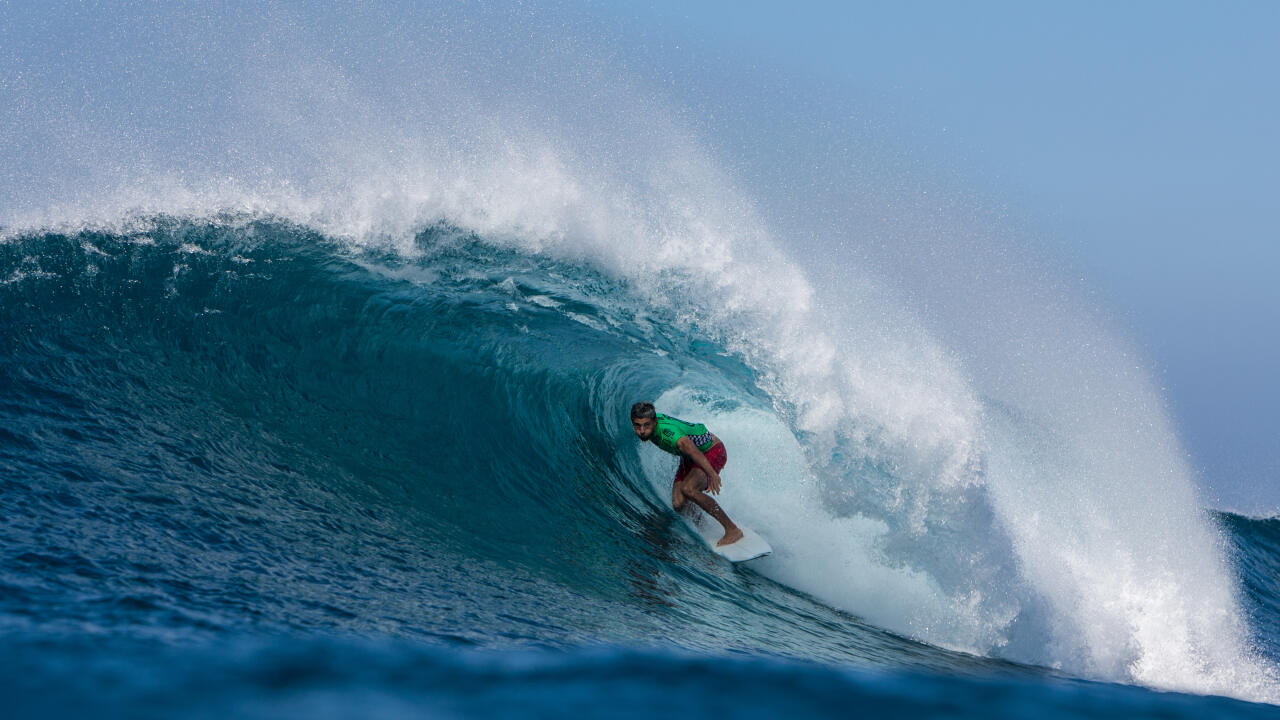 His Hawaiian finish is partly why Jorgann didn't make the Top 10, but rest assured he can surf big open barrels, too. - WSL / Tony Heff

You're 24, and that transition phase usually happens earlier for surfers. What took you so long?
I'm a freesurfer deep down and I've always wanted to put on a good show, and that clearly doesn't work in competition. So I sat back and analyzed what does and I'm formatting my surf in events to get the results I want. Last year it really showed, a lot of people started telling me I would get it, that I'd win something and it finally arrived in Pantin.

Where does your motivation come from?
I've been runner-up so many times before I finally won anything. I was starting to really hate that spot and it made me super hungry to get better. I had to work a lot on mental strength, this is definitely something that I lacked in the past and it's starting to pay off. I feel a lot more confident now. I've always been a hard worker. I've spent a lot of time training even when I saw other guys go out and enjoy themselves, but I knew it would pay off at some point. Now I'm older and I haven't got much time to waste so I want to continue to improve and get to the next level. I'm starting to live a more comfortable lifestyle and I absolutely love what I do, so right now I'm living the dream.

You've also recently signed with a major brand, was that part of the recipe to your success?
When I was young I wasn't very successful so I lost my main sponsor pretty early. But it never stopped me from believing and thankfully with the results came the support of Soöruz, which helps me immensely. There's a family vibe in that company and the guys running it are always super nice, always sending me good vibes and motivating me. I'm getting a lot of support from them and from the fans in general, which is awesome.

You've made it quite clear that the goal now is the number one spot on the QS, and to qualify for the CT. What more are you doing this season to get it?
I'm going through heaps of boards at the moment, trying to find the gems that will make me win events again. I surf Channel Islands from the US and Clean Cut from Anglet [France]. I never realized how much of a difference it makes but now I know it changes everything, and I'm working hard to find the ones that make me surf with confidence. I'm also working on concentration and finding a routine that works for me at events, to reach the maximum focus before I paddle out for a heat. Jorgann got a little trophy last year, and is looking to upgrade in 2018. - WSL / Laurent Masurel

Since our little chat, Jorgann won his first three heats in Israel and is now in the Quarters, unfolding later this week. Catch all the action right here.