By big-wave standards, Tuesday and Wednesday were pretty tame at Mavericks. Sure, there was the odd bomb or two, but by all accounts they were few and far between. But Thursday was an entirely different story, and one that won't soon be forgotten. 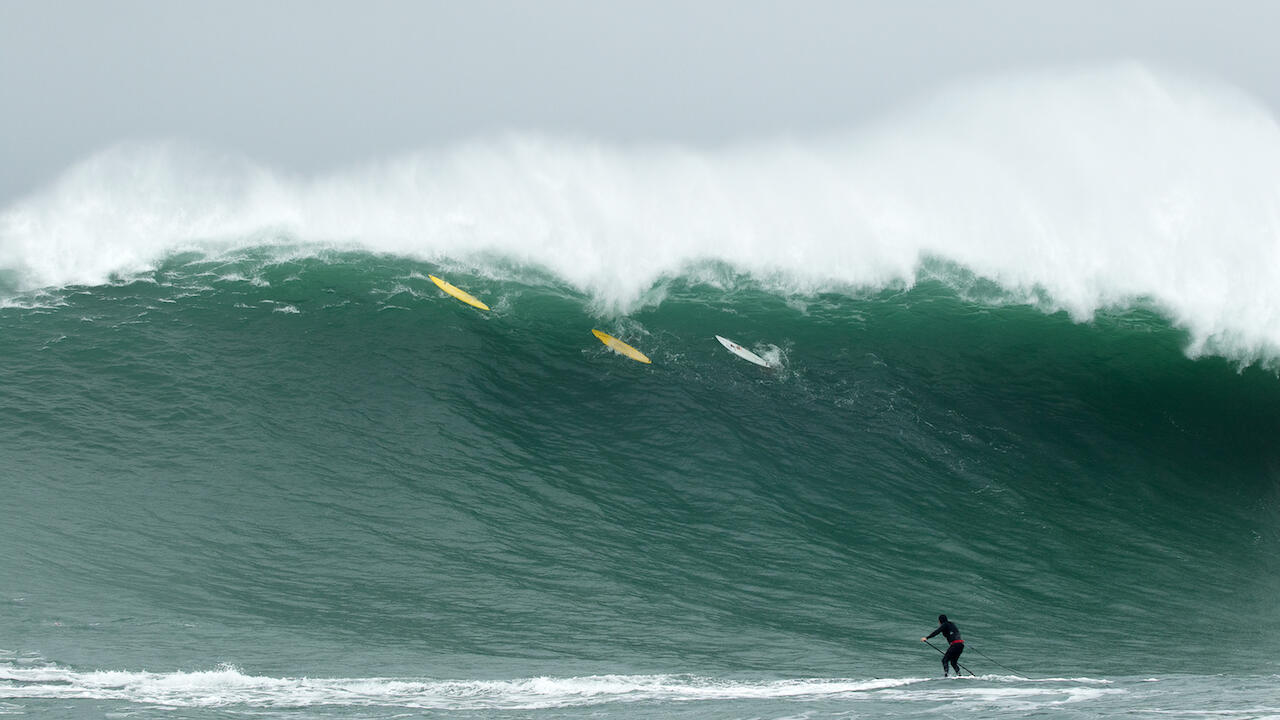 "There were 50- to 60- foot sets for sure," said photographer Frank Quirarte, a veteran Mavericks shooter who doubles as a safety ski driver. "That was easily the biggest surf we've had up here in over a dozen years."

"What was going on this morning, I've only seen it in that range maybe two or three times before," said Peter Mel, the former Big Wave World Champion and Big Wave Tour Commissioner with more than two decades of Mavericks experience. "It looks like a national monument at that size. It's like checking out Niagara Falls." Early in the morning, Ion Banner and Jason Stark were towing the big stuff, dropping into third reef bombs. But when Mel arrived with his 18-year-old son, John, they paddled into the fray.

"I wanted John to experience what it was like to see that much water moving around," the elder Mel said. "We knew it was beyond his reach, beyond everyone's really, but there's so much you can learn just from being close to it. It looked approachable at first...but it wasn't. Not in the morning." Lucas Chianca (on the lower right) stares down a beast. - WSL / Todd Turner

"It was a whole different lineup today," Quirarte said. "We watched for a while as they tried to sort it out."

At one point, a boat filled with photographers came racing into the lineup during a lull. None of them were in wetsuits, and without knowing it, they had positioned themselves in a very dangerous spot. "I saw this same captain out there Monday, when it was smaller, and a bunch of boats were getting really close to the peak -- too close," Quirarte continued. "The guy was going right back at it today, before even seeing a set wave." 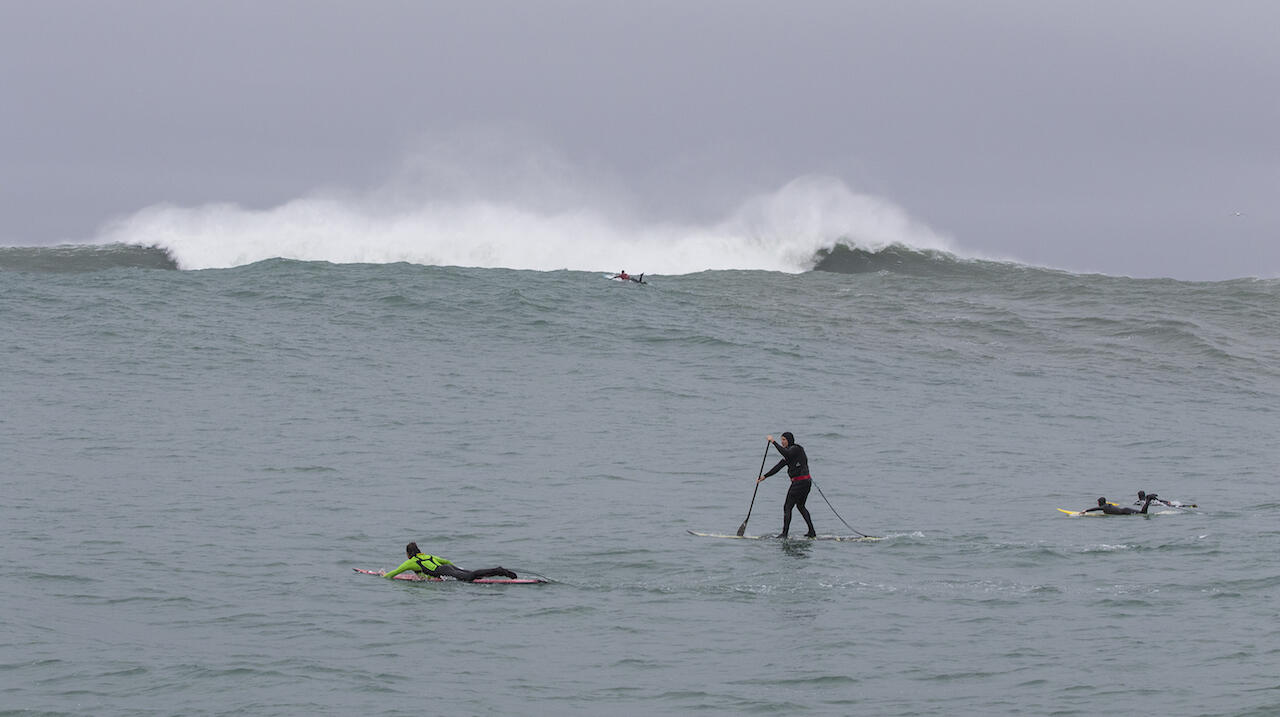 Quirarte and Half Moon Bay local Todd Turner, who also doubles as shooter and rescuer, zipped over to back them into safer water, deeper into the channel.

"The wind and current were both pushing people from the channel toward the lineup, so it was a very sketchy situation," said Mel. 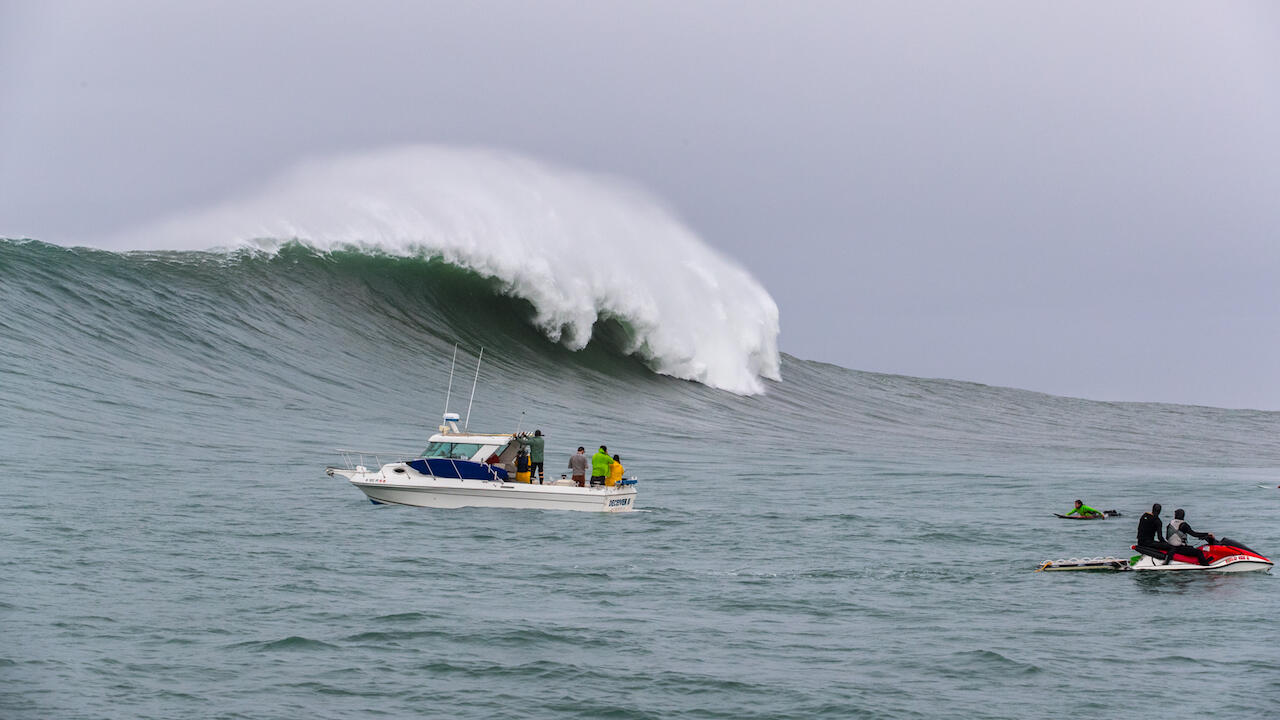 Thursday's Mavericks magnitude was off the charts. - WSL / Todd Turner

Meanwhile, Andrew Dorn, an experienced Mavericks boat captain, was hanging on his boat a little further inside. There was a photographer with a phantom camera on Dorn's boat. Dorn's other passengers, big-wave chargers Lucas Chianca, Ben Andrews, and Carlos Burlé, were out in the lineup. A strong devil wind blew Peter Mel right over the top after he got to his feet on this one. - WSL / Todd Turner

Mel and Andrews were sitting way out the back when they got picked off by a huge set. "Easily the biggest wave I've ever been caught by out there," Mel said. "Luckily, it was more of an avalanche than a top-to-bottom. I bailed and hit my vest. Frank was on me pretty fast to get me out of trouble." Andrew Dorn's boat was taken out by one of Thursday morning's largest waves. Fortunately neither he or his passenger was hurt. - WSL / Frank Quirarte

Quirarte stayed out the back to keep eyes on the half-dozen surfers. Dorn, however, was on the inside.

"Dorn knows what he's doing," Quirarte said. "He's been doing it as long as anyone. But I don't think any of us were prepared for how wide the sets were swinging today. Thank god we got that first boat out of there, because the very next set that came in would have destroyed it." While they were unscathed, Dorn and his photographer weren't so lucky. That same set grew when it hit the inside reef. Quirarte heard screams from horrified onlookers watching on the other boat, and knew something had gone awry. 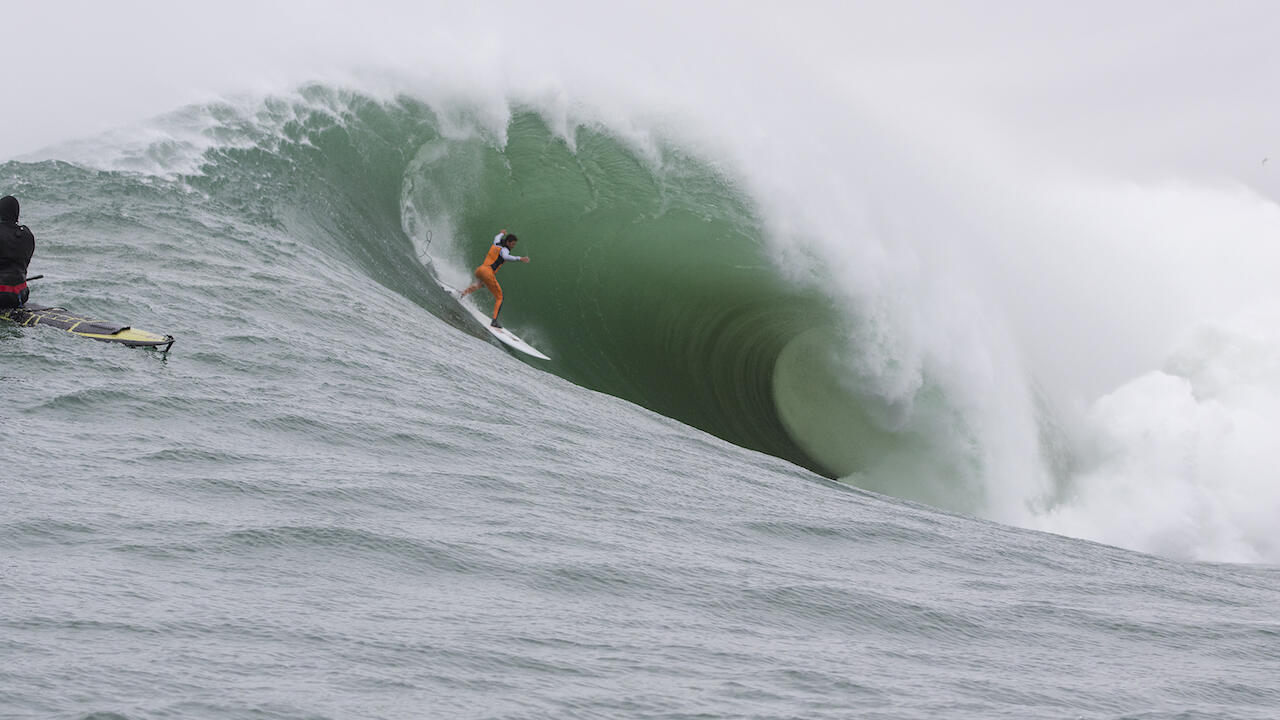 Lucas Chianca managed to nab a beast off the corner before things got ugly. - WSL / Frank Quirarte

"I know that sound," he said. "It's the one you hear when people are reacting to something horrific. When I looked back at the wave that just passed I saw Dorn's boat upside down in the middle of it."

Neither Dorn nor the photographer were wearing wetsuits, so Quirarte and Turner rushed over and plucked them from the chilly water. Both were unharmed, but rattled. "And I could tell Andrew was really angry with himself. He's put a lot of work into that boat, and he was beating himself up for making a bad decision." Waves washed the boat into Black Hand Reef. Meanwhile, way out in the lineup, the surfers were all too aware of what was going on. "You're hyper-aware of everything out there," said Mel. "We're trying to line up with everything -- buoys, boats, kelp. We saw the thing roll." Once the boat got swept toward the inside reef, Chianca decided to go try to retrieve some of his possessions out of the debris field.

Quirarte drove in to keep an eye on Lucas, and was rushing him along when he ran into trouble of his own. "A bunch of the debris from the boat got stuck in my intake, and I couldn't go anywhere," Quirarte explained. Just then, local surfer Luca Padua was on his way out, and he tried to help Quirarte, but the rope he was using snapped, due to the weight of the submerged ski. "He put his ass on the line for me, so that was cool," said Quirarte. "But the weight was too much, and the next thing you know there was a huge set coming and we had to get out of there. We scuttled the ski...and then just watched it get destroyed." 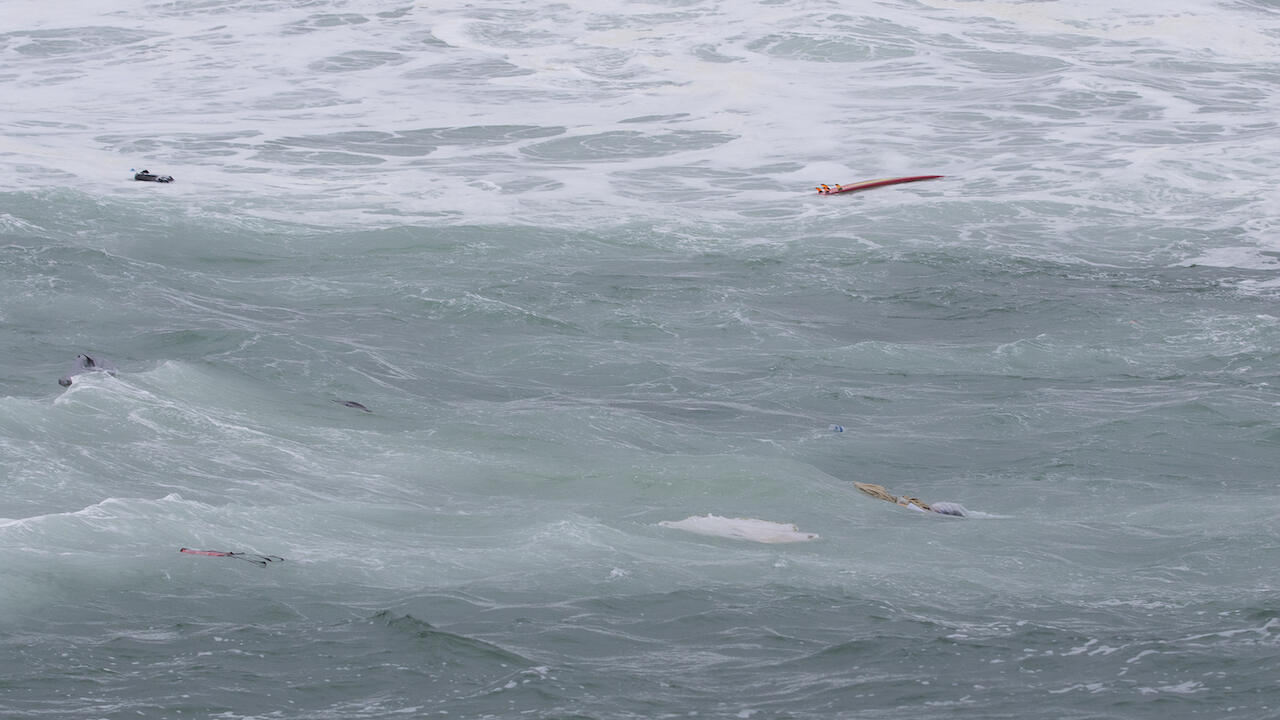 After getting everyone safely to shore, Quirarte finally made his way back into the lineup, where he witnessed one of the biggest sets he'd seen in a very long time. "It was easily a 60-footer. The guys were scratching over it. It was pretty ugly, because the south wind was making it really tough for anyone to get into anything regardless. Not a lot of waves ridden today."

There were, however, at least a few. "Lucas got one off the corner this morning," said Mel. "He's a madman. He does these intentional air drops, where he just flutters in. It's crazy. And I saw him go head down for one he didn't catch...he wanted it though. It was huge. I got a bunch this afternoon when it dropped, but the only one I got this morning blew me out the back." 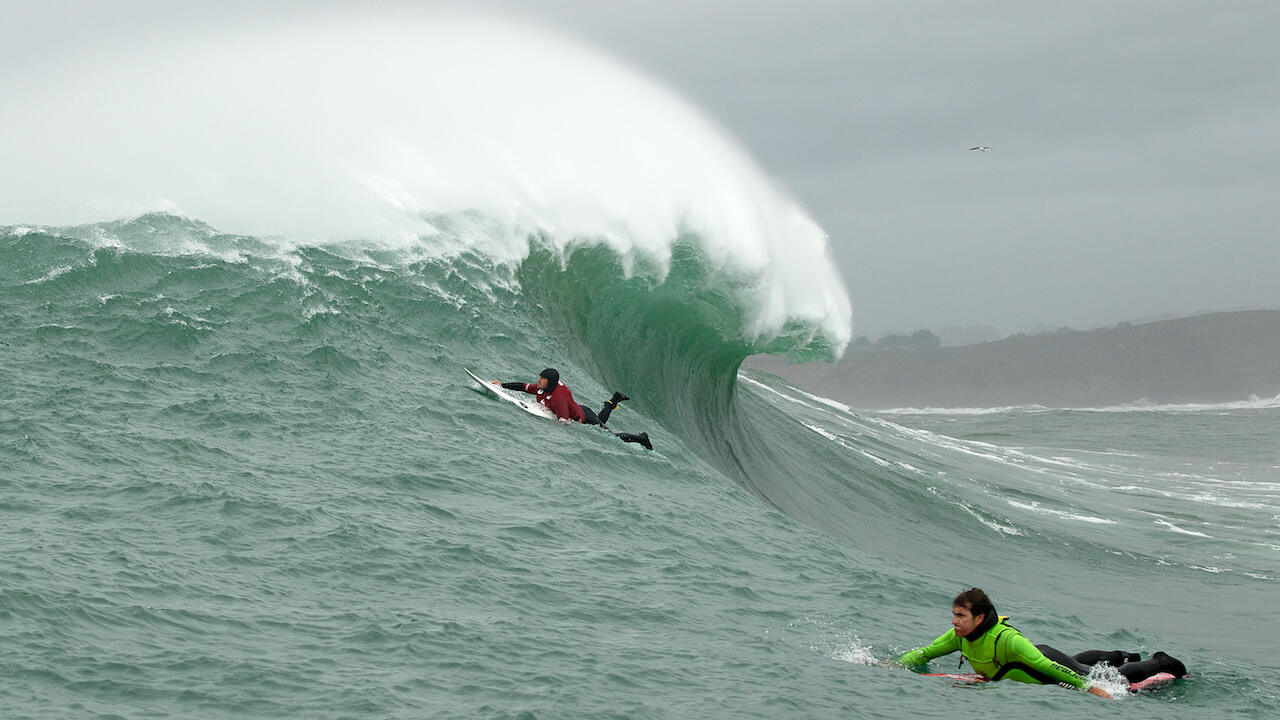 With massive sets looming on the horizon, the usual takeoff spot was tough to stay attached to on Thursday. - WSL / Pedro Bala

While the property losses included one boat, a ski, two cameras and a bunch of very nice gear, Quirarte was quick to point out that the price could have been much steeper. "Everything we lost is replaceable," he says. "It could have been much, much worse." 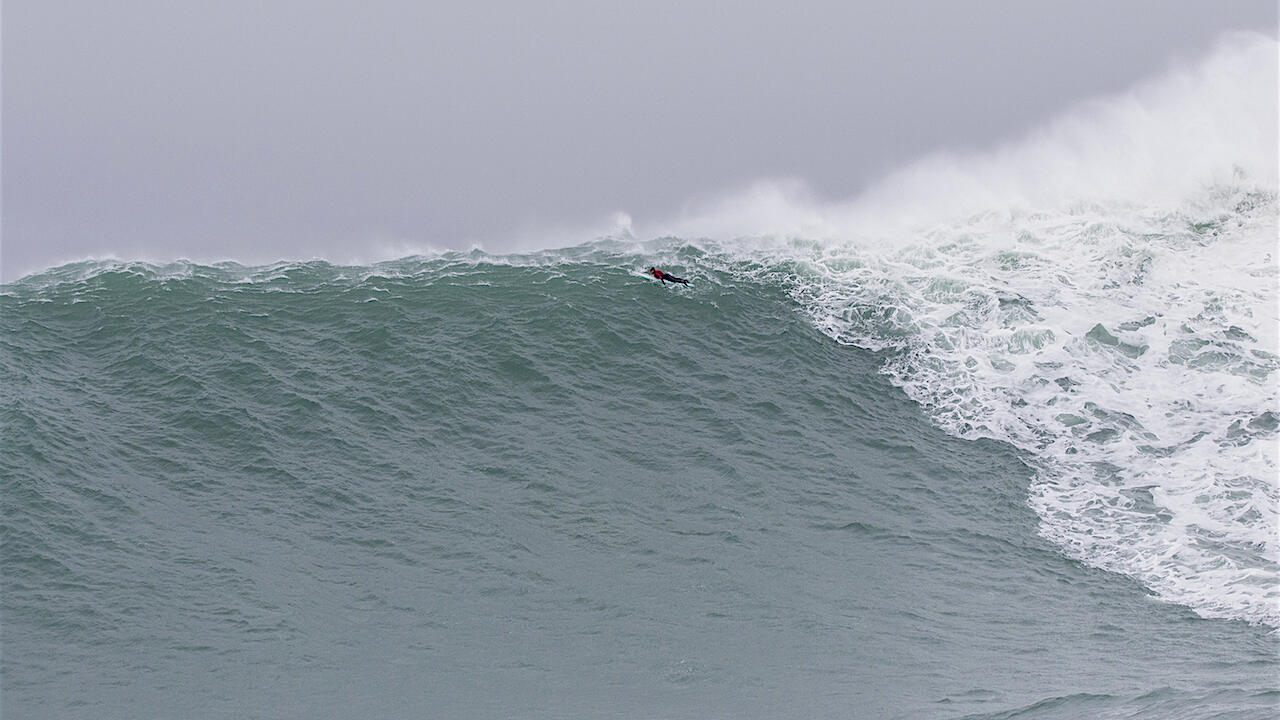 Peter Mel (the little tiny speck on the top of this thing) takes in the view from the summit. - WSL / Frank Quirarte