Sheldon Paishon (HAW) of Makaha, Oahu won the Air Tahiti Rangiroa Pro 2018, a QS 1,000 event, against good friend Michael O'Shaughnessy (HAW) in the Final after besting a field of fierce competitors in barreling surf. Paishon sits in the No. 3 position on the WSL Hawaii/Tahiti Nui regional rankings after the win and looks to bring his confidence and momentum into the next Tahiti event, the Papara Pro Open Tahiti Men's QS1,000, March 11 - 16.

Waves continued to pump through the lineup for Day 2 of the competition and athletes enjoyed more barreling conditions in the 6-8ft. range with faces pushing 10ft. on the sets. Paishon earned the highest two-wave total of the day - an 18.03 - during the Quarterfinals and continued to tally high scores into the Semifinals, where he matched up against Ulualoha Napeahi (HAW) and posted a 9.50 and 8.30. Today's win is his first WSL victory.

"It feels amazing, it's new for me because I've never really felt this feeling before but I'm just going with the flow right now and it feels good," said Paishon. "I feel like my win at Buffalos gave me the drive to come here and keep up the same feeling, the momentum." Paishon speeds through a 9.0 in the Final. - WSL / Rolland

Just days before traveling to Tahiti, Paishon competed in the Buffalo Big Board Surfing Classic, a heritage event that has taken place for 42 consecutive years at his homebreak of Makaha Beach. Paishon took home a win in the alaia division, which sees athletes surf traditional Hawaiian finless boards made from wood.

"Today's result is my best result, it feels amazing, stoked," Paishon continued. "Very happy and I can't wait to see my family and friends when I get home. I went up against one of my best friends (in the Final) and that was amazing, competitive and fun at the same time. No strategy, just have fun with my friend and enjoy paradise."

Runner-up O'Shaughnessy earned his fair share of high scores, including a 9.00 and 8.90 in the man-on-man Quarterfinals against Kauli VaastPYF). However in the Final, he was unable to find the wave scores needed to surpass Paishon. O'Shaughnessy was a standout barrel rider from the onset of competition at Rangiroa. - WSL / Mare

Paishon opened up the 35-minute Final with a technical drop into the barrel, which judges awarded a 7.33. He continued to add waves to his scoreline for an early lead while O'Shaughnessy remained tactfully patient with priority. Halfway through, Paishon found the best wave of the heat, a deep barrel that he completed with a carving cutback for a 9.00 from judges to combo O'Shaughnessy, meaning he needed a combination of two scores to overtake the lead from Paishon.

"I was just waiting for the high score potential, I was trying to be patient and Sheldon just had a good rhythm," O'Shaughnessy commented. "I got one wave that I thought was a good scoring potential and I got clipped halfway through so when I fell on that after waiting for 20 minutes then I was nervous. And then I got back out there with priority again and there was another 10 or 15 minutes I waited and the second wave that I caught was another high scoring potential and just didn't make that one either. It's all good, stoked to make it this far, just real thankful to be here. Thank you to WSL and all my sponsors who support me to help me come here, my friends and family, my girlfriend, thank you." 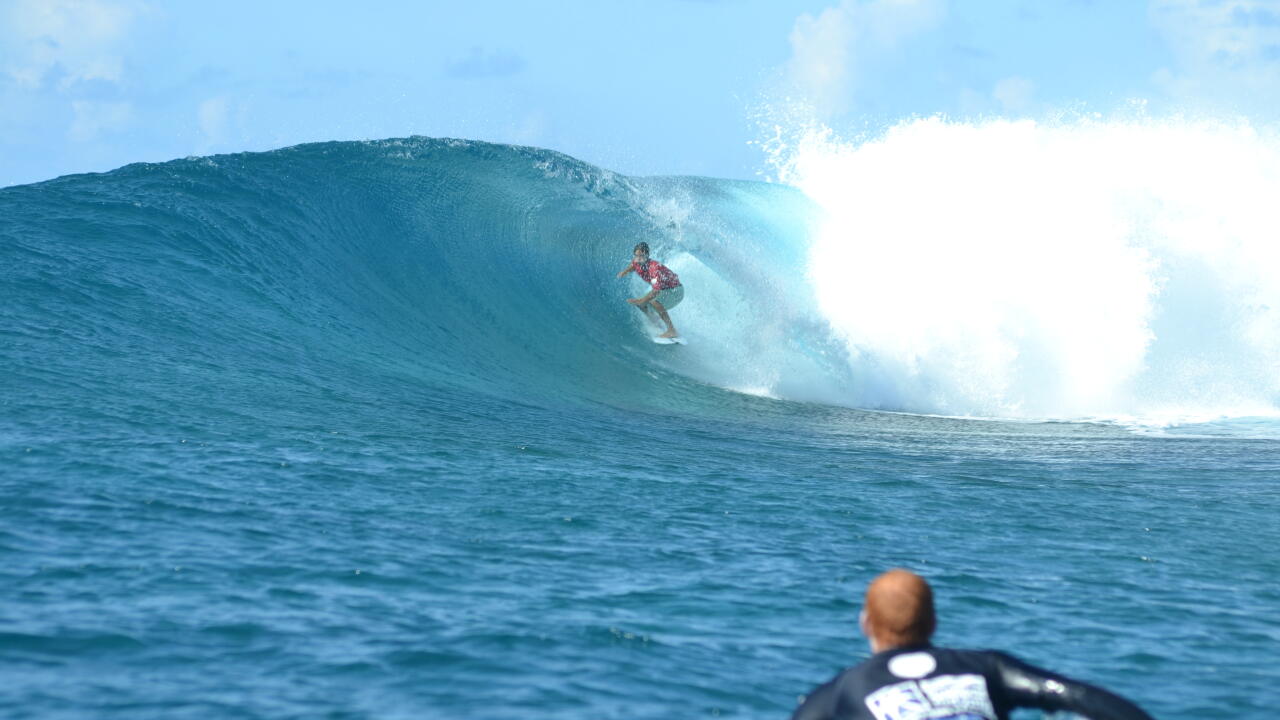 O'Shaughnessy watches Paison score one of the best barrels of the Final. - WSL / Mare

A Big Island native, O'Shaughnessy, was a standout throughout the competition and threaded barrels with ease and confidence, thanks to his experience at breaks like Pipeline and Backdoor on Oahu's North Shore. He has been living along the seven-mile miracle for 10 years and is a regular in the lineup when the heavy-water breaks turn on. During the El Nino season of 2015/'16 he won Wave of the Winter for a deep barrel at Off The Wall, and in 2017/'18 earned runner up as well. A competitor for two decades, O'Shaughnessy has been a household name in both regional competition and freesurfing and today earns his best result of his professional career.

Keeping with yesterday's trend, another 10-point ride was dropped today by Kauai's Kainehe Hunt (HAW) in Round Three Heat 3, for a deep, open barrel.

"I felt like I got a good score. I didn't think I got a ten because I felt like I wasn't going to make it the whole time, so it definitely surprised me when they said the score and I was surprised I got that wave too, stoked," said Hunt. "This is the best contest ever, worth it. I'm really happy to be here. It's a good place, it's pretty hot but the waves are firing so it makes up for it." Hunt sets his rail and lines up the section for what became an excellent 10-point ride. - WSL / Rolland

Hunt was eventually ousted from the competition by power surfer Tereva David (PYF) in the Quarterfinals. David was the highest placing Tahitian in the event and both he and Paishon earned roundtrip airfare to Rangiroa from Air Tahiti, the premier interisland air carrier and event title sponsor. The award will help the surfers travel to the remote island in French Polynesia for next year's competition, and both are likely eager to enjoy the perfect barrels of Rangiroa again soon. David was one the highest placing Tahitian of the event and remains a standout both in Hawaii and at home. - WSL / Rolland

Athletes will now travel back to the main island of Tahiti to compete in the Papara Pro events, which feature a Men's and Women's QS 1,000 and a Men's and Women's Pro Junior. The holding period is from March 11 - 16 and will be an exciting display of high performance surfing from some of Hawaii and Tahiti's top professionals. A switch up from the shallow reef break of Rangiroa, Papara is a punchy beach break set against the black sands of Taharuu and highlights progressive surfing and fine-tuned fundamentals.