Kelly Slater's love affair with golf has been lengthy and well-documented. But less discussed is how some pro golfers like to trade links for the lineup. Rafael Cabrera-Bello: Pro on the links, not half bad in the surf. - WSL / Todd Glaser

Monday in Lemoore, Califs., two PGA players revealed not only their affection for surfing, but also their skills when they took a swing at the WSL Surf Ranch. Both golfers, Spanish pro Rafael Cabrera-Bello and Australian Adam Scott, have surfed for years. Yet, while they've brought Slater into their world at esteemed events like the Ryder Cup and Pebble Beach, this was first time they got to play in Slater's sandbox.

"I had seen videos of it [the Ranch] on YouTube," Cabrera-Bello said, after spending the morning in the wave pool. "I was obviously very excited and also a bit nervous, because I trust my skills when I play golf, but obviously here I don't want to make a clown out of myself. "But it's been so, so much fun. This is in my top three things for sure of best things I've ever done. I'm very thankful that we have had this opportunity, it's just so special. If you love surfing, you learn so much here. The feeling is so good, it's hard to describe."

Scott, for his part, was equally wowed -- and not just by the wave.

"I've been surfing for the better part of the last 20 years, traipsing around the globe, looking for where there aren't too many people to snake me out of a wave," he said. "Then you come here, and all morning, it's just a perfect wave. It will be fascinating to see what it does, it will be so easy for so many people now to really pick up the sport, a little easier than having to be out there with 50 other people in the lineup." 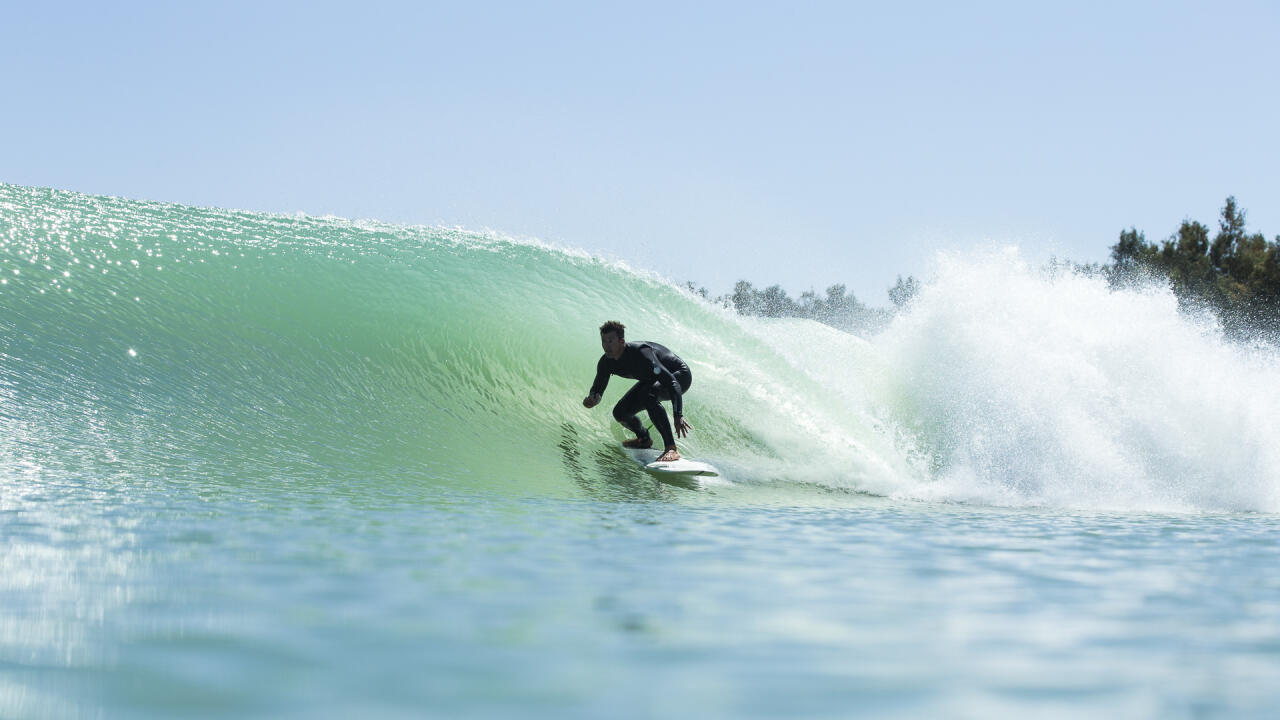 For both golfers, surfing -- no matter where they are -- has been a salty antidote to the pressures of pro golfing. "It's been a great way for me to re-energize and be out there in the water," said Scott. "For a while, I was really competitive with myself with surfing, wanting to improve and get better. And then, the last five or six years, I gave up on all that. I found my limits, after nearly drowning a couple times. [Now], I just enjoy it. This morning, it was two waves, and I was really happy, especially after a long week playing in the Masters."

And yet, for Cabrera-Bello, moving from the Masters to the wave pool wasn't such a big stretch. The physical components of swinging a club may not mimic a those of catching a wave, but there might just be a parallel in terms of mindset. Unlike a casual day at the beach, though, there was another bonus of being at the Surf Ranch: its star owner. Yes, catching a wave is what every visitor longs for -- but watching the sensei himself is a close second.

"I've watched Kelly surf a million times on TV," said Cabrera-Bello. "But sitting on the jet ski and watching him surf a couple yards away and looking at him, I mean -- maybe when other people look at us and think, ‘You hit the ball so easily,' I never really understood it. But to look at him and watch him make it look so easy, when I know it's not, is mind-blowing."

Witness the WSL Surf Ranch yourself at the Founders' Cup of Surfing May 5 - 6. Tickets available here.

In Rio de Janeiro, Brazil, Kelly experiences the biggest crowds and most passionate fans on tour. As he battles through another superheat