Editor's note: Get your feet wet with WSL Fantasy Surfing next with the Corona Open J-Bay starting July 2 local time. Sign up with Facebook, Google or your email in one step. You can make your J-Bay picks as soon as the draw is finalized in the weeks leading up to the event.

If Johanne Defay carried your WSL Fantasy team to victory at Uluwatu, You deserve it, because only one of every 20 Fantasy players picked Defay out of the heavily stacked Tier B pack for that event (which started at Margaret River). Six of the eight surfers in that tier were more widely held than Johanne, who had just five percent. And while Defay had proven herself at Margaret River in the past, her powerful backhand attack proved to be a huge bonus when the venue moved to Bali.

And she wasn't alone. Tatiana Weston-Webb gave her believers a nice points payout, too, but with 18 percent of players owning Tati -- versus just 5 percent for Johanne -- those gains were more widely distributed. Still, when it comes to delivering for her shareholders, Tati's outperformed expectations more than anyone this year. By contrast, both Tyler Wright and Carissa Moore, who are typically held by more than 60 percent of players, have been the cause of much fantasy frustration. They're consistently the top picks out of Tier B, yet both fell 20 points shy of Johanne and Tatiana, which is a fatal gap in Fantasy world. The lesson here is simple: being too conservative with your picks can be just as dangerous as rolling the dice. Being brave enough to bet against popular opinion is a huge part of winning your Fantasy game. To that end, today we offer you the list of women who are outperforming some of the Tour's higher-profile picks. 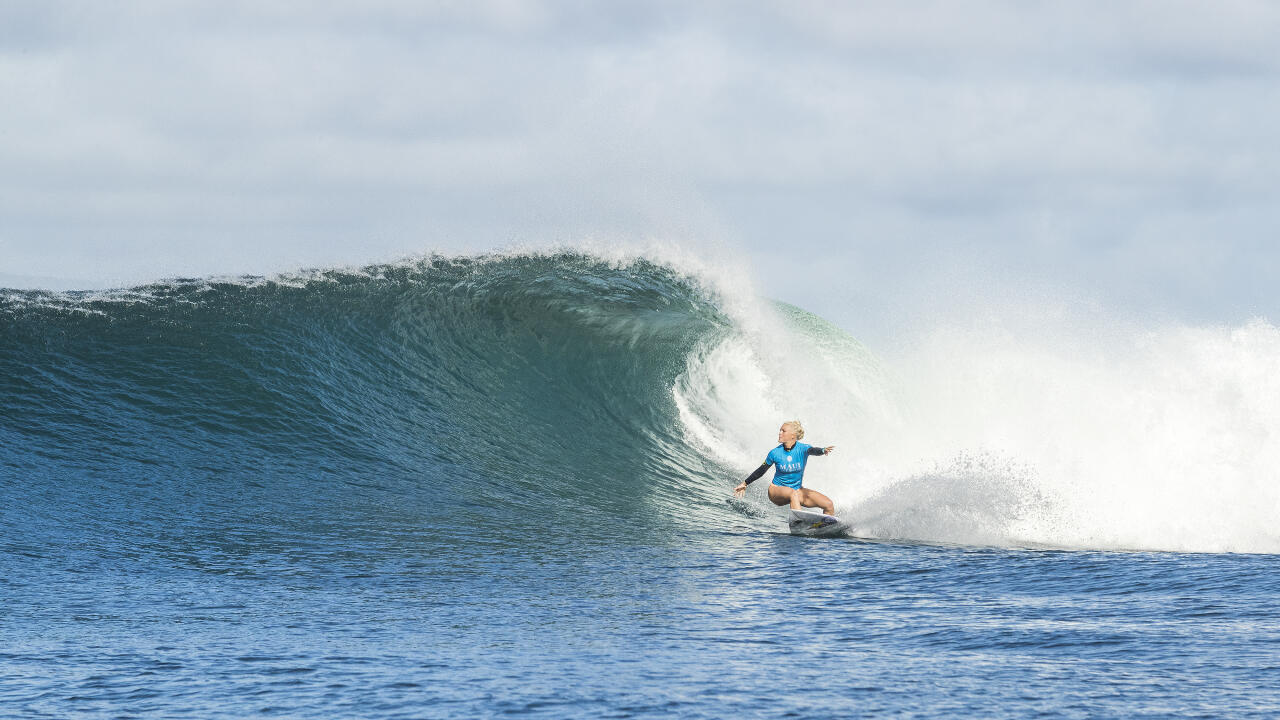 Tatiana Weston-Webb has put herself right in the hunt for a World Title this year with her solid surfing. All the while she's been giving her Fantasy backers a huge boost. - WSL / Kelly Cestari

1.) Tatiana Weston-Webb
Average Points Per Event: 62.36
Average Fantasy Ownership: 21.25 percent
Yield: 41.11
After a lackluster result at Snapper, the first event of the year, Weston-Webb has been on a quiet tear, climbing into the No. 3 spot on the Jeep Leaderboard with an impressive streak that includes runner-up finishes at Bells Beach and Uluwatu, and Semifinal finishes at Saquarema and Keramas. All the while, she's been one of eight surfers to choose from in Tier B for Fantasy players, where she's nabbed just under 20 percent of the picks. With her jump into the Top 3 now, Tati will be graduating to a very stacked Tier A at the Corona Open J Bay, where players will be asked to choose among her, Lakey Peterson, and Steph Gilmore. Defay's huge victory at Uluwatu was a welcome gift to the players who originally picked her to do well at Margaret River. But she's delivered precious points at Bells, Snapper and Saquarema, too. - WSL / Kelly Cestari

2.) Johanne Defay
Average Points Per Event: 45.18
Average Fantasy Ownership: 6.92 percent
Yield: 38.26
Defay's win has put her back on pace to match her career-best ranking that she achieved in 2016, when she finished No. 5 in the world. While she's been knocked out twice by rookies this year, she's only lost early once. Her win at Uluwatu was her first big headline of the year, she's but she's also managed to rack up some solid points for the small set of true believers who've bet on her. While she's likely to get a bit more attention after her win, chances are she's still going to be a high-yield pick. Caroline Marks has made a massive impression so far during her rookie season. - WSL / Kelly Cestari

3.) Caroline Marks
Average Points Per Event: 46.22
Average Fantasy Ownership: 12.56 percent
Yield: 33.62
The Floridian rookie is making a huge impact this year, proving that her early success was no fluke with several trips to the late rounds. She's scored big wins against the world's best along the way, proving she's got what it takes to stick around. One reason why she's been a valuable pick for Fantasy players is she hasn't once lost in the first round of elimination so far, while averaging just 12 percent of the picks. With two wins already under her belt in 2018, Peterson is enjoying her personal best as a pro, and those who've let their Fantasy bets ride with her have been rewarded. - WSL / Kelly Cestari

4.) Lakey Peterson
Average Points Per Event: 62.32
Average Fantasy Ownership: 31.08 percent
Yield: 31.24
Tier A is not an easy place to get votes. Only the Top 3 surfers are in that pack, and Fantasy players can only pick one of them for their squad. After winning the Roxy Pro at Snapper, Lakey's been a fixture in the Tier A group, which has pitted her against Stephanie Gilmore for much of the season, and it's hard to bet against the six-time Champion. But with two wins under her belt, Lakey's enjoying a breakout season, and those who've been betting on her in Tier A have been richly rewarded with points, separating themselves from the rest of the pack along the way. Keely Andrew hasn't been a huge headline grabber, but those tracking her success are well aware of her improved results and growing confidence. - WSL / Daniel Smorigo

5.) Keely Andrew
Average Points Per Event: 33.774
Average Fantasy Ownership: 4.57 percent
Yield: 29.204
Andrew's season got off to a sizzling start at the Roxy Pro, where she ripped her way into the Finals for the second time in six months, and finished runner-up to Peterson. While she's been less consistent than the rest on this list, with less than five percent of players picking her up the payoffs are sizable with each and every heat win. Since joining the Championship Tour full time in 2016, Andrew's been on a slow, steady climb up the Jeep Leaderboard. While she's currently sitting in the No. 10 spot, one better than where she finished last season, Andrew's act is getting more respect every day. Early adopters to her camp on the Fantasy side have been rewarded nicely.

Catch the first-ever women's Corona Open J Bay live daily on the WSL and Facebook July 6 - 16. Make your Fantasy picks here once the draw is finalized.