Highlights: Quarters Set on Day 2 in Sopela
2:37
The Junior Pro Sopela goes through another massive day of competition and multiple upsets to only keep eight men and eight women for finals day.

Competition continued on the second day of the waiting period at the Junior Pro Sopela. Waves stayed in the two-to-three foot range this morning and although the dead low tide wasn't quite as good, surfers found sections to capitalize on.

Another long day allowed event officials to get through the heavier rounds and decide the event's Quarterfinalists. Finals day could happen as early as tomorrow.

The men's field suffered an incredible number of upsets again today with the likes of Lenni Jensen, Gaizka Housset Ezponda and Yael Pena bowing out early. But the two more shocking eliminations were those of reigning European Junior Champion Kauli Vaast and current European No. 1 Justin Becret. Gaizka Housset Ezponda tears through the lip but can't compose a full heat and bows out in Round 4. - WSL / Guillaume Arrieta

Heat 1 of Round 5 was deemed the superheat in the absence of other big names, with Marco Mignot taking on up-and-comers Noa Dupouy, Kepa Housset Ezponda and Iker Amatriain.

But only Mignot really found the same rhythm he's been displaying all event, as he put on a convincing effort with two good scores while all three opponents struggled to break the average 5.0 barrier. The Frenchman is currently the highest ranked surfer still in the event and has a big opportunity to claim the lead. Marco Mignot has a shot at the rankings lead in Sopela. - WSL / Guillaume Arrieta

"I'm stoked to make it through today cause clearly not everyone did," Mignot stated. "I feel great and the waves are super fun. To be honest I don't really care who is in and who is out at this point. I'm here to win and I‘m here to beat whoever is in the way."

Sean Gunning took his act to the air today and made a couple of important heats to reach the man-on-man Quarterfinal for the first time in his young career. The young Spaniard landed a bunch of rotations all throughout the day, including a good alley-oop and a forehand rotator on back-to-back waves in Round Four. Erwan Blouin pushed his air game even higher and posted the day's highest score of 8.83 to make his way into the Quarters.

The women's event looked like it was going to pale in comparison when the current rankings leaders Nadia Erostarbe and Anat Lelior advanced through their heat together. "The waves were really fun and I got two good ones so everything went well for me in this one," Erostarbe said. "I really like coming here cause the waves have a bit of power so it's fun. And it's close to home, I only live an hour away so that's an easy one. I'll try my best to keep the rankings lead and finish well in Pantin."

Unfortunately Erostarbe later injured herself in a free surf and was forced to withdraw from competition before her Round 3 heat. As a result France's Neis Lartigue jumped on the opportunity to take the lead.

But sure enough, things started to go south soon after and the first blow came from Giada Legati who dispatched current European No. 3 Melania Diaz in Round Two. The goofyfoot, who was raised in Indo and lives in Argentina, turned a few heads today with great surfing during her first appearance on the European tour. 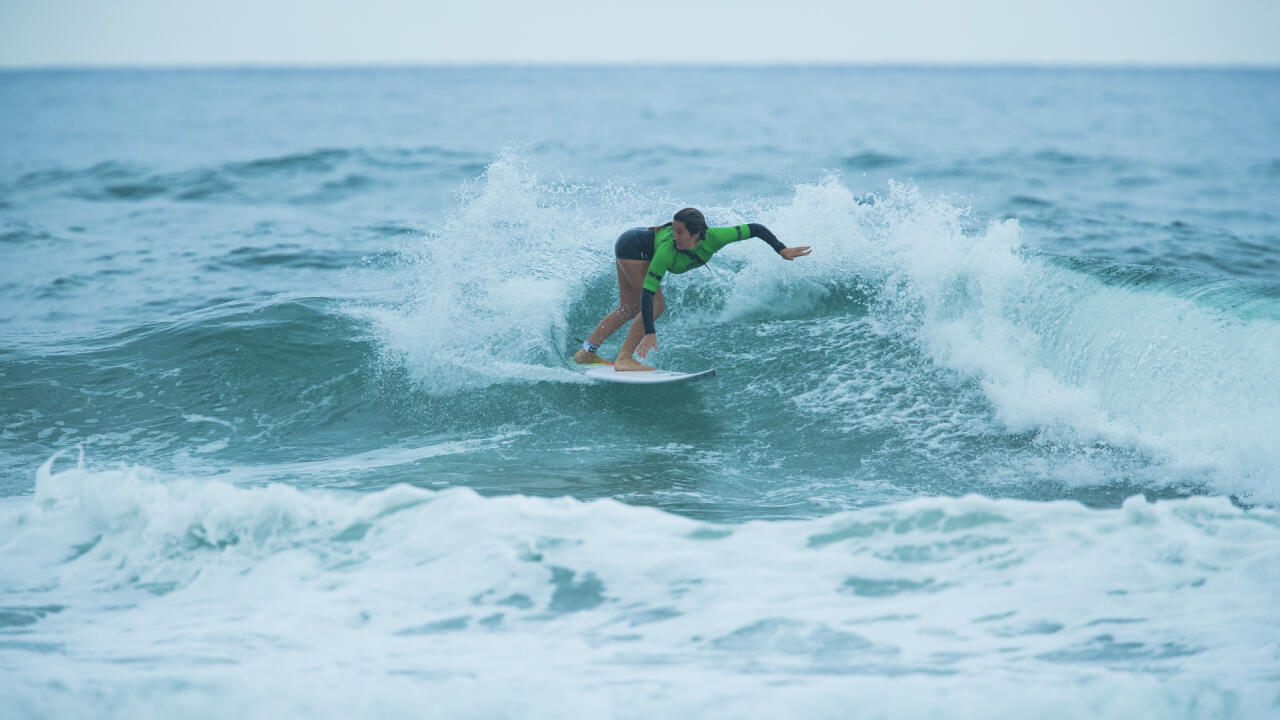 Giada Legati had a great couple of heats before falling short in Round Three. - WSL / Guillaume Arrieta

"I am going to Portugal after this so I thought I'd do a little bit of the European circuit while I'm here," Legati said. "I've never really competed before but I'm loving it so I'm sure I'll do more in the years to come. Hopefully I can make a few more heats and get a first good result in a WSL event."

Legati later couldn't find a decent score in her Round Three bout and was forced out in fourth position after being one of the most exciting surfers all day.

Local surfer Iara Dominguez continued that trend and took care of recent event winner Eveline Hooft later in the round. In her second ever WSL event, Dominguez dominated the day's Leaderboard with a solid 13.83 heat total for a spot into Round 3 and later advanced into the Quarters. Eveline Hooft surfed well but couldn't make it out of Round 3. - WSL / Guillaume Arrieta

Surfers and event officials will reconvene at 8:15 a.m Friday for a potential Finals day if conditions continue to cooperate.