A vital day of competition at the Paul Mitchell Neon Supergirl Pro women's Qualifying Series (QS) 6,000-level event unfolded as the final day draw is locked in. The world's best in attendance debuted with power and dominance among top QS threats, along with up-and-coming talents, despite a handful of upsets scattered throughout the day.

But, the Hawaii contingent raised the bar of competition among their fellow competitors and unleashed some of the event's biggest performances. Moore powered her way through her heats with clutch composure when needed and delivered. - WSL / Kurt Steinmetz

Three-time WSL Champion Carissa Moore did just that, earning two heat wins and capping her day off with a superheat against defending event winner, and CT veteran, Courtney Conlogue and fellow Oahu, Hawaii, competitor Zoe McDougall. Moore stamped her authority with an 8.00 (out of a possible 10) and ended with a brilliant 14.83 (out of a possible 20) heat total. Though Moore hasn't cracked beyond a Quarterfinal on the CT just yet in 2018, a big result here could be another vital spark for her.

"I'm so stoked to get back in the water and feel out the Southern California beachbreak banks," Moore said. "There's been a different approach every year and it's a great time to try different maneuvers, strategies, and gain some confidence. It's awesome to see who's up-and-coming as well, there's girls from all over and that's exciting to see that they're really getting into from all over the world -- that's what surfing is all about and I love to see more of it."

Next Generation of Hawaii Surfers: Brisa Hennessy Steps Up 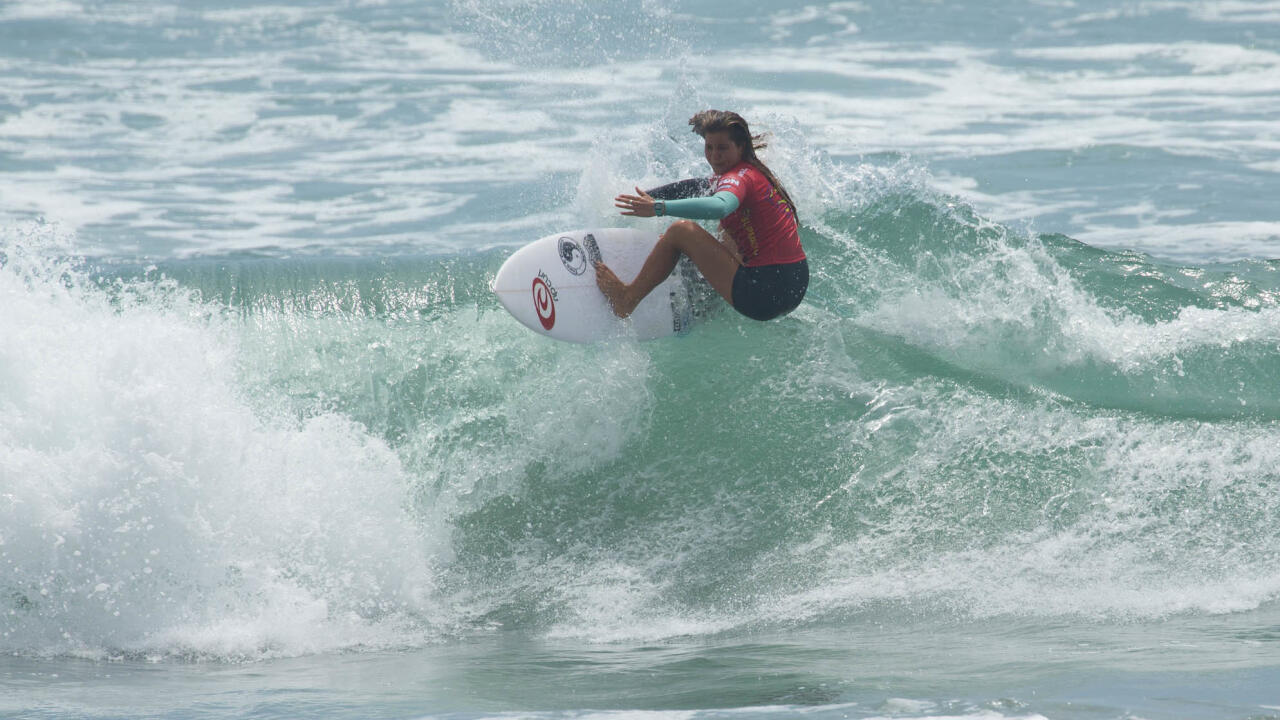 Brisa Hennessy represents the movement of up-and-coming competitors beginning to find their footing on the QS toward CT qualification -- and she showed that today with two brilliant performances. The 18-year-old put aside her last year as a Pro Junior and is chasing the Dream Tour, making good headway after earning a 3,000-point win in South Africa before coming here. But, Hennessy knows there's more work left and needs another big result here in Oceanside.

"I haven't done this good here since I was 14 when I made the Quarterfinals and just have to keep the positive vibes going," Hennessy said. "I've learned it's important to stay in the present moment and not look to far ahead, the QS is an amazing thing and I'm just trying to enjoying it. This is great practice for someone who's trying to get on the CT with all of them here. It gets me fired up and inspires me -- I'm surfing against my idols and it's incredible." 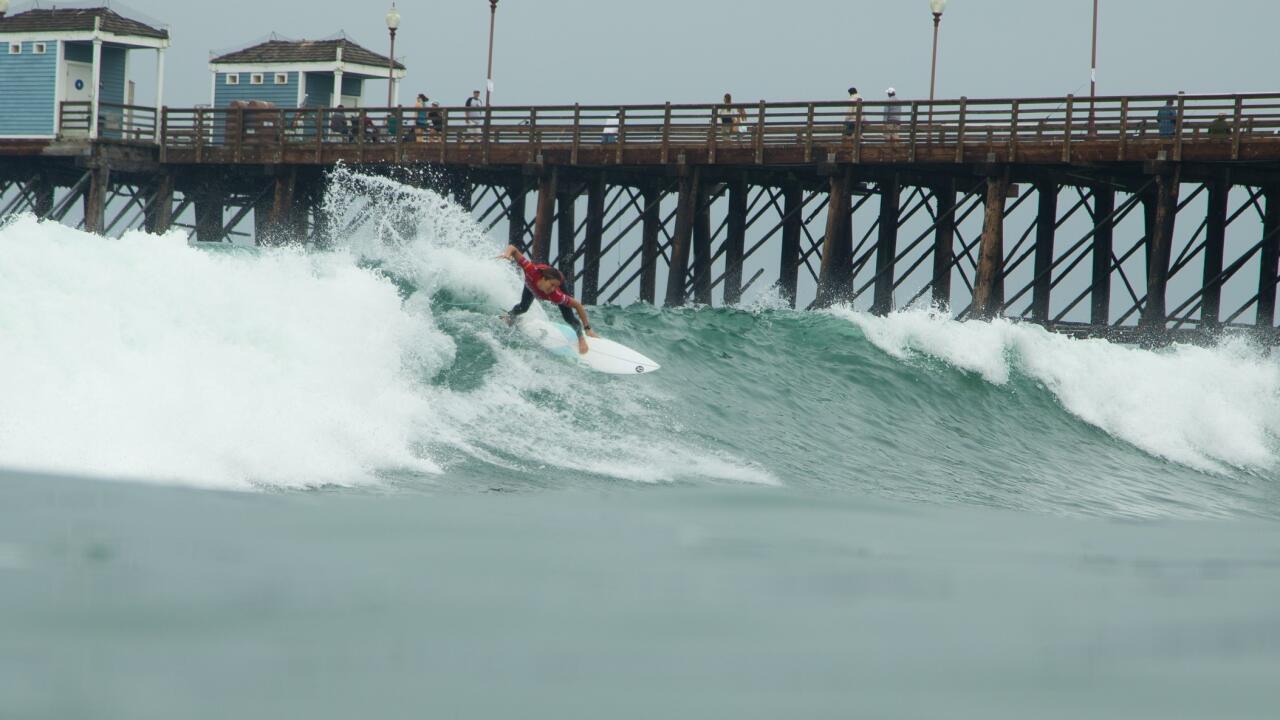 Malia Manuel is looking for another cape and delivered a huge upset en route to a chance at doing so. - WSL / Kurt Steinmetz

"I was really excited to surf against two other CT competitors, I think it just pushes my limits and it's step one toward building confidence," Manuel said. "The end of last year and start of this year were positive with some good results, but the rest have been so-so. I think it's going to take not straying away from the challenge and finding that quality in both the wave and my surfing in order to win here again -- it's one of the best events to win for a woman." 2015 Supergirl Pro winner Tatiana Weston-Webb left everything in the water, but enjoying it all. - WSL / Kurt Steinmetz

But, it was fellow Supergirl victor Weston-Webb who obliterated the Oceanside lineup with the biggest performance yet -- a 17.33 heat total over QS No. 1 Caroline Marks and 16-year-old Rachel Presti. The Kauaian-born, now representing Brazil, surfer has found what it takes from herself to put together a full season and it continues to show each event.

"I just feel good and I'm having a blast this year, and I don't want it to stop," Weston-Webb said. "Here and the US Open are completely different events. I'm here to get dialed in, but also to encourage women to be superwomen. To win another cape means a lot. It means to succeed at something not a lot of people can while having fun doing it, and motivate women to hopefully want their own cape one day." California's own, current World No. 2, Lakey Peterson is back on home soil and looking to make it count while regrouping for an important back half to 2018. The Santa Barbara native started her Supergirl Pro campaign with a win against one of California's next big threats Alyssa Spencer, alongside Aussies Isabella Nichols and , in Round 3 before another California talent Meah Collins in Round 4. Peterson hasn't taken this event since her 2011 Pro Junior win and now looks to do so at the QS level -- and has the momentum of a great year to help propel her there.

"It would be cool to win this event at the QS since it's the only one I really do and it's amazing to be home," Peterson said. "This year's been incredible. I've just been enjoying myself surfing and competing, and just trying to continue to keep that ball rolling. It's insane the amount of girl surfers now and it's great to see that. It's great to come to an event like this where they're all so eager and want to do well, it's taken real seriously. The future is bright and it's fun to be part of it all."

Tune in LIVE beginning at 8:00 a.m. PST for Round 5 action to start finals day and see who claims the 2018 Paul Mitchell Neon Supergirl Pro cape.