The Paul Mitchell Supergirl Pro is a marquee event for women's professional surfing and continues to provide a platform for some of the world's best, along with the next generation of upcoming talent -- both of which were represented in a stacked Final Sunday. But, in the end, the coveted Supergirl cape belonged to three-time WSL Champion Carissa Moore after a captivating Finals day performance. 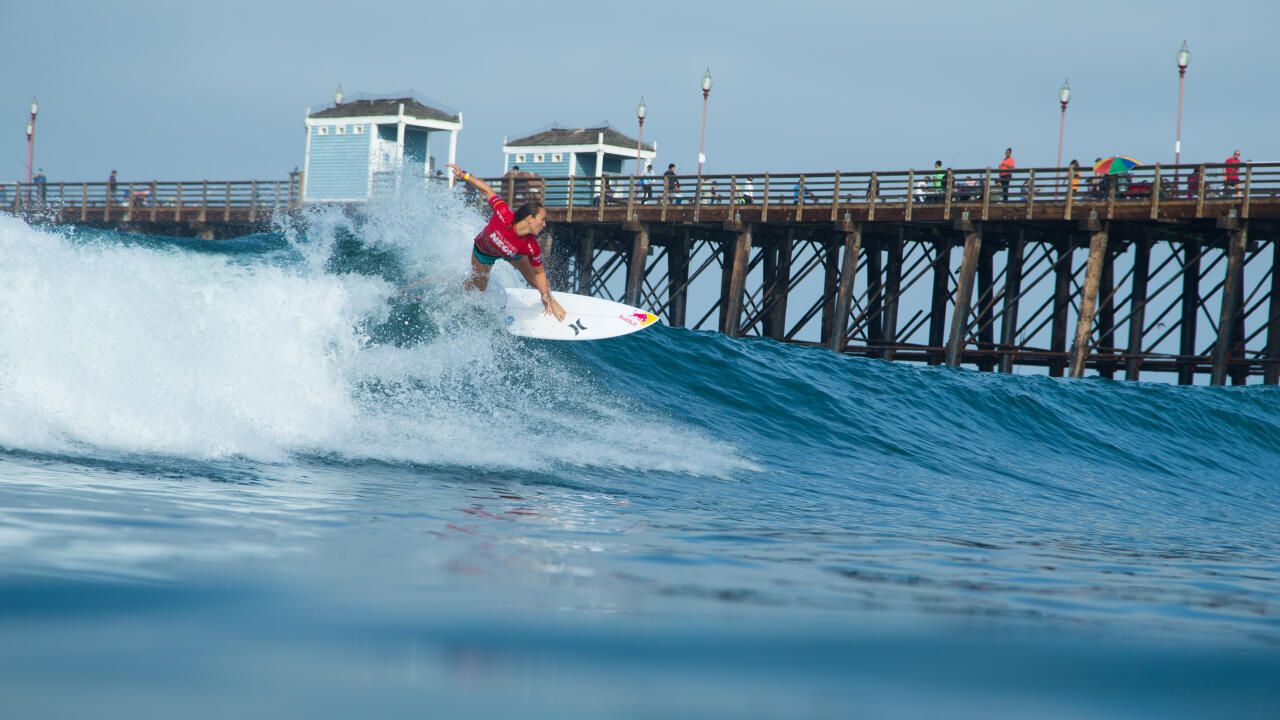 "I'm so excited to have my first cape and this is such a great win which I haven't been able to get all season," Moore said. "This is huge for confidence and I think I've just been over-complicating things in my mind so it's nice to simplify things. I was happy to play the game a little bit better than I have this season. It felt good to keep making heats and I just wanted to keep my head down, and just enjoy the competition. When conditions are tougher like that, it's a more about the game then the performance so I just tried to embrace that." All smiles for one of the sport's greatest. - WSL / Kurt Steinmetz

A slow start to a highly anticipated Final kept spectators anxiously awaiting the opening exchange, but it was fireworks from then on. Moore opened up with her signature power surfing and earned a near-excellent 7.67 (out of a possible 10) to start, which Marks nearly matched with a 7.00 of her own. But, the Hawaiian added a 6.17 and put the pressure on which the young talent was unable to overcome -- though getting close with a 6.10 when needing a 6.85.

Moore showed her veteran experience throughout the day, taking down fellow CT competitors Bronte Macaulay in Round 5, Johanne Defay in the Quarterfinals and, one of Supergirl Pro's most consistent competitors, Malia Manuel in the Semifinals. But, the 25-year-old knows the work is just beginning. 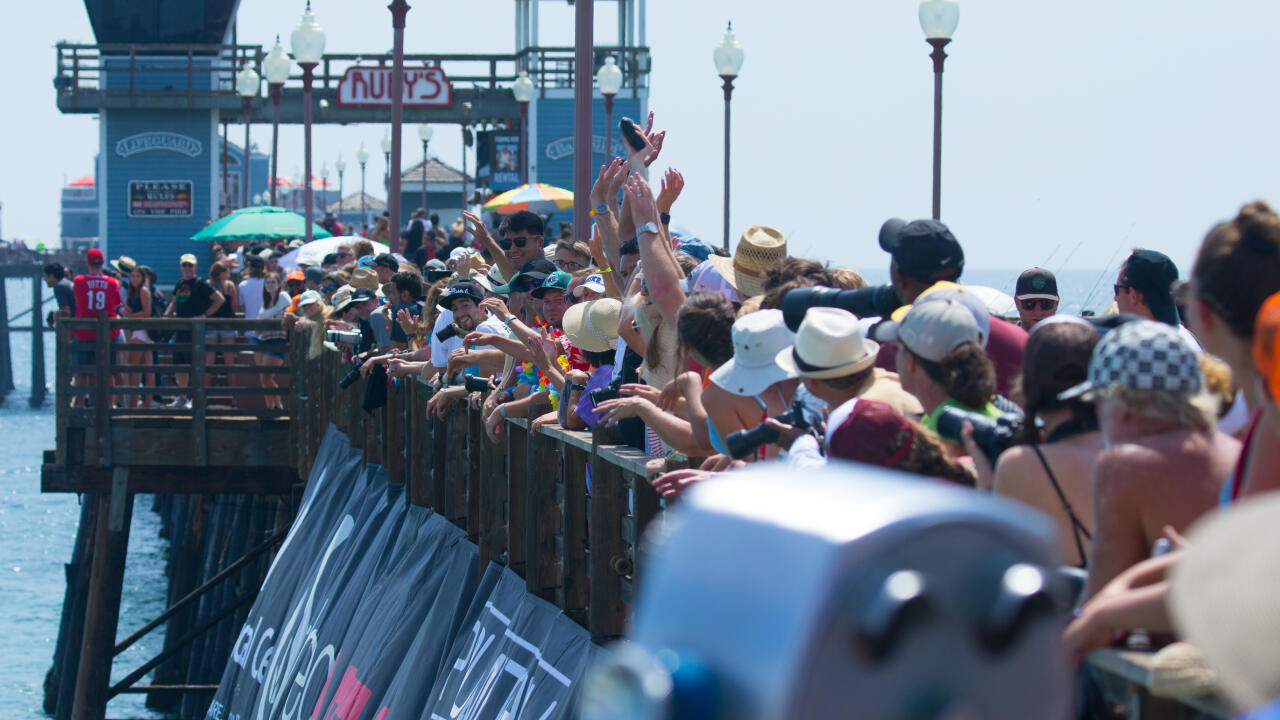 "Caroline [Marks] was a stand out that whole event and I knew the judges were liking what she was doing so it was going to be a tough Final," Moore added. "I just needed to do my own thing and hopefully the ocean was on my side -- which it was so I was stoked. I think the key is to stay present and know what you're doing. Everything past the first exchange you're surfing against yourself." Marks' lethal backhand has been unstoppable at the major QS events this year. - WSL / Kurt Steinmetz

Marks' 2018 continues to be the best in women's QS history -- already accruing 22,200 points -- and still has two more QS 6,000 events left. The San Clemente, California, resident, formerly of Melbourne Beach, Florida, blasted through Finals day with incredible performances over former CT competitors Alessa Quizon in Round 5 and Dimity Stoyle in the Quarterfinals. But, a heavyweight bout with former Supergirl Pro winner Coco Ho highlighted her day before the Final.

"I have an amazing family behind me, a great coach and some incredible surfboards under my feet right now along with just having fun," Marks said. "That's been the most important thing and being so young, there's no pressure which helps me just want to surf my best. I absolutely love competing and I'm having a blast this year. I was really close in that heat, but sometimes it goes your way and sometimes it doesn't, and I was really happy with the way I surfed so I'll carry that confidence into next week."

"To have a heat with Carissa [Moore] is great, I just had one with her in J-Bay and she's one of my idols, but now I'm trying to beat her which is funny," Marks added. "This whole event's been so much fun and she's an incredible surfer to end it against." Coco Ho's style and flow were big keys to her success this weekend at Oceanside's tough lineup. - WSL / Andrew Nichols

Nearly all the pieces fell together for Ho, former Supergirl Pro QS and two-time junior winner (as amateur event), toward yet another Supergirl cape. A strong start in her Semifinal match was met by an overpowering, in-form Marks who eventually took the win. Ho's impressive run started with a massive win over current CT No. 2 Lakey Peterson in Round 5 before taking one of the QS's top threats Philippa Anderson. Now, the North Shore, Oahu, native is ready to keep the momentum going as she now sits at No. 2 on the QS rankings to fall back on.

"It's crazy to think of the history when they say 2008 was my first victory, but I'm settling into being on Tour for eight years nowadays," Ho said. "To have someone like Caroline [Marks] so fresh and exciting, I'm just happy to be amongst it. Every event you enter you want to make sure you're getting something from it and to get those valuable points was really important for me."

"This was a heavy one with a lot of the CT surfers here, more than the norm, with Lakey [Peterson] and Steph [Gilmore] it made everyone surf even harder -- makes a third-place feel that much better," Ho added. Manuel looked poised for yet another Supergirl Final, but it wasn't to be against an in-form Moore. - WSL / Kurt Steinmetz

Manuel's track record at the Supergirl Pro is one of the event's finest alongside Ho, earning a finals day appearance every year since she's competed -- and a win in 2013. It was a Hawaiian battle as Manuel and Moore went wave-for-wave in a tight Semifinal bout, but Manuel found herself on the wrong side of .23 difference. But, the Kauai, Hawaii, native put together a brilliant run to her finish that included big wins over fellow Hawaiian surfer Brisa Hennessy and upcoming talent Mahina Maeda.

"It was nice to get that Semifinal even though the Final would've been great for those extra, much-needed points," Manuel said. "With Carissa's wave, it allowed her to do more of a closeout section hit whereas mine didn't so I think that was the difference there. It's great to see those next surfers and Brisa [Hennessy] comes to mind right away and I think she'll qualify soon which helps keep me motivated. But, I'm happy with this result and hopefully it's good rhythm to bring into Huntington where another positive result there would be great."

Highlights: Moore Ties On First Supergirl Pro Cape.
2:06
Check out all the action from finals day leading up to the three-time WSL Champion's victory.