As tomorrow marks day one of the 2018 Four Seasons Maldives Surfing Champions Trophy, competitors for this year's event have arrived at the sublime island paradise of Four Seasons Kuda Huraa. With a great looking forecast for the right-handers of Sultans, the race is on to see who will take out this year's installment of ‘the world's most luxurious surfing event.' With an illustrious career including a number of Airshow victories, over 10 years as a competitor on the elite Championship Tour (CT) and a victory on the WSL Big Wave Tour, Australian Josh Kerr is relishing the opportunity to compete at such a unique event. With his entire family in tow, Kerr has been soaking up the pristine environment surrounding Kuda Huraa while fine-tuning his new single fin and twin fin boards.

"This is such a dreamy event," Kerr said. "I went and surfed a single fin a spot not far from here with my daughter all morning which was cool then went sailing in the afternoon so not your standard event prep that's for sure. This place is just ridiculous, I wish every surf trip was at the Four Seasons; we're being so spoiled. I'm feeling pretty good about this event. I'm actually most stressed about the thruster division as I've only been surfing on twinnies and single fins for the last 6 or 8 months - this will definitely help me I think."

Hawaiian sensation Freddy Patacchia Jr. has returned to the Maldives for the first time in over 10 years. Known for his impeccable timing and speed on his backhand, Patacchia is looking forward to the challenge of competing on alternative equipment.

"Since I retired from the CT I have been surfing a lot more alternative equipment," Patacchia said. "I focused on surfing a thruster for my whole life so I've been loving surfing different boards recently and think this format will suit me. I did however leave my single fin at home accidentally so will be jumping on something borrowed, which will be interesting. The format of this event for me is definitely a breath of fresh air." Sierra Kerr enjoying a session in paradise with her dad. - WSL / Sean Scott

Fresh off a Round 4 finish at the Vans US Open of Surfing Qualifying Series 10,000 event, Alejo Muniz will be flying the flag for Brazil this year in the Maldives. Still battling to regain his spot on the CT, Muniz is honored to find himself competing amongst some of his heroes in the idyllic surrounds of Four Seasons Kuda Huraa.

"When I first qualified for the CT some of these guys were just finishing their careers so I definitely looked up to them," Muniz said. "Having the opportunity to come here and surf with them and against them again is amazing. I've been watching a few old videos of guys surfing single fins and twin fins just to get in the zone and work out how best to go about it. I recently had a baby boy and just got married two weeks ago so to come here with my young family is like a dream honeymoon; we feel so blessed." Local Maldivian wildcard Abdulla "Fuku" Areef has had the benefit of warming up at all of the perfect waves that surround Kuda Huraa for his entire life. In recent weeks though, he has turned his attention to the more traditional craft of competing against the world's best on the world stage.

"This is a real dream come true for me surfing in this event," Areef said. "Surfing against these legends will be such an amazing experience for me. I've been surfing a lot on twin fins so am looking forward to that but am not sure how I will go in the single fin. I just want to make the most of this opportunity and make sure I soak it all up." 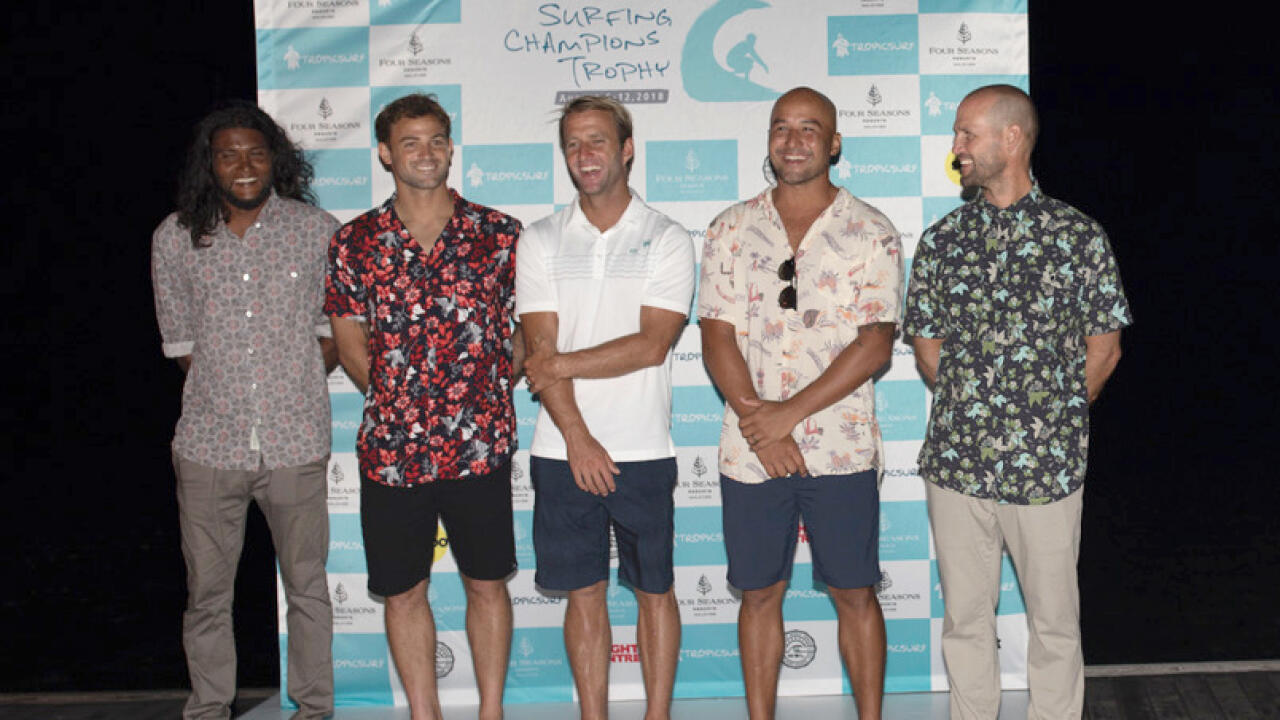 Returning to the event in 2018 is 2001 WSL Champion C.J. Hobgood who will be taking on fellow former CT competitor Bruce Irons in what is sure to be one of the most exciting battles of the event 8-year history.

Tropic surf founder and event director Ross Phillips has had over 20 years of experience surfing in the Maldives. Phillips believes that this week forecast is pointing to excellent conditions at Sultans.

"Tomorrow we have a fair bit of swell but relatively strong winds," Phillips said. "For the rest of the week the swell drops a little, but not too much. The wind continues to drop as well so it looks like it will be a great week of surfing with plenty of scope for good waves. We're unsure if we will kick off first thing tomorrow or wait for the lighter winds that are coming later in the week. One thing is for sure there is bound to be some amazing performances on boards from the 70's, 80's and today." Stay tuned in the coming days as competition gets underway with the opening single-fin division, where competitors will wind back the clock and draw similar lines to the legends of yesteryear.