Highlights: Mignot and Tuach Lead into Finals Day in Lacanau
2:19
The Caraïbos Lacanau Pro continues with the final four-surfer heats and decides the quarterfinalists in both men and women divisions.

The Caraïbos Lacanau Pro continued in similar three-to-five foot surf with a moderate side-onshore wind, and ran through multiple rounds of both men and women divisions to set up an exciting finish Sunday.

Straight off a win at Boardmasters last week Andy Criere continued to tear through the rounds with three heat wins in Lacanau to move into the quarters. The Basque surfer jumped 50 spots on the QS rankings with his last result and eyes another performance by tomorrow's end of day. He also posted the day's upset in eliminating Jorgann Couzinet from competition. "I've surfed heaps these past few days up and down the coast," Andy said. "I tried to find the right banks depending on wind and tide and all this work of adapting is paying off. I surfed on the lefts when the other guys stuck to the rights and made a difference there. It's one of those heats where the main thing is to get through, no matter how, and I made it happen."

Nomme Mignot has good memories in Lacanau. In 2015 he almost reiterated Gabriel Medina's feat of winning the junior and QS divisions the same year but was stopped in the final of the QS. Today he killed the competition in Round Six, posting two high scores right away, and spent the remainder of the heat trying to land a superman air! Lacanau delivered a few bombs this morning, and even one of barrel section. Adrien Toyon on this left. - WSL / Laurent Masurel

"I feel like I'm coming back strong this year after two average years," he said. "I love those lefts with the wind in it, it's so much fun for us goofies. I did a good air at the beginning and I really wanted to go higher and better but never got the section I was waiting for. The previous heats were low scoring so when I got my first two scores I felt like the job was done and I could relax a bit. Jorgann has been a huge inspiration for us Frenchies, he fights so hard all the time and shows us that everything's possible."

In the women's event, another former winner as a junior Lucia Martiño used her experience of the changing peaks, tides and currents to select the best option and distance herself from her opponents. The Spaniard ended up with the two best scores of the heat and a comfortable lead over France's Cannelle Bulard to move into the quarters. "I'm super happy to make the quarters here in Lacanau where I really enjoy coming every year," Lucia said. "We were watching the lineup with Rafa (Teixeira) and realized the main peak wasn't easy with a lot of closeouts. And we saw that option to the North with a good left. I'm surfing well on my backhand at the moment so it was the decision to try my luck there and thankfully it worked out perfectly."

Former CT athlete Chelsea Tuach was the other standout in today's women's competition, posting a large win over Mahina Maeda to advance into the final four. She posted the highest single score of 7.73 and combined heat total of 13.90 and will meet Bulard in the quarters. The two have already met in Round Three and it was the Reunion Island surfer who took the win, Tuach will be hoping for a different result when the event resumes on Sunday. 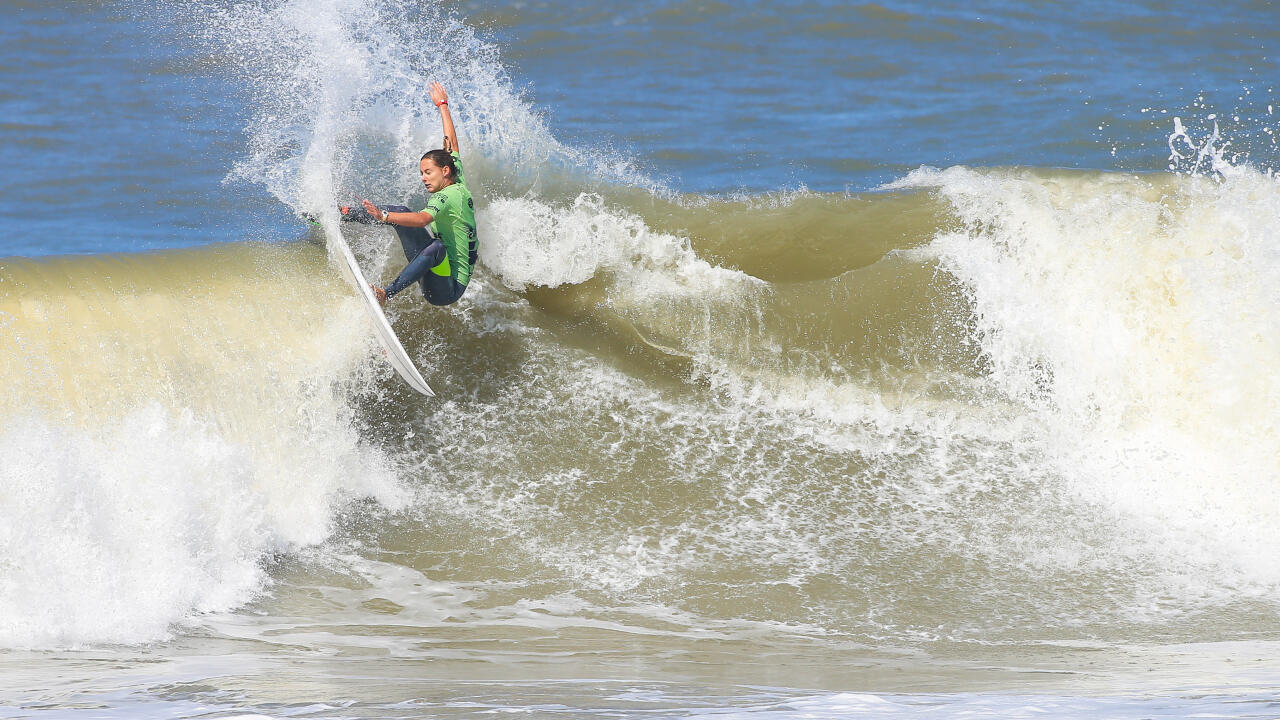 Chelsea Tuach will look for a strong finish such as this one in the finals on Sunday. - WSL / Laurent Masurel

"My mom and I came together to Europe and we're loving it!" she said. "It's actually my first time in Lacanau and it's such a nice beach town, I've been here for about a week, surfing and hanging out and I really like the waves. In 2015 when I won Pantin I went to Anglet and even though I didn't do so well there, I felt like having that preparation helped a lot. So that's why I'm back to France early to try to build momentum going into this big event in Spain."

Surfers will be back at 7:45 a.m Sunday for the finals of the 2018 Caraïbos Lacanau Pro.

The Caraïbos Lacanau Pro resumes and all of of the event's top seeds enter the show. Spoiler alert: not all of them make it through!