Highlights: Insane Action on Day 3 in Ericeira
2:26
The EDP Billabong Pro Ericeira resumes in pumping surf and the level of performance goes through the roof.

It's what we've all been waiting for, some of the world's best surfers lighting up pumping Ribeira d'Ilhas rights. The QS10,000 EDP Billabong Pro Ericeira resumed and this time the swell was there, pulsing six foot sets with a lot of sections to work with.

Pressure rose up a notch when we moved into Round Three, the last round featuring four-man heats cutting the field down to just 24 from the original 112 that started in Ericeira.

Griffin Colapinto didn't take his foot off the gas even the slightest and posted his second win with a scoreboard over 16 points. The Californian picked up the best waves and put on a clinic, mixing drawn out carves and tail slides to post the highest combined total of the event so far.

"Except for Hawaii, these are the best waves I've ever surfed in a QS for sure," Colapinto said. "Perfect rights, wave after wave and consistent. There were enough waves for everyone to get a good one, so whoever finished and comboed them nicely would make it through."

Ricardo Christie in the following heat and Sebastian Zietz in Heat 3 both found an excellent wave of their own, Christie with a little cover up and the Hawaiian releasing his tail above the lip on a couple of manor maneuvers. They respectively eliminated World No. 27 Yago Dora and perennial threat Stu Kennedy.

"I'm stoked the last few events are on great waves cause we're dealt a pretty tough hand on the QS," Christie said. "I'm sitting on the bubble so every point counts and everyone's got really mixed results," Zietz explained. "Pressure's on on that bubble and it wouldn't be smart at the end of the year if I didn't back myself up on the QS so I'm happy to be here and when I heard the event moved to Ericeira I thought it's just the cherry on top!"

In his second year on tour, Joan Duru sits at the very bottom of the Top 34 and needs a major move on the QS if he wants to keep his spot among the world's best. His aggressive backhand suits the wave perfectly at Ribeira d'Ilhas and after a relatively slow start, the Frenchman shifted gears to post a 9 point ride and tie with Ethan Ewing for the event's best wave.

Joan Duru cracks the 9 point range with vicious backhand attack.
0:28
Joan Duru performs a dozen major turns on his backhand for a 9.00, the highest single number of the EDP Billabong Pro Ericeira at this point.

"I was a bit nervous cause with waves that good I didn't want to lose," Duru said. "I was watching videos of Occy at J-Bay a couple days ago and I wanted to emulate that. Surfing like Occy is nearly impossible but I'll settle for 40% Occy in my surfing."

But Ewing wasn't ready to share the top spot and in the following heat the Australian went near-perfect with a John John-esque combo of big arcs and snaps for a 9.57. Connor O'Leary mimicked Duru's approach for an 8.57 and advanced in second.

Ethan Ewing's near-perfect 9.57 in Round Three
1:14
Ethan Ewing goes near-perfect with a crazy combination of forehand carves and snaps for a 9.57 and his spot into Round Four.

The following heat was slightly less gifted with big sets but the battles at work were intense between Gabriel Medina, Jorgann Couzinet and Marco Fernandez all finishing within .07 of each other and the first two actually tying for first place.

"It feels good to be competing here to keep the ball rolling," Medina said. "Of course I'm more relaxed but I want to do well. The next two events in Hossegor and Peniche are really important for me so I want to keep a good rhythm. It's awesome being here, I feel pretty much at home and I didn't know there were so many fun waves around." 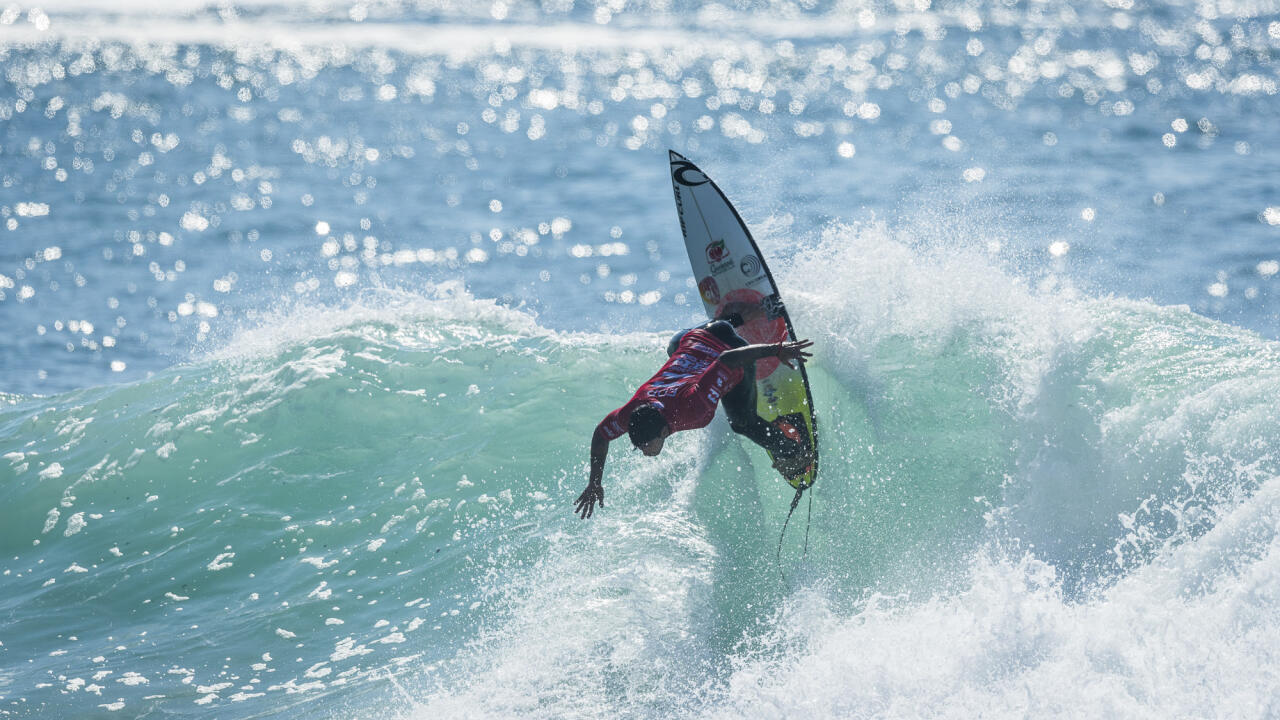 Kanoa Igarashi only stood up twice in his heat but made it count big times, with a three-turn combo on his second wave for an 8.93 and a large win over good friend Leonardo Fioravanti.

"I surf this wave a bunch and when you get the right one, the lip's pretty much telling you to hit it!" Igarashi said. "I feel like everything's going my way at the moment, waves come to me and my boards feel amazing so if I lose it's definitely my fault."

Earlier today, Portugal's Frederico Morais and Vasco Ribeiro made it through the second round and will be up in the last two heats of Round Three when the event comes back to defend the home nation's colors. Another early call will see surfers at 7:20 a.m Friday to continue in expected great conditions again.

The EDP Billabong Pro Ericeira moves into the man-on-man format to decide the event's first quarterfinalists in tricky conditions.

Soak in the Caribbean vibe with a few great shots from last year at the Martinique Surf Pro.