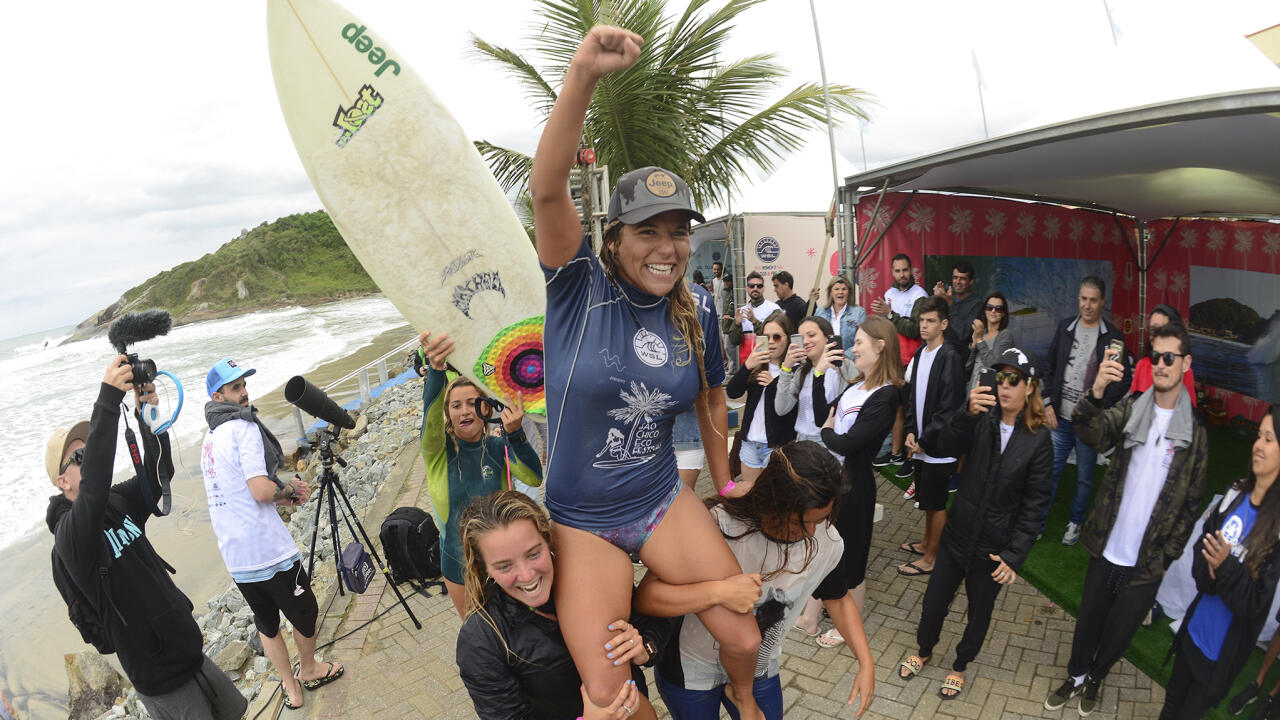 "This feels amazing," said Giunta. "Monik (Santos) is an incredible competitor and I knew I had to surf my best to beat her. Before my heat, Mimi (Dominic Barona) told me to go out there and have fun because I had nothing to lose. I tried to follow her advice and thankfully everything worked out perfectly."

The Peruvian felt right at home in Brazil and was delighted to win her first QS event at the São Chico Eco Festival.

"This is my first win on the Qualifying Series and I'm so happy that I was able to do it in Brazil because this is like my second home. I've always felt comfortable here. It's been a struggle this year and I feel like I've been able to snap out of it at this contest. Now I feel ready for the next few events coming up," concluded Giunta. Despite an extra day in the waiting period, event organizers opted to take full advantage of the conditions with light winds and waves in the 3-5 foot range (1-1.5 meters) to determine the event winners.

In the Final, Giunta took an early lead by throwing a series of powerful maneuvers on her first meaningful ride for a 7.67 - the highest of the event. She quickly followed with a 6.43 for a 14.10 total to edge out Santos with an 11.34 on her two best rides.

Monik Santos had been on quite a tear recently which included a victory at the QS 1,000 in Rio de Janeiro this past weekend and cemented it with a runner-up result in São Chico for a solid finish to the second to last Women's QS event in Brazil for 2018. The talented surfer from the Northeastern coast of Brazil has benefited from her dedication and commitment to bettering her craft. "Of course, I would have liked to have won two events in a row, but unfortunately, I only found one good wave in the Final," declared Santos. "But I'm still focused and training hard because my overall objective is based on the next few events."

WSL South America has made it its mission statement over the past few years to bolster Women's surfing in regional QS events as well as developing talent on the Pro Junior Tour. Having former pro surfer Marina Werneck spearhead this movement has helped bring attention to a market with huge potential.

"I'd like to congratulate Marina (Werneck) for putting on such an incredible event," continued Santos. "The attention given to the athletes, meals, location…everything was perfect. All the girls were super stoked because no other event in Brazil had the same amount of support and structure. So, thanks Marina and I hope these types of events can continue to grow in Brazil." 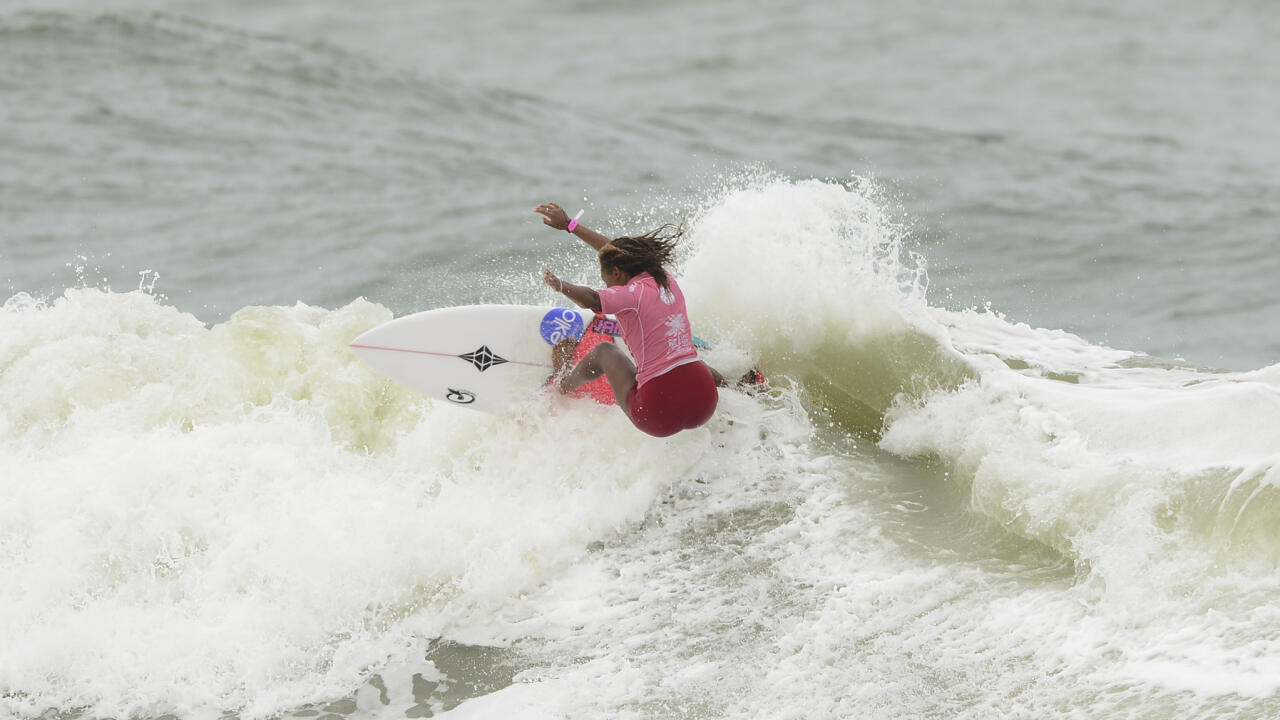 Things are starting to heat up in the race for the 2018 WSL South America Women's QS Championship. Dominic Barona (ECU) continues to dominate the standings with a commanding lead of 4,310 ranking points. However, after her victory, Melanie Giunta jumps into second place with a 2,260 total. Things get bottlenecked from 3rd to 7th on the rankings with Monik Santos, Camila Cassia (BRA), Lucia Indurain (ARG), Tainá Hinckel (BRA) and Yanca Costa (BRA) all close behind. The continental title is still up for grabs with only 3 events left on the WSL South America calendar.

While the regional title is yet to be decided, the WSL South America Pro Junior Titles were finalized at the São Chico Eco Festival. The defending Champion, Sol Aguirre (PER) won the first Pro Junior event this year held in Peru, however she was eliminated in São Chico in the Semifinals by the eventual winner Catalina Mercere (ARG). In the other Semifinal, Tainá Hinckel, the promising young surfer from Brazil was defeated by another talented up-and-comer from Peru, Daniela Rosas in a low scoring affair of 10.50 to 5.25 in favor of Rosas.

Conditions continued to deteriorate in the afternoon as the finalists took to the water. Rosas struggled to find two waves with mid-range scores of a 5.67 and a 4.00, but Mercere found the best waves, including a 7.33 to take the event win with an 11.33 total.

"Wow, it's amazing to have gotten the chance to surf such a fun wave and this is my first significant victory in my career," said Mercere. "Unfortunately, I didn't get much of an opportunity to show what I can do at the other event in Lobitos (Peru), but I'm super stoked to have won here. This is my first time to São Francisco do Sul, and it's a beautiful part of Brazil. You can tell that the waves can get really good here with the right conditions." With her event win in Peru and runner-up finish in Brazil, Sol Aguirre clinched the 2018 WSL South America Pro Junior Title at the São Chico Eco Festival. This is the second consecutive year that Aguirre claims the Regional Pro Junior Title in Brazil having won it last year at Guarda do Embaú. Aguirre along with Daniela Rosas will represent the South American team at the WSL Pro Junior World Championship in Taiwan later this year.

"Oh my God, this is unbelievable…it's incredible!" exclaimed Aguirre after celebrating with her friends on the beach. "I was upset that I didn't make it to the Final because I made a priority mistake. But this definitely makes up for it! I'm proud to be part of the team representing our continent and Peru. This just shows how far we've come in the sport and we're ready to do our best in Taiwan." In addition to Aguirre and Rosas, the four athletes in the Men's division that will be competing in Taiwan are - the 2018 WSL South America Pro Junior Champion Samuel Pupo (BRA), as well as Eduardo Motta (BRA), Jhonny Guerrero (PER) and Raul Dañino (PER).