The Nazaré lineup was eerily empty today. The same giant wedges that provided all the drama for the Nazaré Challenge were still exploding on the flat-packed sand, just without any surfers hurling themselves over the steep walls. The strong offshore wind may have had something to do with it. As did the fact that most of the competitors were recovering from yesterday's exertions at the Nazare Challenge. "I caught 20 waves yesterday," said the event winner Grant "Twiggy" Baker, "and every single wave takes so much out of you. I'm physically and mentally drained." However the main reason for the empty lineup was not because of what happened yesterday, but what might happen tomorrow with the oncoming XXL Swell. "The forecasted swell is bigger than it was for my World Record wave last year, although it is a more westerly direction," said Rodrigo Koxa. "I expect someone could break my record." That Guinness World record was officially registered at a height of 80 feet. No wonder then that all the surfers are resting and prepping for what could be a historic day of big wave surfing. It's not out of the question that some could ride a 100-foot wave.

Andrew Cotton, who along with Garrett McNamara was one of the early pioneers of Nazaré, however exercised a little caution over the forecast. "I've been through a few biggest ever forecasts in my time," said the UK surfer who has recovered from a broken back he sustained on the same day as Koxa secured the record last year (see below). "I've a theory that smaller swells with bit less period actually can refract more and give greater wave heights, but it's just a theory. As ever with Nazaré, you just play it as you see it."

Big Wave Awards Wipeout of the Year Winner: Andrew Cotton
1:04
Although this Nazaré beast almost took his life, the British charger not only survived, but plans to return to surfing.

However he is excited at the prospect of having some of the world's best big wave surfers joining the established teams. "Makua Rothman and Jamie Mitchell are going to come with Garrett and Hugo Vao and me so having those guys in the lineup can only help push the sport, continued Cotton. "Also the more people surf it the more respect the wave will get. The wave has been written off over the years, but when anyone surfs it, they realize just what this wave delivers."

"I'm predicting that it will just be a super-sized version of what we saw for the Nazaré Challenge," said Garrett McNamara. "Probably 60 to 80 foot faces, maybe even bigger. I'm hoping that the big rights out the back can come into play and we get to surf some massive, safe, waves." Those rights are break at spot the locals call Big Mama. That is located about 300 yards directly in front of the fort, but shows only on the biggest of swells. It was at the break that local legend Antonio Silva almost drowned four years ago. He was underwater for a nearly a minute and washed through the rocks at the base of the fort unconscious. Such was the force of the wipeout it ripped his both wetsuit and life vest off his body. He was eventually found by Koxa, who brought him back to life. In an interesting twist it was Silva who towed his friend into that 80-foot wave last year.

"We will all play it safe and look after each other," said Silva. "On days when Big Mama is breaking it's all about working with your team and staying patient. This is what we live for and we are all ready." 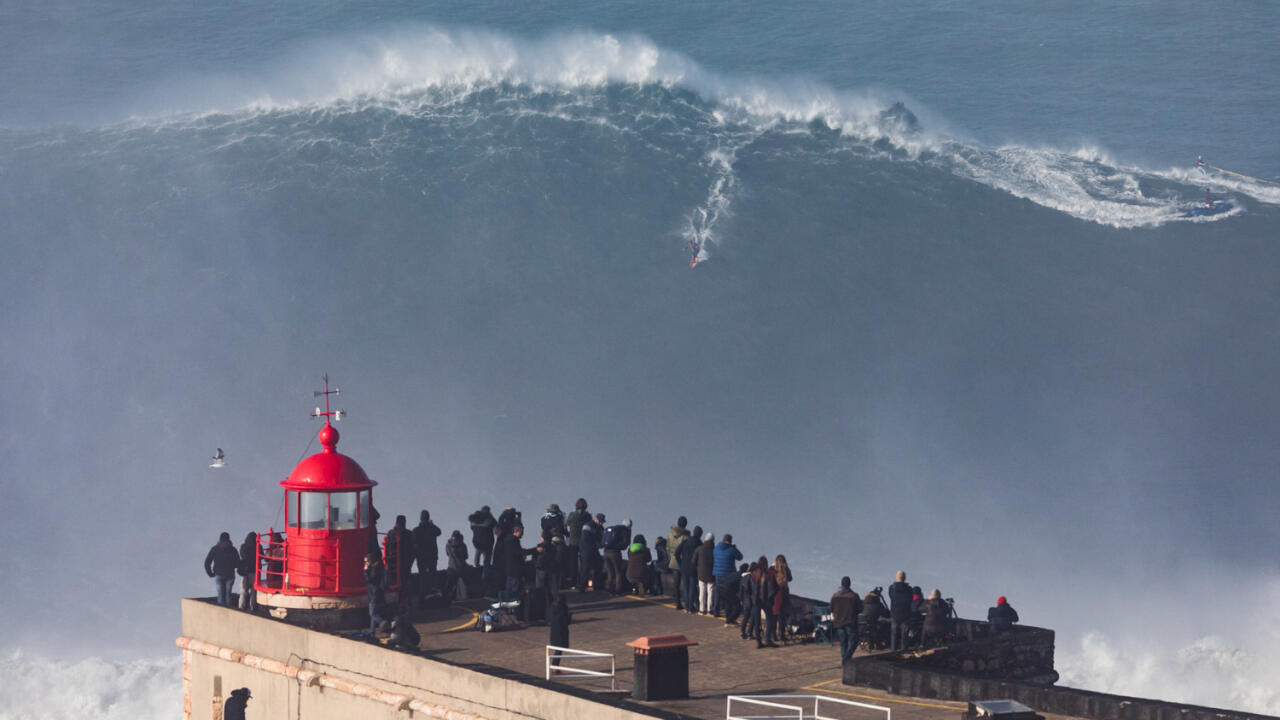 Justine Dupont also spent the day training and preparing for tomorrow's tow session. The Frenchwoman is doing her second full season in the town, and has been building a reputation as one of the most fearless surfers, man or woman, towing or paddling at the break.

"Nazaré is a tricky place to predict, but it looks there'll be some huge waves for sure. Monday looks great too, so I'm getting ready for two or three days of intense action," Dupont said. "I've been stretching and checking and double checking all our gear. We enter the ocean every day here and tomorrow will be no different. We'll just have to see what mother nature delivers."