Brief Overview: Still expecting plenty of surf, and likely throughout the entire event window. Several medium to strong swells are stacking up on the radar, along with mostly breezy ENE trades. The first day, Saturday the 8th, will see easing leftovers of the current NW swell, yet still overhead. Then a larger shot of new/solid NNW swell rolls in on Sunday the 9th. After that, possibly a relentless series of more swells through the rest of the event window, keeping surf at least in the overhead to double overhead zone, if not going bigger or even XL. The current NW swell will continue to ease through Friday and into the weekend, while slowly shifting more northerly. By Saturday, leftovers of NW-NNW swell (320-340° at 13-14 seconds) will still be strong enough to provide overhead surf at Pipe, with occasional double overhead waves in the morning. NOTE - This direction and period would favor Backdoor, although we should still see a few Pipe waves as swell. Strong ENE trades expected.

In the works right now is a large NNW swell (330-350°), product of a new low off Kamchatka merging with the old storm over the Aleutians. Although this complex system is making its way over to the Gulf of Alaska, the fetch aimed at Hawaii is projected to push southward and toward the Islands over the next 24hrs or so. Therefore, we're looking for a rapid build over Saturday night, peak on Sunday, then dropping off steadily early next week. Model guidance has been fairly consistent on the size, but recently shifted timing for the peak to Sunday morning through mid-day. Also, LOLA projections for the peak size of this swell is looking a little too hot right now; showing 12 feet+ at 14-16 seconds, when it's looking more around 9-10 feet at 14-16 seconds. Nonetheless, a swell of this magnitude would easily provide 12-18' faces at Pipe/Backdoor, with occasional larger sets, some of which break on 2nd reef up to 20' faces or so. Sets drop to double occasional triple overhead by Monday the 10th. Strong ENE trades expected through Sunday and early next week. NOTE - This angle/period will once again favor Backdoor or even Off-the-Wall. 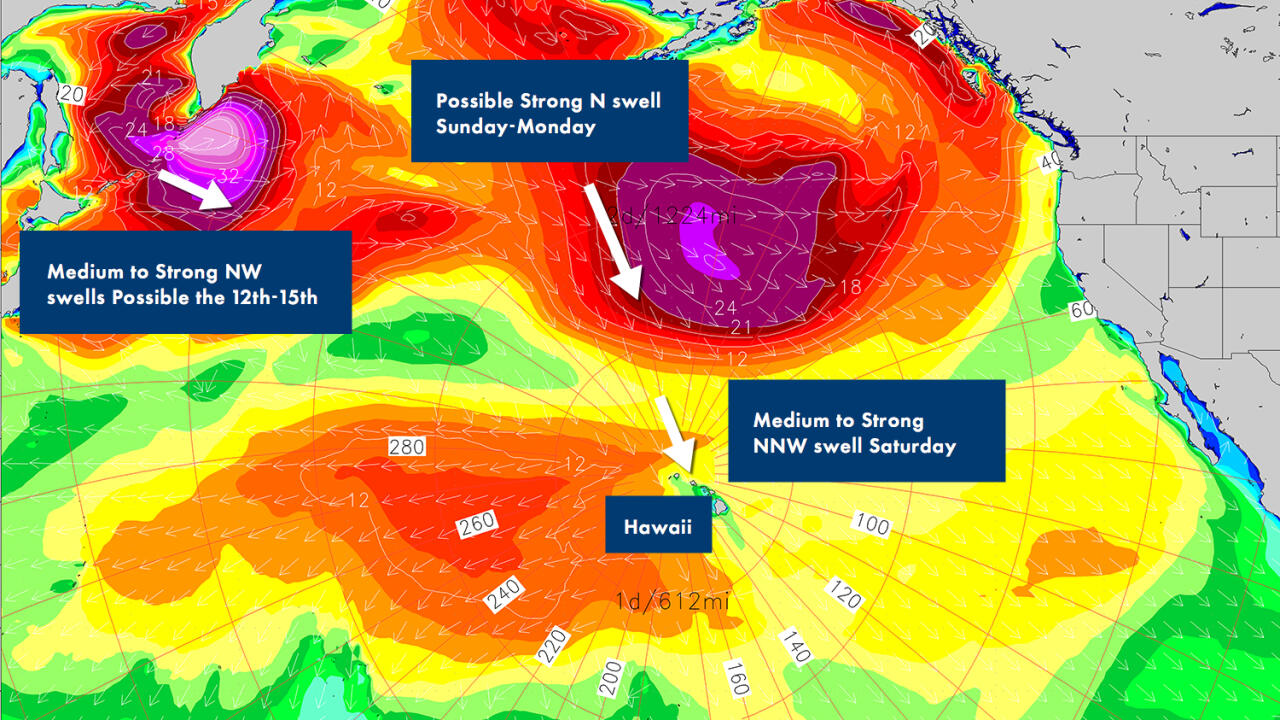 Going further out, confidence continues to slowly increase that we'll see a series of at least medium size pulses through the middle part of the month, 12th-17th+. Model guidance has been consistent with size/timing and size looks close to the December average (overhead to double overhead at Pipe). ENE Trades looking to persist and still rather strong.

We'll obviously need to refine details on all of the upcoming swells in the next 7-10 days, but the big take-away here is that the NPAC is alive and we have plenty of surf on the way.