Such was the case on opening day with two-to-three foot windswell coming into Shepard Park for opening day and local knowledge, along with some international spoilers, played a big factor.

Noah Schweizer and Robbie McCormick Leave Nothing To Chance The Florida Pro QS 1,500 winner Schweizer dominated opening day proceedings, alongside fellow Floridian Robbie McCormick, with an explosive start to accrue a 16.75 (out of a possible 20) heat total, the day's highest, in Round 2 Heat 10. The New Smyrna Beach native is able to come up each day from home and leave everything in the water -- something he's planning on doing each heat.

"You never know what someone else can or is going to do so you have to surf every heat the best you can," Schweizer said. "If you have an opportunity on a wave you definitely have to give it your all. That's the only way you progress at the sport. I'm 23 years old now so it's kind of make it or break it when you don't have a sponsor and that's why every heat I'm giving it everything I have to push myself." 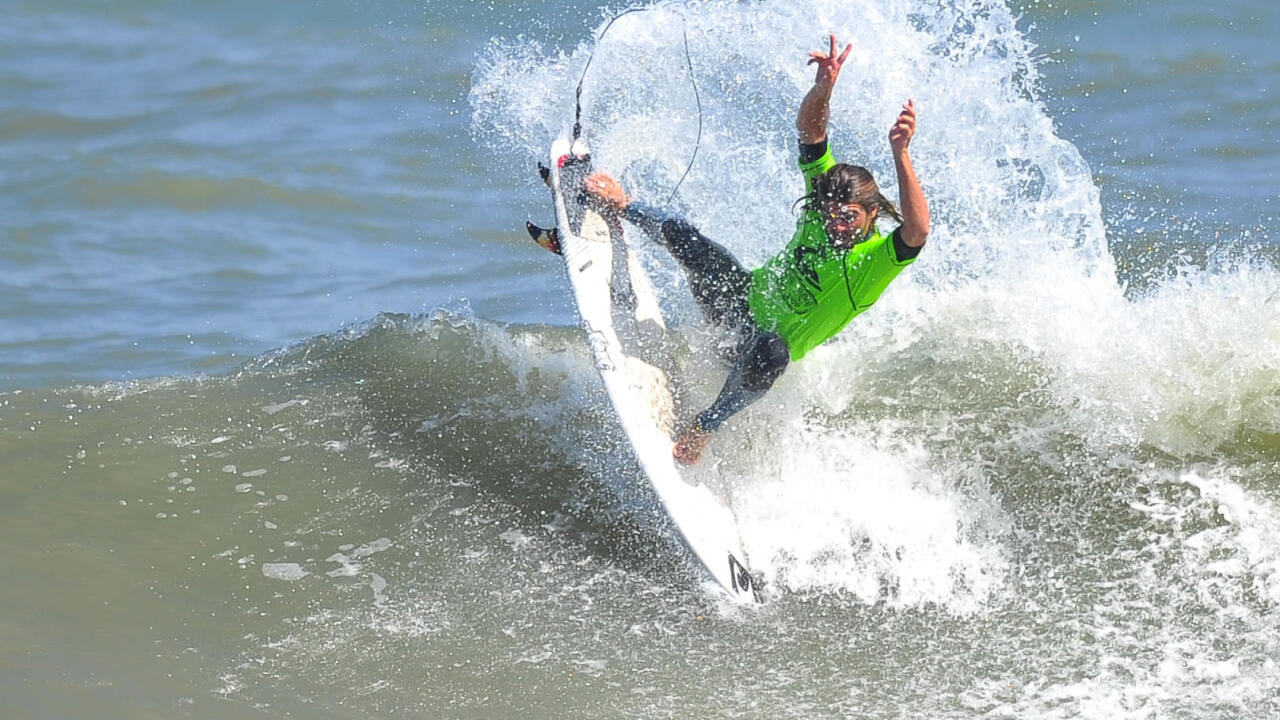 Forehand or backhand, McCormick had the lineup on lockdown today. - WSL / John Ferguson

Not to be outdone by Schweizer, McCormick threw caution to the wind just three heats later and blasted a high-risk, full rotation on his backhand to earn a near-perfect 9.00. One of the day's more anticipated heats included upcoming standouts Stevie Pittman, Micha Cantor, and Yuri Ogasawara but it was McCormick who took over with a 16.25 heat total. The 18-year-old had a great showing at this event last year and is showing he's capable once again.

"That felt really good and I'm just trying to freesurf through my heats while not really thinking about anything," McCormick said. "It's something I did last year here and it worked well for me so I'm kind of sticking to the same plan. I surf this every day and I love it, I love throwing everything into the turns. I just want to get as many points as I can by the halfway cutoff for rankings."

Internationals Play Spoilers Throughout the Day Matheus Navarro is back on the QS program and looking to make up for lost time. - WSL / John Ferguson

Brazil's Matheus Navarro led the charge in Round 1 with an impressive 14.10 heat total to start things off. The Balneario Camboriu, Santa Catarina, native showed incredible power and flow in the choppy conditions to earn an excellent, meaning an 8.00 (out of a possible 10) or higher, 8.50 and carried that momentum into Round 2. The 23-year-old battled with Jake Kelley for the lead, regaining it in the final minutes, and is looking to rebuild his career this season.

"This contest is very important to me after having to stay in Brazil the last two years to compete without a sponsor," Navarro said. "Now I'm back and I'm so happy to be here. This wave is similar to back home so it's fun and I'll try to build here for the next event in Huntington Beach as well. I watched a lot of the guys yesterday who are doing both events and almost wave I'm wondering ‘Who's this? Who's that?' (laughs) Everyone was ripping. But, this is a new start for my career." 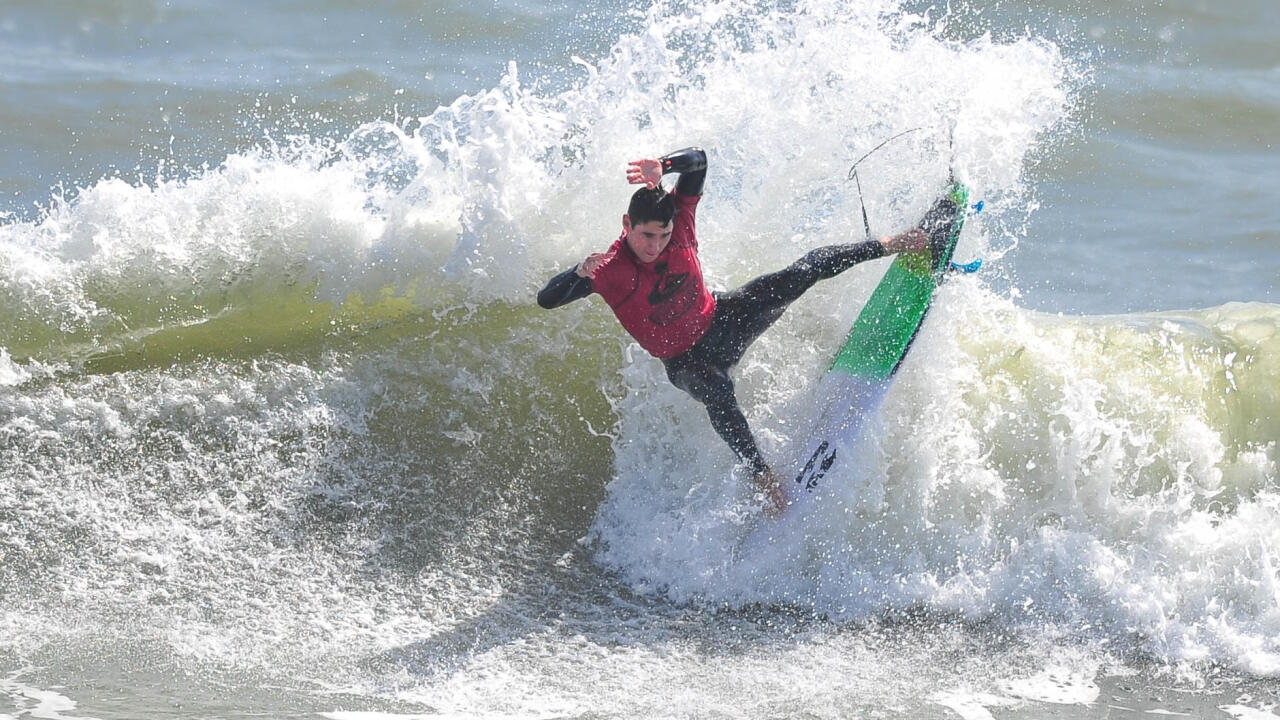 Ryland Rubens started his dream Pro Junior run here in 2017 and came out with an impressive win. - WSL / John Ferguson

Success is hard to come by in the QS even if you've claimed a Pro Junior Regional Title such as Ryland Rubens. The now 19-year-old had a tough, first full-time year among the ranks in 2018 and is already putting together a full season for this year -- smashing his Round 2 debut today. The former Junior Pro event winner garnered an impeccable 15.00 heat total and looks to start a foundation here at a place he claimed his first WSL win.

"Coming back here is always fun and I've done pretty well here the last few years so that makes it more enjoyable," Rubens said. "For how small it is, it's actually really fun. I'd like to get a good result here since it's been tough so far and it'd be nice to get something going to move forward. I've been on the other side of the world a couple of times already and everywhere is different. It's really cool to see the cultures as well as the different waves you're competing in, adaptability is the hardest part but it's a good challenge." Barton, like many of the competitors, remains in both events to pull double duty this weekend. - WSL / John Ferguson

Virginia Beach, Virginia's, Barton continues his transition from the Eastern Surf Association (ESA) level to a pro career and displayed once more that he's one to keep an eye on at just age 14. But, it's all fun for the young teenager as he seizes a full weekend of competition after advancing in both the QS and Junior events.

"This is East Coast, just fun waves like back home in Virginia Beach and I just saw where it was peaking," Barton said. "I was watching the other surfers, seeing what they're doing, and seeing where the waves were coming from to really get my board on rail. It's an amazing opportunity surfing against older guys that are trying to get to the Tour and also surf against friends that I know -- it's a great experience to come up with them."

Also winning their Round 1 heats, internationals kept pace from the QS event as Kanazawa, Brazilian Luan Hanada, and Basque Country's Markel Bizkarguenaga are into Round 2.

The Ron Jon Quiksilver Pro QS 1,500 and Junior Pro contingent prevailed over tough conditions and Quarterfinalists are in.