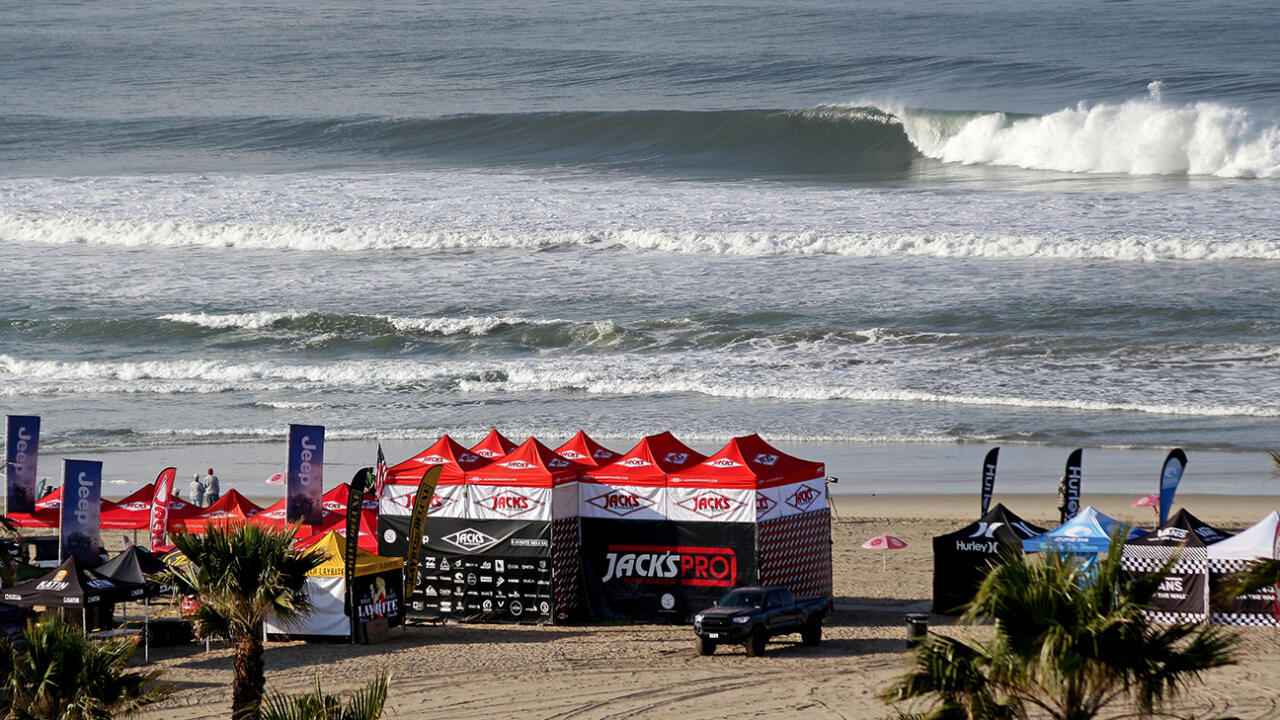 Those in attendance at Huntington Beach or who tuned in for finals day of the Jack's Surfboards Pro QS 1,500 were treated to a Championship Tour (CT) precursor with bombing conditions resembling some of the best righthand pointbreaks around the world. At the end of a marathon day to the podium, San Clemente, California's, Crosby Colapinto came away with a maiden QS win in his young career and kept the event title in his hometown after Kevin Schulz's victory last year.

The 17-year-old defeated an in-form Phillippe Chagas during a tight Final bout after laying waste to the lineup throughout the day.

Crosby Colapinto Goes The Distance
0:56
After displaying his ability to take down Pro Junior wins in pumping conditions at the Los Cabos Open of Surf last year, it was only fitting his first QS win be in the same form.

A quick start from Chagas garnered a 7.17 (out of a possible 10) but the first wave of meaning for Colapinto came just minutes later and executed two powerful maneuvers in critical sections for an 8.50. The Final slowed as both competitors maintained their strength for golden opportunities and Colapinto found his under the five-minute mark to all but seal the win with a 7.00 as Chagas final attempt fell far short of the requirement.

Colapinto smashed his way through a brilliant finals day run that included key victories beginning with a dominant win over one of the event's top standouts Kauli Vaast (who earned a perfect 10 in Round 4) in their Quarterfinal bout -- posting a near-perfect 9.60 and event best 18.27 (out of a possible 20) heat total along the way. The 17-year-old moved into a heavy Semifinal affair against former Championship Tour (CT) competitor Nathan Yeomans which he took over before the Final against Chagas. Colapinto now prepares for a trip back to Australia to watch his older brother Griffin compete among the world's best when the Quiksilver and Boost Mobile Gold Coast Pro kick off the 2019 CT season April 3.

Chagas: Hardwork Pays Off
2:22
The work ethic of Chagas is among the elite and it paid off with his career-best result.

The Brazilian made his presence known during the last day of competition with a standout Round 5 performance and carried that momentum all the way to the Final showdown. Chagas started his campaign in Round 1, showcasing his determination and hard work throughout a talented field of competitors that culminated in a career-best runner-up. The 22-year-old charged through Central Coast standouts Dimitri Poulos in the Quarterfinals and Braden Jones in a Semifinal battle.

The expectant father-to-be was beside himself as his goal of reaching the Final was met and everything nearly falling into place after spending a year and a half working away from competitions to find his way to a runner-up.

Notable and Quotable: Jones and Yeomans Put On A Show Yeomans crept through finals day until unleashing a big performance over Huntington's own, two-time Vans US Open winner and Championship Tour (CT) elite surfer, Kanoa Igarashi in Quarterfinal Heat 2. The 37-year-old's vicious backhand came through in the clutch with an 8.83 under the five-minute mark to turn the heat and Igarashi's last effort fell .07 short of the requirement. But his fellow San Clemente native overpowered the veteran with a big start that left Yeomans requiring an excellent 8.84.

"This has to be the best conditions we've ever had here for a contest and just a big shout out to Jack's for providing this opportunity for us, but especially the youth -- that's what it's all about," Yeomans said. "I felt like I was surfing really well today but I tweaked my back not even two weeks ago so I hadn't surfed for more than an hour until today. That heat with Kanoa I couldn't hear anything really, I just knew that wave felt good but I saw him get that wave at the end and thought he may have just got what he needs so that was cool to make it through. Crosby was just ripping today so I'm stoked for him." Central California was well represented on finals day and Jones led the charge with his first-ever Semifinal appearance after blistering through with a flawless record until falling to Chagas. The Pismo Beach competitor now prepares to head straight for the next QS event in Peru for a chance at bringing this momentum to South America following his swan song, 8.40 as time ran out in his Semifinal battle.

"I can't believe it, this is my first Semifinal of my life and I don't know what was happening," Jones said. "It was such a fun day and to make it this far on a day like this when we surf so much definitely helps my confidence. Hopefully I can take this steam into Peru and try to come away with some more heats."

Vaast's Perfection
0:26
When competitors, event staff and spectators alike said Huntington was all-time, Vaast made sure to put a stamp on it.

Paying Homage to WSL's Own: Kelly Marshall
2:10
Former WSL Tour Manager and wife to former WSL Head Judge Timmy Marshall, Kelly lost her battle with Stage 4 pancreatic cancer. We send all our love and condolences to the Marshall family.

The Pismo Beach, California competitor gave the home crowd something to cheer for as he stormed his way into the Quarterfinals.

The Pismo Beach, California, local looks to continue his form from earlier this month as he sits at No. 3 in North America.