If there were any doubts about Gabriel Medina's intentions in 2019, he's put his fellow competitors on notice today. In one of the strongest starts in his already storied career, his actions suggest he has back-to-back World Titles on his mind.

Facing Mateus Herdy in Round 3, Medina spent much of the heat fishing around the lineup and building scores. By heat's end he had locked into a blistering groove, sitting on a 9.33 and a near-perfect 9.80 for a heat total of 19.13, nearly three full points ahead of the next closest men's heat total.

"That heat felt good. I got two really nice ones," said Medina. "It was fun to be up against Mateus Herdy. He's a good guy. He's coming up and I'm probably going to see him on Tour one day."

Of course, one heat does not make a World Title.

But for Medina, who proved to be a lethal closer at the end of 2018, it was the kind of dominating performance that will allow him to build critical momentum. He won the Quiksilver Pro back in 2014, the same year he bagged his first World Title victory.

But the champ has also had his fair share of struggles over the years, tallying a string of 13th-place finishes. To start the season with a strong result will be a huge boost for him -- and extremely dangerous for everyone else on Tour.

"I usually start the year off slow, as everyone knows, but I'm just trying to step it up," Medina explained. "I showed up here focused. My goal is to do well in Australia."

For the explosive goofy-footer, the variable beachbreak conditions at D-Bah certainly play into his favor versus the long, right-hand point of Snapper. Groomed on the beachies of Brazil, Medina is always at his most dangerous when he can stalk the lineup and catch a lot of waves.

The more opportunities he has to showcase his creativity the better for his performance, because eventually he's going to land something big and the judges are going to love it. 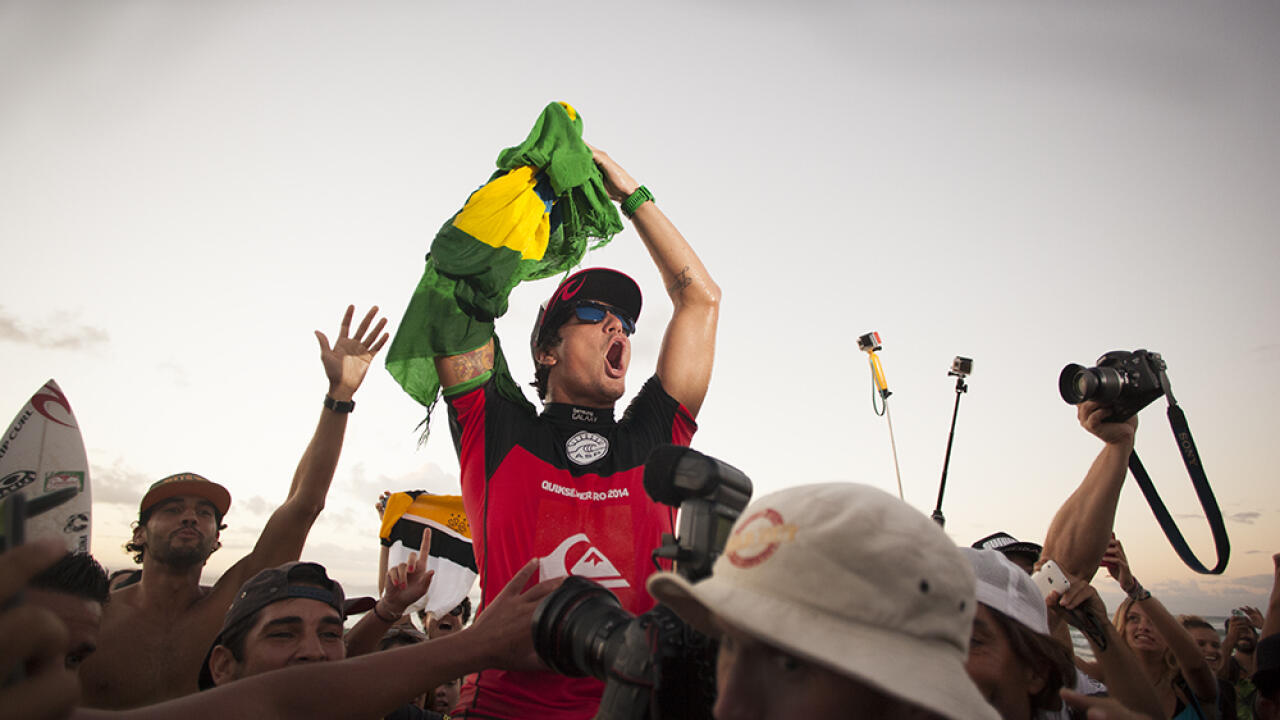 Medina celebrating his Gold Coast win in 2014. He went on to clinch his first World Title that same year. - WSL / Steve Sherman

He's also been taking notes on what's been working for his friends on Tour thus far. He's not just winning on talent alone, but he's becoming a student of the game. He's one of the very few surfers in the world that can see what somebody like Italo Ferreira or Filipe Toledo is doing and actually step it up to the next level.

When it comes to his strategy at D-Bah and his overall strategy for the year, it appears to be: simply go bigger than everyone.

"Everyone surfing in the Airborne event yesterday did so good. I love watching that type of surfing," Medina said. "It pushes the boundaries of the sport."

During the off-season Medina's profile reached new heights as he ascended to the role of international sports star. Traveling the world, hanging with some of the most famous footballers and celebrities, it would have been incredibly easy for him to get distracted, but after his statement-making Round 3 heat, he appears completely locked in.

Coming off of a World Title is never easy. Title campaigns take an inordinate amount of focus, discipline and sacrifice. On the men's side, only Tom Curren, Kelly Slater, Andy Irons and John John Florence have ever been able to pull off back-to-back title victories. If Medina can go the distance this year, that will put him in some heady company.

"I just have to stay in the zone really," said Medina. "I put my music on and pray in the morning. It keeps me calm and confident."

It might be his time for his fellow competitors to start praying if this is the kind of season Medina's going to have.

Notable and Quotable from Day 3:

-John John Florence made the first definitive statement about his intentions for the season, "I want to win another World Title so bad." See the full interview here: John Florence Post Heat Interview.

-Reef Heazlewood has been on a heater. He won the event trials for a Wild Card into the event, placed second in the Airborne, and went on to knock out the defending event champ Julian Wilson and current World Number 2 in Round 3, Heat 5. I've looked up to Julian for ages," said Heazlewood. "To take him down is pretty massive for me. Since I lost my sponsor I've just been goin up and up. I've got a lot of confidence." Watch the full heat replay.

-Friends, contemporaries, competitors; Seth Moniz and Griffin Colapinto face off in their inaugural CT head-to-head matchup in Round 3, Heat 6.

-Surfing as an Injury Replacement, former CT competitor Sage Erickson gave a gutsy performance and emotional post heat interview after defeating the other defending event champ Lakey Peterson, the other current World Number 2, in the other Round 3, Heat 5. Must be something in the water ... Watch the full heat replay.