Highlights: Airs and rail game on display in Caparica
1:58
The Caparica Surf Fest powered by Oakley continues in great waves and sees surfers post massive scores in all divisions.

The Caparica Surf Fest continued in improved conditions today and ran through another massive day of competition with all four divisions, QS and Junior, men and women taking turns in the Caparica lineups.

Waves pumped all day, with light winds in the morning and the bright Portuguese sun shining all day. Around the high tide mark, waves jumped in size again and offered beautiful conditions, especially on the South podium where the juniors found themselves a pulsing righthand point type of peak to post massive scores in Round 3.

Power Surfing and Airs Score Best in Men's Round 3

In the men's QS3,000, former Championship Tour surfer Mitch Crews debuted in Caparica this morning and fought back an early shocker of a heat with a three-turn combo to post an excellent 8.50 and kickstart his assault for the lead. The Australian surfed the wave brilliantly with three very different turns, showing the full array of his skills on the rail. He later posted a second good score to seal the deal on a Round 4 berth.

"I've been having a bunch of amazing free surfs," he said. "But 20 minutes flies out there and with the pressure of a heat, it can sometimes get the better of me. I managed to turn that one around and I'm just happy I finally got to surf a good wave well cause it's pumping out there."

Two heats later Renan Peres took a different road, and one above the lip, to score a 14.33 total and advance. The Brazilian launched into a couple of big forehand rotations to punctuate his rides and left no choice to his opponents but to fight for second place. 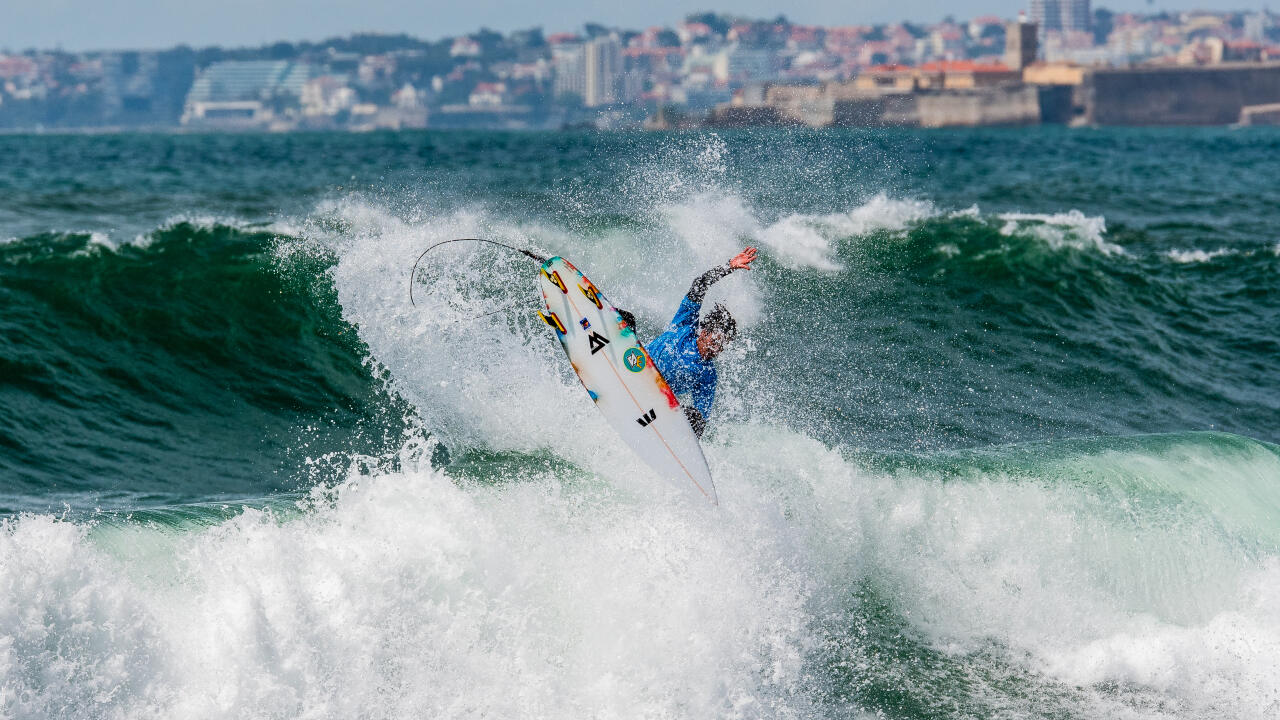 "Waves were on fire in the heats prior to mine but the wind sort of came up onshore during ours," he said. "I was a bit disappointed but at the same time that wind was perfect for airs so I just went for it. I landed a couple so I'm stoked to make the heat and excited about the next ones."

Thomas Debierre continued to impress and took yet another heat win with solid scores, Tristan Guilbaud and Nolan Rapoza advanced in dominant fashion as well and junior Daniel Templar upset Portuguese surfer Tomas Fernandes in Heat 7 to make the Round 4. 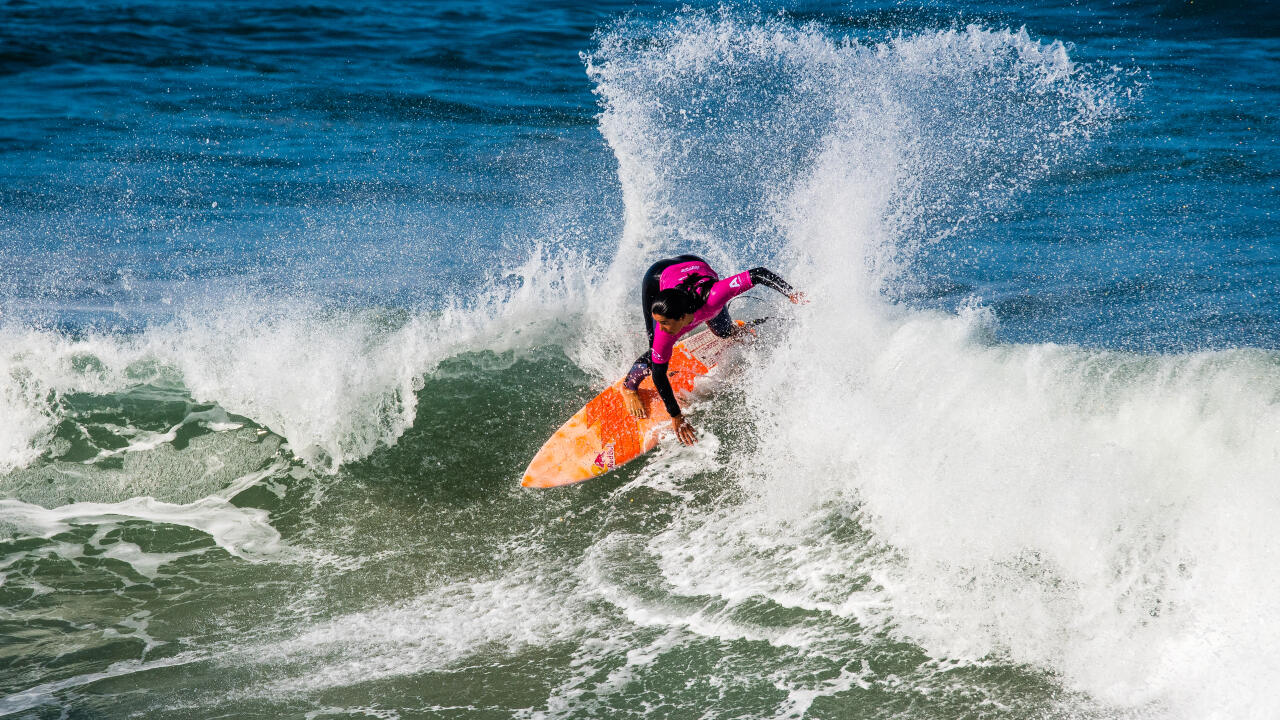 Teresa Bonvalot has been leading the charge, trying to get a Portuguese woman on the Championship Tour for a few years. With already three appearances as a wildcard on home soil and a ton of good results both internationally and in her region, the stylish goofy foot continues to build her profile as one of the best surfers in the world.

She finished her 2018 season ranked 17th on the Qualifying Series and has already banked a good result in Australia earlier this season. She launched her campaign in the women's QS1,000 in the very first heat of the round and dominated with her backhand attack on the rights to advance into Round 3.

"It felt great to catch a good one right at the beginning," she said. "There are some good rights and a few fun lefts but unfortunately I couldn't find those lefts, I'm just stoked to make it through. It's awesome to compete at home with family and friends around, there aren't a lot of QS events around here so when I get a chance I always take it."

She was quickly followed by another consistent threat on the QS, Carol Henrique who took the win in Heat 3 and advanced alongside Yolanda Hopkins. But it was youngster Mafalda Lopes who perhaps made the biggest impression by taking the win in Heat 5 ahead of long time CT athlete Pauline Ado. 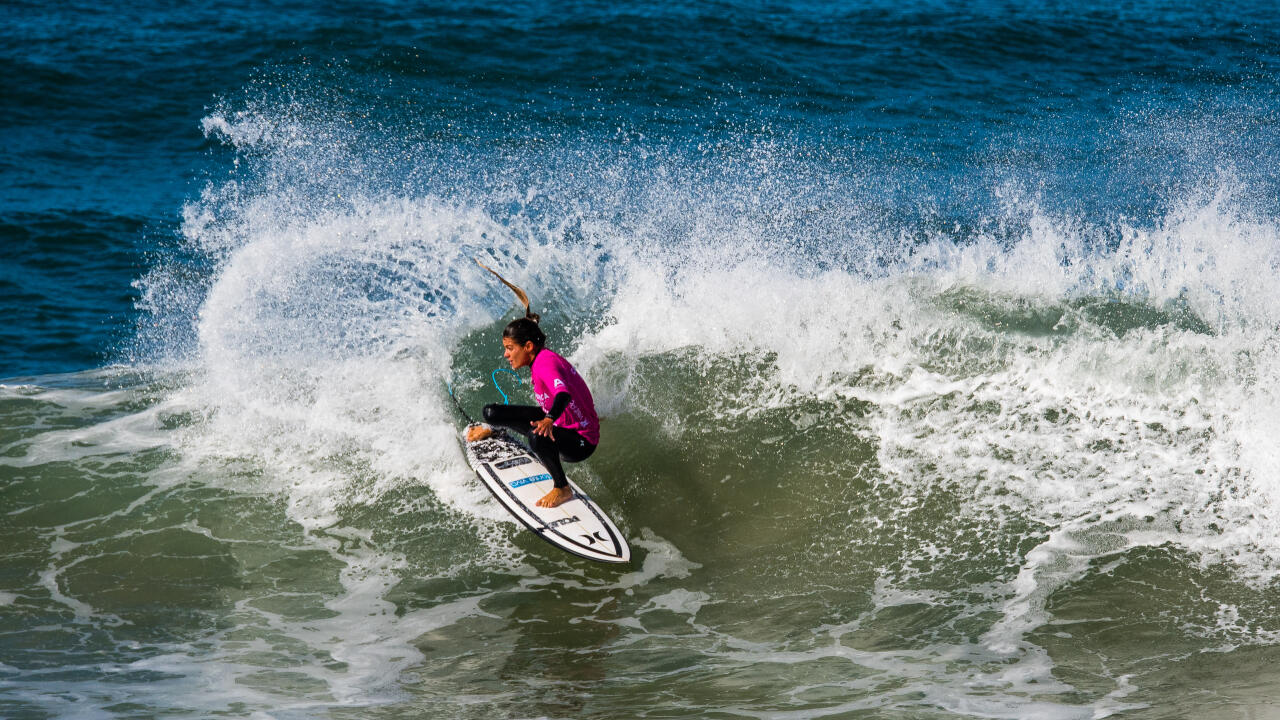 Lopes already made waves last year as a junior in Caparica when she landed a forehand rotation for an 8.83 and shocked the field. She went on her forehand again today on a great looking left to find the winning ride and advance ahead of Ado.

"I'm really happy with my heat," Lopes said. "It's really good to compete at home because we know the wave well and surf it everyday. I was a bit stressed out to be surfing against Pauline (Ado) but I tried not to let it affect me. Caparica is an awesome place to call home, we have good waves all the time and people are super nice."

The Caparica Surf Fest Junior Pro powered by Oakley men's Round 3 saw a flurry of incredible scores posted all day as the under-18 athletes were clearly on the better peak of the day in Caparica. It started with Lenni Jensen's 8.00 point ride and escalated quickly in the following heat with Brazil's Fernando Junior who claimed a near-perfect 9.17 in his heat and backed it up with a 8.33 a massive total.

Téva Bouchgua, Justin Becret, Youri Conradi, Thibault Manson, Iker Amatriain, Edoardo Papa and Kade Matson all posted big numbers in Round 3 and will be powers to be reckoned with when the event resumes.

Unfortunately a strong onshore wind came to spoil the party mid-afternoon and the scores were affected a bit in the remainder of the round. Or so we thought; in the very last heat of the round, the recent finalist in Espinho Afonso Antunes nailed the day's performance with two high 8s for a 17.60 total.

"I think I'm just riding on that momentum from two days ago," Antunes said. "Espinho was so much fun, the waves were absolutely firing and I'm hoping we can get similar conditions at the end of the week here. Last year I had a terrible season and I sort of forgot why I do this, and I wasn't even enjoying surfing. I took the rest of the year off and now I'm back and I really enjoy just being out there, and of course when you win you appreciate it more too."

Antunes who claimed a perfect 10 point ride last week for a deep and lengthy barrel, this time posted 8.70 on turns and an 8.90 for a forehand rotation, proving his game is complete and his current mojo shouldn't be lost anytime soon.

The junior women's opening round then concluded the action for the day on the South podium. Recent winner in Espinho Rachel Presti took out the day's best total closely followed by Spain's Maria De La Pena and Ana Betancor.

Event officials have convened surfers to a 9:30 a.m call on Wednesday for a potential third straight day of action in expected difficult conditions. The women's QS division has been called OFF for Wednesday.