Seventeen-year-old Caroline Marks, the youngest surfer on the Championship Tour, not only won the first event of the season at the Boost Mobile Pro Gold Coast -- but she continued her roll with a Semifinal finish at the Rip Curl Pro Bells Beach, tightening her grasp on the Jeep Leader jersey heading into the Corona Bali Protected.

Despite it being just her second year on Tour, Marks is unfazed by her current No.1 ranking. During a recent visit to the WSL headquarters in Santa Monica, the Floridian didn't shy away from the fact that her goal is a World Title.

The World Surf League: You Made it to the Quarterfinals last year. What are some of your expectations heading into Bali?
Caroline Marks: I'm just expecting to have fun and surf well, those are the two things I really want to do. No pressure but I for sure want to win. That's my goal.

Having won your first event, has your goals changed at all for the year?
Definitely. My goal at the beginning of the year was to win an event and show what I've got. Now that I've done that, a World Title is on my mind. Mainly because I want to prove to my brothers that I can do it [laughing].

When was the first time you surfed Keramas?
I actually went there a couple of years ago for the Grom Games trip with Surfer magazine and I surfed Keramas a couple of times. Super fun wave, it's one of my favorite waves on Tour. Hopefully we get a decent swell. The forecast looks pretty good for the first few days of the waiting period.

Is it harder to surf it as a goofyfoot?
Well I don't know the difference but I actually really like it backside. It's super cuppy. Italo Ferreira won last year and he's a goofyfoot. I don't think it's an advantage or a disadvantage. All I know is that it's a super fun wave. Last year was pumping and it was sick backside so I'm really excited. Marks advancing to the Quarters at the 2018 Corona Bali Protected. - WSL / Kelly Cestari

You still have the Jeep Leader jersey. How are your nerves?
I don't really feel that nervous right now, maybe I'll get more nervous before the event. I'm just super excited to surf really well at Keramas and go to Bali with my brother. There's always nerves but there aren't extra nerves. I want to have fun. But I really want to keep the yellow jersey, that's my goal.

Is your whole family going with you to Bali?
No, I'm just going to go with my older brother and I think my dad's coming to Margaret River.

You're leaving tonight. What kind of boards are you bringing?
Bali and Margs are hard because in Bali you need a lot of shortboards and Margaret River you need a lot of bigger boards. So I have boards getting shipped to WA (Western Australia) for me already. Then for Bali I brought tons of shortboards, I brought 13 boards. I'm going to have my brother bring home some short boards for me because I don't need that many for Margarets. Most likely we're going to need step ups there. I feel pretty covered.

Your brother punched a hole in the board you won your first event on?
[Laughs] Yeah so before Snapper I had a brand new board and I had never ridden it before and I was fighting with my brother because I didn't bring him to his friends house. Then he texted me saying, "Your new boards look so good." So naturally I said, "If you touch them, I'm going to kill you." I didn't think he would actually damage my board because he knows that's the worst thing he could do to me. I'd rather have you smash my phone in half, but touching my boards, anything with my surfing, drives me crazy. And I left to Australia two days after this. So I came home and was about to ride that board the next morning and I saw that the front of it was smashed in. He said he couldn't punch a hole in it so he took a hammer to the back of it. I was so baffled.

Anyway I got it fixed but there were still punch marks in the front of it that you can't do anything about. It looks like I did an air and landed super hard. The back I got fixed which is nice because there was a hole. Long story short I rode the board and won the first event of the year on it. The first heat I had in my yellow jersey I surfed that board too, so I'm undefeated on it.

Are you going to bring that board to Bali?
Oh, for sure I'm going to bring it to Bali. I remember I told him, "I hope I win a contest with this board just so I can tell everyone what he did." I just want to tell the world, "Yeah, my brother punched this board and I won the contest on it." And that's exactly what happened. So now he makes the joke, "Maybe I should punch all of your boards now." He definitely shouldn't but it worked out great. 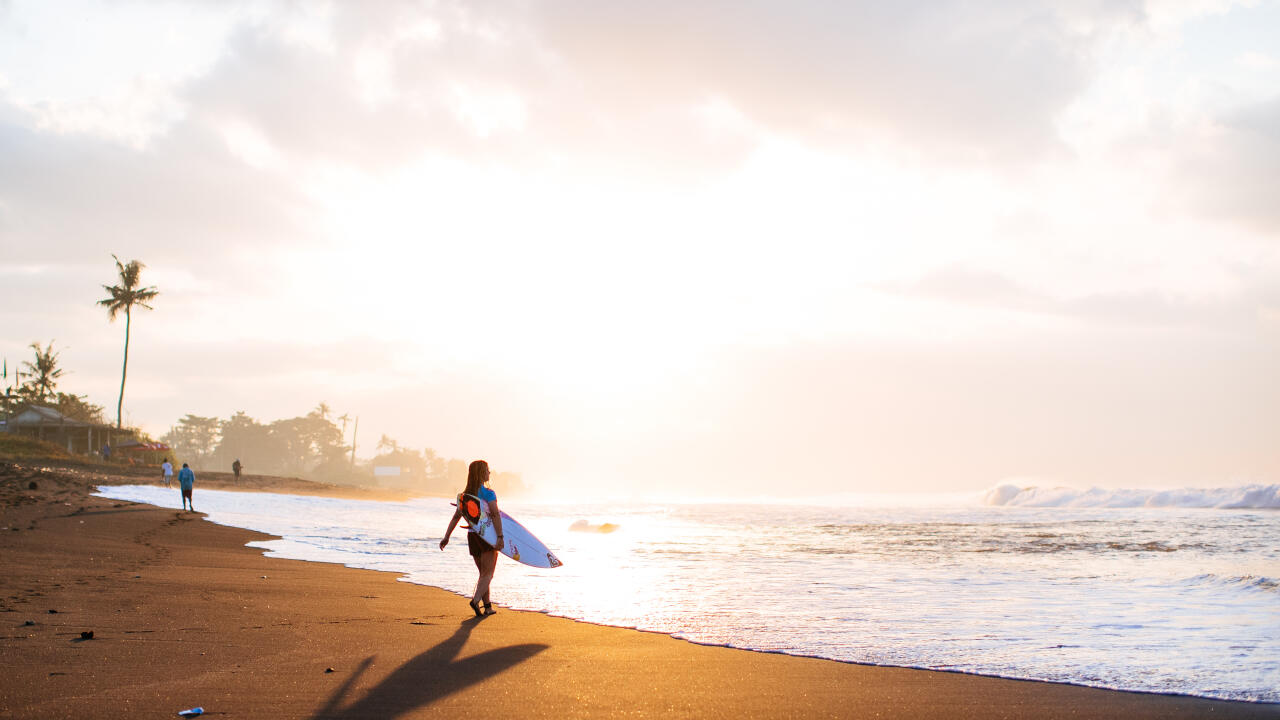 Anyone in particular you're excited to watch at Keramas?
The air guys are going to be super exciting to watch. It's such a good air wave. Italo Ferreira last year was doing huge airs, I think John John Florence is going to be super gnarly, Gabriel Medina, Kolohe Andino, Julian Wilson, Filipe Toledo...all of those guys, the list goes on. It's such a high performance wave with a huge air section.

Do you have any predictions for the women's 2019 season?
All I know is I want to win.

Watch the Corona Bali Protected live May 13-25 on Worldsurleague.com, App and Facebook.