The World Surf League (WSL) Qualifying Series (QS) leg of events in Chile continues this week at the heavy reefbreak known as El Gringo for the 10th edition of the Maui and Sons Arica Pro Tour. Solid sets in the 6-foot range (2 meters) provided gaping barrels and some severe wipeouts on the first day of competition at the QS 3000. 18-year old Nick Marshall (USA) caught the best waves of the day, getting two deep barrels for an 8.50 and a 7.17, earning the highest heat total of 15.67 points. "I love this barrel, it's the first time I've ever been here, but it's a perfect wave," Marshall said. "I've never surfed a contest like this before, so I'm stoked. It's kind of a hard wave, but I feel like I'm starting to figure it out and pick the right ones. Hopefully I can keep doing that and keep advancing. Doesn't seem like they're really scoring turns, so it's barrel or nothing out there. You've just got to knife it under the lip and hope you come out."

Marshall showed the go-for-it attitude necessary at such a heavy break like El Gringo. Despite mainly being a lefthander, today's swell direction provided some powerfully hollow rights as well, which Marshall took advantage of. Advancing in 2nd place was the Peruvian veteran Gabriel Villaran (PER), eliminating Roberto Araki (CHL) and João Chianca (BRA), who just claimed his maiden victory at the QS 3000 in Iquique last week. 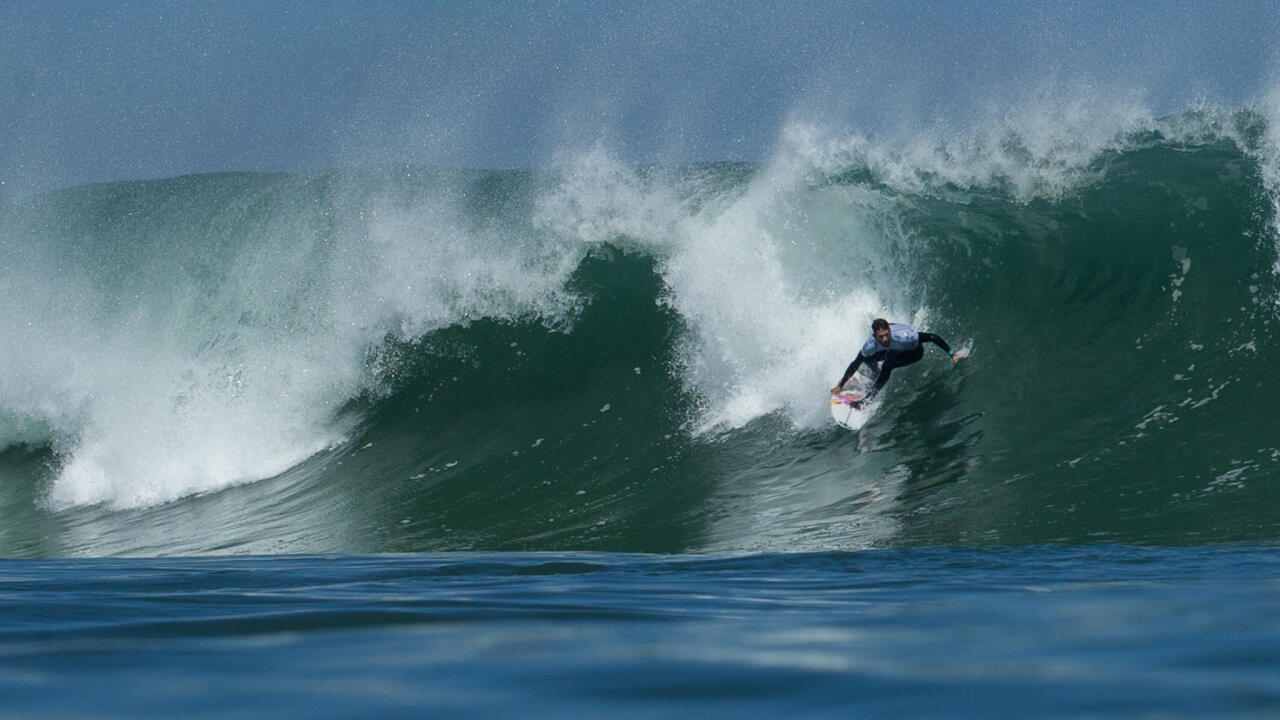 El Gringo giveth and taketh. While you might catch the ride of your life in Arica, the powerful waves, shallow reef and rocky coastline can cause serious injuries as well. In the first heat of the day, Maxime dos Anjos (FRA) got thrown along the rocks and had to be taken straight to the hospital. After receiving medical treatment, dos Anjos is recuperating well with lacerations to his lips.

After taking out the Pro Junior event in Iquique, 14-year old Leo Casal (BRA) has maintained his form in Arica by winning his first heat at the QS 3000. "Yesterday was the first time I ever surfed out here and it was kind of stormy with onshore winds," Casal said. "This place is a little scary, especially after seeing someone leaving in an ambulance in the first heat. It's really shallow here and breaks so close to the rocks that you can't be hesitant. I'm so young that it's hard to compete against people that surf this wave so well, but I'm not backing down and want to do my best here."

As the day continued, conditions began to deteriorate with fewer barrels and lower scores. One of the few Chileans to take first place in their heat was Camilo Hernandez (CHL) who won with a 4.67 total, but was pleased to be competing in Arica after a 3-year hiatus. He is now set to face Alvaro Malpartida (PER), Joaquin Del Castillo (PER) and Duke Nagtzaam (AUS) in Heat 15 of Round 2. "That was a super hard heat because there weren't many waves, but a lot of wipe-outs," Hernandez lamented. "At least I caught that one barrel to win the heat. It's a shame there weren't more waves out there, but I'm stoked to advance after so much time away from competing in Arica."