Kugenuma Beach didn't deliver ideal conditions to start the Murasaki Shonan Open supported by Nissan Caravan NV350 after Monday's lay day but competitors still found a way to make fireworks happen in the clean, two-foot surf. With 1,500 points on the line, a heat win is a heat win no matter how it's done and some dynamic surfing led the way amid low-scoring affairs.

The eighth edition of this event continues to provide a platform for local and regional talent to garner important points toward building a professional surfing career -- something all the surfers in attendance attested to on opening day. A slow start for I Nyoman Artana in Round 2 Heat 4 looked to be troublesome until the Indonesian began building his scoreline before finding a gem to post a 7.00 in the closing minutes to minutes the lead. The goofyfooter's ability to scour the lineup paid off and launched an air-reverse into the flats for his first heat win of 2019. Artana continues to find his way into the QS rankings with a few more events under his belt each year and is already a familiar face around this event - and country in 2019.

"This opportunity to surf a QS 1,500 is great for points to get to the next step of the QS for bigger events in the future," Artana said. "It's slow and you didn't know what wave was good so you had to stay busy. This is the fourth time I've come here to Japan this year. This time of year is very cold for me comparing Bali (laughs), but the waves are good enough so I like it." Noa Ishii making the most of an overall tough day. - WSL / Yu Nishiguchi

Kugenuma's own Noa Ishii began Round 2 with a momentum-building win by eliminating one of Round 1's victors and experienced QS competitor Takumi Nakamura. Ishii's ability to find scores amid the increasingly difficult waves proved to be no issue for the hometown competitor as he looks to claim a big result on his turf.

"This is my home ground so I want to surf really well and get far in this event," Ishii said. "I'm hungry for each heat surfing here every day and wanting to show my best surfing as well. The goal is to get into the higher-rated events but it won't be easy with every surfing at a high level at these events. I hope I can surf even better in the next round."

A Dynamic Start for Shotaro Wake Shotaro Wake showcasing his ability to rise to the occasion. - WSL / Yu Nishiguchi

Shotaro Wake displayed his backhand attack in great form to earn a 7.00 (out of a possible 10) on his first attempt to set the tone for his heat. The Chiba native continues to push his career forward in hopes of joining the QS elite around the world after making his debut in last year's Murasaki Shonan Open. Wake has a lot of work ahead of him, but a dynamic start put the field on notice of his talents.

"This is an important opportunity, I'll still surf domestic events but to surf the QS is as important as it gets," Wake said. "I can surf against a higher level of competitors and it's harder to get good scores at this level. It makes me get to that next level in both my skill and mindset. I'd like to keep building points and start surfing international events." 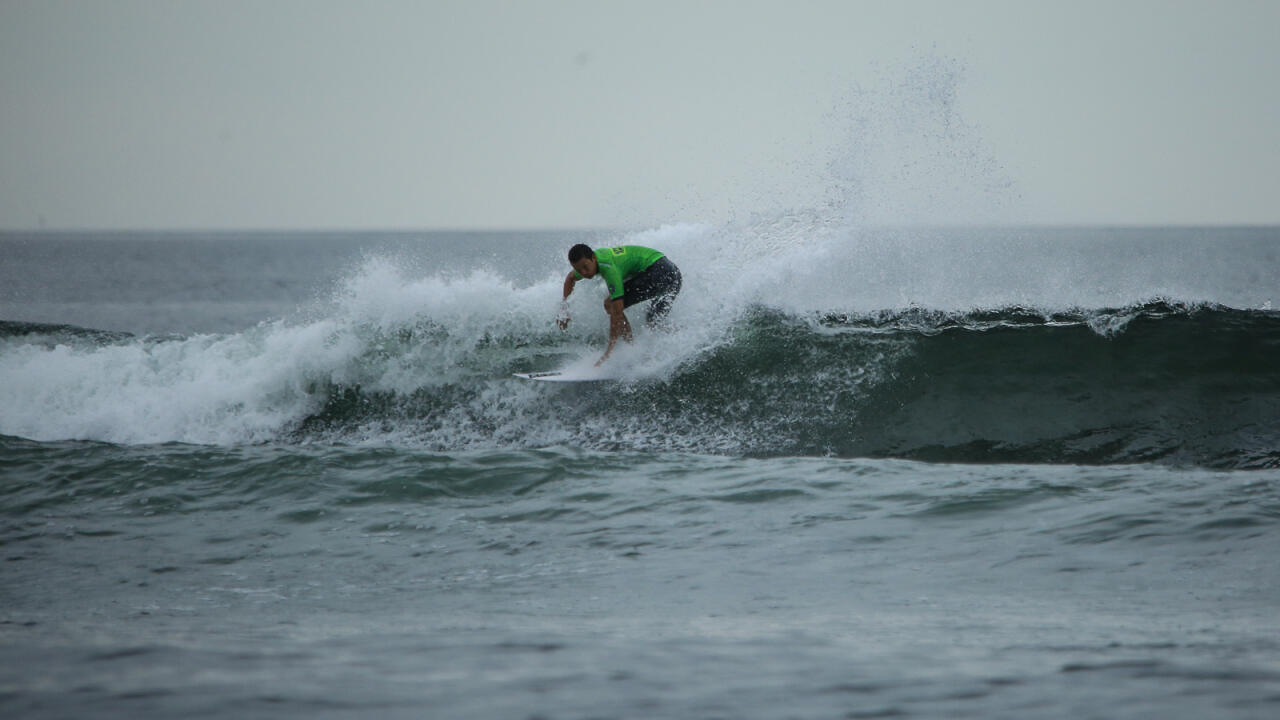 Kai Matsumoto decimated the lineup with his backhand attack to win his Round 2 heat. - WSL / Yu Nishiguchi

One of Hawaii's own Kai Matsumoto solidified a victory in the following heat over higher-seeded surfers Naoto Takanashi, also advancing, and Keito Matsuoka. Matsumoto is on the same path as many of the QS competitors in attendance with one goal in mind -- build points and give himself a chance at entering bigger events to chase his dream of Championship Tour (CT) qualification. The Hawaii native is a second-generation competitor in Japan and showing he's ready for more after winning both his Round 1 and Round 2 heats.

"This event is important for Japanese culture and the upcoming Tokyo Olympics," Matsumoto said." I'm not qualified for the Olympics but it's easy to see how big of a part of the culture it is. Coming back to Japan and surfing competition is fun and my dad use to surf Japan so to follow his life style is really cool too."

Event organizers will reconvene at 6:00am JST to determine the next call for competition.