Every day nears closer to the start of the Vans US Open of Surfing presented by Swatch and its arena awaits a plethora from some of the world's best surfers. Joining them once more will be the men and women Pro Juniors for an early entry into the madness of what professional surfing can embody in places like Huntington Beach, California, beginning July 27 - August 4.

The Vans US Open presents an opportunity to shed light on that next generation of competitors and get a glimpse of what the future holds from the nation's top competitors 18-and-under (the surfer can compete in the Pro Junior series until the year of their 18th birthday). San Clemente, California's, Kade Matson comes into Huntington Beach as the current No. 1 for North America after his first-ever WSL victory in Florida earlier this year along with newcomer No. 1 Caitlin Simmers. The 17-year-old Matson is currently recovering from a torn ligament in his foot but he looks to be ready for an appearance in the QS 10,000 trials heat to capitalize on a big opportunity. The Hawaii contingent have claimed back-to-back wins at the US Open and the mainland competitors haven't claimed the title since Griffin Colapinto win in 2015.

"This is probably one of my favorite events of the year just being so close to home and I feel really comfortable in Huntington Beach," Matson said. "Confidence is everything there because it's a tricky wave and you have to have some knowledge on where to be in the lineup, and know how to approach it. Tearing ligaments in my foot made me realize I want to be at 100 percent at all times after being out for a month and a half and it's been a painful process. But, it's been important to remain positive knowing I have a long career ahead of me and this is only a month out of my life so I've got a good perspective."

Plenty of contenders join Matson in hunt for this year's title from both the region and around the world once more. Here's just a few to keep tabs on the men's side:

The reigning men's WSL Junior Champion comes into Huntington Beach mainly for the QS 10,000 but also has his eyes set on as much time in the water as he can to prepare. Herdy's resume speaks for itself with explosive airs at the WSL Airborne on the Gold Coast and ability to lay his power into the rail but it's his approach that's kept him hungry.

The 18-year-old's humbleness out of the water shows his maturity while still being able to enjoy his time in the spotlight as another of Brasil's WSL Champions in preparation for what is looking to be a prolific career. Herdy is joined by fellow internationals such as Japan's Joh Azuchi, France's Justin Becret and others. 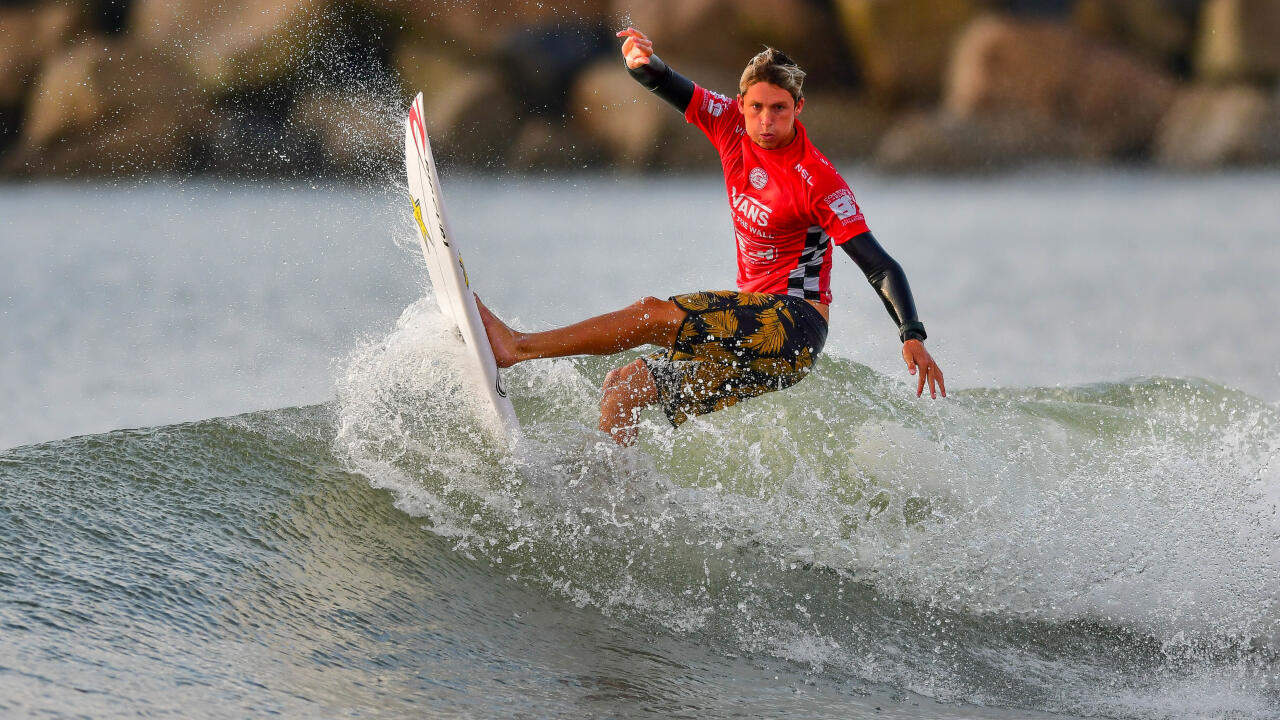 Colapinto's approach to small waves is never one to leave out when conditions get tough. - WSL / John Ferguson

Though Colapinto was dealt a shocking result at last year's US Open, the now 18-year-old comes in fired up for a shot at redemption. One of Matson's fellow San Clemente breakout talents, Colapinto has made his presence known around the world from J-Bay perfection to Sunset Beach's heavy walls and shows no signs of slowing down.

He now looks to find himself a big result in the Pro Juniors, where his sole focus will be set, and push into an early qualification spot for the World Junior Championships later this season. But, he will have to deal with the likes Alan Cleland, another San Clemente threat Jett Schilling, and many more from North America.

The women also have a title to regain since now two-year Championship Tour (CT) elite Caroline Marks' last victory in 2016 marked North America's latest victory after a back-to-back Hawaii sweep. But, all of the nation's top juniors such as Kirra Pinkerton, Alyssa Spencer, and Samantha Sibley are back in attendance with their eyes set on both the QS 10,000 and Pro Junior titles.

One of the clips that had the Internet in a frenzy featured Simmers' showcase of both a frontside and backside air-reverse at the BSR Cable Park in Waco, Texas. The 13-year-old took down her first WSL victory in Florida this season and looks to extend her lead with another big result, this time being her first outing at the Vans US Open.

Could her air-game prove the difference maker? Here are this year's international notables looking to keep her grounded. Kelly's bringing an air-game all her own to Huntington Beach. - WSL / Damien Poullenot

The 15-year-old Australian comes into California ranked No. 3 on the QS rankings, adding to the list of young talents who occupy multiple qualifying spots currently, and looks to claim a US Open title of her own. Ask any competitor, particularly those traveling abroad, and you'll hear similar responses -- the more time spent in the water, the better.

Such is the case for Kelly as she prepares to keep the elusive US Open title away from North Americans once more and add one for the Aussies. Tomoda-Bannert's bottom turn is just the surface of where her potential lies. - WSL / Tim Hain

The WSL Junior Championship runner-up already has one Pro Junior win to her name in 2019 and looks to keep the Hawaii dream alive for a third-consecutive year. Tomoda-Bannert's ability to negotiate smaller conditions makes her lethal in competitions while her prowess in waves of consequence showcases her true talent.

Though she will be relying mostly on her small-wave arsenal with quick, powerful maneuvers if Huntington Beach does decide to turn on during the week Tomoda-Bannert is more than equipped to deliver.