The drought is over for mainland North America's Vans US Open of Surfing Men's and Women's Pro Junior title after the men's trophy hasn't seen home soil since 2015 and the women's since 2016. In a flurry of finals day action, Kade Matson and Caitlin Simmers emerged victorious in their respective divisions, adding back-to-back wins on the 2019 regional ranks after both took down the Ron Jon Quiksilver Junior Pro to start the year.

Huntington Beach kicked it up a notch as three-to-five foot swell began to truly show itself and the Pro Juniors, as well as the Men's and Women's Vans Joel Tudor Duct Tape Invitational, put on an incredible showcase of power. This marks the California's duo's second-straight regional win of 2019 after claiming the Ron Jon Quiksilver Junior Pro earlier this year. The San Clemente native had his full support system behind him, cheering every heavy turn Matson laid down in the Final over a stacked field that included good friend Jett Schilling, Australian talent Caleb Tancred, and Japanese breakout competitor Joh Azuchi. The 16-year-old put his devastating backhand to work right away to move himself into second after a quick start from Azuchi, but inconsistent conditions had the North America No. 1 eyeing the horizon for nearly ten more minutes before an opportunity arose and one he wouldn't let go to waste -- earning a 6.17 to separate himself from the pack.

Matson rode a victory lap into the shorebreak where current World No. 1 Kolohe Andino was there with the San Clemente crew waiting to embrace him. This win pushes the emerging talent nearly 1,000 points ahead of No. 2, Schilling, and in an excellent spot to qualify for this year's WSL World Junior Championships. Australia's Caleb Tancred put on one hell of a show. - WSL / Jenny Herron

Matson's win ended a drought of international success at the Vans US Open Pro Junior event, last won by Griffin Colapinto in 2015, but the Australian and Japanese contenders nearly made their move count with Tancred's last wave coming just shy of the requirement he needed.

However, despite a disappointing fourth-place finish, Schilling's performance moved him into the No. 2 spot and furthered his chances of making it to the esteemed WJC event at year's end. The 16-year-old has plenty to look forward to, including the upcoming RVCA Pro Junior for a chance at notching a third Finals appearance in 2019 and aim his sights on a maiden WSL victory. 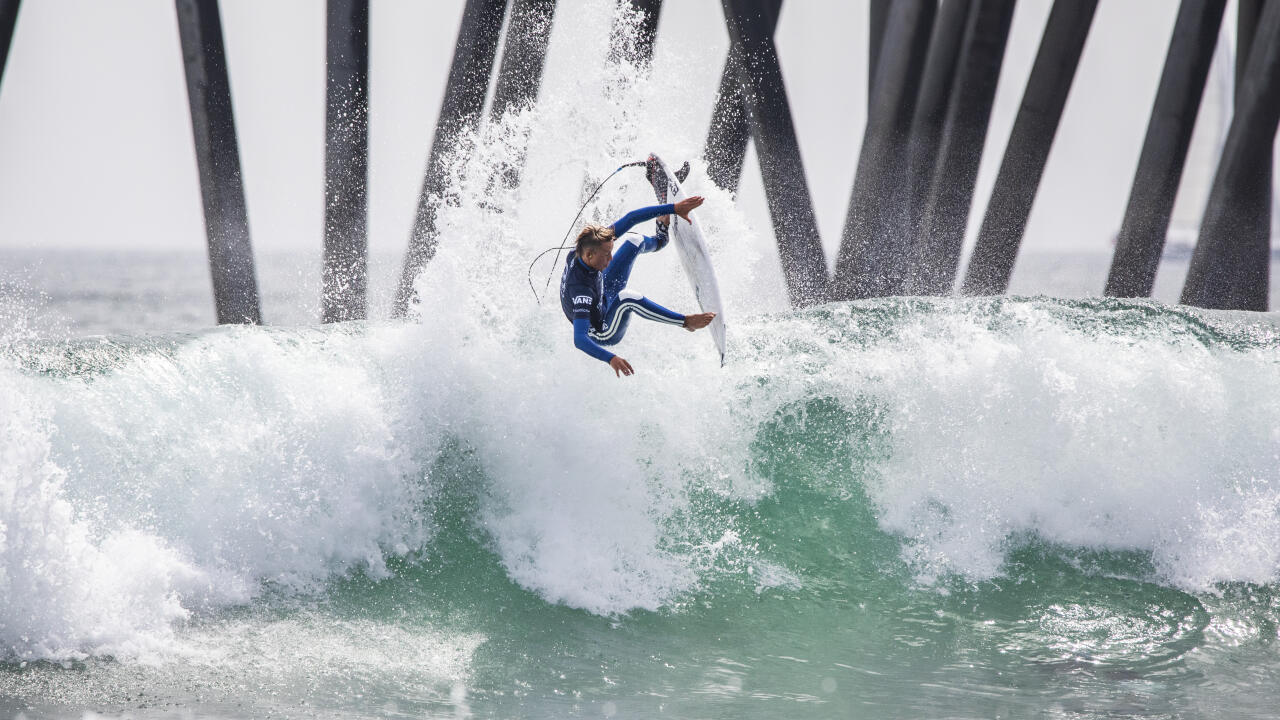 Schilling displayed his versatility and continues to be a threat on the regional rankings. - WSL / Jenny Herron

"I'm so stoked for Kade, to see him win this one was insane and to have all the boys down on the beach supporting us felt amazing," Schilling said. "This one stings some just wanting to get a win really bad but two Finals this year is pretty cool. I'm just stoked to keep giving it my best and see if I can get one of these events this year." Simmers backhand lit up the lineup and pushed her to the top of the podium. - WSL / Jenny Herron

A remarkable run for Simmers ended with her second Pro Junior victory of 2019, at just her fourth WSL event, and is showing what caliber she's capable of when taking on some of the region's best competitors. Simmers found herself alongside reigning WSL World Junior Champion Kirra Pinkerton, 2018 WSL World Junior runner-up Keala Tomoda-Bannert, and 2017 North America Regional titleholder Alyssa Spencer.

The 13-year-old received a gift from Mother Nature as the clock wound down past the two-minute mark and unleashed her backhand attack to garner an excellent 8.53, needing a 7.11, to overtake an immaculate performance by Spencer.

Spencer, 16, has begun to shift her focus toward the QS though keeps a balanced persepective. While she felt the bitter sting of losing both her Round 4 heat in the QS 10,000 and having the Pro Junior title stripped from her in the dying seconds, Spencer remains positive moving forward into a big back-half of 2019.

"I was so happy to be in the Final with three amazingly talented girls and I think we all put on a great show, and also show everyone how the girls are really pushing the level," Spencer said. "I'm still focusing on the juniors as much as I am on the QS and just taking it all in. This year I'm just looking to have fun and surf as many heats as I can. I'm super grateful to be on this journey and I'm excited to see what the rest of the year has to offer."

The next event North America Pro Junior event on schedule is the RVCA Pro Junior September 27 - 29.

The Challenger Series threat and current North America No. 4 posted a pair of near-perfect 9's in her Quarterfinal bout.

Former Super Girl victors, Challenger Series threats, and local spoilers are all ready for the starting horn in Jacksonville Beach.

Women's Round 2 action wraps with big names in the mix, and Juniors gear up for the Semifinal's at the Vans US Open.

Some of the world's best begin to gather at Huntington Beach, California, in preparation for the next major Qualifying Series event.

- WSL / Sean Rowland
Monday, July 1, 2019
Vans US Open Of Surfing Pres. by Swatch Brings Some of the World's Best to Huntington Beach

Some Of The World's Best Men and Women Competitors Return July 27 - August 4.