A week spent of event organizers picking apart the tides to power through the Men's Qualifying Series (QS) Vans Pro Virginia Beach, VA QS 3,000 and Vans Pro Junior culminated in an extravagant finish in both events with Luke Gordon and Crosby Colapinto earning their respective wins. Conditions improved even more from the start of Saturday's Nor'easter and provided three-to-four foot windswell that Gordon and Colapinto put on an impressive showcase in throughout their run to the Final.

This marks both of their maiden wins on the East Coast and for Gordon, it was one that dreams were made of.

Luke Gordon's Dream Run Ends in Vans Pro Glory
2:16
In a Final that featured Gordon and two of his fellow East Coast natives and an Aussie, the 19-year-old prevailed brilliantly.

A big opening exchange between Gordon, fellow South Carolina native Cam Richards, and Virginia Beach's own Michael Dunphy had the eventual winner posting an excellent 8.33 (out of a possible 10) over his East Coast contingent along with Australia's Sheldon Simkus. The South Carolina native continued building his score line and pushing ahead until the final exchange witnessed all East Coasters get last-second waves to move the Australian to fourth. For Gordon, it proved to be his best of the event and posted a near-perfect 9.27 to close out his QS 3,000 victory.

"That was literally a dream come true getting to surf a Final with those guys and I can't believe that happened," Gordon said. "I grew up watching them surf and do all their craziness. Then Cam started with that 7, then I got an 8 and Dunphy got an 8 -- and the energy was just building. It just came down that last second." Gordon's aerial attack was the sealant in a defining win. - WSL / Andrew Nichols

This marks Gordon's second-career win after earning his first last month at the Surf Open Acapulco and moves him nearly 50 spots up the rankings to inside the Top 40. The newest threat to QS elite now prepares for a major European leg in hopes of continuing this incredible momentum through a prolific summer.

"It hasn't really hit me yet but it's going to," Gordon added. "I feel like I'm in a dream and someone's going to pinch me then I'll wake up and it's today again (laughs). I knew with this northeast wind, that's my bread and butter, and I love this stuff. I grew up surfing waves like this and I just went into heat thinking surf this round, then before my next heat I'd just think 'Well I made it this far, just make the next one.' Then I was in the Final and didn't even think about winning but when the horn blew I just thought why not just go for it." 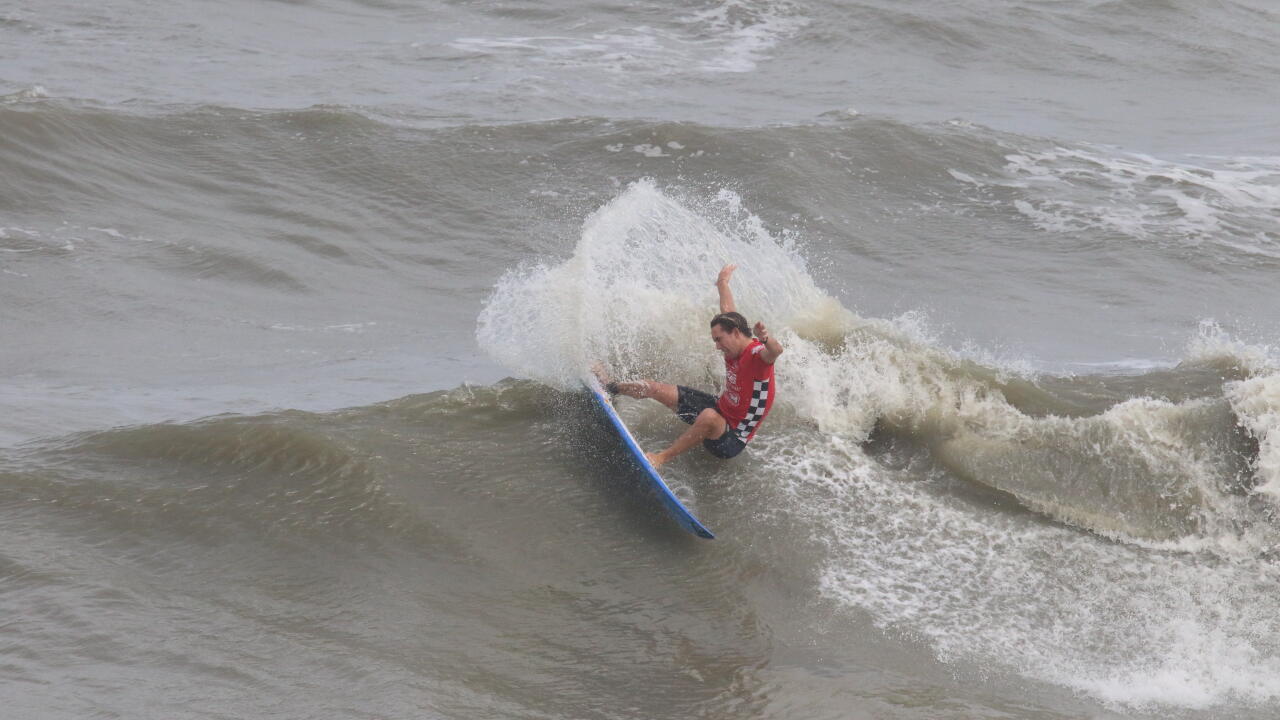 Virginia Beach was out in force with a crowd behind the East Coast natives, but none more so than their own Dunphy. The 29-year-old's signature power hacks were met with cheers while his falls sent "awes" throughout the spectators. But, this marks a much-needed result for Dunphy after powering his way through finals day, beginning in Round 4 with a close call in the Quarterfinals before finding his rhythm, all the way to a runner-up spot and his first Finals appearance since this event in 2016 when he also earned second.

"It was good to get back in the Final and just to have everyone here watching and supporting was really cool to surf some heats in front of the hometown and do well," Dunphy said. "Obviously when I got to the Final and I got that 8 I was going to win. I had so many things running through my head that reminded me of the year I won so it was a little bit of a let down not to win but second-place is good. I've definitely been in a slump competitively, the last few months I haven't even made a heat, after a trip to Indo so competing in US Open and South Africa was pretty ugly. But now we go to Europe for a month for three big events in a row so hopefully this is that momentum builder." Richards left nothing in the water after a brilliant day of competing earned him a third-place finish. - WSL / John Ferguson

Noteworthy finishes for Richards and Simkus earned them 1,680 and 1,580 points respectively as both now turn their attention to Europe alongside their fellow Finalists. 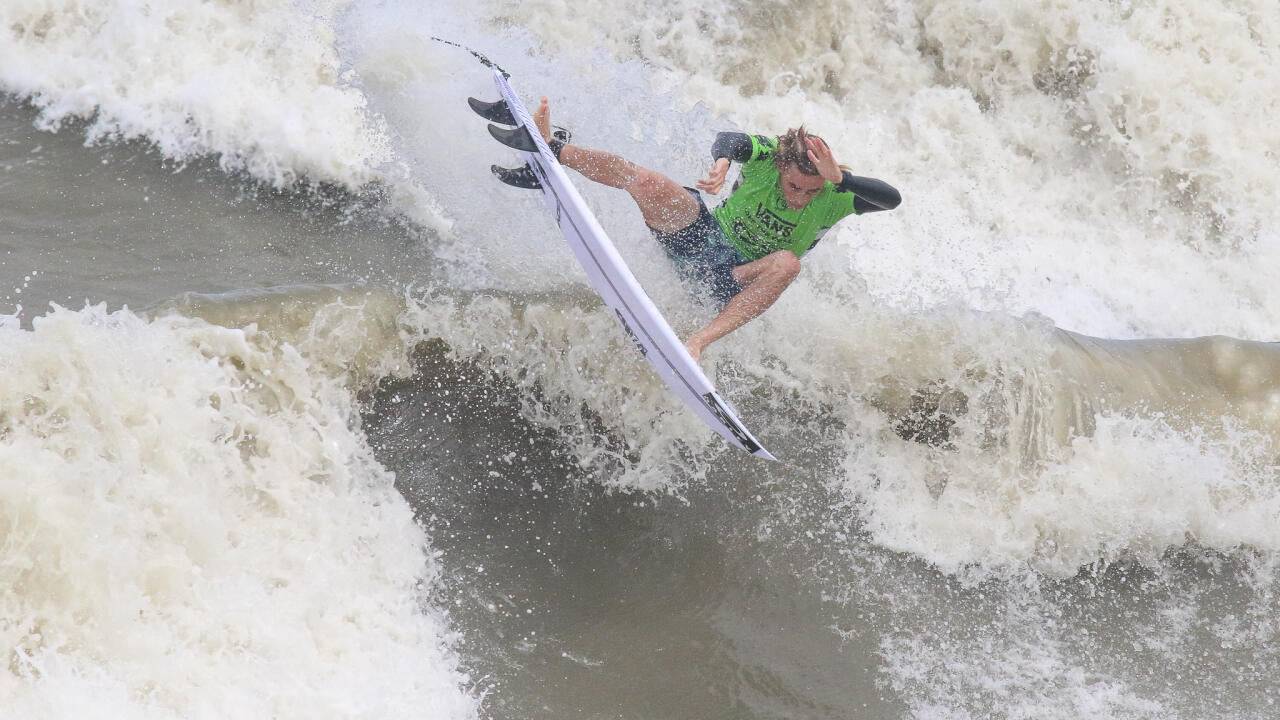 Simkus looked to be on his way to a solid result with a big air reverse that kept him fighting. - WSL / John Ferguson

Moments before that incredible showdown, the Vans Pro Junior Final witnessed it's own brilliant performances led by San Clemente's Colapinto in dominant fashion to finish. Florida's Tommy Coleman kept pace on the opening exchange before Colapinto took over the affair with a 14.80 (out of a possible 20) using his combination of powerful turns and aerial flair. Japan's Miyu Furukawa made a late charge that pushed him to the runner-up spot, edging out Coleman to third-place and Jett Schilling to fourth -- his second of 2019.

"It's so good since I haven't done that well in the Pro Juniors this year so I'm stoked to finally get a win," Colapinto said. "I signed up late so I wasn't meant to make it in but I'm thankful for the wildcard and psyched it worked out the way it did. I felt really focused and confident in my surfing after preparing all week leading up to this event by training at home, and now I'm here." Colapinto's consistent forehand attack led him from a wildcard all the way to the top. - WSL / John Ferguson

A hiccup from still North America No. 1 Kade Matson in the Semifinals narrows the gap between himself and now Colapinto who sits with 1,700 points. But, Colapinto's focus is shifting gears as he prepares to make the change from Pro Junior to full-time QS competitor.

"For the rest of the year I'm going to be more focused on the QS, even though I want to get back to Worlds, I'll be putting more work toward QS events looking ahead," Colapinto added. Coleman also gains ground back toward his ambitions of joining the contingent at the WSL World Junior Championships by jumping back to No. 4 - with the Top 3 earning their place among the WJC elite. While this event doesn't give Furukawa points, the Japanese competitor gained plenty of experience moving forward and can take this momentum ahead into the rest of 2019.

"That was a really fun Final even though a win would've been great but I'm just happy the waves got better," Furukawa said. "These waves are similar to home in Chiba and I was very comfortable out there. It's good to surf against these guys because we will be surfing against each other for a long time so it's all experience and I'm very grateful."