Synopsis:
Today's chart shows a complex area of low pressure stretching roughly between Ireland and Cape Farewell, with a developing frontal system on its southern flank. This will persist over the next few days, with a moderate to strong north-westerly airstream generating some swell northwest of the Azores. Hurricane Humberto is still near the North American East Coast, but is expected to start moving across the Atlantic by the weekend. Local pressure gradients are stronger than previously forecast, with a moderate westerly airstream over the Azores. 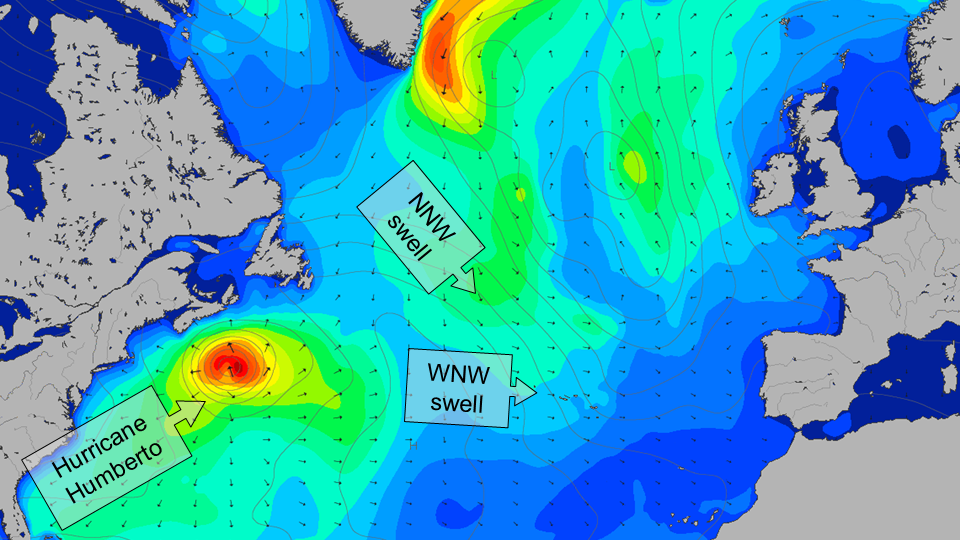 Outlook:
On Friday a diminishing west swell mixes with a wind-driven northwest swell and a short-period bump from the northeast. Wave heights are around three or four feet at first but picking up steadily, perhaps exceeding six feet by the end of the day. Winds are strong cross-shores from the southwest at first, quickly veering onshore from the northwest and remaining strong all day.

On Saturday the ragged northwest swell continues, combined with an increasing NNW swell and a small, very long period west swell, which arrives later in the afternoon. Wave heights are well over six feet, perhaps increasing to eight feet or more by evening. Winds are fresh to strong onshores from the northwest, decreasing moderate later.

On Sunday the NNW swell continues and the long-period west swell fills in, before both swells diminish later in the day. Wave heights are around six to eight feet in the morning, dropping to around five feet or so by late afternoon. Winds are cross to offshore from the southwest, moderate at first, increasing fresh to strong later.

Forecast reliabilities are quite good, although there is still some uncertainty particularly with the arrival of that west swell, which depends on what Humberto decides to do over the next few days.