The iconic Soup Bowl of Bathsheba, Barbados, can experience an array of conditions and weather sitting at the tip of the Caribbean and that was evidence today - along with the concept of anything can happen in any given moment.

From rain to sunshine, competitors powered through Round 2 of both the men's Qualifying Series (QS) Thomo QS 1,000 in Memory of Bill Thomson and Live Like Zander Junior Pro In Memory of Zander Venezia. The chase toward the North America QS Regional Title continued to unfold between Noah Schweizer and John Mel with early eliminations playing a massive factor in the three-to-five foot windswell still on offer and near-perfection from the defending event winner.

Thomo QS: Chauncey Robinson Returns to Form
0:26
The defending event winner recovered from a near-elimination in Round 1 to near-perfection Round 2.

Reigning Thomo QS victor Chauncey Robinson returned to his true, Soup Bowl form with an immaculate 9.50 and 17.43 heat total - both event bests. Robinson's lackluster start nearly witnessed an early elimination for one of the lineups most consistent competitors - earning three total Finals in three years between the Pro Juniors and QS. Barbadian duo Bruce Mackie and Jordan Heaselgrave stunned those in attendance after taking down current North America No. 1 Noah Schweizer in Round 2 Heat 5 with Mackie continuing to find his form once more. Heaselgrave's early start and backup secured his runner-up, advancing over Schweizer who fell just .70 short of the required score on his final attempt and no longer controls his own fate.

"It's always nervous having your friends in a heat like Jordan (Heaselgrave) because it's early rounds you both want to make it to the finals day," said Mackie. "I'm very happy to see both of us see through when you have to surf against Noah (Schweizer), he's super dangerous and I don't really know Caleb Crozier too well but I saw him ripping this week so it wasn't going to be easy. The waves got better today so we just had a good time and it's starting to feel like familiar Soup Bowl which suits my style of surfing way better."

John Mel: From Surviving to Thriving John Mel now has a the window to overtake Schweizer after starting Round 2 with a bang. - WSL / Andrew Nichols

North America No. 2 Mel now has a chance to claim the 2019 Regional Title but still has plenty of work to do after thriving in his Round 1 Heat 1 redemption. Mel came out swinging before Schweizer was eliminated, earning an excellent 8.00 to find his rhythm after nearly being eliminated in Round 1. The work is far from done for Mel, who will need to break into finals day for a chance at overtaking Schweizer to claim a maiden regional title.

"It was nice to start a heat like that finally - it's been a minute after being on the buzzer-beater program for awhile (laughs)," said Mel. "The waves are a lot better from yesterday which helped and it's just one of the best waves we surf all year on the QS so I'm stoked it cleaned up. I've never seen it so windy and blown out than I have yesterday but there was more wall today to open up on." 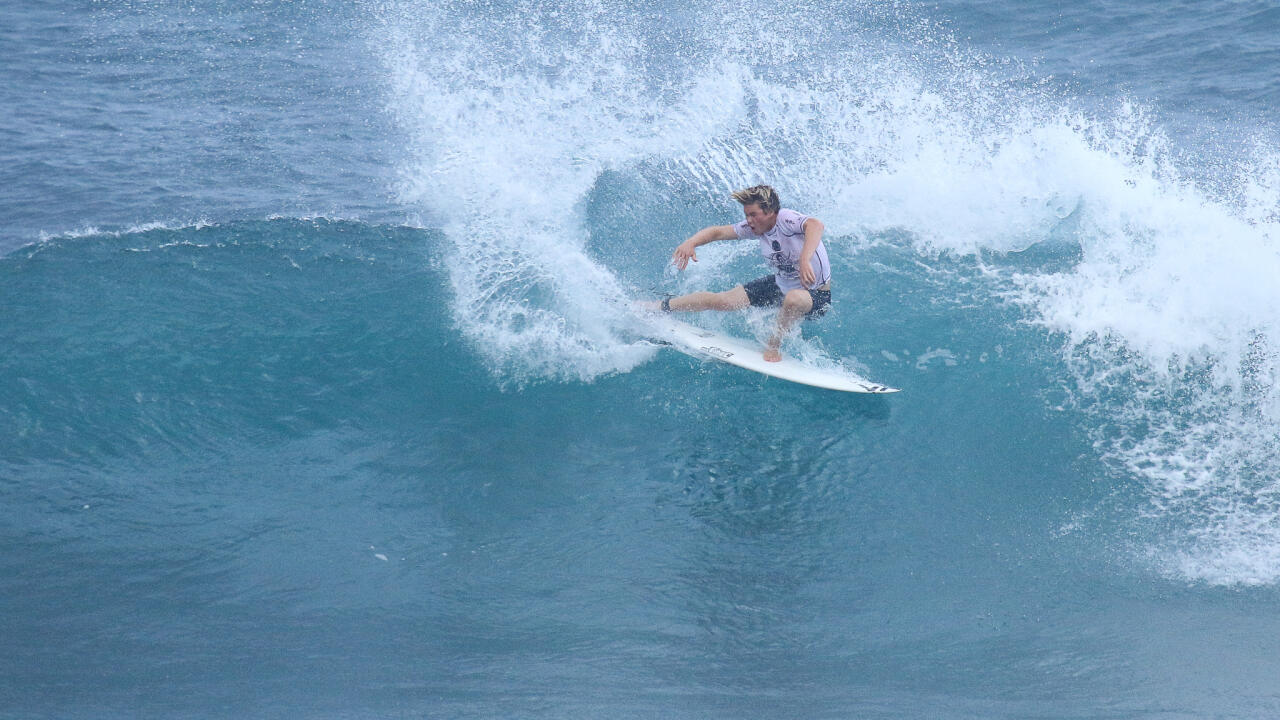 After a debut loss in the Live Like Zander Junior Pro, Lindblad came firing back in the Thomo QS 1,000 with a vengeance to lock in a 7.57 and blast his way into Round 3 over local, and overall QS standout, Josh Burke who nearly faced elimination with Blake Speir providing a big fight. But it was the San Clemente, California, native who ran the affair despite being just his second day of competition ever at Soup Bowl - finding a small resemblance to home.

"It feels good after having a shocker this morning but it was hard to figure out the lineup with waves breaking up the point and down the point," said Lindblad. "Finally had a heat where I found the right spot. It felt good to finally find a wave with some good down carves and reminds me of Lowers but just way steeper. It's never fun to lose in an event but it'll be nice to just focus on one now."

Event organizers will reconvene at 9:00am AST to start the Live Like Zander Junior Pro women's event before moving into junior men's Quarterfinals and Thomo QS Round 3 battles.

Jordan Heaselgrave, Jacob and Josh Burke all enjoying a bit of home before the Thomo QS 1,000 In Memory of Bill Thomson.