A massive day of opening affairs unfolded at the Corona Open China hosted by Wanning, a men's and women's QS 5,000, and along with it some stunning moments of brilliance. Men's competition took center stage with the 24 heats of Round 1 now in the rearview and more than enough action to entertain those in attendance with some of the world's top QS threats putting on a showcase.

Two-to-four foot (1 - 2 metre) swell pulsed into Riyue Bay's left-hand point break throughout the day and provided a brilliant canvas for some of the top QS threats on hand. Women's competition was called off for the day with a likely start when the event resumes.

Qiu Zhuo notched a milestone feat for his country as the first Chinese competitor to advance in a major WSL QS event. The 16-year-old edged past Jackson Butler, needing a 4.27 (out of a possible 10) and earning a 4.50, in the final minutes. Zhuo looks to capitalize on the opportunity at hand with 5,000 points in his home country and surfing alongside some of the world's best.

"I feel so happy right now and I'm so excited this being the first time WSL has had a big (QS) contest here," said Zhuo. "I just want to represent my country and it feels good to make it past the first heat. (I was) a little bit (nervous) but I talked to my coach and it feels way better when they tell me what to do - catch better waves and just do what you can do. (Surfing against these guys) gives me more experience. I want to be on the CT when I'm older and it's something I'll try my best at."

Some surfers stood apart from their follow contenders and San Clemente, California's, Houshmand did just that with a dominant forehand attack. The 19-year-old's variety of major maneuvers garnered an excellent 8.33 (out of a possible 10) and finished with (one of) the day's highest heat total of a 15.16 (out of a possible 20). 2019 was a breakout year for Houshmand and the young QS competitor now looks to go bigger in 2020.

Houshmand Drops the Hammer at Riyue Bay
0:55
The 19-year-old put on a forehand clinic on opening day at the Corona Open China hosted by Wanning.

Swell continued to deliver stunning moments with Moniz finding the day's best single-wave score of an 8.50 to put himself all but out of reach from his opponents. The Hawaiian's backhand looked in great rhythm during Round 1 Heat 20's afternoon hours as day one of competition neared its end. A fresh year ahead, Moniz hopes to join his younger brother Seth among the world's best and showed he's up to the challenge right out of the gates - hoping to join his sister Kelia as a Riyue Bay victor. "We have so many waves like this at home so it's pretty easy to surf knowing my boards all work," said Moniz. "The pace of the wave is really nice and once you connect with the first turn you just keep going up and down. It's so different from what we travel to but this wave is way better than a lot of the stops we have and I'm stoked I can. I'm happy to have an event right away after doing the Pipe trials then just enjoying some holidays with family." 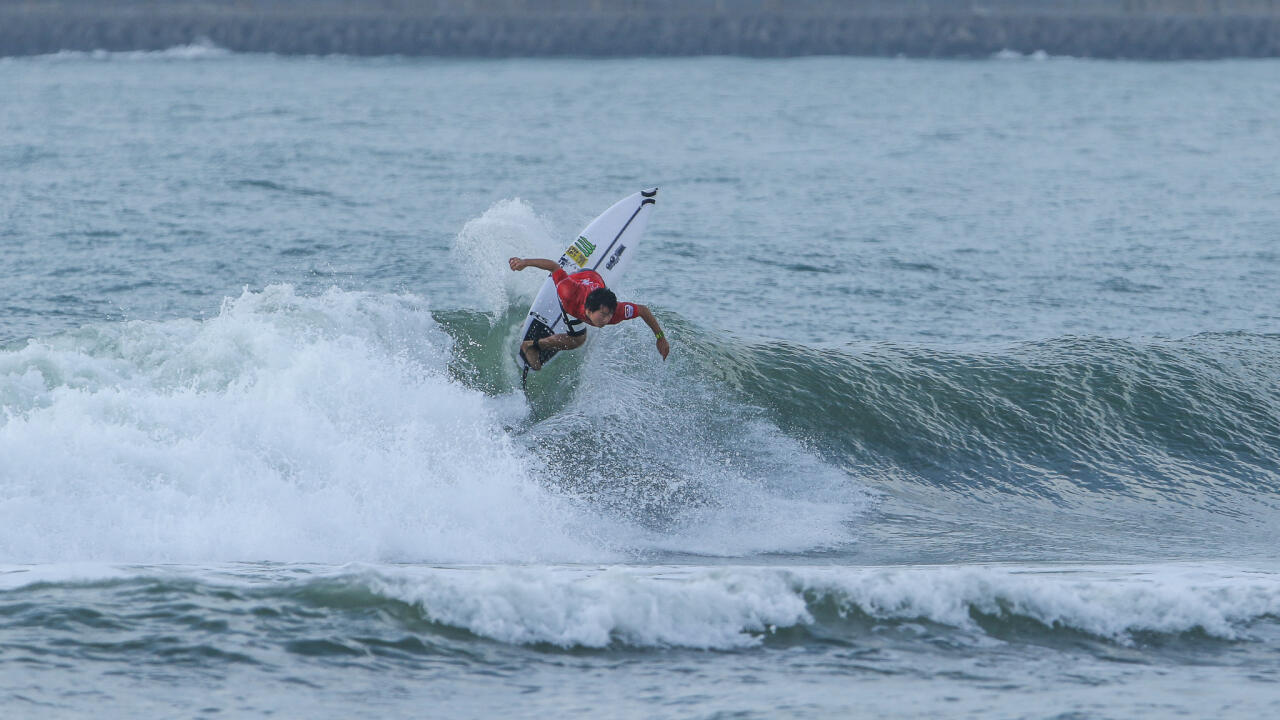 Oharra looks to regain his form heading into 2020 and started brilliantly in China. - WSL / Andrew Nichols

One of Japan's top competitors Ohhara came out firing on all cylinders and led the way among his fellow compatriots traveling from just off mainland Asia. Ohhara's solid 2019 season unraveled in the final events of the year but the work he put in early helped keep him among the Top 50 heading into the early season start here at Riyue Bay. The 23-year-old unleashed a defiant backhand strike throughout his 2020 debut to notch an impressive 15.00 heat total.

"This is my first time here in China and it's totally different than Japan but it's still Asia so I feel comfortable here," said Ohhara. "When I saw the schedule come out I thought ‘Gosh, it's super early' (laughs) but because last year I didn't do well at the end of the year I wanted to start early and start working for a lot of points. I saw the footage from five or six years ago and it looked really fun so I thought it'd be good trip with some of the boys."

Ohhara is joined by a plethora of Japanese contenders including Joh Azuchi, Shuji Nishi, Yuri Ogasawara, Arashi Kato and Rinta Oooto, each winning their respective heats, among more of their compatriots joining them.

Asing's Embracing the Challenges
1:55
The former CT competitor gets to an early start in 2020 for his campaign toward re-qualification.

Keanu Asing separated himself from his fellow former CT competitors including Joan Duru and Patrick Gudauskas, all advancing, with an excellent performance. The Kewalos, Hawaii, native showcased his world-renowned backhand that helped put him among the world's best for three-career years and now looks to get back there once more. Despite some brilliant performances from some of the top QS threats, one of the world's most well-rounded waterman Kai Lenny witnessed firsthand the QS grind with one of its warriors Nicholas Squiers dismantling the heat. Lenny joined a handful of top-seeded competitors to face early elimination as one of Europe's top upcoming competitors Justin Becret fell in his debut as well alongside 2019 WSL Junior Championship runner-up Kade Matson, standout competitor Kauli Vaast and more.

Event organizers will convene at 6:45 a.m. CST to determine a possible start to either men's Round 2 or women's Round 1 of competition.

The Corona China Open QS 5,000 hosted by Wanning will run at Riyue Bay, Hainan Island, Wanning, China in the best conditions between January 6 - 12. Tune in live throughout the event window via www.WorldSurfLeague.com, Facebook Live or the WSL App.