After several days with variable winds and swell directions, the clear blue barrels typical to Fernando de Noronha finally showed up on Friday for Day 4 of the QS5000 Oi Hang Loose Pro Contest pres. by Eletron Energy. Sunny skies, offshore winds and barrels breaking in both directions had the competitors frothing to hit the water as soon as possible. Filipe Toledo (BRA) continued his outstanding performance by posting a 16.57 total in Heat 1 of the Round of 24. His first keeper came in at a 7.50 with a combination of turns then added a 9.07 on a deep barreling lefthander that seemed unmakeable. Toledo has still kept his air-game tucked away, leaving his fireworks stored for later rounds.

"The real Cacimba showed up today," said Toledo. "There are some great barrels out there and it's super fun. I found that wave with a barrel that just kept on going and it was the difference maker. I'm doing what I love most, I'm super happy with my life and I just try to take advantage of my time here. I'll take a stroll down the beach with my wife, I've been eating well and feel ready for tomorrow. Next heats will be man-on-man so it's getting to the nitty-gritty." 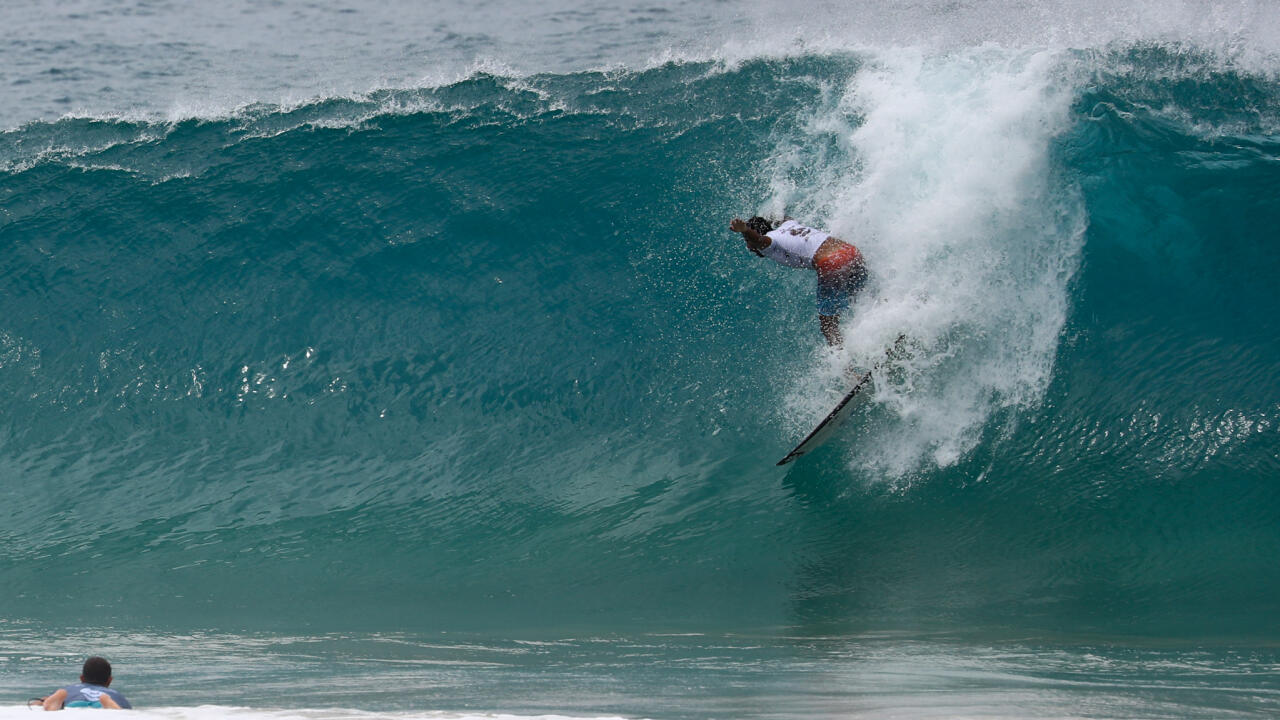 While Toledo scored the day's highest heat total, Edgard Groggia (BRA) was in the right place at the right time and lucky enough to be privileged with the bomb of the day when perfect, transparent righthand peak popped up. Groggia paddled full-tilt, air dropped down the wall, disappeared completely, then flew out of the barrel with his arms outstretched in a moment of glory with the crowd erupting. The judges agreed, deeming it the highest scoring ride of the contest so far with a 9.57.

"That wave was amazing, but each moment was incredible too," exclaimed Groggia. "I felt something special as soon as it appeared in the lineup and I knew it had the chance to be a high score. I almost didn't make the drop because it was so steep. Keeping my balance in the tube was super difficult, but it was also hard keeping my balance after getting hit with the spray. It was an incredible ride and I feel like it was meant to be. It was a blessing." Groggia will now be matched up against Weslley Dantas (BRA) in Heat 2 of the Round of 16, but commented on his childhood friend Filipe Toledo, the current #4 ranked surfer on the Championship Tour (CT).

"We've both been placing some high scores in this event, but I've never thought about it as outdoing one another. He's on a different level. We used to compete against each other all the time as kids, but he was on another level even back then. Fast forward to now and he's on the forefront of progression. But he's still the same guy, super humble, friendly with everyone and helps out a lot of athletes behind the scenes. He's helped me out in the past and is an inspiration to a lot of athletes. Hopefully I can make it to the Finals with him." 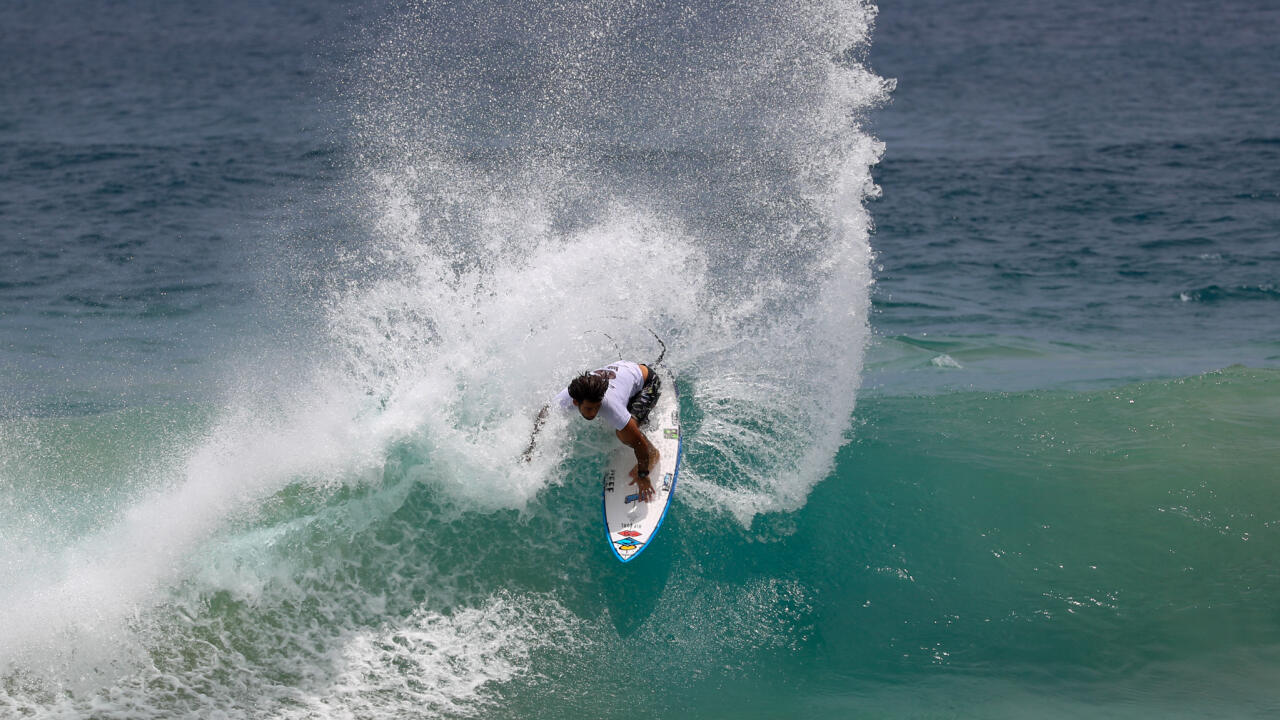 Mason Ho (HAW) has been flying under the radar in Fernando de Noronha and normally doesn't compete in many QS events throughout the year. But as soon as the barrels showed up today, the young Hawaiian turned into a wave magnet steezing out of the tubes at Cacimba do Padre. Mason caught two deep righthand barrels today for a 14.97 total which included an 8.57 on his best ride. Maxime Huscenot (FRA) advanced in second place with Luan Wood (BRA) and last year's event runner-up Yago Dora (BRA) being eliminated.

"It's so much fun, Fernando de Noronha is like another Hawaiian Island," said Ho. "The last couple of swells at home have been just like this at the Ehukai sandbar, so it felt like I've been practicing for the first time (laughs). I think I'm good, I think I'm ready. When asked about having a good claim game after a good ride, Ho stated:

"Just a little expression of happiness, Brazilians are good at it too. Hawaiians and Brazilians, we claim it, no problem, all fun. Mahalo and obrigado!"

Last year's event winner Jadson Andre (BRA) has been one of the in-form surfers of the event and continued his dominance on Friday. He advanced in both of his heats today, winning the latter in a close race with Alejo Muniz (BRA) and Cauã Costa (BRA) by using his patented tail-high air reverses. "Things are lining up pretty similar to last year," said Andre. "I feel like I've been performing well and advancing like last year, with airs and barrels. I think about these things a lot and makes me believe I can win the event again. I love this place and feel a deep connection to it."

Jadson kept busy in his heats, opting to take off on a number of waves to get his scores. Now that the next rounds move to man-on-man heats, his strategy will also see adjustments. "Things are different when you have two or three other people in a heat," continued Andre. "You can be a little more patient and wait for a good set when it's man-on-man. You don't have to paddle for everything. You've got to picture in your mind what you're going to do in a heat, but still be open to adapt if things are not working out."

A call is set for 7:00 am local time for continuation of the Oi Hang Loose Pro Contest presented by Eletron Energy. Finishing out the Round of 24 will be Noe Mar McGonagle (CRI), Thiago Camarão (BRA) and Maxime Huscenot (FRA) in Heat 7.