The ocean continued to provide immaculate conditions at the SLO CAL Open at Morro Bay, a men's and women's Qualifying Series (QS) 1,000, with five-to-seven foot surf powering into the lineup. Competitors not in rhythm with the ocean paid for it with consistent waves coming down on them. Men's competition completed Rounds 3 and 4 in their entirety as the women made their debuts in amazing fashion with Round 1 in the books.

The men's competition wrapped Round 3 before the women took to the water but weren't done and dove into Round 4 battles before the day was finished - and battles ensued.

Right out of the gates one of the event's highlight heats got underway with former Championship Tour (CT) competitors Brett Simpson and one of Brasil's original sparks of the sport Neco Padaratz took on the younger guard of Taj Lindblad and Micky Clarke. The elder Lindblad took over the heat heading into the back-half with an excellent 8.17 after multiple exchanges among the action-packed heat unfolded. In the end Lindblad was able to hang on for a big win with his coach Simpson advancing behind him. (Interview in video) 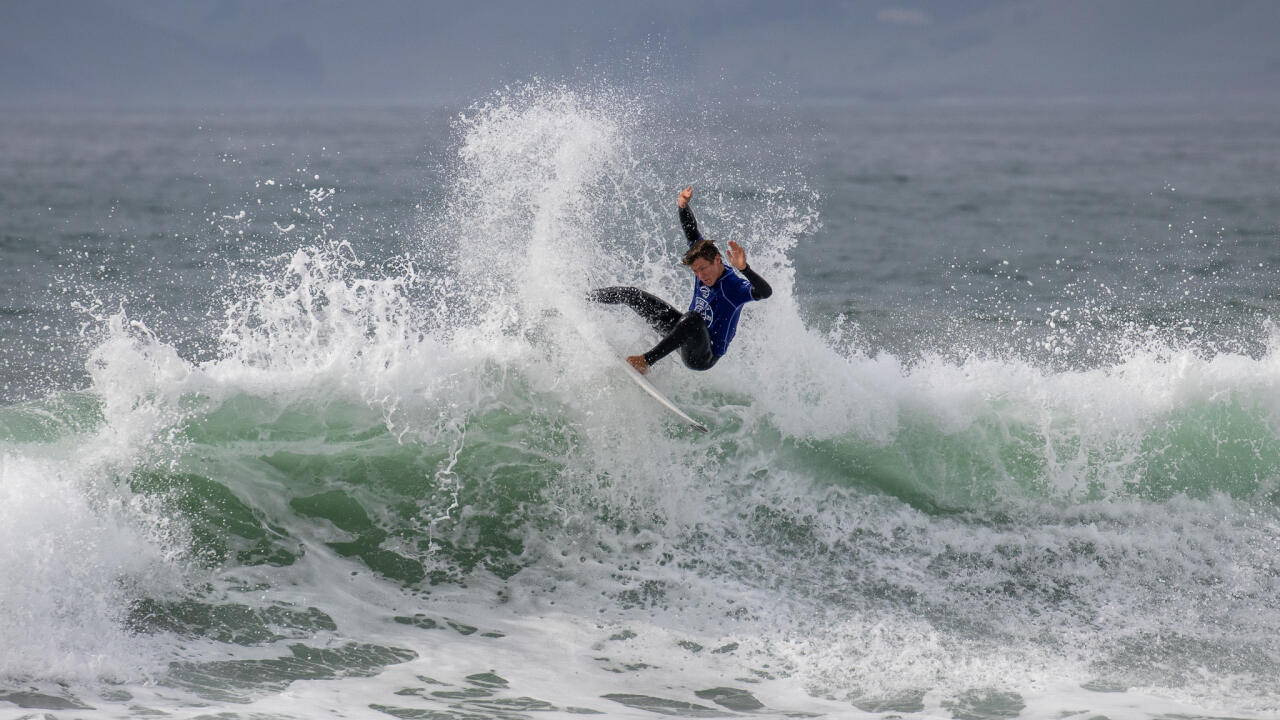 One of the Central Coast's top transplants David Economos has nestled in over the last two years as he attends college just down the road from Morro Bay and showed his comfortability once again with a Round 4 heat win. The 20-year-old looks to keep up with the QS when he can while taking care of his scholastics and shows he still maintains the competitive capabilities to keep up with his peers.

"That was a fun heat with two other guys from San Clemente so that was great to surf with guys I normally surf with," said Economos. "It's pretty nice when there's a competition right down the road from school and I'm basically just trying to surf twice a day, do school and it's a good balance with surfing helping to take my mind off classes (laughs). I'll finish school and see what happens after if I can travel and do more contests but for now just get done with school then I'll have the rest to do what I want." 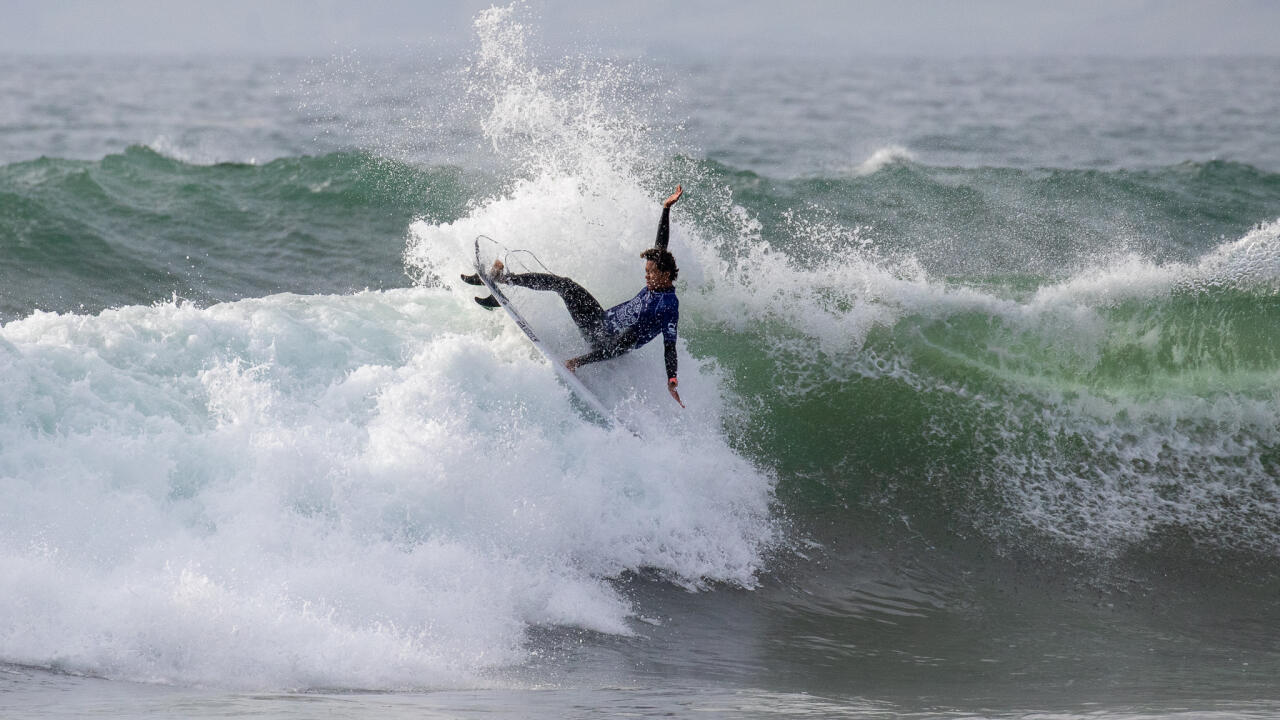 A surprise showing from Ben Benson had even the world traveler taken aback after putting together a five-minute heat to go from fourth to first and overtake a massive Round 4 victory. Benson's rail-game and aerial tactics were on display as he found his rhythm against an in-form Andrew Jacobson, Daniel Glenn and 2016 North America Regional QS Champ Kilian Garland. The Indonesian spends a lot of time in California and showed his experience today.

"I was stressing out a little bit just with my first waves either being kick outs or incomplete so in the end I realize I needed to go for the smaller ones instead of the sets," said Benson. "Just had to go for broke and give it my all. I mainly live in Bali but I've been coming back here a lot with a lot my family living in California and wanting to do the QS more and get on the grind." Ben Coffey's rail game was on full display in his debut and backed it up in Round 4. - WSL / Andrew Nichols

Santa Cruz, California's, Ben Coffey put his name in the bucket as event threats after blasting through Rounds 3 and 4 with explosive victories. Coffey's backhand paved the way in his Morro Bay debut but his forehand took over after finding what looked to be a closeout lefthander that he turned into a 7.50. The worker-by-summer and QS competitor keeps the spark alive with some competitive spirit between himself and brother Sam who's currently in Australia for the leg of events.

"I'll start lifeguarding in late May so I still have time to get some events in and have some fun before working this summer to build up my savings again," said Coffey. "Getting that left finally was great and I thought it was going to close out so I'm stoked to get a score on it. It's great to Sam (Coffey) doing well in events and it'd be fun to be over there with him but it's also good to have that competition between us of who's doing better at events (laughs). I think it helps push us forward and brings out our best surfing." The young generation took over women's opening affairs with reigning North America Regional Pro Junior Champion Caitlin Simmers finding near-perfection. The 14-year-old posted a 9.17 (out of a possible 10) with her aggressive forehand on a pristine Morro Rock righthander and put the field in a combination situation, meaning the other three competitors needed two new scores to equal her heat total, with a day's best 15.50 (out of a possible 20) heat total.

"I just wanted to get a quick start so I wouldn't be nervous and also get a shorter wave so I wouldn't have to paddle as long," said Simmers. "It was really good in that heat but it was a lot of paddling. I'm excited to make it through and keep surfing more heats in these kind of waves."

Recent SLO CAL Open at Pismo Beach victor Sawyer Lindblad showed her ability to adapt and pushed her way from an elimination position to winning her Round 1 battle in the final five minutes. It was the 14-year-old's QS debut earlier this month that yielded her success and she carried that confidence into today's proceedings with an impressive 14.67 heat total. (Interview in video)

Shelby Detmers came out firing on all cylinders to light up a near-excellent 7.67 (out of a possible 10) on her backhand attack in Round 1 Heat 1. The Southern California local, Mexican representative for Olympic qualification, finished 2019 with her best ranking within the Top 100 since 2015 at No. 62 and is looking to restore the competitive fire this season after a Quarterfinal result in Pismo Beach and dealing with injury the last few years. (Newsfeed available)

"It was nice to open up on a few turns but then that set came but thought to myself I'm not going to get pushed in by this set (laughs)," said Detmers. "There's only twenty minutes and I can be tired after. My grandma on my mom's side is Mexican and they live up here so it's great to see her and a lot of my family."

Emily Gussoni Returns to the QS in California
0:32
After embracing her Italian heritage and competing in Europe last season, Gussoni returns to QS competition in California.

Adding their name to a prominent list of heat victors, Emily Gussoni (Interview in video), Ella McCaffray, Brooke Young, Makena Burke and Savanna Stone all started strong moving into Round 2.

Event organizers will reconvene at 7:30am PST to determine a possible 8:00am PST start for either men's Round 5 or women's Round 2 action.

The young talent took over a formidable heat featuring a former and present coach along with a fellow danger man in Morro Bay.

The young contender took down two veterans on his finals day charge toward a first-ever QS win.