Bronte Macaulay has claimed victory at the Doyle Partners Women's Pro, WSL Qualifying Series 5000 event as part of the 35th annual Newcastle Surfest in challenging conditions at Merewether Beach. In an all-Australian final, the West Australian surfer took down fellow Championship Tour competitor Macy Callaghan to claim victory in her first event of 2020. Using her strong backhand technique to post multiple six-point rides, the current World Number 12 scored a combined total of 12.80 in shifty beachbreak conditions to kick off her 2020 campaign in winning form. A Surfest Junior Champion in 2014, the Gracetown surfer looked comfortable all week, posting the second highest heat total of the event with a 17.40 in Round 4, and was again composed in the punchy head-high right-hand breaks throughout the 35-minute final, leading from start to finish to claim the equal-best result of her career.

"I've only won one QS before, so it's nice to get a second one under the belt," Macaulay said. "We've had two months off so it's hard to know where you're at compared to everyone else, to make sure your boards are good and you're surfing good, so I'm just really happy. It's the first event of the year so to take a win, I'm just stoked." 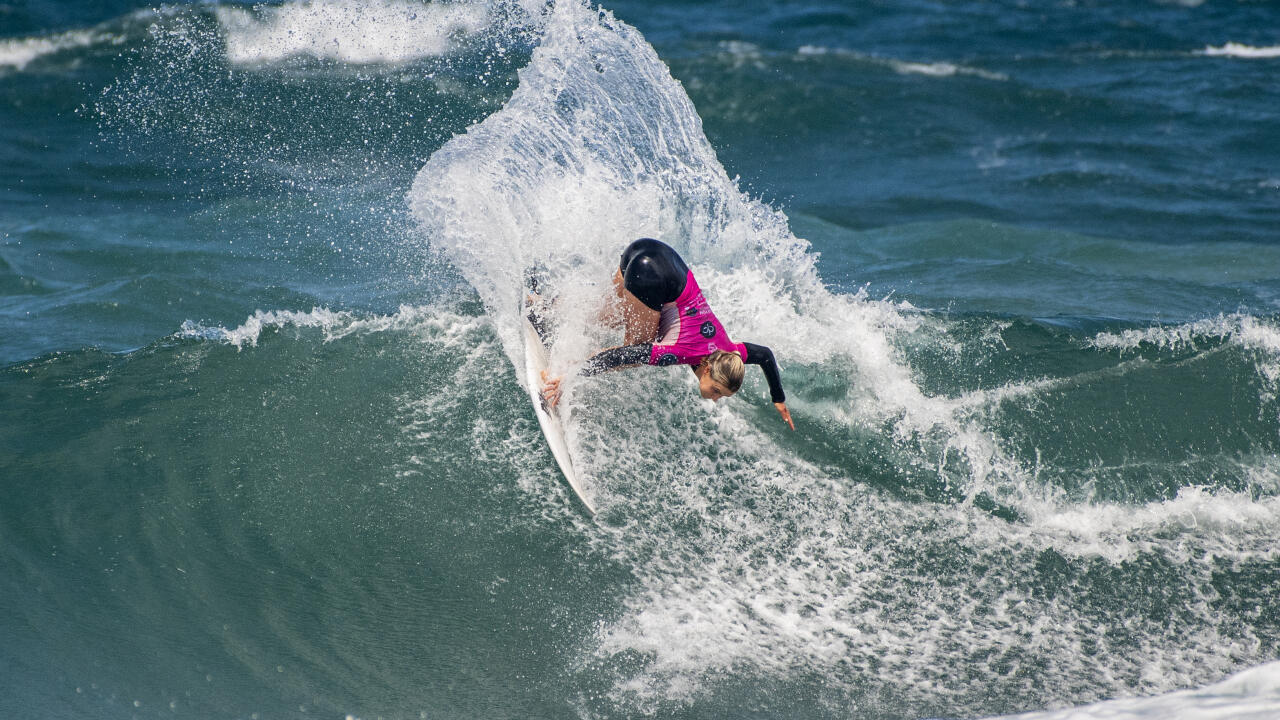 Bronte Macaulay was on fire all week at Merewether with turns like the one above in every heat. - WSL / Thomas Bennett

"This year I want to go well on the CT and hopefully get some big results there, but it's a good way to start the year," the goofy-footer said on requalification and her year ahead. "We both surfed four heats today and are headed straight to Manly tomorrow, so were both really feeling it - but it's a great way to finish the day."

After a slow start, fellow former Surfest Junior Champion, going back-to-back in 2015 and 2016, Macy Callaghan fought her way back into the heat with the highest single scoring wave of the final. Committing to a huge on-rail frontside hack to post a 7.57 and get herself within striking range, it set up a tense final 12 minutes to the day's action. The World Number 17 couldn't find a back-up score however, falling twice in the final moments and unable to find the 5.23 required to move ahead, eventually taking second-place and a confidence-inspiring result before heading to Manly to continue her 2020 campaign.

"I would have obviously loved to have won, but it's a really good start to the year and lots of confidence to come from it," the surfer from Shelly Beach said of her event. "I've got lots of good memories from Newcastle, I won the Pro Junior and the Cadet Cup here that same year when I was 15. I'm excited to deliver what I did here in Newcastle on the CT this year." Former Championship Tour surfer Pauline Ado regrouped after a disappointing 17th at the Sisstrevolution Central Coast Pro to continue her campaign for re-qualification with a strong semi-final finish in a tight loss to eventual runner-up Callaghan. The third-place result is sure to give the French surfer confidence going into the first Challenger Series event in Manly.

Hawaiian Gabriela Bryan failed to back up the highest single wave score of the event after the teenager posted a 9.57 for two huge frontside turns, her quarter-final loss to Champion Bronte Macaulay meaning she leaves Newcastle with a fifth-place result. Also bowing out in the quarter-finals was last-years Surfest Junior Champion Molly Picklum and the Sunshine Coast's Keely Andrews. Two-time event winner Coco Ho also takes away a quarter-final finish after losing a slow heat to equal-third Zahli Kelly, who couldn't improve on her semi-final finish from Newcastle last year. The 35th annual Newcastle Surfest saw women's prize-money brought to parity with the men's through a crowdfunding initiative with a pool of 97 local organisations and individuals contributing to support the event. Now in its fifth year, the crowdfunding initiative was expanded in 2020 to enable additional athletes to compete at the Doyle Partners Women's Pro. Doyle Partners, a Newcastle based accounting firm, was drawn as naming rights sponsor by inaugural Surfest Women's Champion Wendy Botha, who won the event in 1985, and received a valued $80,000 in promotions leading up to and during the event.