Peter "Joli" Wilson, a stalwart of the surf media, has been shooting surfing for more than four decades. Here, the self-described "Memory Millionaire" shares some of his favorite moments from his time in Tahiti. Words and images by Joli.

My first surf trip to Tahiti was back in the early 80's when I was Ad and Promo Manager for Quiksilver Australasia. At this time Teahupo'o was not on the radar as a surf spot.

I returned to Tahiti in the early 90's and Teahupo'o was being surfed regularly, but was still known as just another Tahitian lefthand reef break, where the road around the island stopped because of dense rainforest, mountainous terrain and steep cliffs. The surf spot was just known as ‘The End of the Road'.

I was invited back to Tahiti in 1997 for the first Pro contest to be run at Teahupo'o. The Black Pearl Horue '97 Pro was a four-star WQS event won by a very young Andy Irons who wasn't on the CT at this stage. I've covered the Teahupo'o contests as they grew through the Gotcha Pro WQS, into the Billabong Pro CT's that are running now.

These images and memories from 2005 cover my three weeks in what I'm calling is one of the top 5 contests I've ever shot.

My very first contest at Teahupo'o was the Black Pearl Horue '97 Pro, a four-star WQS event in 1997. Bringing in surfers, media and the crew needed to run this event put huge pressure on the infrastructure of this small village which was literally located at ‘the end of the road', miles away from Tahiti's capital Papeete. 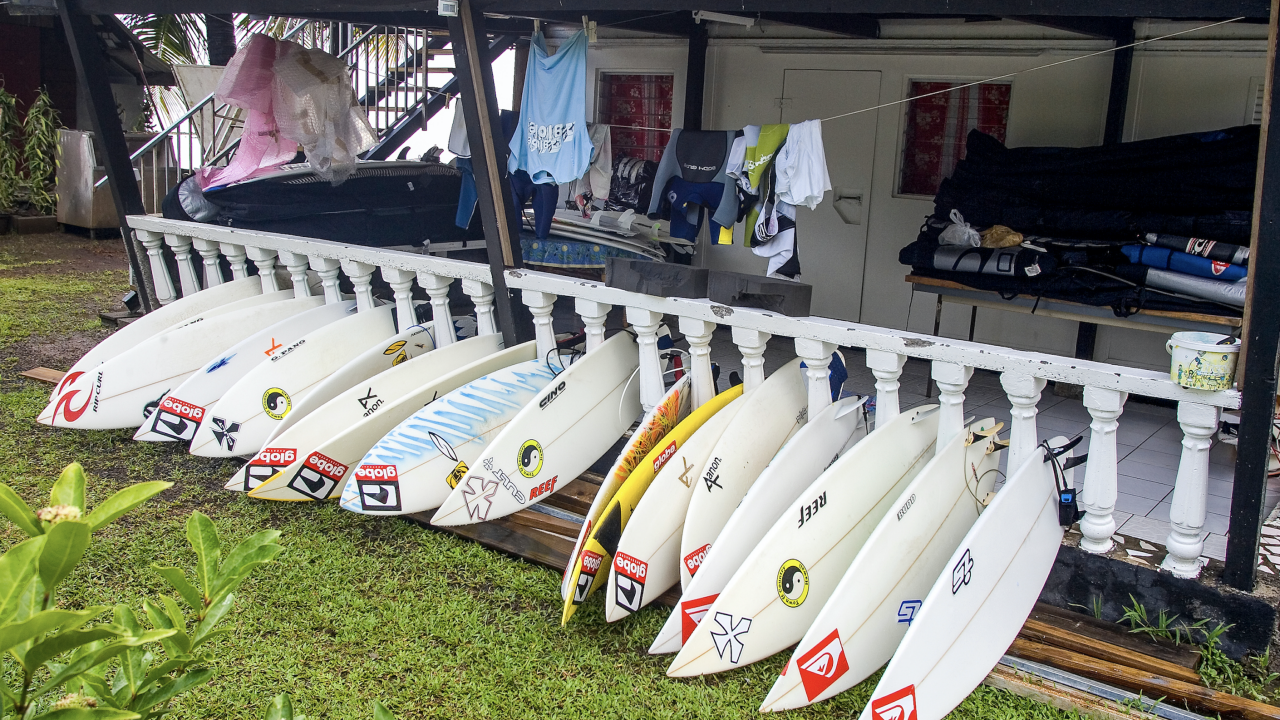 One of the ways to deal with the problems was to have local families host the visitors. I ended up sharing with another 12 or so media and surfers in a large rambling house on the edge of the Teahupo'o lagoon owned by Mama and Papa Teva.

Mama and Papa still host surfers and media during the contests to this day. Over the years Papa Teva has expanded the house with three very basic over-the-lagoon huts, a couple of old shipping containers re-modeled as bedrooms, plus one year he'd add another level with more bedrooms. One year there were 20 people staying in the house that included 14 of the Top 32 surfers in the world. I have to say, it is the most ‘winning' house in Teahupo'o if you look at the list of surfers who have stayed over the past 20 years. With so many people in the house there was always something going on from pre-dawn surf runs in an old, barely seaworthy boat nicknamed ‘The Bathtub' until meal times all taken together at one long table in a lanai that ran down one side of the house. The house has become a Teahupo'o institution…. and if those walls could talk...

The Final: Slater vs Hobgood.

The final of this event was filled with drama. What I remember is Kelly dominated the early stages with Damien holding out for the bomb barrels and always chasing a score. I have to admit as part of the crew staying together at Papa Teva's I was barracking for Damien and he was really putting in on the line to get back into the heat, taking off late and deep. From memory, I think Kelly had already scored a perfect 10 point ride when Damo took off too deep and went over the falls. The Tahitian Water Patrol were right there with him after the wipeout but it was obvious the was in pain with what turned out to be a dislocated shoulder. He couldn't continue to surf which was devastating for him and handed the final to Kelly. On a lighter side his twin brother CJ grabbed his board and started paddling into the line up like a tag team wrestling match to take on Kelly…. the Water patrol had to stop him.

The final continued without Damo or CJ in the water and Kelly scored another 10 point ride to make it a perfect heat. On his last ride he celebrated by emerging from a barrel sculling a Hinano beer. Someone in the floating crowd had thrown him the beer can as he was paddling back out and it was the crazy way to celebrate the win and a perfect 20 point heat score.

During the May Dayz swell I remember Keala Kennelly hanging on one of the boats with the Billabong crew. I could see her with a floatation vest and a tow board and as the day progressed she was getting antsy about jumping in the water for a chance to be towed in. I think the boys in the boat were telling her to wait "….not yet, not yet." Eventually she hit the water and got into the rotation with the other skis in the lineup. Not long after she was towed in to the biggest barrel I'd ever shot of a woman surfing. She slotted the barrel perfectly and punched out through the spit with her mouth wide open in a primal scream before relaxing and grinning from ear to ear.

With surf forecasting we knew that we were going to get a solid swell for the first two days of May. I'm not sure that we really knew how big it was going to be but we all knew it was coming. Most of the Top 45 had all arrived in Tahiti for the start of the Billabong Pro but what hadn't arrived for this swell and didn't arrive until after the swell started to drop were a lot of the guys surf boards.

Laird Hamilton was towed into a Teahupo'o monster wave in 2000 that became known as the "millennium wave" but really, tow-in surfing was still in its infancy for a lot of surfers.

On May 1st 2005 at Teahupo'o if you wanted to surf there was no other option but to tow in, some guys on borrowed boards. With the size and the direction of the swell it was impossible to paddle in and a lot of the Top 45 had a quick lesson in tow surfing. Guys like Andy Irons, Shane Dorian, Bruce Irons and Cory Lopez all towed into the massive waves during the day, along with crew like Garrett MacNamara, Ian Walsh and locals Raimana Van Bastolaer and the Von Zipper Trials winner Moana Drollet. "For any image to become iconic, it needs to speak directly to the viewer, and offer a connection both individual and universal." Steve McCurry - National Geographic photographer. I believe this image of Andy Irons standing tall and relaxed in the belly of a Teahupo'o beast fits the description of ‘iconic'. Andy was at the top of his game. He'd won the World Surfing Champion Title for the previous three years and was comfortable in big and small waves. His body language exudes composure as he stands relaxed and calm with his back foot controlling the trim line in one of the biggest and cleanest waves to come through all day. I equate this image of Andy to the iconic ones of James Dean and Marilyn Monroe and the tag line …. forever young.

This jet ski incident that happened almost 15 years ago today still has me shaking my head when I look back at it. If you have ever had to move a jet ski around on land or get one in and out of the water you know how heavy they are. Dr Google says "The Average Jet Ski Weight Is About 850 Pounds." Basically heavy. When you watch one go over the falls in the lip and not fall straight down the face it is a WTF moment.

On this swell and a lot before it and after it, Raimana van Bastolaer takes on the role of policeman or traffic controller in the line up. I've seen him stop sessions when it got too dangerous or call people into waves from his boat and ski.

The swell was still sorting itself out when this incident happened. Raimana had been towed into a couple of waves already but he'd lost his tow partner and he asked Hawaiian Reef MacIntosh to drive the ski for a couple of waves. Reef explained he'd never done it before and Raimana assured him it was easy and off they went. 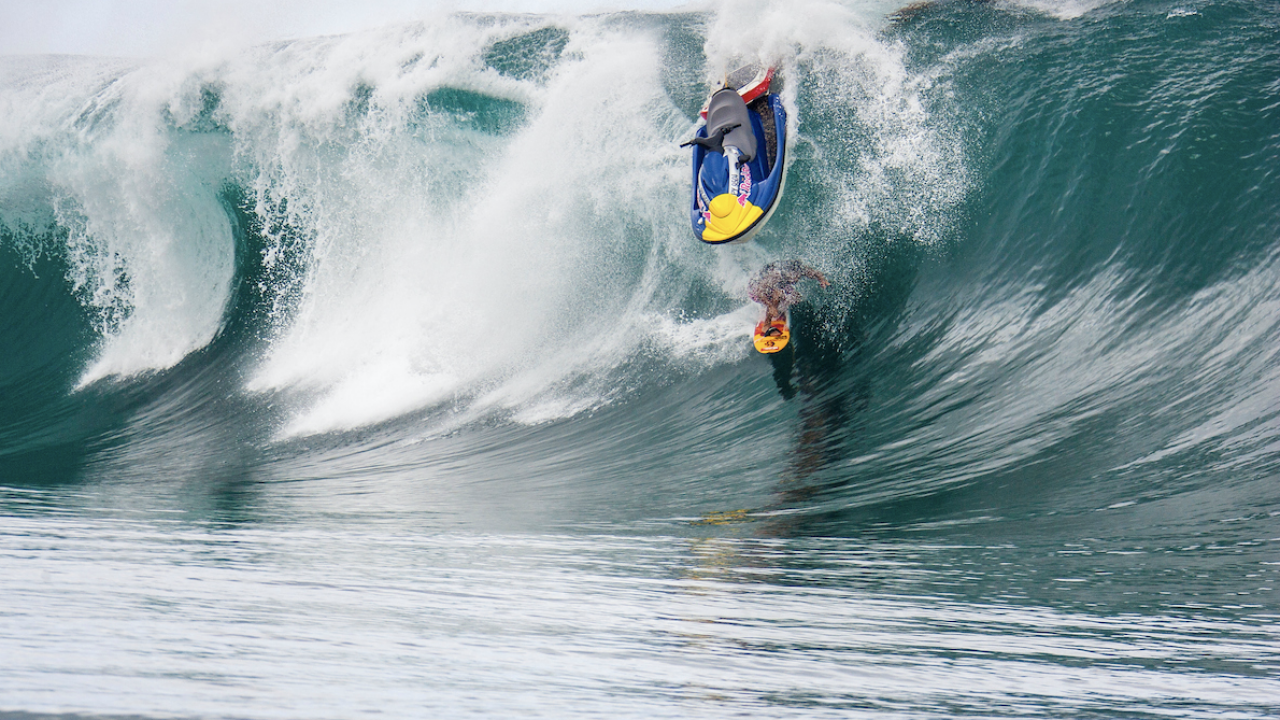 What happened on their very first wave seemed to go down in slow motion. You hear that car wrecks happen in slow motion, well the jet ski going over the falls was one of those moments. Raimana had let go of the rope and was into the wave as Reef kept traveling along the lip checking him out. The Teahupo'o lips are thick and with a swell like this one full of water and powerful. Reef realised too later that the ski was sideways and he had no more power. As he bailed off the ski the lip caught it and pushed it out and not straight down which was very lucky for Raimana as he had pulled into the barrel directly below Reef and the jet ski.

Raimana said later he just saw and ‘felt' the shadow go over him but at the time didn't know it was his ski which was washed into the lagoon and severely trashed by the coral reef. Reef, the person, was devastated and he sat in the bow of one of the boats for hours with his head bowed and was inconsolable.

Day two of the May Dayz swell started with some size which slowly backed off during the morning. There were still tow in waves early but crew were also in the water looking for paddle in waves. This one of CJ's at the time was rated as the biggest one ever paddled into at Teahupo'o. CJ tells the story that he was sitting next to his brother Damien and watching him paddle for it. He was checking his brother's eyes and when he saw him hesitate he swung and with a couple of strokes was into it. CJ says that it was an effortless paddle because all the power and push came from the lip and not from him. All he was worrying about was getting his rail and fins to stick and make the drop. What I was worrying about as he took off was I'd caught sight of the number of frames I had left on my SD card in the bottom of my viewfinder and it was just seven! No motor driving for me on this one. I shot five frames and while CJ was bummed that the wave didn't really barrel I was really happy that it didn't.