Two-time World Champ Damien Hardman was directing the show for the Rip Curl Pro Portugal and like his surfing, his Contest Director calls were direct and to the point. On Day One of the waiting period and he pushed the "Go" button. The men were put off for the day and the women were thrown right into a maelstrom. With a completely onshore mess at the main site there was no Supertubos for the women but a relocation to Lagido, a back up site on the other side of the Peniche Peninsular. The women were sent out in solid four to six foot surf that was kept relatively clean by a howling offshore wind and believe me they were made to work after their four-month break since their last event. The site was in a Bay called Baleal which was protected from the massive waves that had forced the move. There is a small village on the headland across from Baleal accessed by a one way road across the sand. Standing on the cliffs overlooking Lagido you could see spray from the raging ocean rising 50 feet or more into the air and if you did a 45 degree turn you could see huge swells rolling in through a gap in the cliffs and at one stage, even see some of the CT men trying to tow-in on the massive swells. 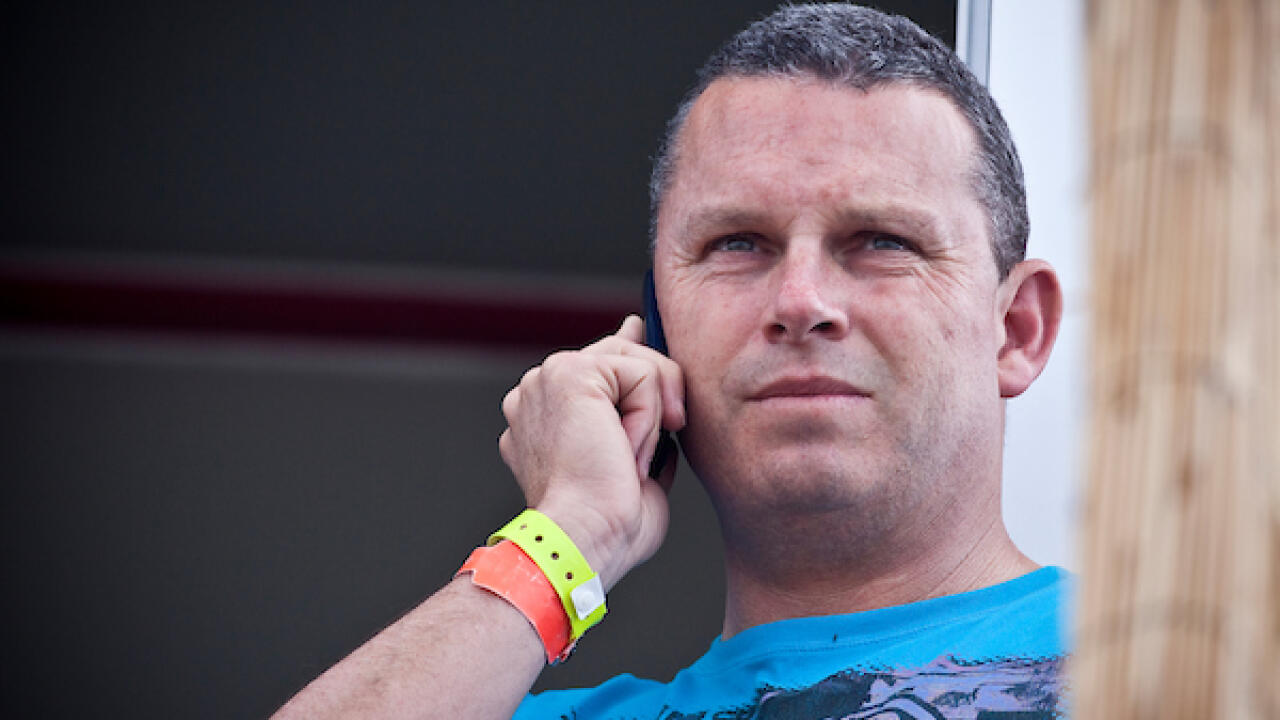 Damien Hardman's calls were direct and to the point - WSL / JOLI

Not the Perfect Start

Reigning World Champ Stephanie Gilmore came into the Rip Curl Pro looking to take out another World Title. She was ahead of Sally Fitzgibbons on the ratings and had an outside chance of sealing the Title in Portugal. There was a lot at stake, a lot of media pressure and at the mobile site, not a lot of places to hide.

Steph had joked at the press conference the previous day that she was looking forward to competing after such a long break but she came unstuck in her first round when the contest wildcard, French surfer Cannelle Bulard, pushed her into second place. Fitzgibbons on the other hand locked in one to the top heat scores of the day. Steph had her revenge and kept her title hopes alive when she met Bulard again in Round 3 after Hardman made the women surf three times that day.

Looking back at my notes from the contest this is a quote from Steph about the conditions.

"It was hard out there today," said Steph on the day. "The wind was so hard at times you were being blown off the back of the waves. There were a lot of closeouts and you really had to pick the right one." The forecast maps for the second day of the event were described as "Dark red turning to purple," by one Rip Curl official. Event staff had a sleepless night as the high tide was around 4 a.m. which was approximately when the swell was due to arrive. It turned out not to be quite the 20-foot monster swell they had expected but big enough for waves to wash through the ground floor of the VIP structure at the main contest site and wash away beach boardwalks and portable bathrooms.

The previous year the contest site was hit by a straight west swell and it trashed the site. In 2010 the storm tracked south at the last minute and the swell had a southwest aspect to it with a slight offshore wind. If either the wind or the swell had been slightly off they would have been in trouble again. That afternoon's high tide had the Supertubos beach closed off and officials once again on high alert. The ocean was completely out of control and waves were washing right up to the door of the surfers' contest area. Had the Rip Curl Pro been on at Supertubos, the surfers could have stepped straight into the surf. It was little wonder they moved the contest to Lagido. The ocean was completely out of control - WSL

Moore on a Tear

With Hardman as Contest Director the adage -- "Never pass up a day of surf" -- was true and it made perfect sense for the women's event to move over to Lagido once again as it provided shelter from the storm and gave Carissa Moore a perfect opportunity to serve up her own version of the perfect storm. The howling offshore wind was holding up a 4-6 foot left-hander which was stormy but contestable and the size increased with the late afternoon incoming tide. On one side of the draw was Stephanie Gilmore, never really dominating her heats, but doing enough to get through her heats.

On the other side was Moore and in her first year on Tour, charging through her heats, knocking out Sally Fitzgibbons in the quarters and Australian Claire Bevilacqua in their semifinals. Meanwhile Gilmore sat in front of the competitors' area looking on with a towel draped over her head. She didn't look comfortable or confident and it showed when the two hit the water for the final. Moore had the defending world champ in a combination situation midway through the final and never looked back. It was Carissa's second win of the year and helped her cement The Rookie of the Year title for 2010. This was Carissa Moore's first year on Tour - WSL

The Search and Tó-Zé Correia

Rip Curl had been running The Search marketing campaign for a few years before they dovetailed it into CT events. By 2008 they'd been to Reunion Island, Chile and Bali and in 2009 they picked Supertubos, the sand bottomed beach break in Portugal as its next stop.

Rip Curl has it's Portugal HQ in Peniche but I'm sure it was more to do with the Supertubos wave, one of the best beach breaks in the world, than the proximity of their office. One of the other factors involved was the support from the local government and in particular the Peniche Mayor at the time, Tó-Zé Correia or Tóze as every one called him. I doubt you could find an elected official anywhere in the world who was more supportive of pro surfing than Tóze.

Rip Curl had set up The Search CT's to be a one off event moving from country to country each year. In 2010 they had earmarked Puerto Rico as a Search location and I'm doubtful that even after the success of the 2009 event in Portugal they had planned to run a contest at Supertubos again. There was a lot of behind the scenes manoeuvring and I'm positive that the Mayor had a lot to do with it along with the ASP who needed another event in Europe and Tourism Portugal. The push was so strong that the contest is still running today as a Rip Curl Pro with the sponsorship backing of Tourist bodies and Portuguese Telecom companies.

Tóze was at the events every single day, he hosted dinners and functions at night and was behind a dedicated school of surfing built just as you approach Supertubos with rooms named after professional surfers. He was also passionate about the environment leading a number of drives to keep the ocean and beaches clean. At the 2019 event, Tóze was presented with an Award by the WSL to recognise his dedication to pro surfing. I realise this report is all about the Women's side of the 2010 Rip Curl Pro Portugal but I can't mention this Event without writing about Andy Irons. This event marked the last time he ever pulled on a contest jersey and I'd like to say that he ripped his heat in true Irons fashion but he lost to Australian goofy footer Kia Otten. The heat was run in small 2' plus low tide Supertubos. Probably close to bottom of the tide in fact and it was all lefts, with the majority of them close outs. I'd walked down to the waters edge to get a few shots of Andy before he paddled out and he actually said to me "… Joli what are you doing here?" And I answered that if he was going to be surfing a heat then I was going to shoot it. I have 5 images of Andy from this heat, three of him getting ready on the sand and two in the water. This was his very last heat and the three images on the sand are poignant reminder of his last heat. This event was the last time the late, great Andy Irons pulled on a contest jersey - WSL

World Titles on the Line

Stephanie Gilmore and Sally Fitzgibbons came into the Rip Curl Pro hunting a Women's World Title and it was interesting going back through the images from this event and see the number of World Champions competing. Steph had three to her name at this stage with Chelsea Georgeson and Sofia Mulanovich in the event also with titles against their names. Steph won a fourth World Title three weeks later in Puerto Rico. What makes it interesting is that for the next decade just two names dominated women's surfing, Gilmore and Carissa Moore. It feels like 2010 was a ‘changing of the guard' moment. Carissa was the Rookie of The Year in 2010 and has four Titles now while Steph has added another three. Only Tyler Wright has broken up that domination with two Titles in 2016-17.

Oh and the other World Title on the line at this event was Kelly Slater's attempt for a 10th in Portugal; He was aiming for a 10th win in the 10th month of the year 2010. Kelly did win the event but Jordy Smith, his rival for the title, finished 2nd pushing the showdown to Puerto Rico where Kelly sowed it up in the eleventh month of the year. The first time Mrs Joli and I saw Supertubos was in 1989 and it cemented it's place in my mind as one of the best beach breaks in the world straight away. We spent three weeks in Peniche and watched Supertubos firing barrels right through all the tides. At low tide you could see the scalloped sand banks that provided the tubes and look right through the barrels to the other side. Adding to the magic of the small fishing village was the incredible seafood. At night we walked the cobble-stoned streets choosing seafood from the day's catch out of a wooden crate on the footpath, watching it cooked on a open charcoal grill and enjoying a Portuguese red wine at the small tables set up in front of the Restaurant on the footpath.

We must have left a good impression at our favourite Restaurant because when we returned to Peniche for The Search event in 2009, the Proprietor was still running the Restaurant and remembered us. Unfortunately the EU had brought in health regulations about seafood on the footpath so now they had big square refrigeration showcasing the day's catch to pick from. Fortunately the charm remained with the fish cooked on an open flaming grill and was as delicious as we remembered.

The town has become a major fishing port with a mix of larger boats and the traditional boats leaving the Harbour each day. It still has the old world feel especially with the cobble stone streets, old stone wall surrounding the centre of the town and the Fortaleza of Peniche constructed in 1557 and 1558.

Supertubos still lives up to its name as one of the best beach breaks in the world. The quintessential wave at Supertubos - WSL