Repeat after me: "Sports are entertainment."

Let's close our eyes, take a breath, and accept that professional surfing (not the all-holy grail of soulful free surfing, In Turtle's name, not that!) is a sport. By extension, it is entertainment. And entertainment is arguably America's greatest export. Drama. Pain. Fear. Revenge. Hero's journeys. America is great at entertainment. And, now, with the newly announced vision of the WSL Championship Tour, professional surfing has a fighting chance to be great at it, too.

And nowhere does that manifest itself more effectively than The WSL Finals: surfing's version of March Madness. With the paint still drying on the announcement, it's a great development. Just what we needed. That and a vaccine for Coronavirus.

Whenever global health standards allow a tour to resume (fingers crossed the skies clear in 2021), its next iteration will be very different from the 44 years prior. There are no throwaway events. There's a midseason cut, which creates a critical plot point where none previously existed. But the most radical adjustment is the crowning of a world champion via The WSL Finals.

Only the top five ranked men and women qualify to compete in said finals. The number-one ranked surfer receives a berth straight into the best-of-three finale. The remaining surfers enter the bracket by rank. Five faces off against four. The winner battles number three. The winner of that heat battles number two. And that winner enters the best of three World Championship bout. A battle royale, if you will. For the visually inclined, this is much easier to digest: 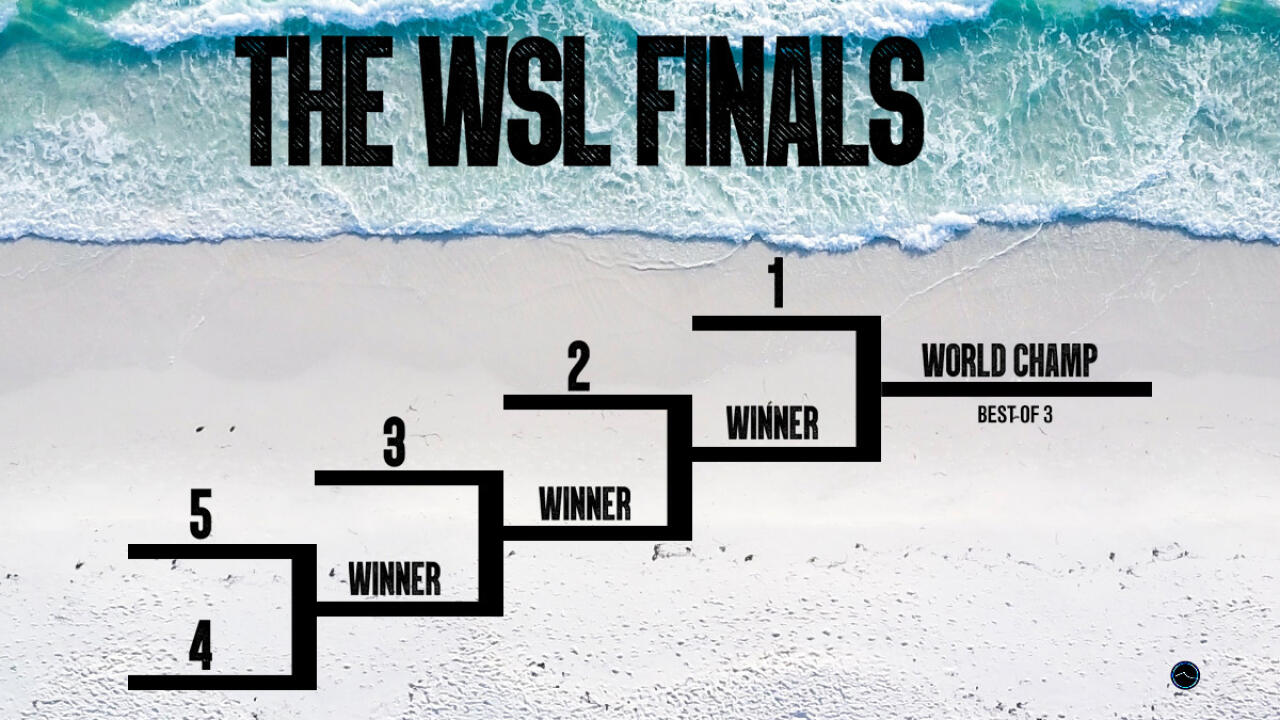 To put it bluntly, this format makes the arc of pro surfing highly compelling. On the final day, it's do or die. All killer, no filler. As it should be. Anyone can tune in and immediately care. The same way that humans who have never thrown a punch in their life tune into a UFC title card fight, and they're in the game. It's not like watching the fifth sequel to a series of sci-fi films with a hard-to-follow plot. The premise needs no explanation. The DNA of the scenario is drama.

Beyond that, because the field is narrowed, viewers can develop more empathy for the last five standing through focused character development and storytelling during the broadcast. We should know why a world championship matters to the top five - in highly specific terms - in a way that we previously didn't understand. That matters more than any athletic performance could. Fans will have ideologies and personal journeys to identify with and support.

While placing the number-one ranked surfer directly into the finals feels generous, I understand the desire to handsomely reward the best performer of the season, given the WSL's historical emphasis on consistent performance. The finals berth also introduces some weighty competitive psychology into the arena, too. The number-one ranked surfer enters the day as the villain. Picture [insert talented pro surfer], pampered like royalty, watching the underlings fight tooth and nail for the opportunity to unseat him in a best-of-three final. Each athlete will handle that situation very differently. Some will recoil under fire while others confidently assert themselves. In between heats at the 2019 Billabong Pipe Masters. - WSL / Ed Sloane

The strongest detractors to this system will most likely cite the old format's disproportionate emphasis on stringing together the best performance over a full season of events. The new format acknowledges consistency appropriately. In fact, the biggest upset available is number five overtaking number one. That's not really an upset. If Kansas beats Duke in the NCAA final, the earth hasn't been shattered. Beyond that, the old format allowed the world champion to clinch the world title well before the year's concluding event.

That is one way to do it. But it's wrong.

The old format never embraced entertainment the way sports should. We'll look back and wonder how we fell asleep at the wheel - willingly watching months of competition when we all knew the ending halfway through.

That's why you play sports. When the whistle blows, it's on. Each competitor has everything to gain or lose. There's no room for complacency or resting on laurels. That's how champions should be crowned.

Shakespeare laid it out for us quite nicely in five tried and true acts, and in 2021, a trove of Shakesperean narratives live alongside the new format. Break out the popcorn. When competition resumes, it's going to be more compelling than ever before.