Editor's Note: Welcome to our new series, Ride This, where we look at innovations in the world of surfing and beyond that changed the pursuit forever. In this edition, Sam George looks at the fin box, where it came from, and how it's become an intricate part of surfboard design and wave -riding progression.

A slot or plug that in the surfboard manufacturing process is laminated flush to the bottom section of the tail into which fins of various designs can easily be inserted and removed.

Where'd it Come From?

The history of the fin box begins, like so many other surfboard innovations, with the late George Downing of Hawaii. The youngest member of a crew of hardy big wave pioneers experimenting with the narrow-tailed, finless "Hot Curl" boards back in the 1940s, Downing was relentless in his press for greater performance. This led to the creation of the first modern big wave surfboard, a remarkably sophisticated balsa-wood pintail he shaped in 1951, dubbing it "The Rocket." 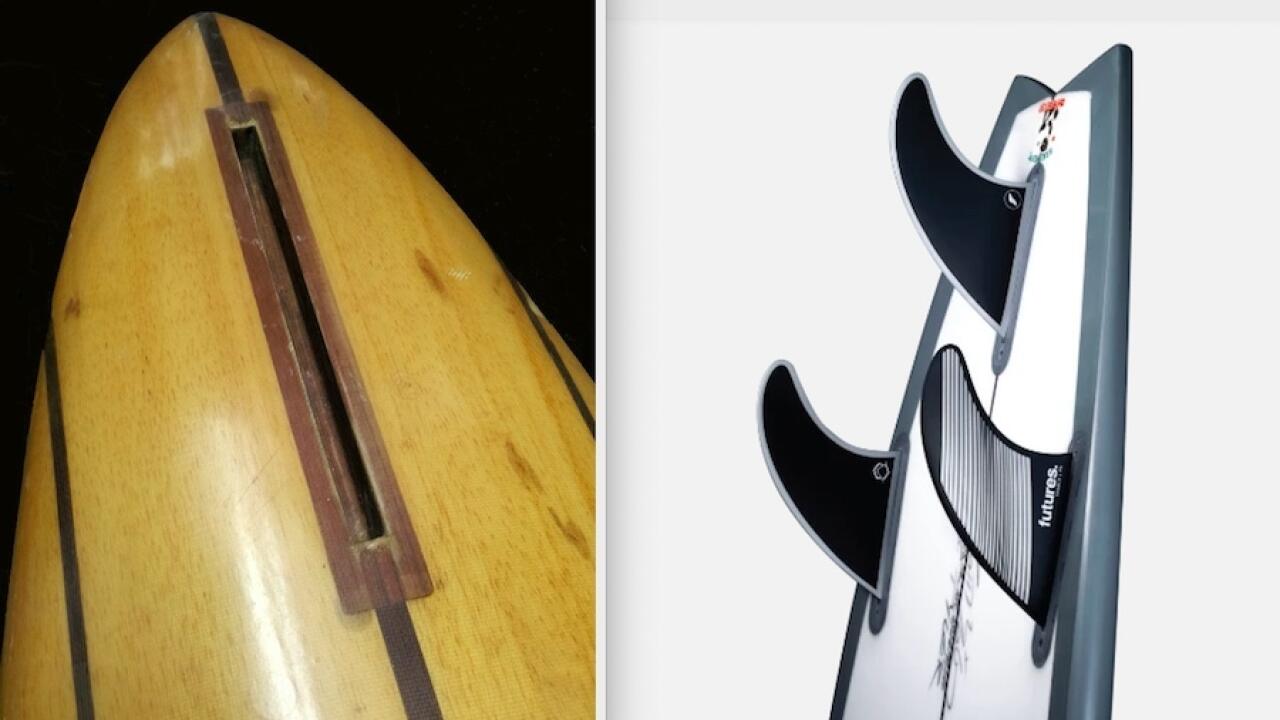 In terms of template and foil The Rocket was at least 30 years ahead of its time, yet the design leap most quantum was the inlaid wooden slot into which a fin could be wedged, allowing Downing for the first time to experiment with various shapes and positions. Ironically, this innovation ultimately slowed the development of the fin box: once Downing found the optimum positioning, and having by then adopted the use of fiberglass, he began glassing the fins on, pointing to increased torque against the base.

This obvious advancement preceded the use of deeper fins, which, in turn, resulted in greater maneuverability, which is why surfboard fins remained fixed and immovable for over a decade. In fact, it wasn't until the mid-1960s that major surfboard manufacturers started taking another look at fin boxes and the benefits they offered. Though by then both Hobie and Weber brands offered models with slot-and-screw-in boxes, the first board-builder to go all-in was the ever-inventive Tom Morey, who in 1967 introduced his W.A.V.E. System (Water Apparatus Vehicular Engineering).

Morey's double-screw-down W.A.V.E. box accommodated a broad variety of fins, including George Greenough's game-changing, high aspect "speed skeg", and the system was soon in use by most major manufacturers. At the same time San Diego's Bill Bahne, another surfer with an engineering background, was busy patenting his "adjustable surfboard fin holder", the result being the classic black Fins Unlimited slot-and-screw tab box that has been in ubiquitous use since the early 1970s-virtually every longboard and midsize today still utilizes this design. Oddly enough, even with the development of multi-fin boards throughout the 1970s and 1980s, fin box innovation and use languished until the mid-1990s, when Australian Brian Whitty introduced his Fin Control System, featuring lightweight plastic plugs set flush to the bottom of the board, into which tabbed fin designs could be screwed. FCS plugs, along with the Futures slot system developed soon after by Huntington Beach's Vince Longo, quickly became the manufacturing standard and today one or the other can be found on the bottom of every major surfboard brand.

What It's Meant for Surfing

Since the end of the balsa era in 1960, almost every significant advance in surfboard performance has been led by a change in fin configuration. And until the acceptance and wide use of the fin box, there was no way to change that fin, save to grind it down - or off completely - and start over. The fin box, in facilitating efficient experimentation with various fin designs, has not only fostered innovation, but remains the only way to modify the performance qualities of a surfboard once it's been glassed. Not to mention easier board-bag packing when on surf trips. The range of surfboard designs currently available has never been more diverse, and considering choices that include pro-model thrusters, step-up quads, retro twins, mid-sizes, logs, hi-pro longboards, single-fins and fish, the focus on fins has never been greater. Every one of those fins- from the coolest custom longboard laminate to the latest carbon-fiber pro foil - is going to fit into a box. So while templates, rockers, foils, contours and materials may continue to evolve, the simple, uncomplicated fin box, in concept not that much different than Downing's original wooden slot, is obviously here to stay.