The Boost Mobile Pro Gold Coast will be soon heading to South Stradbroke Island. The specialty event has a two month waiting period to score the best possible conditions. However why should just the world's best surfers get all the good intel on the beachbreak located just north of Surfers Paradise? So here's a rundown on how to score the best waves and the best times at the place known as "Straddie".

Getting There
Located on the edge of the Gold Coast, the waves of South Stradbroke Island lie just 17 miles from the domestically serviced Coolangatta Airport and 40 miles from Brisbane International Airport (BNE). However the primary obstacle in accessing the Island's best waves, and source of South Straddie's unique, untouched atmosphere, is the 250 metre wide stretch of water known as the Southport Seaway.

Surfers can either paddle across the channel, made longer by both tidal currents and the possibility of sharks. Or catch one of the many water taxis that operate from Southport or Runaway Bay. These taxis run on the days the waves are fun, leaving as early as 6am and drop you out the back of the surf zone.

Of course having your own jet ski or speed boat (or a friend that does) is an ever better option, though charter boats can be hired for the day. A ferry also runs from Marina Cove, but only to the leeward northern side of the Island. 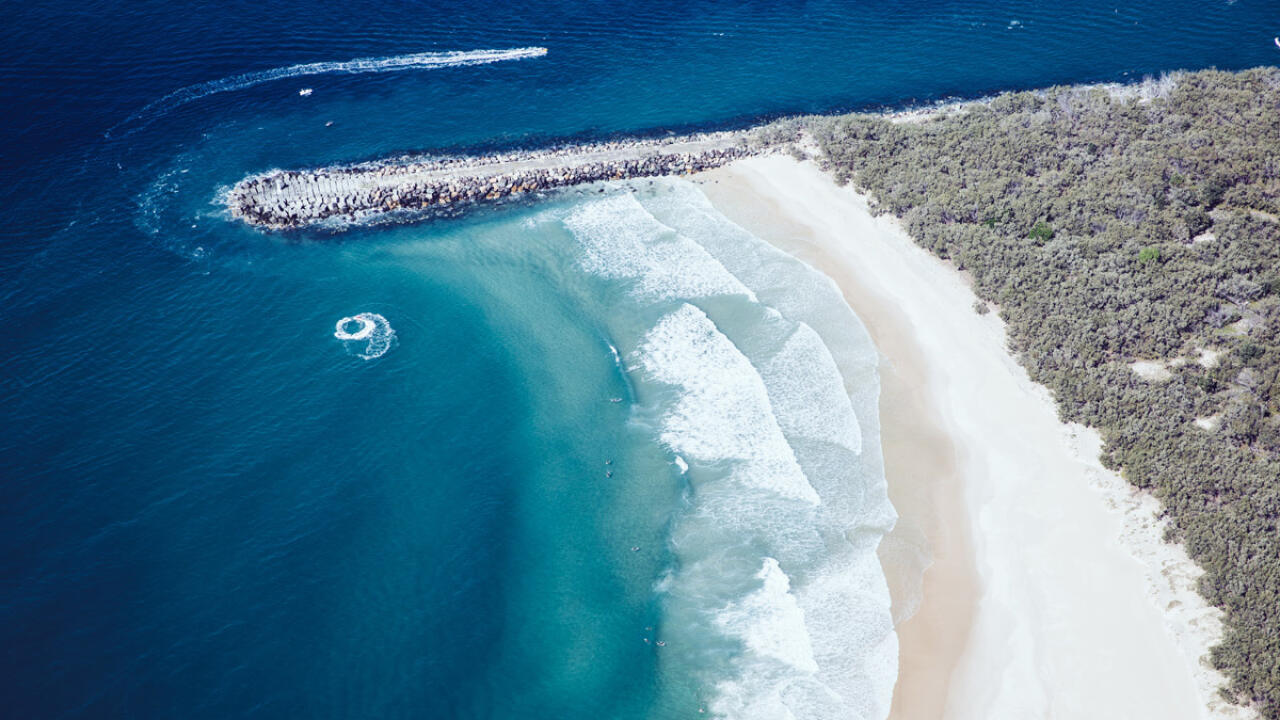 Scoring There
The location and unique bathymetry means that the break hoovers in both local windswells and distant groundswells. When the swell isn't quite big enough for the points the outer sand banks will amplify the available swell, then break them up into wedging morsels on the packed inside section.

However it is not so much the swell, which in the prime season from March to June tends to be consistent, but that wind that adds a level of trickery to scoring perfect Straddie. Facing east, the break needs offshore westerly winds to produce its famed spitting barrels.

Every surfer that has spent time here has paddled across the Seaway, only to feel the dreaded puff of the northeast onshore breeze, and had a session derailed. On the plus side, early mornings often feature those required land breezes, and in winter especially often a west wind can blow all day, providing endless magic.

Staying There
South Stradbroke's appeal lies in that it very much untouched. With no towns or villages, it's possible to stay at one of the three beautiful council run camping grounds at Tipplers, North and South Currigee. Couran Cove Resort is a newer, marina based resort that offers family friendly, upmarket accommodation.

However as none are located within an easy walk of the main breaks and with cars not allowed on the island, having a boat is essential. For that reason, Straddie is tends to be a day trip for surfers. Those with access to jet skis and boats usually pack a picnic and plenty of water, anchor on the beach, and scoff down fuel in between surf sessions.

Not Surfing There
The waves may be world class, and soon home to the Boost Mobile Gold Coast Pro, but South Stradbroke offers plenty for the non surfer too. There's an incredible diverse amount of native wildlife among its 1800-hectare conservation park, and the island is known for the hiking, rock climbing and ocean fishing.

Whale spotting too is a regular occurrence on the 15 miles of open beaches, while the inland waterways and lee-side bay are perfect for kayaking and SUP. Also Tipplers Cafe, near the campsite, offers delicious food and cold beverages.