My first trip to Réunion Island was in 1989. It was with the Quiksilver crew of Ross Clarke-Jones, Dave Macaulay and Jamie Brisick. We had been invited to the island by Cyril Thevenau, who owned the local surf shop. Cyril was a Quiksilver distributor with a small sponsored team, including Jeremy Flores' dad, Patrick, and Etienne Vidot, who became our local surf guide on this trip. In my position as Marketing Manager for Quiksilver Australia, Cyril had been asking me to come and bring some surfers for a number of years to experience the incredible beauty of the island and its culture and hospitality -- not to mention the waves. It all came together in '89.

We slept on the floor at Cyril's house above St. Leu. Etienne was our official surf guide, who helped us score waves all around the island with really good sessions at St. Pierre, Trois Bassins and St. Leu. We've remained a lifelong friends to this day. My schoolboy French helped out a bit, but there were lots of funny Pink Panther Inspector Clouseau moments. Ross Clarke-Jones, suffering from insomnia, would borrow the hire car at night to drive a complete circuit, or two, around the island.

In 2005, I had the opportunity to go back to Réunion to document the inaugural Rip Curl Search event. The following are a handful of images from that trip and some of my favorite memories:

Where Should I Go? 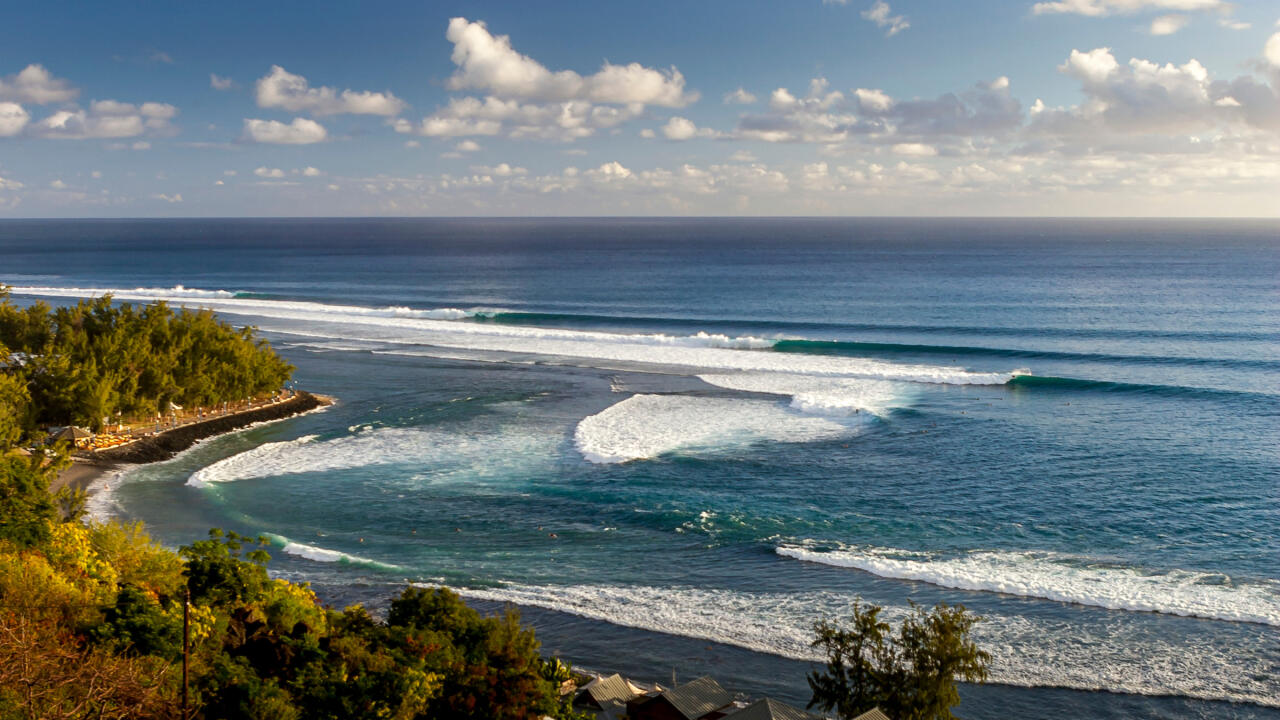 I've been traveling the world, primarily around the incredible surfing locations, for the past few decades and I often get asked by surfers, "What's your most favorite place?"

Or they'll ask, "Where should I go for a surf trip?"

After visiting Réunion Island in the '80s and '90s, this was one that was at the top of my list for a number of reasons. The island is sub-tropical with warm water that rarely gets below 23C all year. It's blessed with good surf and relatively uncrowded lineups. There was inexpensive accommodations around the main surf breaks, and an exciting mix of French and Creole lifestyle. And the food!

There was also the spectacular scenery around the island with mountains, forests, waterfalls, and to top it off, one of the most active volcanoes in the world. Reportedly more than 500,000 years old, it bubbles and gurgles most days and occasionally gets a bit more active. The drive up from the ocean through the clouds to the volcano is breathtaking.

Unfortunately, over the past decade the creatures of the sea around the island gained more attention. On my first trip, the local surfers knew which spots to give a miss, mainly on the east side where the rivers ran into the ocean, but over time that changed with shark attacks, predominantly from Bull Sharks spread all around the island to the extent that the government, unsure of just how to deal with the situation and keep the population safe, banned surfing completely. The frequency of attacks has diminished, but from what I understand, surfing is still officially banned. Of course, it's hard to keep surfers out of the lineup, especially when the surf is firing. A lot of the locals are employing various sorts of shark repellent devices when they hit the water. A "floating license" sounds like a funny term for a surfing event, but that's what the Association of Surfing Professionals (ASP) had granted Rip Curl to run World Championship Tour (WCT) events around the planet. The floating term came from the fluidity of time and place. It was described by the ASP as "globally mobile" and was first added to the WCT schedule in 2005. From Rip Curl's perspective it dove-tailed into their marketing philosophy of The Search.

The Search events were planned to be one-off contests at different locations and scheduled around the best time of the year for that particular spot. While Réunion Island had been a CT stop in the '90s, it had dropped off the Tour schedule for a number of years. When Rip Curl announced it as their first Search destination it had more than a few people asking, "Where is Réunion Island."

If I was asked, my answer was roughly, "It's a dot out in the Indian Ocean sandwiched between Mauritius and Madagascar and it gets pumping surf ."

"It's all about finding the best waves in the spirit of The Search, which is all about discovery and freedom," explained Rip Curl's Chief Brand and Marketing Officer Neil Ridgeway. "That might seem at odds with professional surfing, but no one can tell me the world's best surfers are not on the ASP World Tour. It's (that) simple -- the best surfers on the search for the best waves, surfing their heads off!" With a waiting period from June 24 through July 4, a lot of the crew for the Rip Curl Pro turned up in Réunion Island early.  A French territory there are direct flights from Paris, but for visitors/surfers coming from other parts of the world it isn't as easy or as straightforward to get there. Andy Irons was quoted at the time saying that Reunion was virtually the furthest place away from Hawaii. For Australians, especially those from the East Coast, it took three flights to get to Réunion: a domestic flight across Oz, a long haul to Mauritius, then another flight to Réunion.

Looking back, there were pluses to arriving early. One was a solid six-foot swell hitting the contest site at St. Leu. Another was having surfers like Andy, Cory Lopez and Tom Curren out surfing the clean Indian Ocean ground swell.

As this swell dropped there were two days of intense free surfing further down the coast at the small town of St. Pierre. The Rip Curl team had arrived on the island by this stage and guys like Mick and a very young Matty Wilkinson joined Hawaiians Fred Patacchia and Andy ripping apart the rights.

A Tale of Two Heats There were a number of classic heats during the running of the The Search, but two jump straight to the top of the list. Andy Irons was reigning World Champ coming into this contest and he'd been on the island for over a week before it kicked off. His free surfing was incredible. Going back through images from this trip, Andy was the standout, hands down. On his backhand at St. Leu in solid six-foot or at St. Pierre on his forehand, he even took on a heavy local slab that's rarely surfed.

It could have been overconfidence, I'm not sure, but in his heat against Peterson Rosa he let his guard down and Peterson charged the end bowl at St. Leu with his trademark long, drawn out, stiff-legged floaters. The judges loved it.  He got a jump on Andy, who then pushed too hard with crazy under the lip snaps that didn't quite come off and he was knocked out of the comp.

The other heat was Kelly Slater up against Darren O'Rafferty. Asimilar thing happened. Kelly had won the previous two events in Fiji and Tahiti. O'Rafferty was definitely the underdog. In front of his Rip Curl sponsors he picked off a solid set wave right at the start of the heat and ripped it, especially through the bowl section where the wave really stands up. He was give a nine-plus for it.

Kelly fought back with a couple of good waves, but couldn't match the near-perfect score that O'Rafferty had posted. Two of the top seeds had been knocked out. Their reactions could not have been more different. Kelly was philosophical about his loss while Andy exploded at a journalist who asked him how he felt about losing to Rosa. It was a pretty expletive-riddled response and the journalist complained to the ASP, who in turn fined Irons $1,000 or something like that. Kelly was obviously disappointed, but was still happy with his current form, which led him to a win at the next CT stop at J-Bay. In 2005, Occy was still on the World Tour but he'd claimed it was going to be his last year. Tom Curren had been his big rival back in the early '80s with some heats that are still talked about today as some of the best in professional surfing.

Their rivalry during the ‘80s was being matched in 2005 by Kelly and Andy and it inspired the Heritage Heats that were later run at Bells Beach and J-Bay just a couple of years ago. At the opening ceremony of the The Search event Curren and Occy were both at the press conference; Occy as a World Tour competitor and Tom Curren as a Rip Curl wildcard. It would have been a classic marketing exercise if the pair had ended up surfing against each other in the contest. Unfortunately, it didn't happen with both guys getting knocked out early. I had to be content shooting Tom free surfing St. Leu before the contest with his young sons, Pat and Frank. Mick Fanning's run through the contest was a bit mixed. He never really stood out until the last day when he clicked into gear. Guys like Nathan Hedge, Phil MacDonald, Jake Paterson, Cory Lopez, Trent Munro and Timmy Reyes all looked good at different times of the event. Munro had won at Bells earlier in the year. Lopez had Andy Irons as a traveling and training partner and was in fine form. Paterson, from the Margaret River region in Western Australia, was used to surfing the Indian Ocean power. And Hedgey, well, Hedgy was just being Hedgy and ripping these carving backhand cutbacks.

You would have thought that a long left-hander would have favored a goofy-footer, but the guys on their backhands were handling St. Leu better. The wave has a long wall section to begin before it bends around the reef and produces an inside bowl section, which can throw a short tube depending on the angle of the swell. During the comp it was more about turns than barrels. The guys on their backhand were the standouts, loving the end bowl section. Coming off the bottom and powering straight up before cracking the lip, it was pure backhand power surfing. The reef is actually live fire coral and I've seen a few kiss the bottom surfing St. Leu with scrapes and loss of skin, but that prospect was not effecting the level of "on edge" surfing witnessed during The Rip Curl Search Event. When I first visited Réunion you could set up camp among the trees on the point at St. Leu. I'm not sure that it was really a camping ground, but people set up their tents to hang out, play music and go surfing. In 2005, during the Rip Curl Pro Search contest, the park was like a festival marketplace with local handicrafts, food, alcohol and music. It was still the local hang with the predominate blend of afrobeat, reggae, rock and samba music filling the air played by the locals.

On the Final day of festivities and competition, Mick was on fire in the water. Taking his surfing to the next level, he completely dominated his heat against fellow Aussie Phil MacDonald. On the presentation stage the group of local female Creole dancers were dominating the dance moves with Mick enjoying ever minute of it. The musicians were beating out the traditional Maloya music and Tom Curren, also on stage, fitted right in with the performance keeping up a rhythm on the drums.