The time had come. The darkest hours of the morning were lit up by the moon, having reached its fullest phase, and the Earth had spun to the precise moment in the season designated by the kahuna ka uhi. Just after dawn, Ezekiel "Zeke" Lau hopped in his truck and headed out to the North Shore. It was early February and the Seven Mile Miracle was churning out barrel after barrel.

But the 26-year-old pro wasn't north-bound for a surf. Today would be dedicated to introspection and ceremony as he received his introductory uhi, or traditional hand-tap tattoo: an alaniho depicting his Hawaiian bloodline. A tremendous amount self reflection had built up to this moment in Lau's young life. "He asked me a little bit about my family and what's going on in my life and what my intentions were, why I'm coming to get the kakau, and we drank awa," he recalls of the several meetings he had with Kawika Au. 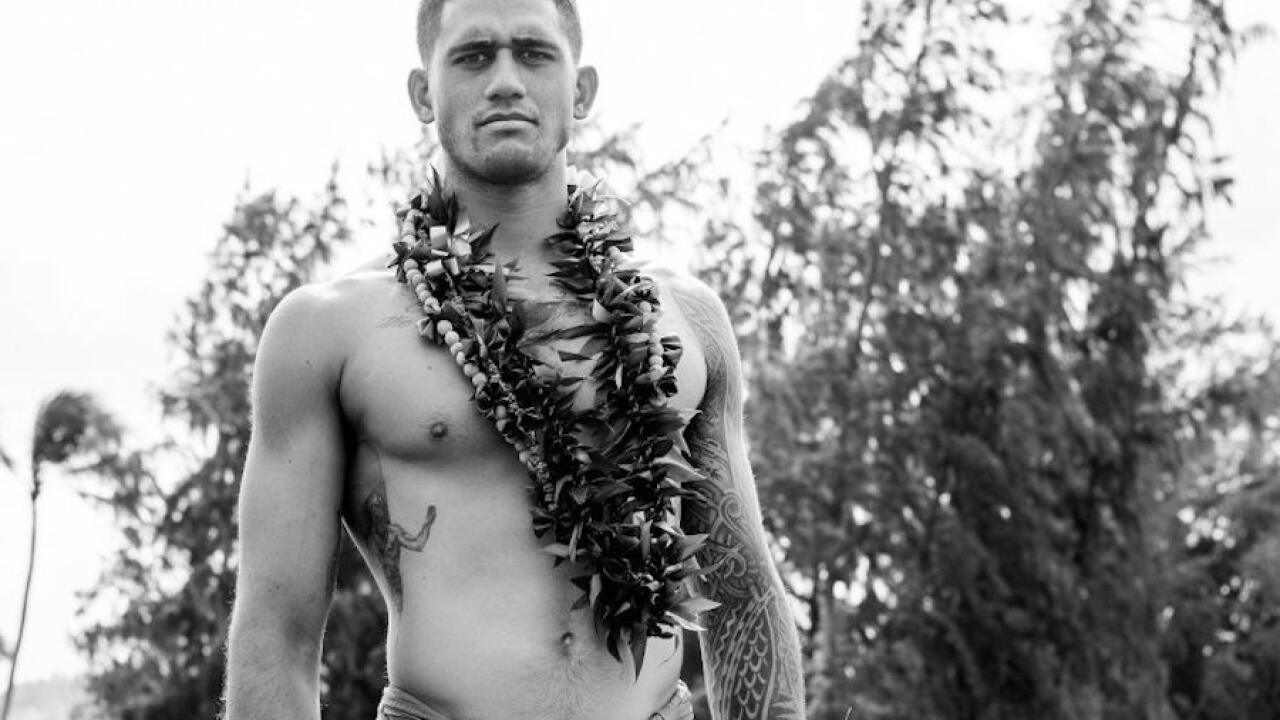 Zeke Lau is someone who values tradition and wears it proudly. He spent six hours receiving his traditional hand-tap tattoo. - Bosko/Quiksilver

Au is a Haleʻiwa-based practitioner, or Moʻo Kāne, who performs the traditional art of Hawaiian hand-tap tattooing. "He gathered as much information as he could from me in that conversation," Lau says. "That first day was just talking about the kakau and planning it out." Lau emphasizes a crucial component of kakau, or tattooing: "The biggest thing is the time of year that you get it. You can't just be like, ‘Oh, we can do it this weekend.'"

When it is your time, you go. And on that chilled morning in February, Lau's time had finally arrived. "Everything has a meaning and a purpose behind it. It's all based on the moons and the time of year that you can get this kakau because everything's so ceremonial," he explains. "They can only do it on certain moons because of the energy that goes into [the kahuna ka uhi], giving the kakau. It has to be on a certain moon, a certain night."

Traits specific to your position in the community and your profession - whether you are a farmer, or woodworker, for example, is taken into account. For Lau, the waterman's ocean-faring career contributed to his February 9 timing. "It's deeper than just getting a tattoo art design on your skin," says Lau, who spent three seasons on the CT and will presumably work to re-qualify. He's also decorated with modern-styled tattoos as well. But receiving an uhi in the manner of his ancestors held a drastically different sense of pride and responsibility. Lau recognized the significance this design would embody. "I went about it by myself because it was something that was really personal to me," he explains. "Every other tattoo I've gotten, my dad has always been there with me," he says, "But this just seemed a little more personal. I went on my own journey with it. It was something that I got to learn by myself and grow a little bit more and do more research on my family and my culture. Everything starts with your family."

He received the foundational genealogical tattoo on his left leg. The geometric pattern reaches from ankle to thigh. The design represents the tale of his family's migration, a lineage Lau discovered was traceable beyond the isle of Oʻahu, across the channel to Maui and traversing the remaining length of the island chain down to Hawaiʻi Island."The coolest part about getting these kakau is that it's never really up to you, what you get," he reflects. "It's all based on who you are as a person."

Even the positioning holds significance: "Different parts of the body and different sides of the body mean different things, so the left side is the leading side, the more dominant side," he notes. The intricate tattooing process uses a bone-and-ink tapping method that is worlds away from the needles used by late-night parlor artists. In kakau, the Moʻo Kāne, or practitioner, uses mōlī, or tools, piercing the skin with albatross bone, ʻūle, turtle shell, and ivory, laced with an ink made of kukui nut soot and other carbon-based natural inks known as paʻu. The Moʻo Kāne uses a pencil-sized wooden tool and hammers the ink-dipped bone into the flesh, leaving behind the patterned ink stain, or uhi.

"Hawaiians are really particular about how they feel when they're doing things and the energy that they're putting into it… You just go through the process slowly," Lau reflects thoughtfully. At 6'1", he towers over the majority of surfers on Tour. He endured six hours of kakau before his resulting leg-length uhi was complete.

"Six hours is a long time, but we were taking breaks in between and we'd drink awa and talk story," remembers Lau who was guided through the process by Au, who explained each image's representation as he tapped it into the skin.

"Working on a man like Zeke was amazing. He is a Hawaiian doing his best to live and thrive in the contemporary world as well as that of his ancestors. I mahalo him for the opportunity," says Au of his time spent with Lau. "It is an honor to do this work. To serve Kāne, to serve my community, and to be the conduit between them is a kuleana I do not take lightly."

Lau, having discovered so much about his culture and his family, looks forward to exploring the process further with additional uhi. "The journey that you go on to get these kakaus seems deeper than just getting a design on your body. They tell stories and have more meaning behind it," says the regular footer. He looks down to his left leg and sees more than a powerful lead: "I'm carrying my family with me. I have a story to tell. I feel really proud… It's something that I've always wanted to do and it's a way to carry my culture with me everywhere I go."