Women's surf history is fragmented. For too long its female pioneers have been under represented in a sport dominated by men. The surf world before a womens tour was influenced by male photographers, male editors, and male event organizers. But right in the cross roads, as professional surfing was just coming into existence, was Linda Davoli, a hard-charging pioneer of the sport. I got the chance to call up Davoli and talk to her about her surfing career:

Coming out of the dark ages of the '70s and into the pro era of the '80s, there was a group of tough-as-nails women surfing around the world, trying to stake their claim in the game. Davoli, being one of them, was not only a competitive surfer but an advocate for global events on tour for women.

While not that many people outside of the U.S. East Coast know her name today, what Davoli accomplished was groundbreaking. She competed in the debut of the Womens World Tour in 1977, and in 1980 while filming American Sportsman, she became the first woman to ever surf the infamous left-handed reef break of G-Land (the episode even won an Emmy). 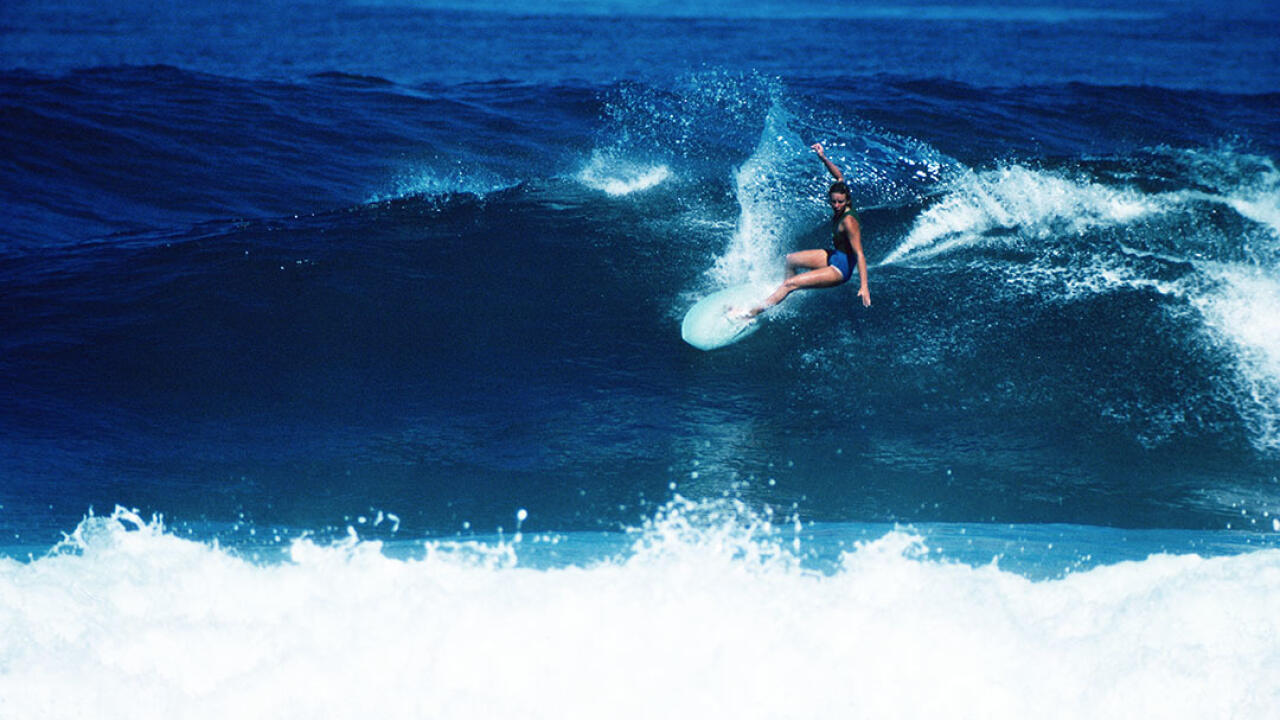 "It got so big that we were all the way over to the right in the channel. It was just peeling these giant perfect offshore waves," says Davoli about her experience surfing the Java reef break for the first time. "It was a really neat experience. Hearing the big cats roaring in the jungle at night. It was just something else."

Each day that they filmed, the waves continued to get better and better. After spending a month in Indonesia, Linda was surfing Uluwatu when she came in and meet the crew of American Sportsman: Gregory Harrison, who famously played Chandler in the cult classic North Shore and Rick Rasmussen, a talented goofy-footer from New York. They were impressed by her surfing abilities and asked her to join them as they filmed the episode. She decided to extend her trip and journeyed to Grajagan Bay, home of the iconic surf break. 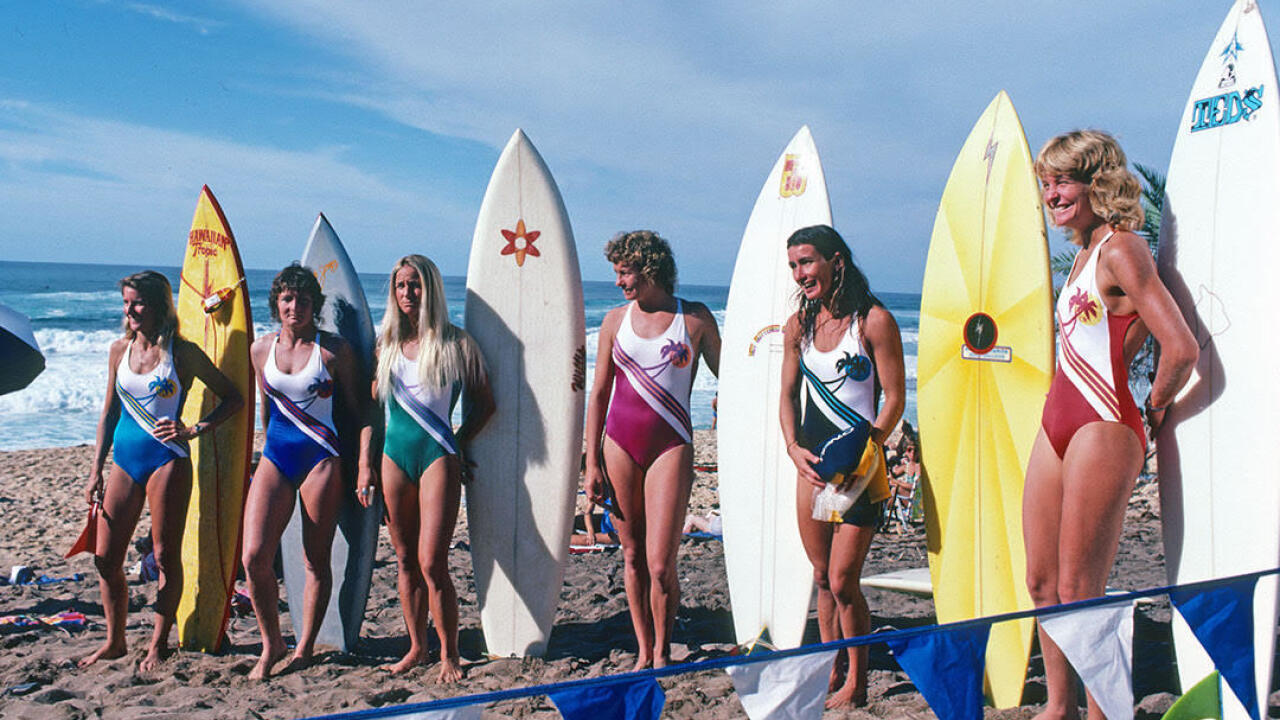 Davoli pictured fourth to the right with a magenta one piece, posing for a photo before jumping into the water to compete. - Jeff Divine

Davoli grew up in the small town of Brigantine, New Jersey with a love for ocean water sports. She would kneeboard on blow-up rafts with her friends and swim all day long on the scenic shores of the East Coast. One day while she was at the beach, her friend asked if she wanted to try surfing and pushed her into her first waves.

"I stood up all the way to the beach and that was it," Davoli explains about her experience back in 1967.

At the age of eleven, she fell in love with the sport of surfing and that was it. For Christmas she got a 9'6" used board. And in 1969 Davoli began competing in local surf competitions near her home. She won the girls' division of the East Coast Championships as well as qualified for the National Championships in California two years in a row. At the height of her competitive power, she was the first East Coast surfer to take home a National Title at the United States Surfing Championships. 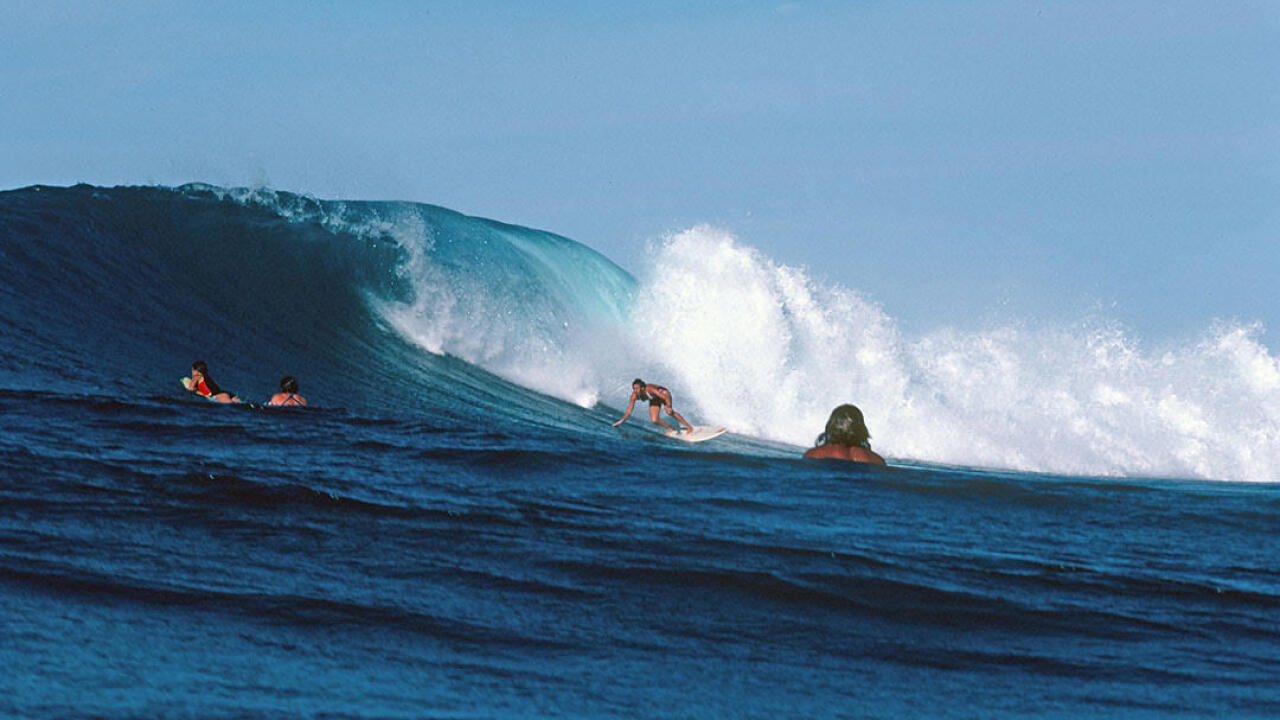 Davoli moved to Hawaii in 1975 and honed her skills with coaches and shapers. Pictured here the young East Coaster drops in on a huge right hander in Hawaii while her competitors watch. - Jeff Divine

From there, Davoli was thrust into the emerging pro surfing scene as one of the sole female representatives from the East Coast.

"It's gotten so big, we were the first ones, the tour started in 1977," she recalls. "There were only a handful of women's events. In order to get sponsored and keep your sponsors you had to compete against the boys. But now it's huge and I was so happy to hear the women are getting equal prize money. It was kind of a shame because I was sleeping on people's couches, living on peanut butter and jelly, it was always poor all the time and that's kinda the reason why I gave it up."

One of Davoli's career highlights included the 1980 OM Bali Pro where the young New Jersey star entered and competed against the men. There was no women's division, so Davoli went through the men's event, winning all three trials heats and gaining herself a spot in the main event.

"This was the very first man on women heat," Davoli testifies. 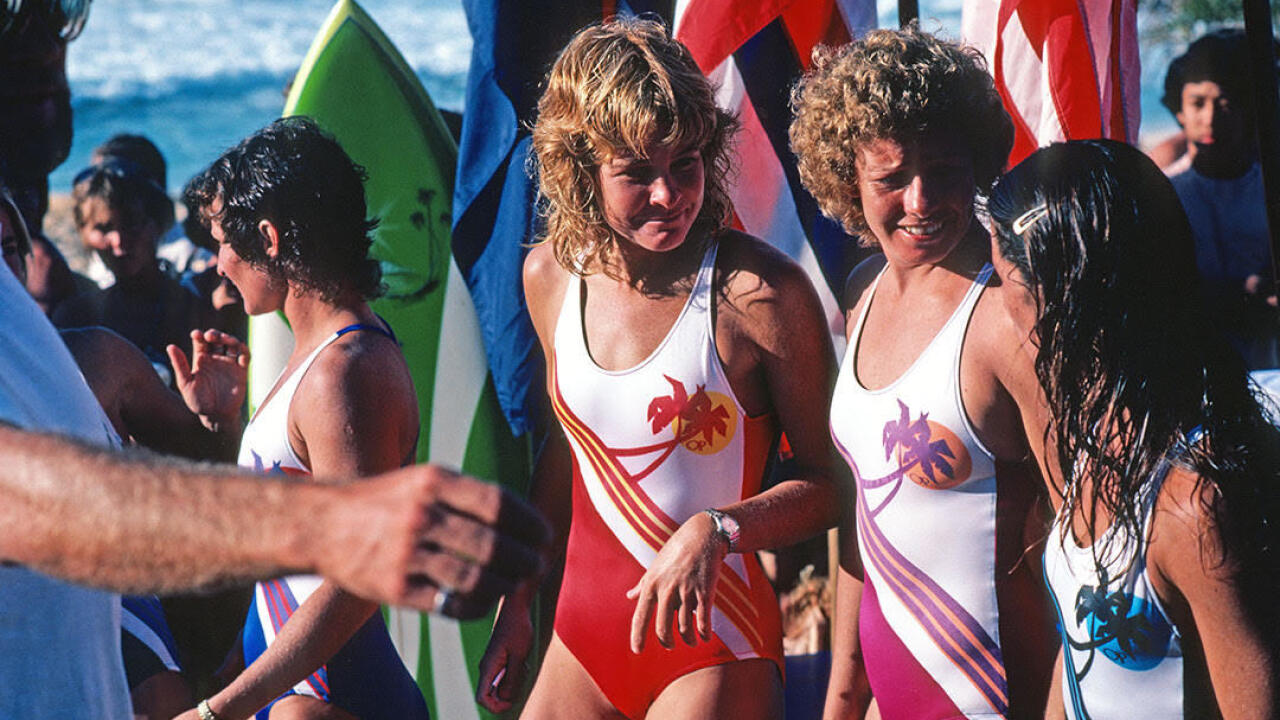 Linda Davoli was an advocate for womens events and participated in the inaguaral year of the womens tour in 1977. - Jeff Divine

Davoli's best result on the Womens World Tour is a third place finish in 1981. That year she won the event in Bells Beach. After the competition she went around Australia advocating for a women's event on the Gold Coast.

In 2002, Davoli was inducted into the East Coast Surf Legends Hall of Fame and will always be remembered for her contributions to women's surfing from the start. She was ahead of her time. She made waves as a pioneer. And she helped create the Tour that we love to watch today.