The pandemic has turned the world on its head. Unless you're entirely self-sufficient and live alone on an island with no contact with the outside world, you've been affected. Nearly every industry has been hit hard by the Coronavirus, shelter-in-place orders have been put in place, jobs lost, plans squashed, and worst of all, a death toll that, as of this writing, is tickling the feet of a million people. You, like many others, may feel stranded; stuck in your own home, scrolling until you've hit the end of the internet, making pies, baking bread, downloading Tiktok. Life in quarantine is a strange way to live. But what if you could be stuck in paradise? An island paradise with perfect waves and no one out?

Some, of course, are lucky enough to call an island paradise home. Others were able to experience the most incredible surf trip you could possibly imagine simply because they chose to be stranded.

About 15 years ago, Ray Wilcoxen, known by many as All Day Ray, moved to the Mentawais. He started going there in the early 2000s, but the place sucked him in. Now, he's the manager of Kandui Resort, living full time on the island with his wife and four of the luckiest children in the world. While empty, perfect waves are indeed a silver lining, it's a thin one. "It's hit everyone very hard financially," Wilcoxen said. "The Mentawais were closed for months and most resorts were not operating." 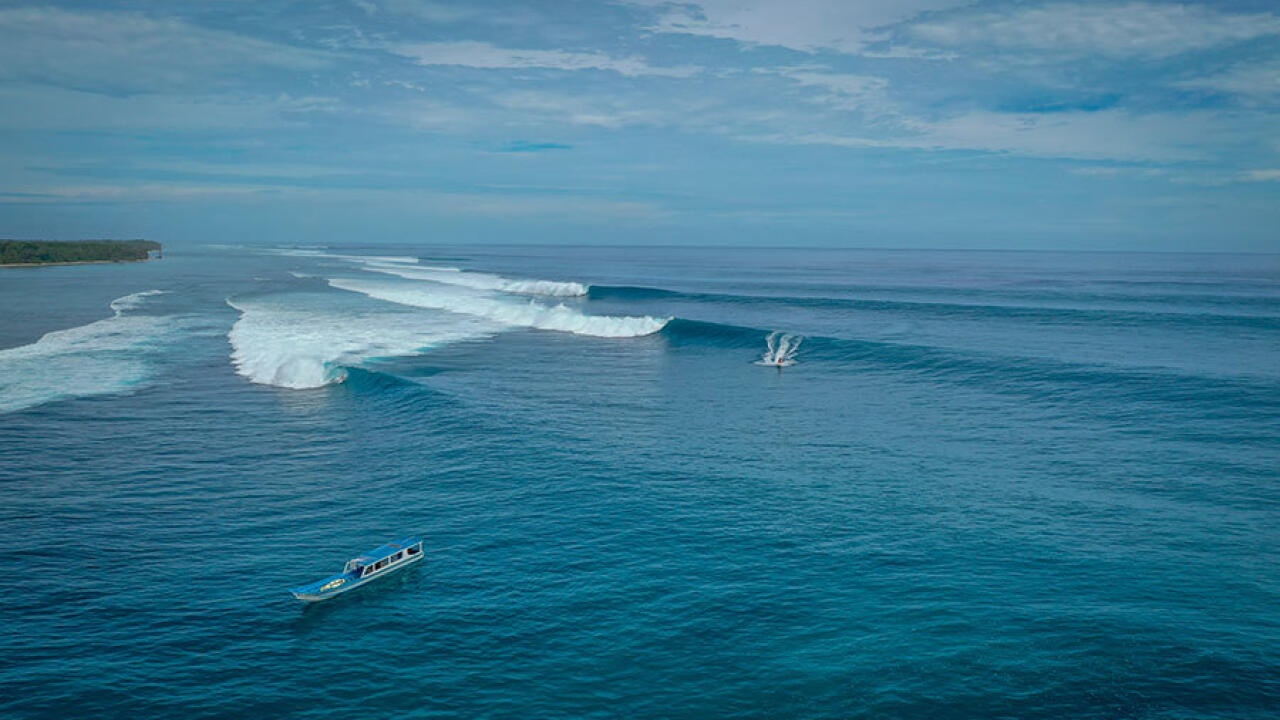 Surfing in the Mentawais. While the lining is silver, it's still very thin. - Justis St. John/Kandui Resort

Right now, things have eased a bit. While the Mentawais are open again, it's not exactly easy to get there. According to Wilcoxen, Indonesia isn't offering visas, so tourism has plummeted. Kandui, though, managed to keep its doors open by offering heavily discounted rates to people already in Indonesia. Kandui Resort is one of the largest employers in the area, so that's been extraordinarily important for the local community. "Hopefully, we can continue to get a few guests and keep this ball rolling until Indonesia decides to start issuing visas on arrival," Wilcoxen continued. "Our immigration agents have also found a way for tourists to enter the country safely with an approved visa. The general public can reach out to our booking manager at contact@kanduiresort.com for all the details."

Back in February, when COVID-19 was just a whisper in the news, the resort was full. But come March, when that whisper became a deafening roar, all the guests packed their bags and ran for home - all but two, that is: Anthony Fillingim, a professional surfer from Costa Rica and a Polish guest named Tomek Niewiadomski.

"Anthony and Tomek stayed for the long haul with no idea when they would be able to leave Indonesia," Wilcoxen explained, "but are now back home after sticking it out for the last five months with us."

Right now, travel within and to Indonesia is possible, but there are understandably more than a few hoops to jump through. Domestically, something called a negative rapid antibody test result that is no more than 14 days old is required. Travelers must also show no symptoms of the virus, like a fever or dry cough. Those tests, however, have come under fire in recent weeks. Dicky Budiman, an epidemiologist who has worked on Indonesia's pandemic response, believes they're likely responsible for an uptick in cases in Bali. "Rapid antibody test kits do not detect current infections," he told Aljazeera. "They only detect if a person has been infected within a few weeks or months ago. If you test positive, you could have caught a different coronavirus from your dog. For this reason, Australia, England, and India all stopped using them, because they are not accurate."

Coming from outside of Indonesia is even harder. "You need to apply with our immigration agents for a pre-approved visa and you need a negative PCR test before you enter the country," Wilconxen explained. "The visa cost is $1,1100 U.S. per person and the turnaround time in Indonesia is 2-5 business days for the Telex (approval document for your passport to be stamped with the visa). Once you receive the Telex, you need to take it to the Indonesian Embassy in your country for them to stamp your passport with your visa. That process varies from country to country but typically is 2-5 business days." 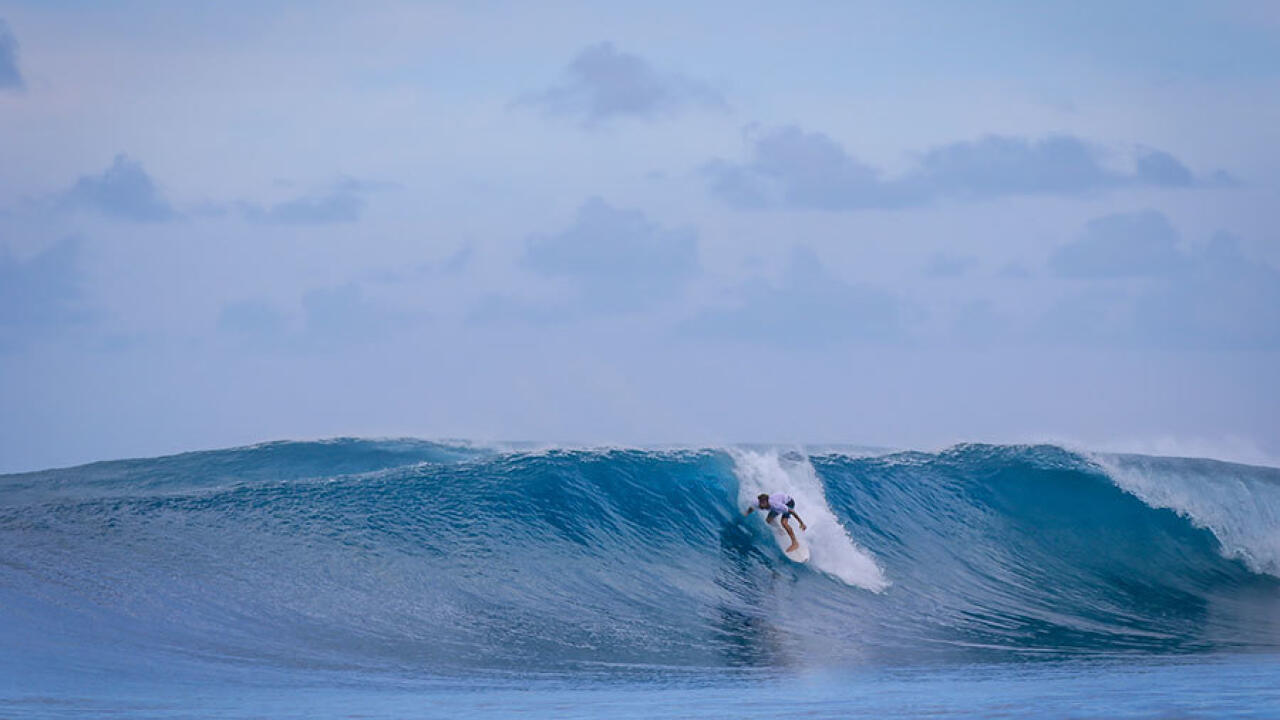 It wasn't the easiest decision to stay, but Fillingim's glad he did. - Justis St. John/Kandui Resort

Still, six guests are currently staying at Kandui and the first guests with pre-approved visas from Indonesia will be arriving soon. "Things are slowly starting to feel somewhat normal, but Indonesia has done a very good job opening back up their economy slowly and as safely as possible," said Wilcoxen. "There's a massive amount of swell heading towards Indonesia and our Umas are slowly starting to fill up."

Anthony Fillingim and Tomek Niewiadomski have already squeezed all the juice from a situation that will - hopefully, at least - never happen again. The season in Indonesia has been an especially good one for surfers stranded there, and not just because the lineups have cleared. Judging from the videos, Fillingim took full advantage of the situation.

Just before the pandemic hit, Fillingim decided to take some time off from the contest circuit. "I had an original plan to come out and stay with a couple of friends at Kandui Resort in early March," he said. "I decided to take a break from competing this year and was planning on spending around a month in the Mentawais and then a couple of months in Indo just surfing and shooting."

Wilcoxen had contacted Fillingim to create a little video project that focussed on the kinds of waves that early-season Indo offers, and Fillingim jumped at the chance. In a staggeringly short amount of time, though, everything changed. "I arrived on the island and within 24 hours, the Indonesian Government announced the border was closing and Costa Rica was asking its citizens to return home ASAP," he remembered. "It seems like an easy decision to stay but I'm close with my family back home. After talking with my family and also Ray, I decided to stay on with no idea when I would be able to leave Indonesia."

Despite the fact that staying felt like an easy decision, Fillingim soon began to realize that this trip would be different, to say the least. In that uncertain time, it was impossible to see what the future held. "In the beginning," he explained, "I didn't think much about the waves since all I thought was I wasn't going to be able to leave Indonesia for a long time. But after a couple of sessions and the entire area just vanishing in a week, it started hitting me what was about to happen."

Now, safely back home in Santa Teresa, Costa Rica, with a surf trip that probably won't ever be topped, Fillingim is happy with his decision and eternally grateful to the people who made it possible. "Ray and Kandui Resort were incredible and it turned out to be the best time of my life," he said. "It became the trip of my life and I'm thankful to the universe and life for having me there at that moment."