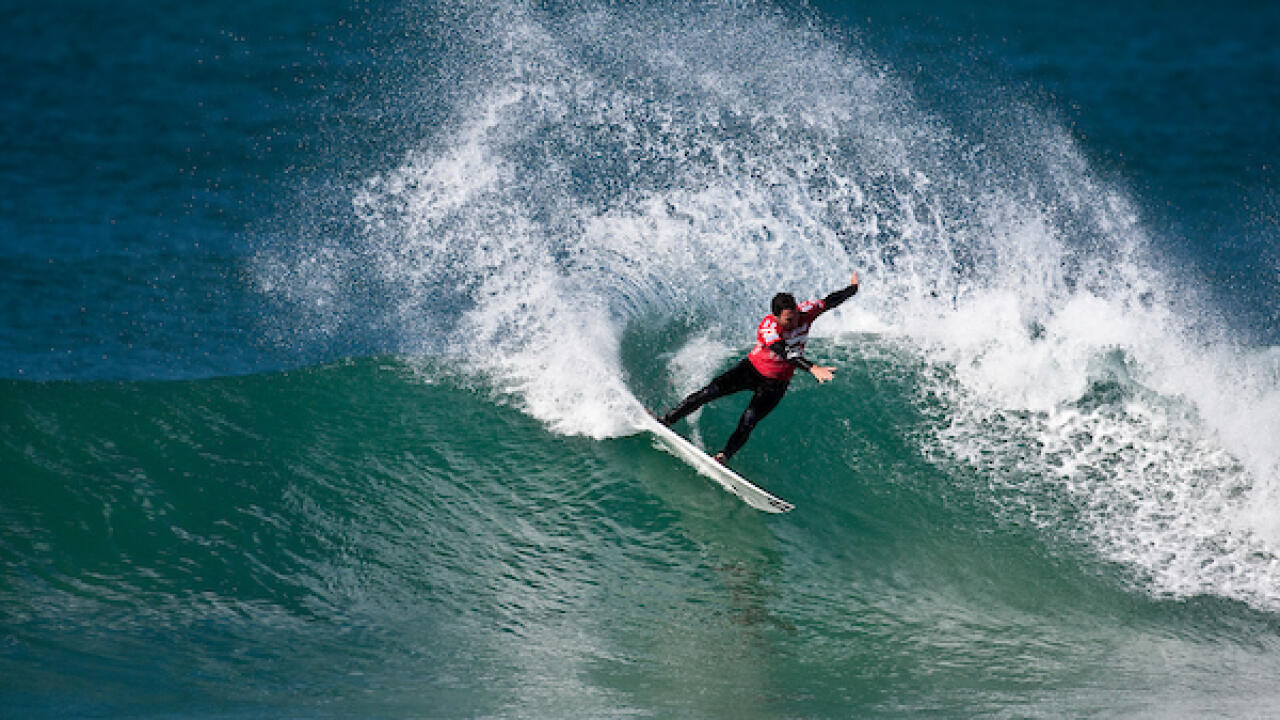 In Pro Surfing contests, a Sponsor's Wildcard is just that -- a Wildcard. At the top level, the way the seeding works is the Top Seed, usually the number one-rated surfer in the world, gets to surf against the Lowest Seed, someone that has low rating points, or even none at all.

All of the big surf Brands have young surfers that they are cultivating as future stars of the sport. Part of this cultivating leads to Wildcard entries into events with an interesting mix of results, especially if the Top Seed is also sponsored by the same company.

Names that jump to my mind straight away are Mick Fanning -- who won his first World Tour Event at Bells Beach as a Wildcard -- as well as Dane Reynolds, who as one of the best free surfers in the world scored a number of wildcard entries into Quiksilver Events. Julian Wilson, as a Junior, also upset many top seeds, while Mikey Wright has taken his explosive free surfing into heats. That's just to name a few -- there's a long list of wildcards causing havoc at CT events.

But probably close to the top of the list is Joel Parkinson's win at the 1999 MSF Billabong Pro J-Bay, South Africa. As an 18 year old Junior, he was given the chance to surf against the World's best when he was granted the Billabong Sponsors Wildcard, which he grabbed with both hands and rode all the way to a victory.

The photo I captured of Parko celebrating his win by ‘walking on water' sums up his youthful exuberation and elation with beating the World's best surfers. Significantly, Jeffreys Bay was his very first CT victory and notably also the location where he announced his Retirement from Professional Surfing in 2018 after 20 years on the tour.

Ball Games On The Grass. A lot of the surfers' accommodation at J-Bay is right in front of the break, or within a few 100 yards of the contest area. The grassed areas in front was the perfect place to hang out and during the extended lay days at the beginning of the 2009 waiting period, and this area turned into an impromptu Football field.

With such a cross section of nationalities amongst the Top 48 surfers, the term ‘football' took on a different meaning depending which country or even which region you came from. The Europeans had a round Soccer ball, some Aussies wanted to play Rugby League, others just Rugby, a couple wanted Australian Rules (AFL) while the Americans wanted Gridiron.

The mix made for some very funny impromptu games of Football with some very loose rules and antics with surfers, coaches, commentators, trainers, even wives and girlfriends all joining in.

The contest media room was right there on the edge of the grassed area, and as soon as a game kicked off the air was filled with yelling and laughter and a signal to us it was time to get off our computers and get outside to watch the action unfold. 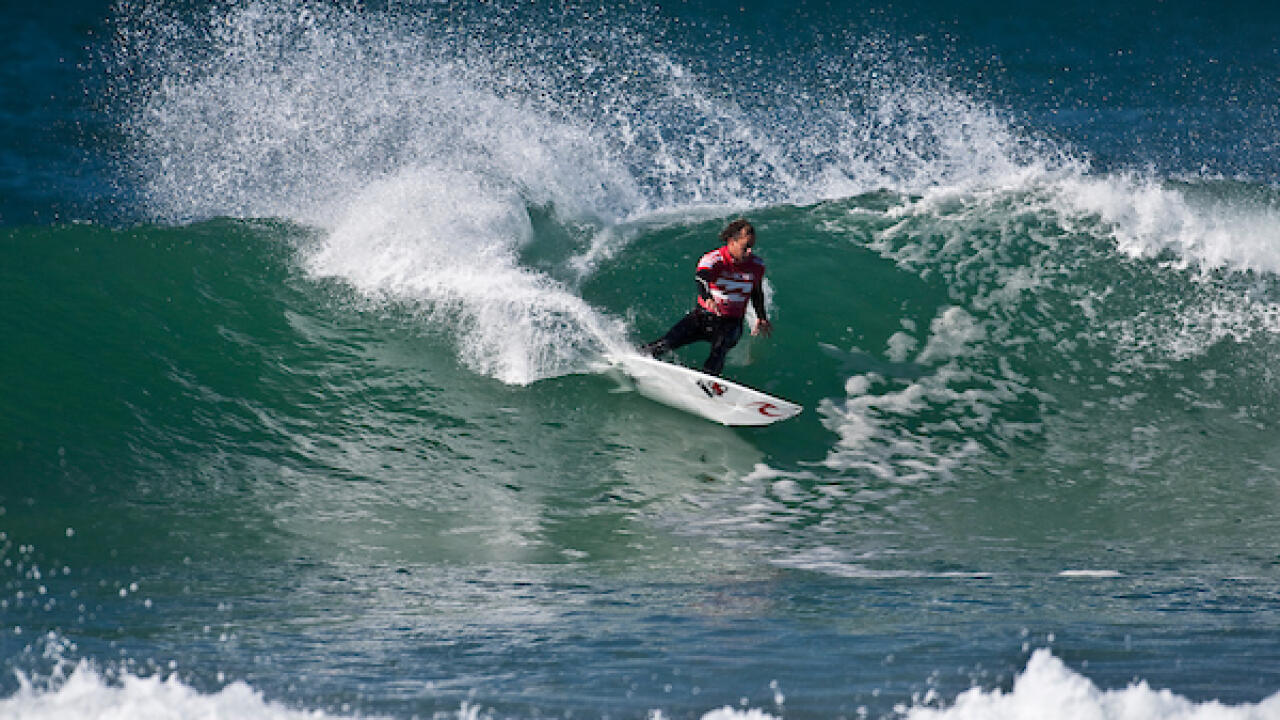 The early contest rivalry between Occy and Tom Curren is legendary.I was lucky enough to shoot one of their all time classic heats during the Rip Curl Pro Event at Bells Beach in 1986. The other classic battles were at Huntington Beach in California, and Jeffreys Bay, back in the early 80's.

The J-Bay heats almost have a mystical status to them, run at the height of their rivalry with Tom's forehand bottom turn and round-house carves vs Occy's back hand bottom turn to top turn combo stirring the imagination.

In 2009, the ASP came up with the concept of a Clash of the Icons and got Occy and Tom back to J-Bay to relive those iconic heats and they didn't disappoint.

It was interesting watching them both prepare, both nervous and both still very competitive in their respective ways. Occy the extrovert and Tom the introvert. Both were ready to compete and neither wanted to lose, especially against each other.

Leading up to the Clash of the Icons they had met 18 times over 23 years with an even head-to-head tally. I was set up to shoot the first heat of the clash mid way down the break, and Tom's wife, Makeira, joined us appearing way more nervous than Tom.

She paced, whistled and talked to herself all the way through the heat and was so relieved when Tom won. When I talked to Tom about his win later I mentioned Maki had been with us on the beach and he asked how she'd been.

When I told him she was so nervous he asked, "Was she whistling?" and I replied "yes" he just laughed and said, "she does it every time". 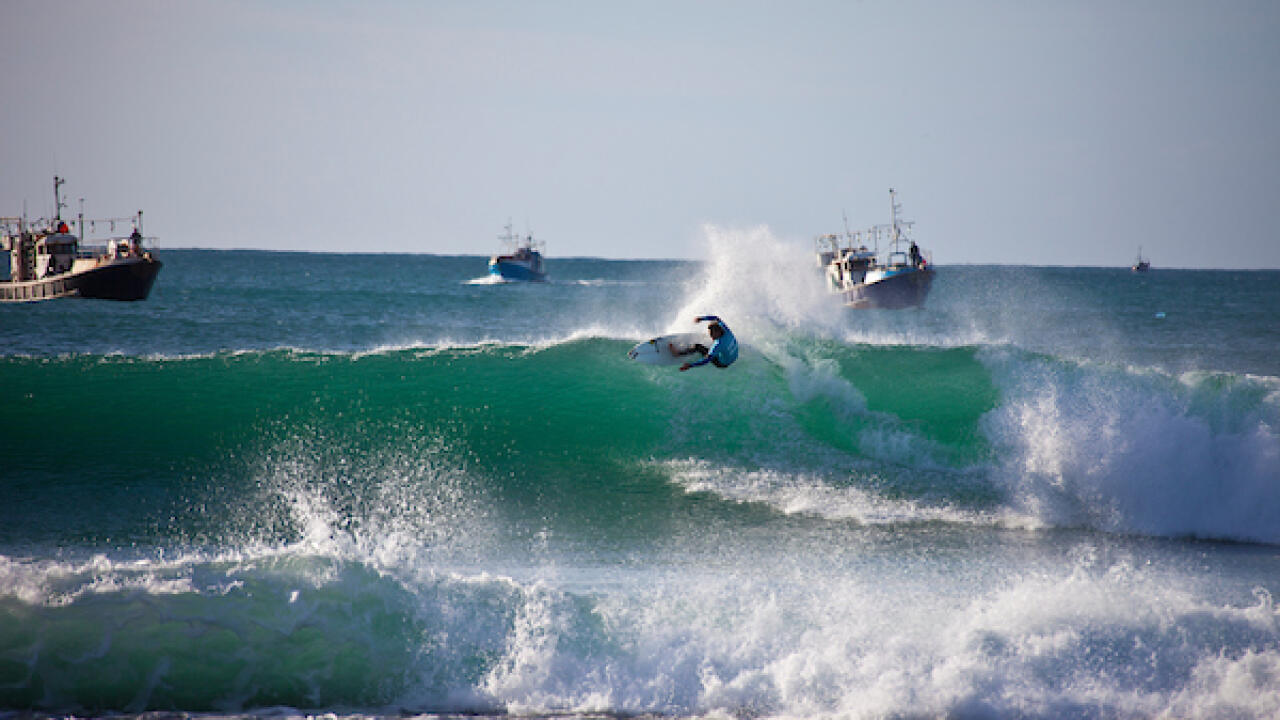 I've already talked about Wildcards at CT Events throwing spanners into the works of a contest. But you can't talk about a Jeffreys Bay event during the first decade or so of the 2000's without mentioning the name of South African surfer Sean Holmes. Definitely a perpetual local favourite, from the small coastal community of Wilderness a couple of hours down the coast from J-Bay.

Holmes was sponsored by Billabong and worked for the company in a marketing role. During these years he earned the tag ‘the best wildcard in the business' at J-Bay, with his reputation for taking out the World's top surfers when the contest rolled into town. In a Wildcard reign of over 10 years that began in 1999, he eliminated Occy in his World Title year, knocked out Andy Irons and ousted Kelly Slater in his World Title run in 2010. 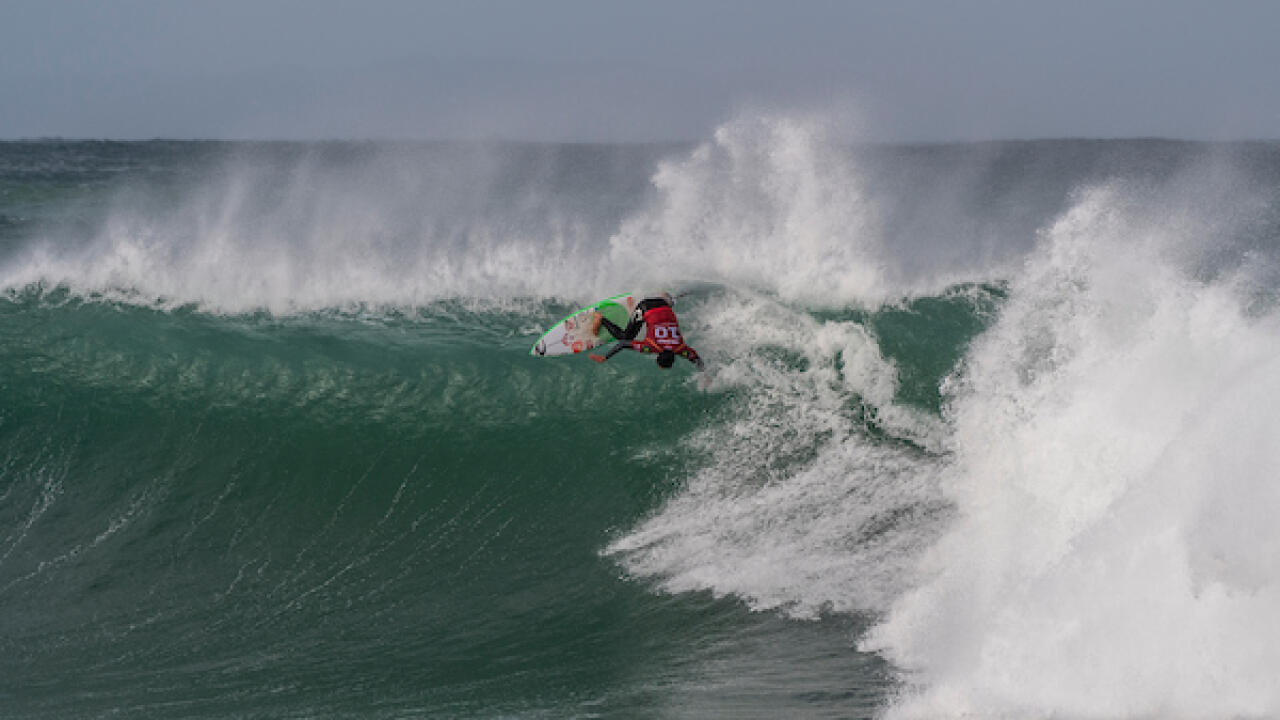 If you had asked me in 2009 which type of surfer was favoured at Supertubes I'd have said, straight up, that it was a natural footers' wave.

I'd qualify that with the exceptions of goofy foot surfers like Occy who just seemed to be able to come square off the bottom and smack it right under the lip on repeat. Michael Lowe and probably Owen Wright followed in Occy's footsteps.

You've only got to look at the Winners list, a lot that I've actually shot and watched firsthand, to see that from the first Billabong Pro in 1996, natural footers have completely dominated.

My thoughts about how to surf Supertubes changed a couple of years ago thanks to Filipe Toledo. I wasn't in J-Bay shooting in 2017 and watched it all go down on the webcast. I sat there screaming at the TV in disbelief of his incredible attack on the wave, both above and below the lip. I did make it there last year when two goofy-footers, Italo and Gabriel, went head to head in the final assuring that finally a goofy footer would have his name on the winners list at J-Bay, something that had taken over 20 years to happen.

I wonder if there's a contest anywhere else in the world that has been dominated by a natural foot or goofy foot in the same way and for so long? 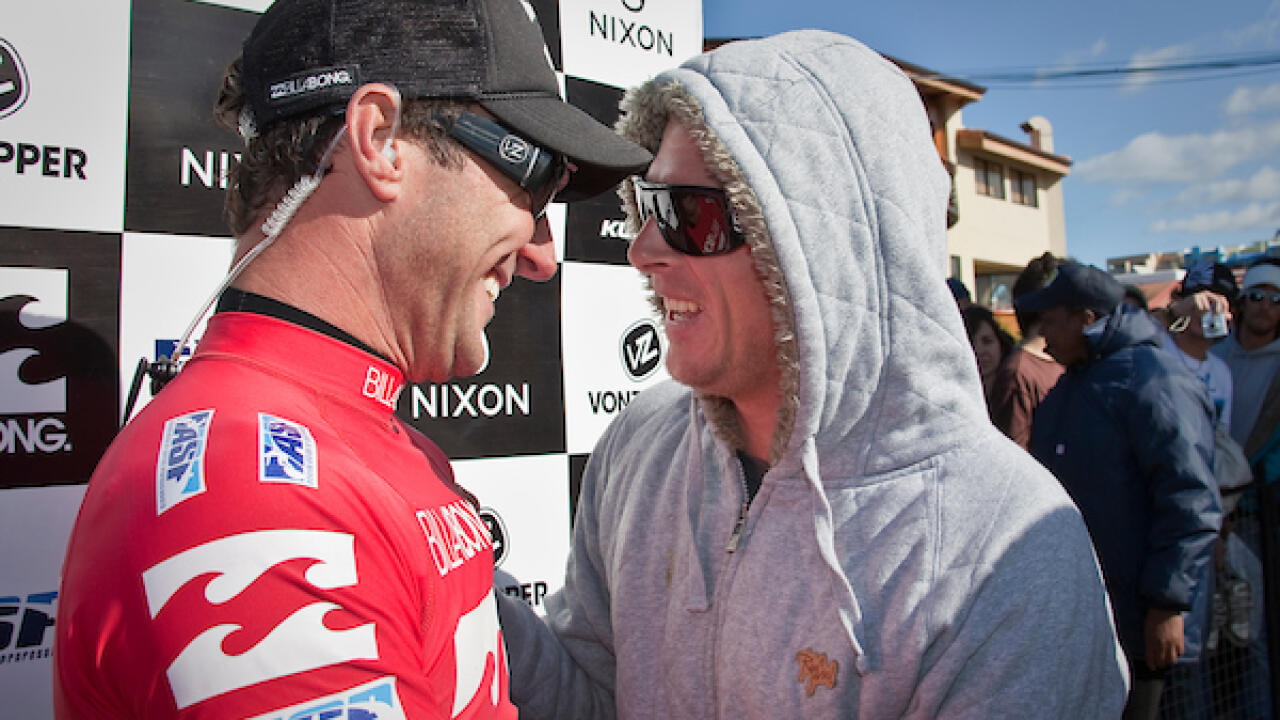 At the end of 2009 I recorded an interview with Mick Fanning after he'd won his 2nd World Title at Pipeline. I asked him about that special moment he'd shared with Parko, straight after Parko won his 4th contest of the year at the Billabong Pro J-Bay, back in July. Mick had been one of the first to congratulate his good mate and I heard him telling him, "One more step mate, just one more step". I asked Mick whether he thought that in J-Bay Joel actually had the 2009 World Title all wrapped up, this was his reply:

"Yeah, definitely! Leading up to that point no one else had even looked like coming close to him."

Within 3 weeks of that moment at J-Bay, the whole year turned upside down for Parko. A serious injury in Bali where he tore ligaments in his ankle practicing air reverses, which was kept very quiet, completely derailed his training and preparations for the second half of the year. While Joel was totally frustrated with the whole injury situation, he watched his good mate win 3 out of the last 4 Events and jump right into World Title contention. The title race went all the way to Pipeline, with Mick on top of the ratings and Joel needing to win the contest to overtake him. In the end, a first round defeat for Joel handed Mick his 2nd World Title. 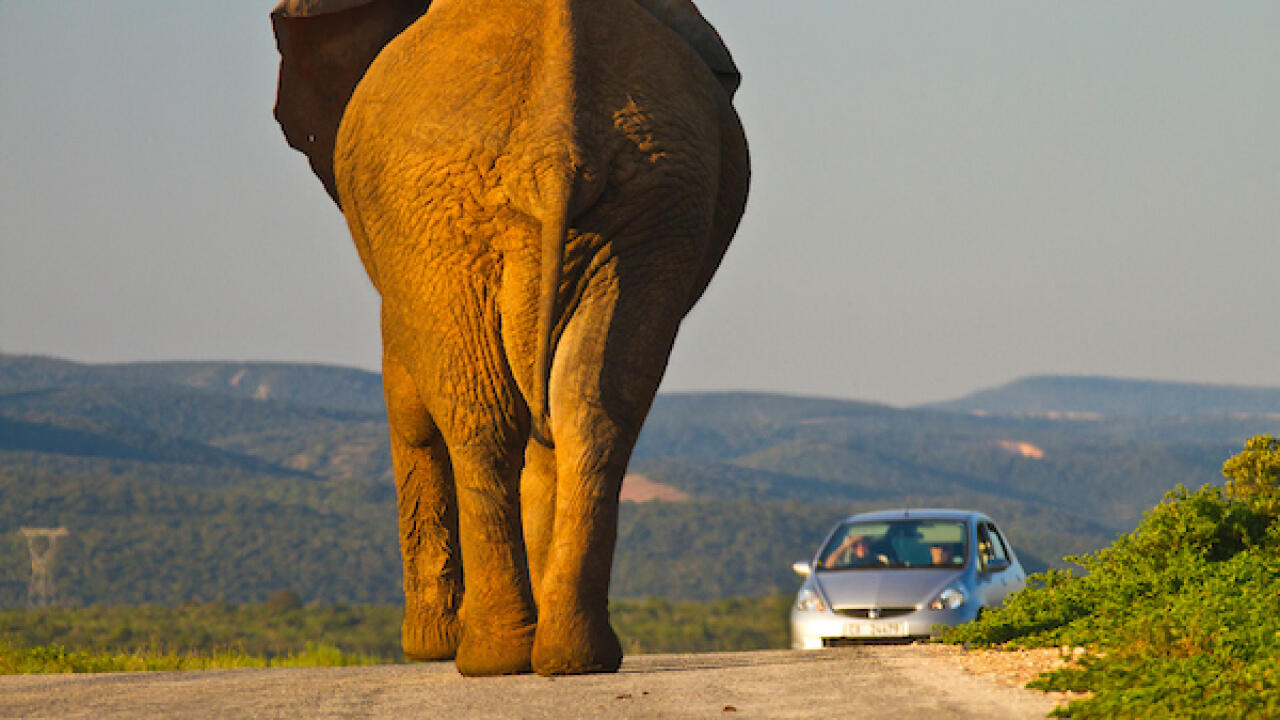 The beginning of the 12 day waiting period for the 2009 Billabong Pro was marked by small, inconsistent surf, and from memory, there were five straight days of no contest. At some contest locations around the world, this can drive crew mad. But there is definitely plenty to see and do. A couple hours down the coast in the Tsitsikamma National Park is the World's highest natural Bungee Jump over the Storm River.

It's a 216-meter high drop, perfect for the guys that want an adrenaline rush. Another rush, on a slightly different level are the Private Game Reserves. Within a hour or so drive are some of Africa's top Game Reserves and National Parks -- places like Shamwari Game Reserve, Addo Elephant Park or Pumba Game Reserve, plus wildlife parks like Seaview Lion Park and Kragga Kamma Game Park, where you can get up close and personal with Lions, Elephants, Rhinos, Giraffes, Zebras, Cheetahs and Hippos.