This article was originally appeared on The Inertia.

On a tidy cul-de-sac in Costa Mesa, California, a white garage door lifts open to a hazy, mid-summer Tuesday morning. The well-appointed neighborhood of single-level homes is quiet, and the open garage draws the attention of a 30-something father pedaling past with his two young daughters. A man has stepped out of the garage, middle-aged, of medium build, fit, with thinning brown hair just graying at the temples. He's holding a surfboard, the deck emblazoned with a bright, red and blue spear-point pattern. More accurately, the man is displaying the board to a second man, who takes it and holds it up to catch the sunlight. This man passes his hand across the deck, back and forth, as if feeling for something.

This is Casey Patelski, whose area of expertise includes developing plastics and engineered polymers specifically for mechanical applications, and kneeboarding the Wedge, in nearby Newport Beach. An odd combination of skills, one might say, except that in Patelski's case these disparate competencies intersect, seeing as how, after decades of producing the sport's most popular kneeboard deck-pads, he has recently developed and patented an innovative, adhesive-backed film for use on conventional surfboard decks that he calls GryptaLite, which is not only tissue thin, light and completely transparent, but provides positive, non-abrasive traction in all water temps. About fu-cking time is right. 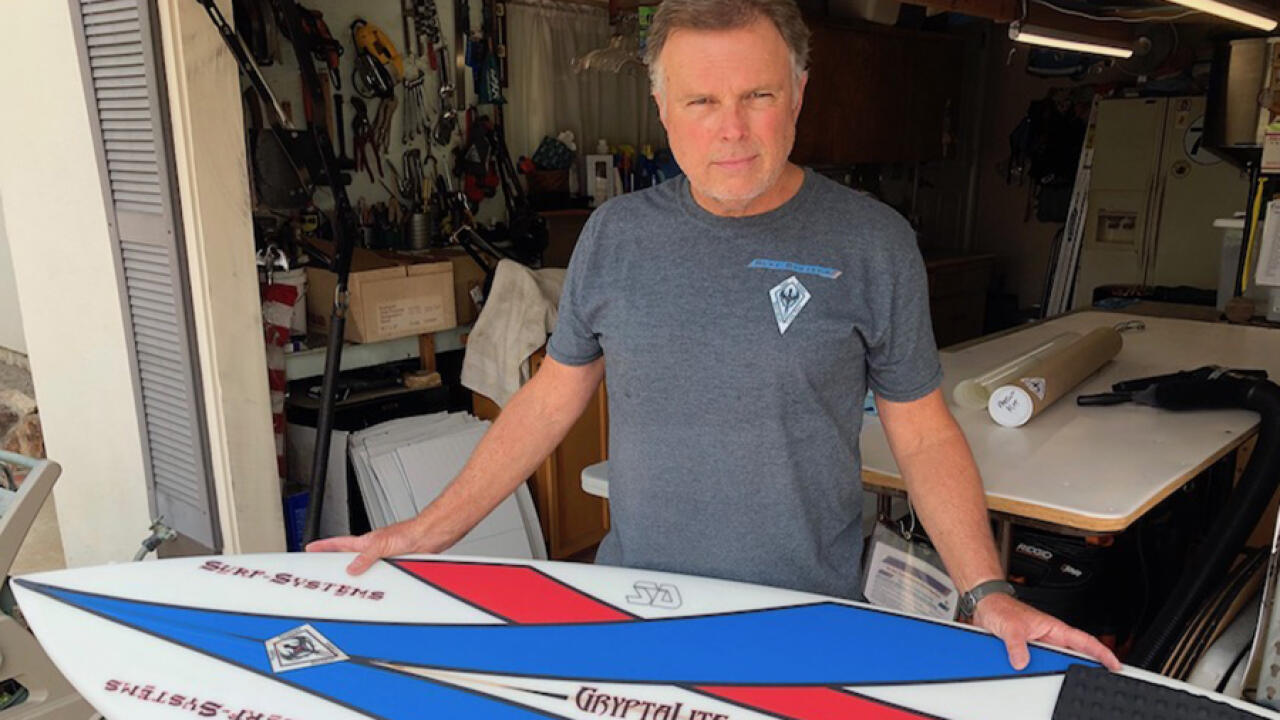 Creditable surf lore tells us that our Polynesian antecedents paid more attention to their surfboard's appearance than to traction. Wrote ethnologist John George Wood in 1868, in his aptly titled (when discussing surfers, at least) The Uncivilized Races of Men in all Countries of the World: "They are slightly convex on both sides, and are kept very smooth, all surf swimmers cherishing pride in the condition of their boards, and taking care to keep them well-polished and continually rubbed with kekui-nut oil."

Small wonder a common 19th Century translation for the Hawaiian term he' nalu was "wave sliding"- try rubbing some suntan oil on your board today and see how well that turns out. But kukui oil was about it until well into the next century, when boards were still made of wood and men (and a few women) were made of iron…and would kick sand onto drying varnish on the decks of their "kook boxes" in an attempt to avoid slipping from stern-to-stem on every drop. Third-degree nipple rash aside, this was a crude solution to the traction problem and it was to the tribe's great relief that in 1935 paraffin wax appeared on the scene, first scrubbed on the deck of a board, according to Matt Warshaw's Encyclopedia of Surfing, by a Palos Verdes teenager named Alfred Gallant.

After first trying floor wax, the open-minded Alfred, reportedly at his mom's suggestion, switched to the paraffin wax she had been using to seal fruit jars. How could he have imagined that those little bumps he raised with his circular strokes would remain the standard of deck traction for the next 85 years? Oh, sure, in 1967 Mike Doyle and the Surf Research team gave us WaxMate, basically just reformulating and adding pleasant scents to existing wax products, and in 1972 Santa Barbara's Frederick Herzog shocked uptight parents everywhere by marketing his tacky discs as "Zog's Sex Wax", but aside from a few minor innovations in composition (warm, cool, cold, tropical) for the better part of a century wax has been wax has been wax. 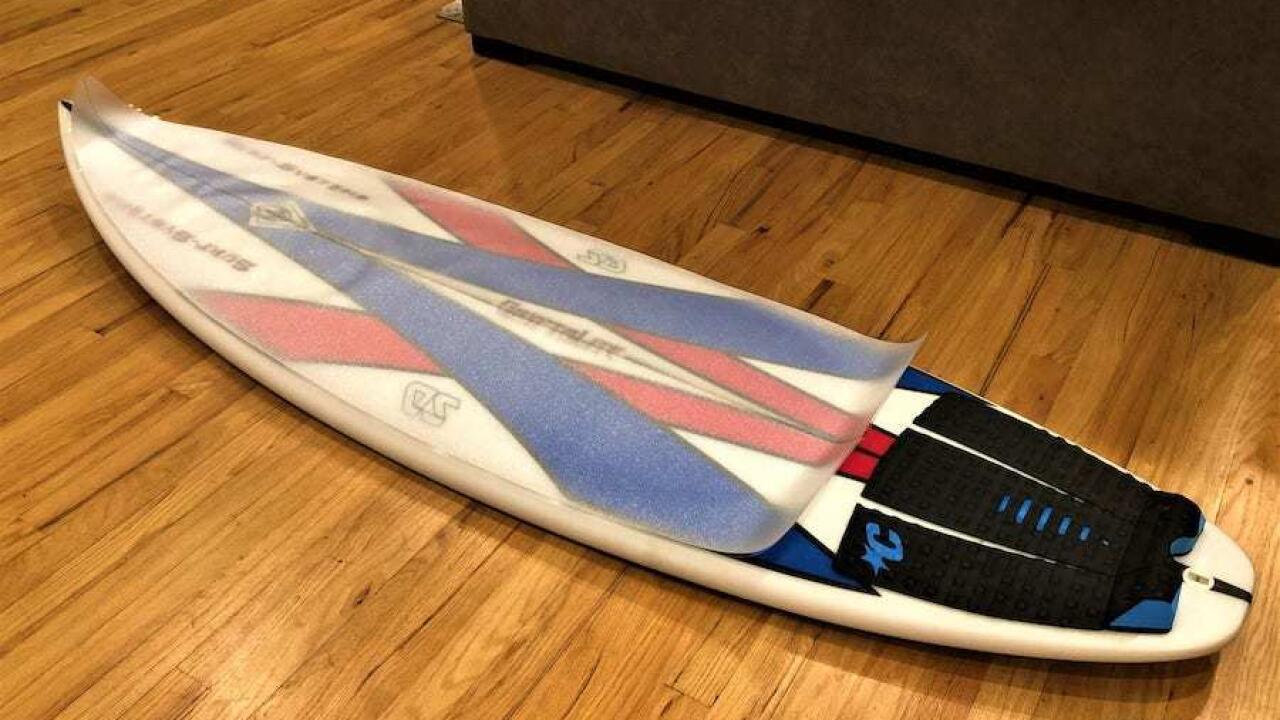 Despite wax's obvious drawbacks (melts, freezes, rashes, ugly) alternatives throughout the decades have been few. In 1965 Ventura surfers Bill Delaney and Bill "Blinky" Hubina, experimenting with highway crosswalk paint, came up with an aerosol deck spray for use on the nose and tail of the period's longboards. Eventually marketed by the Morey-Pope company as SlipCheck, the super-abrasive decking found favor for about three seasons, but disappeared almost overnight with the advent of the "shortboard" in 1968. Then in 1975 a San Clemente surfer named Jim Van Vleck introduced a spray-on urethane coating he called AstroDeck. Easy to put on, the decking never really caught on until the ever-inventive Herbie Fletcher bought the company, switched to a peel-and stick-on version, and the rest, as they say, is history.

For Casey Patelski, that's exactly the point. "Traction is the one area of surfing equipment and accessories that hasn't evolved," says Patelski. "Shaping, fins, boxes, resin and foam systems, they've all continuously evolving. But since AstroDeck was first introduced, nothing's changed. For the past 30 years, at least, all we've had is stick-on tail pads and maybe a small front-foot pad, saw-cut from ethylene vinyl acetate (EVA) foam. That's about it."

That obviously wasn't enough for Patelski. A dedicated kneeboarder since 1970, he later applied his knowledge of "plastics and polymers" to his knee-machine's deck pads, eventually producing the sleek, molded version in use by virtually every hot "kneelo" today (yes, they still exist in small pockets of performance, especially in Australia and South Africa.) Then, in 2017, Patelski turned his attention to the needs of conventional surfers, fine-tuning proprietary manufacturing techniques to develop GryptaLite, a superthin, totally transparent adhesive film pre-cut to exact specifications provided by a phone picture of each individual board.

"Sourcing the clear material was the easiest part," admits Patelski. "The failures came with how the adhesives worked with the film, adhesion being ordinarily a static function, not designed to stand up to the torque of, say, the back foot when doing a turn. Figuring that out involved a lot of testing, improvements in the adhesive and assembly, and then developing equipment modified to existing technology to finally make it all work. It was pure science. And rad science!"

But it's not all science, nor all business (although one look at Patelski's garage, crammed to the gills with decades-worth of old knee-boards, templates, work tables, tools and a big, computerized, space-age machine that spits out custom deck film, it's clear this man means business.) With Patelski there's also a whiff of altruism in this crusade toward getting a better grip on things.

"I just thought I could come up with something better," he says, rubbing the deck of his GryptLite-ed board as lovingly as any ancient Hawaiian. "We've all thought about it. Thinking, like, someone should finally come up with a clear, light, non-abrasive deck that doesn't rub off and works in all temperatures. We've all thought that. Because really, has any surfer ever told you that they loved wax?"

Go to Surf-systems.com more info on GryptaLite traction. If you're looking for a traditional deck pad, try this.