We're only two days into the Championship Tour season, and today at the trials for the Billabong Pipe Masters presented by Hydro Flask we got a reminder that Hawaiian waters run deep and powerful.

Mikey Wright and Leonardo Fioravanti tussled for the last spot on the Championship Tour, while Josh Moniz and Peru's Miguel Tudela charged their way through the Pipe Invitational to earn themselves spots in the main event. From one corner of the Hawaiian Islands to the other, here's how it went down today:

It was a tragic, solemn day at Honolua Bay after a freesurfer was struck by a shark before what would have been Finals Day at the Maui Pro presented by ROXY. Competition was halted until further notice. More to come as things continue to develop, but at this time our thoughts are with the victim and his family and friends. An empty lineup at Honolua Bay for what would have been the Final Day of competition for the first Women's Championship Tour event of the season. - WSL / Keoki Saguibo

Mikey vs. Leo: "We've Been Battling"

In a best-of-three series for the last full-time spot on the Championship Tour, after two hard fought heats today, Wright and Fioravanti found themselves knotted with a win apiece. Their respective fates will be decided in the first heat of the day when competition resumes, potentially tomorrow.

Both surfers petitioned for the 2021 injury wildcard, but with only one spot on Tour, it was decided that the winner of a surf-off at Pipe would ultimately get the nod. Win or lose, both surfers will be surfing in the Pipe Masters as Owen Wright, Mikey's older brother, and Adrian Buchan have both withdrawn from the event.

Joshua Moniz was rolling all day, but when the surf really started cranking during the Final of the Pipe Invitational, he went next level. Tallying a pair of 9.60 rides for a dizzying 19.20 total, he'll now be joining his brother Seth Moniz in the Pipe Masters. There's a long road ahead, but how rad would it be to see them square off for the Pipe Masters crown?

Peruvian Miguel Tudela, who took on some of the heaviest bombs all day long, finished runner-up to earn the second spot into the Masters. Both surfers are going to be tough draws for whoever they face in the main event. Moniz has the family heritage and a lifetime of experience at Pipe, while Tudela is more of an underground threat who is not afraid to go on anything.

Josh Moniz Goes Near Perfect And Earns A Place In The Pipe Masters
1:27
Josh Moniz was rolling all day, but when the surf really started cranking during the Final of the Pipe Invitational, he went next level.

Oh The Places The Webcast Will Go

If you spent some time on the webcast today you may have caught a few guest appearances from the Grinch. As part of Billabong's partnership with Dr. Seuss, he periodically showed up calling sets, heckling and talking trash. We'll see how him and his Seussical buddies factor into the broadcast for the main event, but strange things are afoot in Whoville. 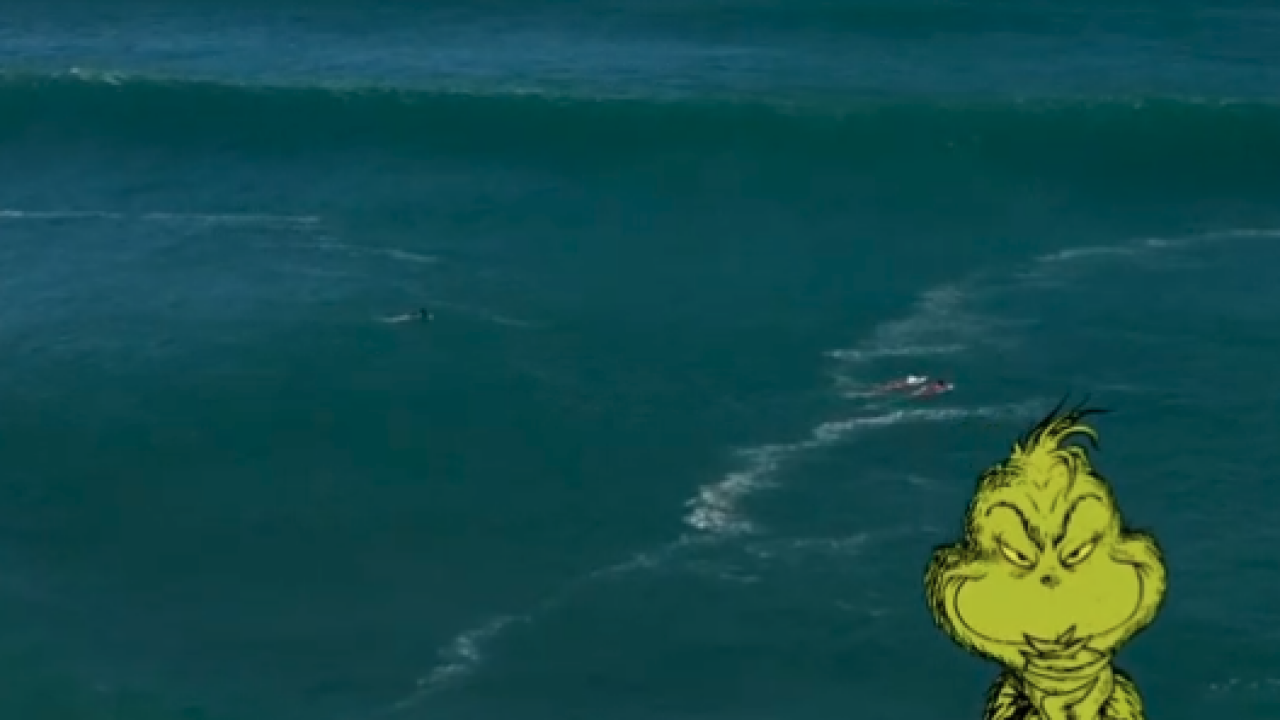 Introducing the Grinch who stole your set wave. - WSL / Billabong

A Moment For Andy Irons

From their earliest days on the beach at Pine Trees on the quiet northern shore of Kauai, Andy and Bruce Irons were always the fiercest of rivals. Call it brotherly contempt. It didn't matter what they were doing, if one of them did something, the other had to push it even further. So, when younger brother Bruce won the Pipe Masters at 21 years old, Andy's trajectory was predetermined.

Andy won the Pipe Masters the following year. And the year after that. Then ticked off two more wins in 2005 and 2006. He also earned three World Titles in that space of time. His bravado and rawness pushed him to the pinnacle of the sport. He was a beast.

When Kelly Slater whispered, "I love you," in his ear, it did nothing but piss him off. When Slater got out to an early lead in the final of the 2006 Pipe Masters Final, possibly the greatest heat ever surfed, Irons roared. Literally. You could hear him screaming obscenities at Slater from the beach. Then he put together an adrenaline-fueled comeback that would have been impossible for any other human.

And now, ten years after his passing, as the Pipe Masters gets set to run for the 50th time, a contest run in his memory and honor, a tip of the cap and salute to the sky to one of the all-time greats. - WSL
Tuesday, December 8, 2020
Josh Moniz Goes Near Perfect And Earns A Place In The Pipe Masters