The movie-version white Christmas full of elves, reeindeer and Santa Clause in the snow may be emblematic of the rugged-up and cosy winter holiday season, but chances are surfers would prefer the Southern Hemisphere version.

While much of the world enjoying the cooler weather indoors with family and friends, Christmas Down Under is a time for warm water, waves and hours at the beach taking stock of the year that was. Nothing says Happy Holidays quite like the color of that water, and tis the season when the lines start rolling in at Burleigh Point. - WSL / Sean Scott

And if you're not at the beach, chances are you're enjoying the sunshine in the backyard with all your family and friends -- probably after a surf in the morning -- with a liberal dosing of beverages and barbeque.

This year there are some locations around Australia which are still dealing with the covid pandemic with social distancing measures, but for much of the country, this Christmas has been the light at the end of a long tunnel they've been looking forward to enjoying with their nearest and dearest. 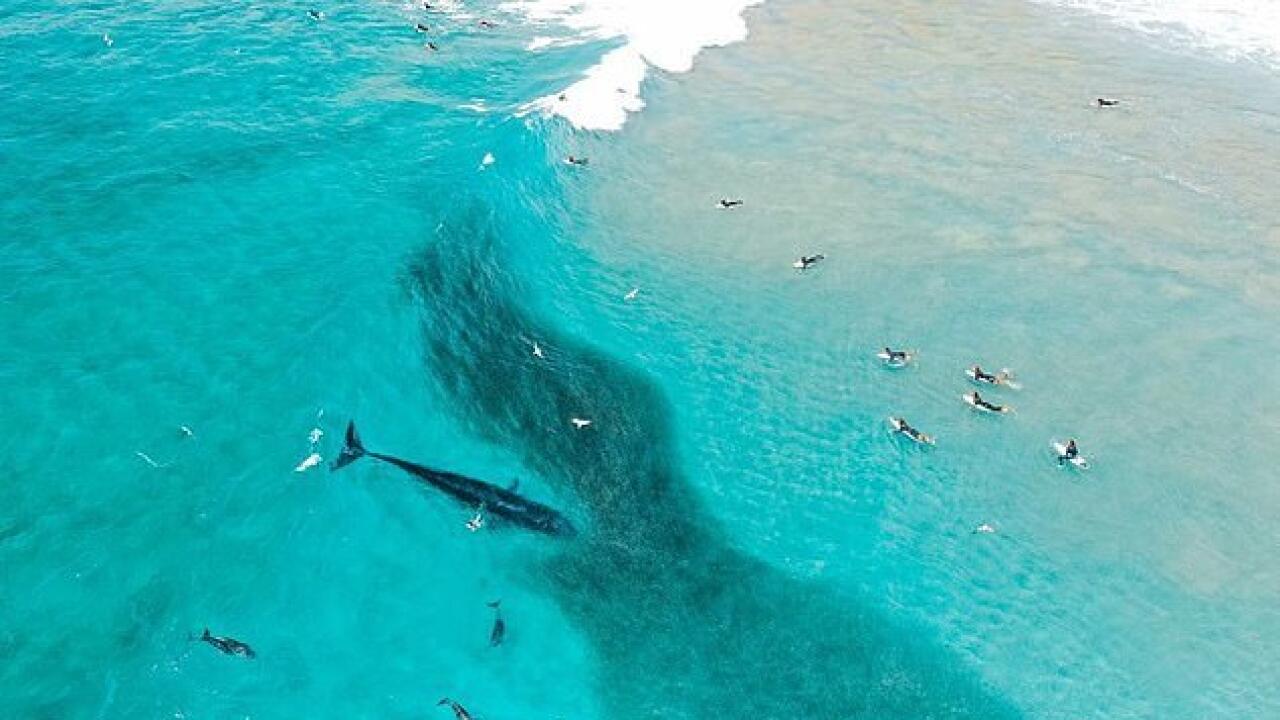 Sharing is caring as a pod of Bryde's Whales drop in for some holiday cheer at Byron Bay. - @ the.drone.dc

Not that the Northern Hemisphere is starved for waves during Winter -- we know that's when the best swell is in town. But there's just something about playful waves, boardshorts, and lazy afternoons in the sun that says it's time to kick back, relax and leave all your worries until next year.

The Australian surfers to be especially jealous of this holidays are the ones in South East Queensland, where an end-of-year break coincides with the beginning of Cyclone Season. This means getting into the spirit -- potentially -- with some of the best pointbreaks in the world, even if said cyclones are likely to ruin the weather for a few days. There's nothing forecast just yet, but it's only a matter of time until they turn on. It's almost time for famous Gold Coast pointbreaks like Snapper to come to life ... a fact not lost on World Champ and new dad Mick Fanning. - WSL / Trent Mitchell

And while some of the Australian surfers on the World Tour will be away from Australia this year, at least they'll be in Hawaii -- where the weather is always gorgeous and and the water is warm -- just like at home, Down Under.

If you can't have a surfers dream' beachside Christmas in Australia -- the Hawaiian version is the next best thing! Tell us what you'd prefer -- cold weather Christmas, or an end-of-year in the sun. Noosa's famed National Park points -- could you think of a better place to post up for the day? - WSL / Ben Osborne